Should You Get an Air Fryer? Here's Why It's Worth It

If the Instant Pot was the must-have kitchen appliance of past years, then the air fryer may be on its way to the same sort of popularity. Since it started to gain traction, the air fryer has become an in-the-know gadget that home chefs are using to create flavorful, golden brown foods more easily than other frying alternatives. But what is an air fryer exactly—and is it worth all the hype?

We are just as curious about the air fryer as you are, and that's why we've looked into what this appliance is, how it works, and what to cook with it so that you can have all the knowledge you need to get started. And once you get the mechanics down, we've also included five healthy air fryer recipes to try that'll help make this appliance prove its spot on your countertop.

Take it from Heidi Larsen of the blog Foodie Crush, whose recipe for chicken tenders is included below. "If you're looking for an even crispier chicken tender that delivers an amazing crunch, then you've gotta try the air fryer," she says.

Read on to learn more about the air fryer, and be among those who embrace this trend as it continues to gain a following.

What Is An Air Fryer?

Nevertheless, there are some downsides. It can be a superfluous investment since the starting cost of air fryers is about $70. If you don't have enough counter space or you already have a convection oven, those are reasons to reconsider, too. But if you're curious about this trend, and you don't mind the cost or space issue, then an air fryer is worth it for its efficiency. 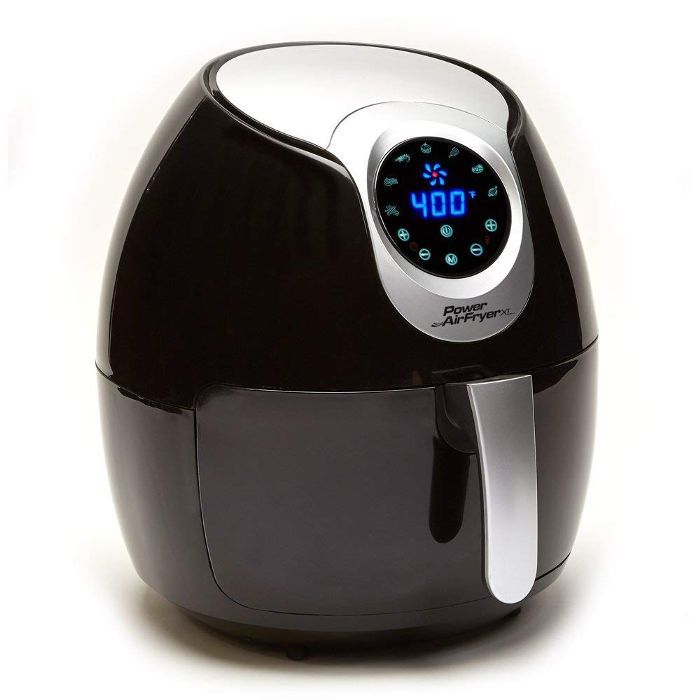 How Does An Air Fryer Work?

When it comes to traditionally frying food, the method goes like this: Pat the food so that it's free of as much moisture as possible, and then dunk it in a pot of very hot oil. The air fryer is different. Because this appliance is using hot air, it doesn't need to rely on as much oil as the traditional method—in fact, usually, just a thin layer of oil will do. Then the hot air is heated up to about 400 degrees Fahrenheit, and the food is placed inside a basket in an even layer. The heat creates a crispy outer layer on the food, which is akin to a "fried" texture, and then a tender inner layer.

It's best to toss the food at least once as it's cooking to ensure that it stays coated in oil. The best foods for an air fryer tend to be what you'd expect—fries, chips, chicken, and other beloved fried foods—but it's also possible to roast vegetables, too. It's also good to know that an air fryer takes some time to get used to since its mechanics are more complicated than tossing food in a pot of oil. But once you get the system down, it can be an easier way to eat these foods.

It's hard to say that an air fryer is healthy since many of the best things to cook in it—like fries and chicken tenders—aren't the best things to order on a menu. Given the traditional frying method, however, air fryers are a healthier option. To make these foods as healthy as possible, try to use thin layers of oil to develop a crisp, and stick to panko over bread crumbs for that outer golden layer. Roasted vegetables will obviously be a healthier choice than fries, too, but stick to sauces that are equally good for you, too. 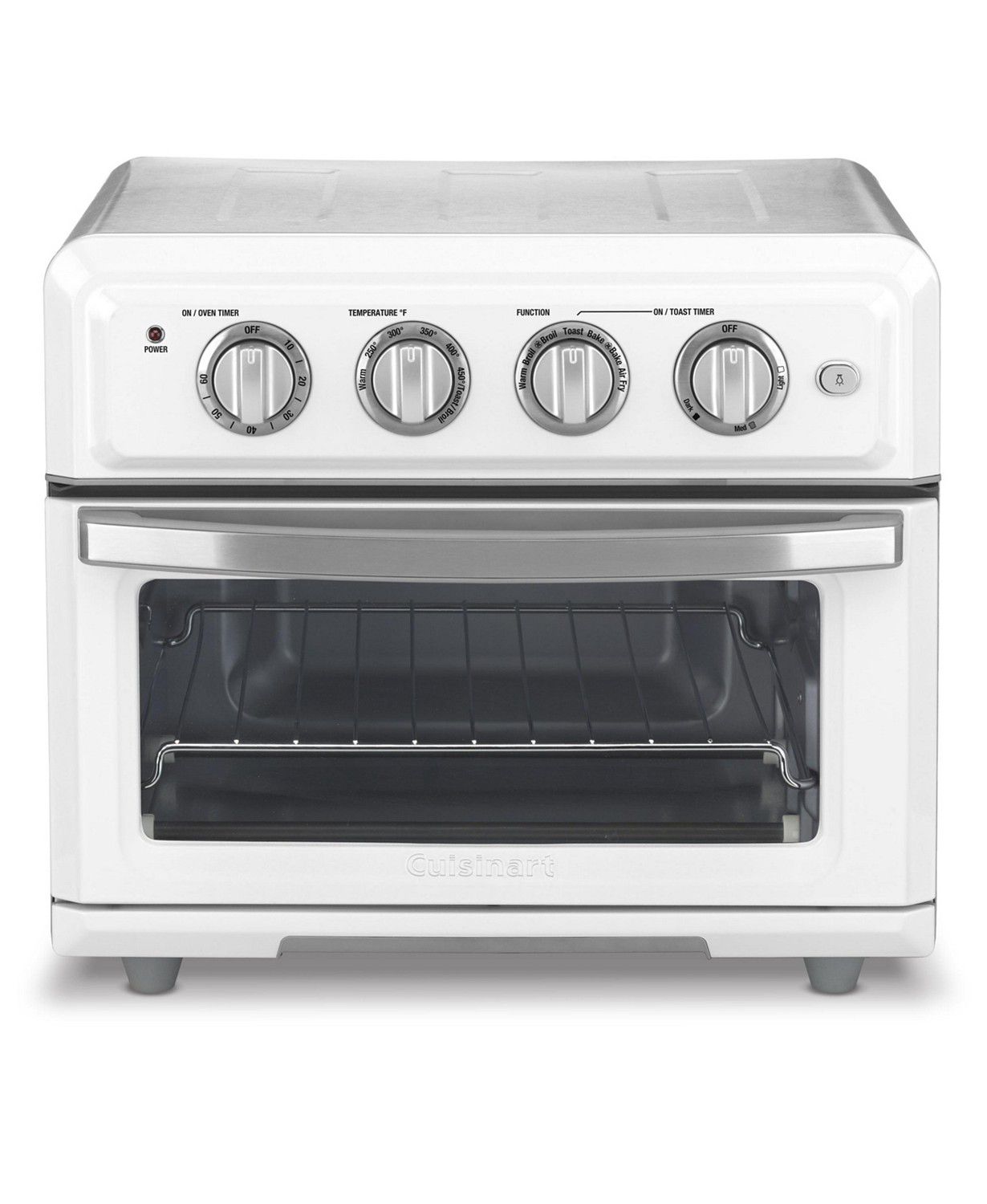 Taylor Kiser of Food Faith Fitness originally made this recipe in 2014 but decided to update it when she started working with an air fryer. She takes a pound of broccoli, cuts it into florets, and tosses them in peanut oil, minced garlic, and sea salt. She pours everything into a single layer in the air fryer, lets it cook, and then adds peanuts, soy sauce, and honey to the mix. "The air fryer makes this broccoli so crispy and golden brown that you are almost not going to be able to handle how delicious it is," she says.

When Heidi Larsen at the Foodie Crush was looking for a healthy way to serve up her kid's favorite chicken tenders, she turned to an air fryer. Unlike the traditional method of cooking this meat in a hot pot of oil, an air fryer crisps the outside and cooks the inside with nothing more than the appliance's clean basket. Larsen trims the fat from the tenders, combines them with an overnight marinade of buttermilk and paprika, tosses them in butter and panko, and then lets the air fryer get to work. "The crunch was unmistakable, and I received so many comments from people saying that in itself sold them on getting an air fryer for themselves," she says. 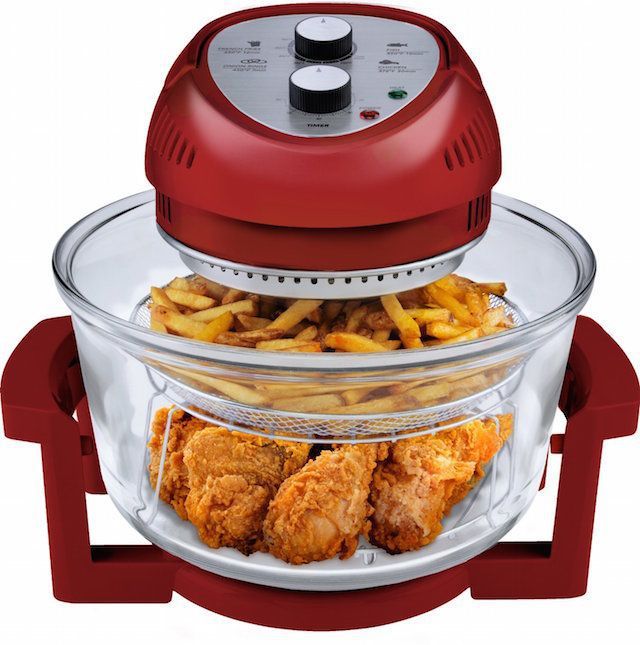 As far as healthy potato chips go, this recipe from Food Faith Fitness might be as good as it gets. Kiser uses one russet potato, which is cut very thinly, and then sprays the air fryer basket with oil. The potato slices are also sprayed with oil and tossed with salt, and then they're cooked until they're just starting to get some color. "It's important not to cook the potatoes until they are totally golden brown, or they'll taste burned," she notes. "Undercooking them slightly and letting them dry overnight yields perfect results."

Looking for a meal you can eat on its own or atop a salad? Then try out this recipe from Food Faith Fitness, which uses an air fryer to make crunchy, flavorful salmon cakes with a handful of ingredients. She starts by placing diced, skinless salmon into a bowl, and then adds mashed avocado, diced cilantro, curry powder, and sea salt. Organic eggs, coconut flakes, tapioca starch, and coconut oil are combined to create the outer crust in the fryer. "Divide the greens between four plates, followed by the salmon cakes. Then garnish the plates with extra cilantro and devour," Kiser advises.

It's easy to think that garlic fries don't really fall under the "healthy" category, but if you have a hankering for them, then making them in an air fryer is the best option. Heidi Larsen at the Foodie Crush has figured out the easiest way to serve these, too, since she uses a bag of frozen fries, layers them in the air fryer to cook, and then tosses them in pressed garlic, minced rosemary, minced parsley, salt, and pepper. "The longer the garlic and rosemary infuse, the more flavor the mixture imparts," she notes.