Ashley Graham's New Backyard Is an Inviting and Lush Oasis 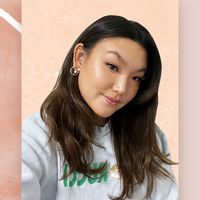 Jane Kim
Jane Kim is an Associate Editor at MyDomaine and has covered an array of topics in lifestyle, fashion, and beauty. She earned a B.A. in English from Stony Brook University.
MyDomaine's Editorial Guidelines

When Ashley Graham and her husband, Justin Ervin, moved into their new home, they knew they wanted their children to grow up in a place where they could easily play in a yard and they, too, could take a moment to step back and relax.

Graham had lived in New York City for a big part of her life, but also created memorable milestones of falling in love, getting married, starting a family, and running an entire business in the Big Apple. "Everything was there for us, our family. But we were like, we have three children. We have three children. And that's what we kept going back to," says Graham.

So Graham teamed up with designer Mikel Welch to design Graham's dream backyard complemented by neutral tones and lush greenery. The goal? A welcoming space where Graham could host intimate gatherings and allow her kids to create similar childhood memories just as she did.

With Welch's expertise in modern design and Graham's future plans of hosting, the backyard was transformed into a casual oasis where people could comfortably walk through the lavish greenery and make themselves at home. From the cozy couch with an endless number of pillows to the pool area being lined with beautiful, clean deck chairs, the inviting environment reflects Graham's endearing personality.

Growing up in Nebraska, playing corn hole was a big part of Graham's life.  So it was only fitting for Welch to add a corn hole board and mini section for the kids which includes small chairs and a picnic area, so the tradition could be passed down. "Justin and I were both raised in the suburbs, so we know the value that comes with creating a comfortable space for the kids," says Graham.

The process was made all the more easy thanks to Affirm.

Affirm gives users a choice to pay for their home purchases in installments, so they don't have to feel pressured to pay for everything all at once. "Affirm is a great way to get what you want when you want it without breaking your bank," says Graham. "There are some big purchases that people are making, and you want to be able to do it without the stress that comes with having to pay a lump sum right away. So Affirm makes it easy for you to do that."

With Affirm's vendors like Pottery Barn, West Elm, and Amazon, Welch had an array of options to bring the duo's monochromatic vision to life. Welch emphasizes the importance of buying pieces that you genuinely love because it'll last longer in your home instead of settling for an alternative that isn't to your liking. He encourages new-home owners or renovators to be more thoughtful with their purchases and use Affirm if needed, so they don't have to feel like they are sacrificing their design choices.

"Buy those pieces with Affirm and spread that cost, so you can pay it over time and you'll be good to go, but get what you really love," says Welch. "If not, you're going to have buyer’s remorse in the end and be upset with yourself."

Welch wants people to step outside of their box and get inspired by design. "The design world is meant for us to play and take risks and to take challenges," says Welch. "Anytime you have an opportunity to do so, you’ve just got to do it."

Although Welch describes himself as the "king of neutrals," he highlights that using a neutral palette requires a layering method where various textures are used to create an illusion of depth, or else the space may look flat. Other key factors Welch had to take into consideration was Graham's love to entertain guests and her three kids. Graham relayed that she wanted her kids to feel part of the design while simultaneously fitting her personal sophisticated style.

"I wanted to make sure that it just felt homey and cozy because that's the energy that Dustin and I bring when you come into our home," says Graham. "I wanted that same feeling outside."

As summer approaches, Graham looks forward to spending quality time with her family catching frogs in their backyard.

"We're sitting outside and we're looking at almost two and a half acres, and we're like, wow, this is ours," says Graham. "We're not only proud of ourselves, but we have this moment to really just exhale. The city can bring so much joy and excitement, but with three kids, we have enough joy and excitement. We need some relaxation."