written by
Hallie Gould
Hallie has worked in beauty editorial for eight years and has been a senior editor at Byrdie since 2016.
MyDomaine's Editorial Guidelines
Hallie Gould

I recently found myself at a crossroads: I had been doing my body-loving thing for six months, and I was feeling really good—until I wasn’t. I had toned up by making really small, easy-to-follow changes to my diet and exercise routines. Suddenly I realized some of the weight had crept back along my waistline and my diet wasn’t as clean as it once was. It sucked; I felt totally stuck. But I wasn’t willing to let it all go to waste (or to my waist, in this case). I had been so happy, as I finally felt the way I looked reflected the way I felt. So I decided to bring out the big guns.

That meant contacting Dr. Charles Passler, a notable nutritionist in the industry who boasted incredible results with models and celebrities alike. I made an appointment and was immediately nervous—I was wading into unchartered territory. Usually, I stick to a “don’t be too hard on yourself” kind of attitude when it comes to my diet, but this detox sounded hard and limiting. If you look at Dr. Passler’s roster of clients, though, it obviously worked.

Why I'm Doing This

I’m not a model. I’m not a 19-year-old member of the Hadid family or someone who cares to maintain a sample size. But I was interested in preserving the euphoria that came along with the change I’d worked so hard for. So I made the call.

Dr. Passler was really nice, knowledgeable, and more relatable than I expected. He didn’t reprimand me when I mentioned my favorite foods were pizza and dumplings. He did, however, ask about my love life. He said, “Have you ever been in a relationship that was bad for you?” Check, I thought. “And,” he continued, “did you stay in that relationship for longer than you should have because it was easier than dealing with the feelings that would come afterward?” Check, check.

The comparison he was making was a good one. I knew my relationship with unhealthy food wasn’t valuable. It’s the relationship you form with clean foods that should be sustainable and long-term, just like the right partner. Honestly, I thought, this guy should be a motivational speaker.

We went through the program—I go into more detail about that below—and with each step, Dr. Passler had more and more valuable insight to share. “It’s all about feeling good,” he asserted. “Weight loss does happen, but the majority of my patients stay on their personalized programs because of how much better they feel.”

Each patient goes through a series of tests and questions so that Dr. Passler can prescribe a bespoke plan based on their body and needs. I imagine my program is quite different from that of Bella Hadid, but that’s life.

He really does work hard to make sure you’re healthy but also happy—which I think is why he’s so special in the industry. It’s not just about steamed vegetables and a tablespoon of olive oil (though that is part of it). The long-term plans are for your well-being, whether that means an extra cheat day or what have you.

Without further ado, keep reading for everything that happened during my weeklong detox.

We’re constantly surrounded by toxins and other compounds that are harmful to us. It’s not only in the air we breathe; it’s also in the products we apply to our skin and the processed foods we eat. Dr. Passler explained that over time, the accumulated toxins can have a negative effect on our well-being. When you cleanse, it increases your ability to detoxify and reset your daily relationship with your food choices. “When you adjust your focus to accept one what’s good for your body,” Dr. Passler says, “the condition of your skin, hair, eyes, nails, and even your mental attitude improve.” He continued, “You’ll wake up in the morning feeling more refreshed without having to rely on caffeine to get your day going.” No coffee? I practically yelped. There’s nothing more important to my daily productivity than a freshly brewed cup. But I was doing this for a reason, I reminded myself, so I kept listening.

Everybody is constantly saying “I need to detox this” and “I need to detox that,” but it was still a bit of a mystery to me what that actually meant. Dr. Passler put it plainly: “The toxins and chemicals that work against your physical, mental, and emotional well-being are removed from your system.” It’s in an effort to feel more energetic with improved body chemistry, better sleep patterns, and decreased food cravings. At the end of the detox (mine was only seven days but you can go for a full 21), you’ll have improved body composition, with decreased fat and a better balance of water and muscle.

It all sounds so clinical, but it’s really true. The program is a 360-degree plan to better your life, not just your body. By following through on cleaner, long-term eating habits, you’ll just feel better.

What's in the Box

Miraculously, the box delivered provides everything I was meant to consume for the next week—with the exception of water and vegetables. As I unpacked it, I took note of everything I’d be dealing with. The package includes 14 servings of the Lean Body Protein Shake, an easily absorbed, hypoallergenic mix of protein and amino acids to provide core nutrients your body needs to establish overall health. Plus, it allows for you to be on a lower-calorie program (believe me, I was) and not lose muscle. It came with its own to-go shaker cup too! With those came conveniently packaged supplements to provide the nutrients necessary to improve liver and kidney function and support overall cellular detoxification. It also contains a fish-oil formula to support mental and emotional well-being, as well as hair skin and nail health. (Those were my favorite part.) 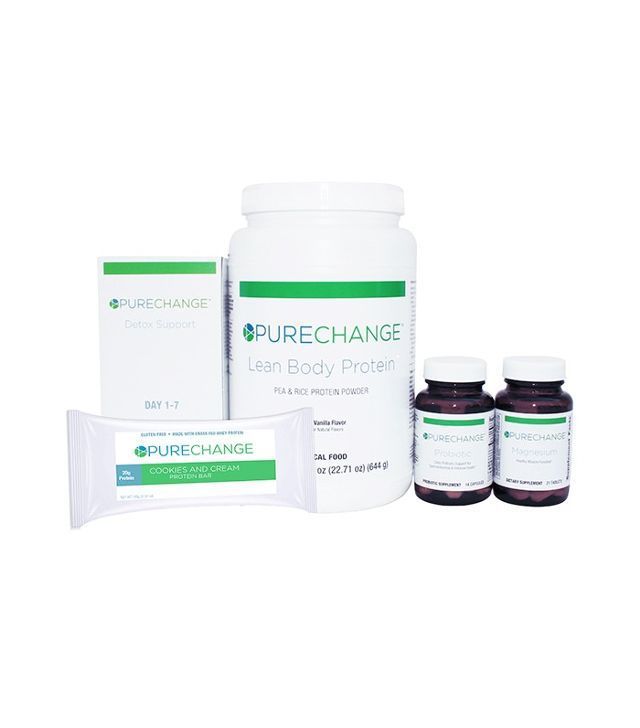 Next were the protein bars: They’re designed to provide 20 grams of grass-fed whey protein in a formula developed to maintain blood-sugar balance and to satiate your ever-present desire for sweets. They come in a delightful range of Double Chocolate Chip, Chocolate Chip Cookie Dough, and Cookies and Cream.

Then more supplements. Dr. Passler provided a probiotic to support digestion and the immune system, as well as magnesium for relaxation, sleep, bowel motility, and healthy muscle function. Gut health, Dr. Passler insisted, is one of the most important things. So I was really into the pills. And I really liked saying gut health a lot throughout the entire week.

It was difficult for me to stay super regimented—eating every two-and-a-half hours on the dot is definitely not in my usual schedule. Before, I would skip breakfast, guzzle a large cup of coffee, and hit the salad bar at about 2 p.m. (to miss the lunch lines). Then, I’d perhaps snack on some of the healthy or not-so-healthy foods we keep stocked in the office. After work, I like to spend time with friends because FOMO and such, so I’d usually have a beer or two and some dinner out. That life is not on the Passler program. I knew going into this I was going to have to make some definite changes, and perhaps sacrifices, for the good of my body (and this story). Dr. Passler suggested a 10 p.m. bedtime—I’m usually working at the office or from my couch until about 8 or 9 p.m. and socializing or watching television until 1 a.m.

On the first day, I slipped. I had a hard time during the day (all I wanted was a Chipotle burrito), and I had forgotten about the plans I made with my friend. It was a belated birthday dinner, so I stuck to the program the entire day and then gorged on delicious pasta by night. Fail. Sorry, Dr. P.

The next day went a lot smoother. I had gotten a restful night’s sleep (and no cocktails at dinner), so I felt strong and on track. Okay, I can do this, I thought. That feeling lasted through the next day when I decided to get an arugula salad with (literally) only one tablespoon of olive oil mixed in with the lemon. It wasn’t my usual spicy Caesar, but it was palatable.

Another thing that became incredibly apparent during the week was how often I have to eat and drink for work. There are events almost every night with champagne flowing and breakfasts scheduled with press reps in the morning. I canceled on a few and rescheduled for a time when I could eat hash browns and omelets brimming with cheese in peace. But I digress; I did have a few flutes of prosecco at an event for Urban Decay. Ruby Rose was there, after all. You can’t blame a girl for that.

By the end of the week, I had gotten a rhythm down and actually enjoyed washing down half a protein bar with a chocolaty protein shake. They really don’t taste bad at all. My only critique is the saccharine nature of both; I prefer savory over sweet, and I didn’t want to feel like I was eating dessert all day. But that’s a personal preference, and they were ultimately really satisfying.

When I was told I could eat vegetables, never did it cross my mind that it wasn’t all vegetables. A list was sent to me of the approved foods, but luckily all my favorites were represented. The Pure Change program allows for arugula, asparagus, broccoli, Brussels sprouts, cucumbers, eggplants, kale, mushroom, chopped onions, romaine, snow peas, sugar-free salsa, tomatoes, and zucchini (among a few others).

The results were honestly pretty astounding. By the end of the week, I felt really accomplished, but more than that, I felt better and healthier than I had felt in a long time. I lost five pounds total but gained a ton of perspective. It was truly difficult (I love my fatty foods), but taking that time away from indulgences did force me to realize I don’t need them. Ultimately, it is important for me to have days where I can eat out, stay up late, and drink a cocktail or two. But the choice is easier to turn down now that I’ve been successful at it. I won’t be miserable if I skip that extra slice of pizza. I will, however, be miserable if I don’t stay healthy and keep feeling like I’m putting my wellness first.