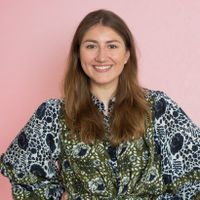 At the risk of being dramatic, my heart was low-key broken when I learned I wasn’t allowed to repaint my new apartment’s walls.

You see, I spent five years in an Upper West Side studio apartment with anxiety-inducing white walls. So, when I packed my bags and headed to my new home in San Francisco, I was ready for a new hue. (And who knows? Maybe even some temporary wallpaper to boot.)

I know most people consider the act of watching paint dry tedious and boring, but it one was of the unglamorous parts of decorating that I was actually looking forward to. I was secretly excited to swatch up my walls. I wanted to flex my design muscles and make the space feel personalized.

Unfortunately, that's not how it all worked out.

“Don’t worry,” our landlord told me, “we’ll be repainting the apartment before you move in.”

In my mind, that was code for another stark white. However, I was pleasantly surprised when I learned my landlord selected Benjamin Moore’s Silver Lake for my new living and dining room.

If you have yet to memorize every single paint swatch at the hardware store (I don’t blame you), allow me to break it down for you. Silver Lake is part of Benjamin Moore’s Classic Collection, which has 1,680 inspired hues that can withstand the test of time. As a light gray with warm blue undertones, Silver Lake strikes a healthy balance between being subtle and making a statement.

And, after a few weeks of living with Silver Lake walls, I’m convinced it’s the best neutral out there. In fact, I squealed with excitement when I received images of the new paint job prior to moving in.

One of the biggest problems I had with my former apartment’s crisp white walls was that they would show every single scuff or handprint. (Believe me, I spent more time cleaning my walls than I’d like to admit.) While I’ve only spent a few weeks in my apartment, Silver Lake does a great job of masking any cracks or imperfections in the wall. Instead of spending an ungodly amount of time scrubbing my walls, I have a feeling I’ll be able to kick back, relax, and enjoy the view.

But what I like the most about Silver Lake is how great it looks in my apartment. Since it’s more nuanced than typical white walls, it adds some warmth to my space and pops nicely against the white molding and built-ins.

But unlike some colors, which can dominate the space, Silver Lake doesn’t detract from my décor. I’ve actually found the light gray looks great with cool colors, warm tones, and, yes, other neutrals. And regardless of the time, Silver Lake makes the space look light, airy, and oh-so-dreamy.

While I was initially bummed about not being able to paint my walls, my disappointment quickly turned into excitement. If it were up to me, there’s a good chance I would’ve picked a similar hue. Turns out, I got the walls of my dreams—all without swatching and watching paint dry.

These Are the 12 Best Light Gray Paint Colors for Any Room, According to Designers