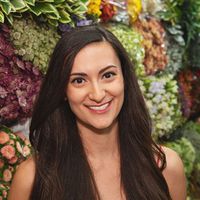 Jamie Cuccinelli
Jamie Cuccinelli is an experienced writer and editor of 10 years, specializing in beauty and lifestyle content and products. She has appeared in many publications such as Brides, Today, and Bustle.
MyDomaine's Editorial Guidelines

Let’s take it back to the basics—the bedding basics, to be more specific. On your list of bedtime must-haves, right up there next to soft sheets and a comfy pillow, should be a duvet cover that’s equal parts snuggly and stylish.

In case you need to study up on your sleep staples, a duvet cover envelopes your duvet insert providing both comfort and protection. Unlike many comforters, most duvet covers are machine washable and they can easily be swapped out without having to splurge on an entirely new comforter or quilt. If you snag yourself a duvet cover that boasts timeless style and durability, though, hopefully you won’t ever want to!

With an array of fabrics, colors, and patterns to choose from, we did some major digging. Here, the best duvet covers out there. 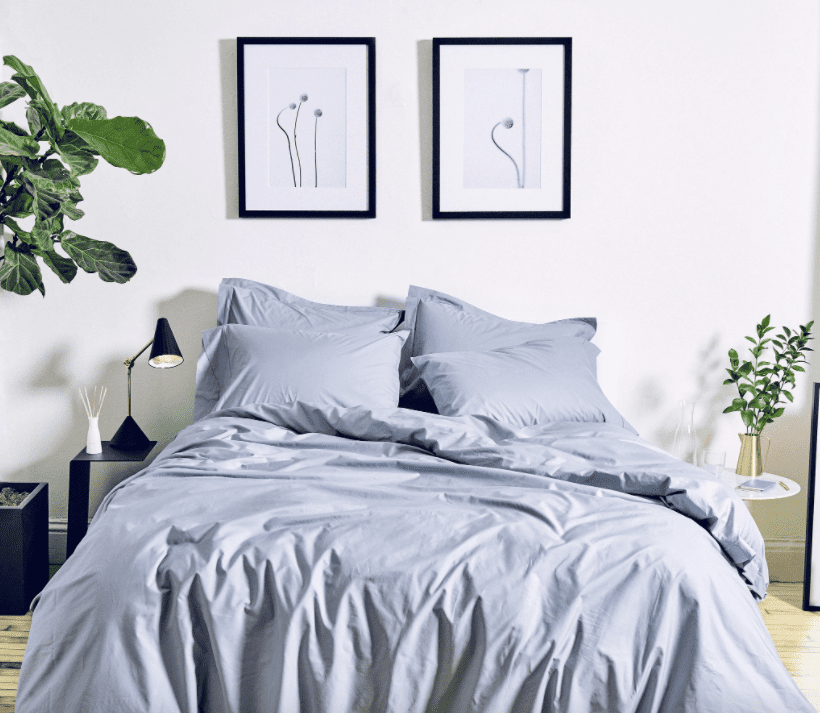 With a plush, cloud-like feel and five soft colorways (think: blush, slate, and ivory, for starters), Snowe's Percale Duvet Cover is an instant classic. While reminiscent of the crisp, high-end bedding you’d find in a luxury hotel room, it’s perfect for everyday use being that it features an impressive 500-thread-count percale weave and Egyptian cotton, so it’s blessedly breathable and lightweight.

Even with that level of quality, it’s still machine washable (you can even throw it in the dryer) for no-stress laundry days. When you’re ready to make your bed, lock in your duvet insert with the cover’s hidden rubber button closure and four interior ties which hold it in place. 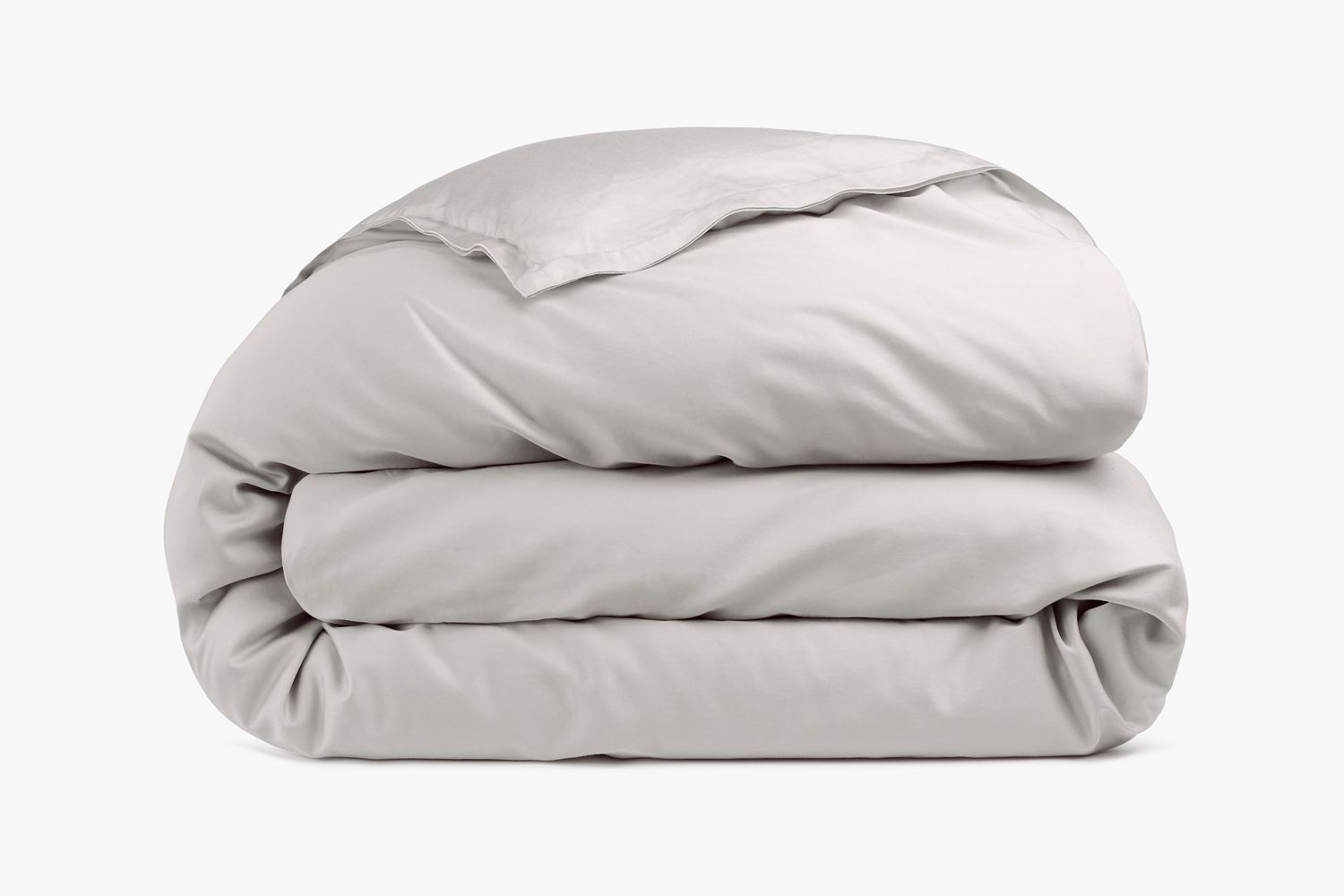 View On Parachute View On Zola

If you prefer the subtle sheen of sateen fabric, you'll find a friend in Parachute's duvet cover which is woven from plush, 100 percent Egyptian cotton that only gets softer over time. With twill ties in all four corners of the cover, keeping your duvet insert in place is also much easier than usual.

If you’re into one-stop shopping, we recommend snagging the entire sateen set which comes complete with one duvet cover and a pair of shams. The set is available in four colors, but we're particularly enamored with the sand and light grey hues. If you're in need of sheets, you also can't go wrong with any of the brand's offerings.

The MyDomaine Guide to Shopping at Parachute 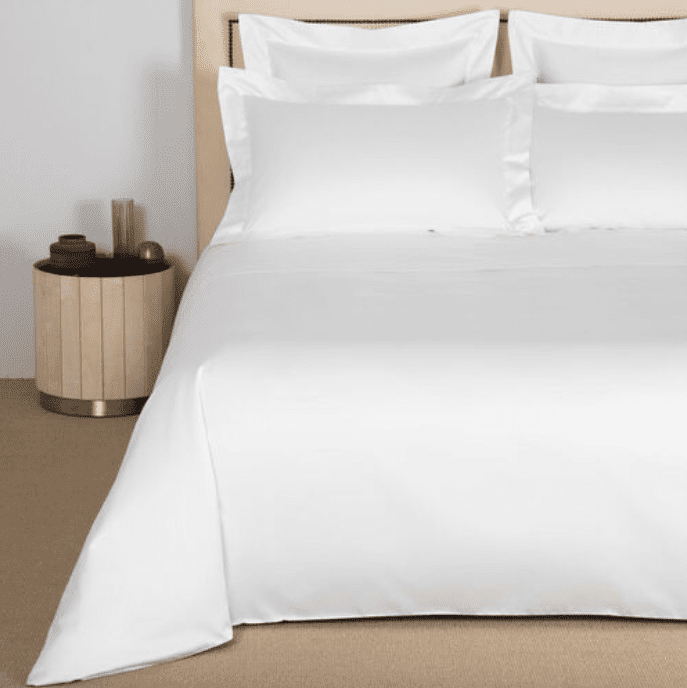 Okay, okay—we know this duvet cover totes a sky-high price tag. But trust us when we say that its moniker, the “ultimate” duvet cover, couldn’t be more true. First and foremost, it’s constructed from Giza 45—the highest-grade Egyptian cotton on the market—which delivers an opulent, satiny smooth feel.

Secondly, we have to talk about thread count. For bedding beginners, thread count is the number of threads woven together per square inch. While not the only factor at play, a general rule of thumb is that the higher the thread count, the softer and more durable the fabric. While you’ll often see bedding with 200 to 300 thread counts, this duvet cover features a jaw-dropping 1,000. And for that, it's certainly worth the splurge. 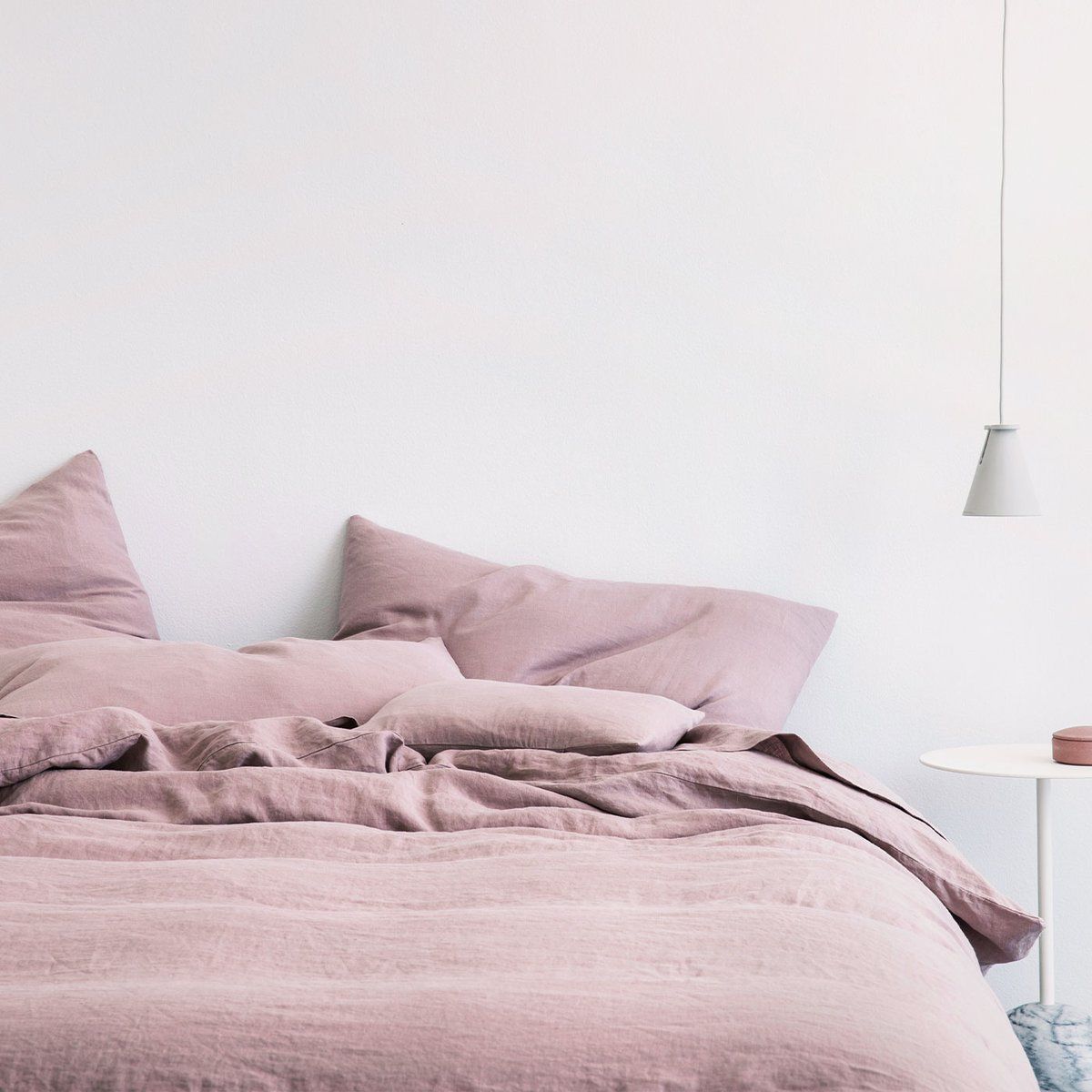 If you're looking for the aesthetically rumpled, fall-right-into-bed look you've seen time and time again on Instagram, Cultiver's Linen Duvet Cover delivers just that. The duvet achieves a relaxed, organic feel thanks, in part, to the fact that it's pre-washed with natural enzymes in order to achieve optimal softness.

It’s also sustainable, made from eco-friendly European flax crops which require little water to produce. What about colors, you ask? Don't even get us started on those. Cultiver offers a whopping 15 shades and patterns from blush and olive to navy and pinstripe. 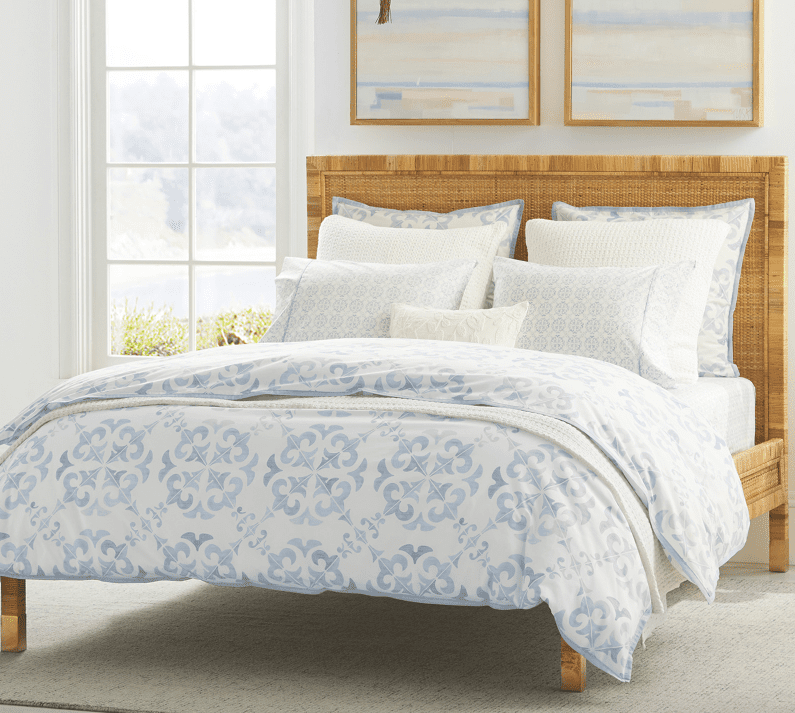 As far as patterned duvet covers go, this one is giving us IRL heart eyes. The design was actually hand painted to resemble Portugal’s stunning azulejo tiles and features a color palette of cool coastal blue and crisp white.

If the design isn't enough to convince you to "add to cart," know that this duvet is made from 100 percent cotton percale. The material is airy enough for hot summer nights and it’s OEKO-TEX certified, meaning that it’s free from harmful chemicals. 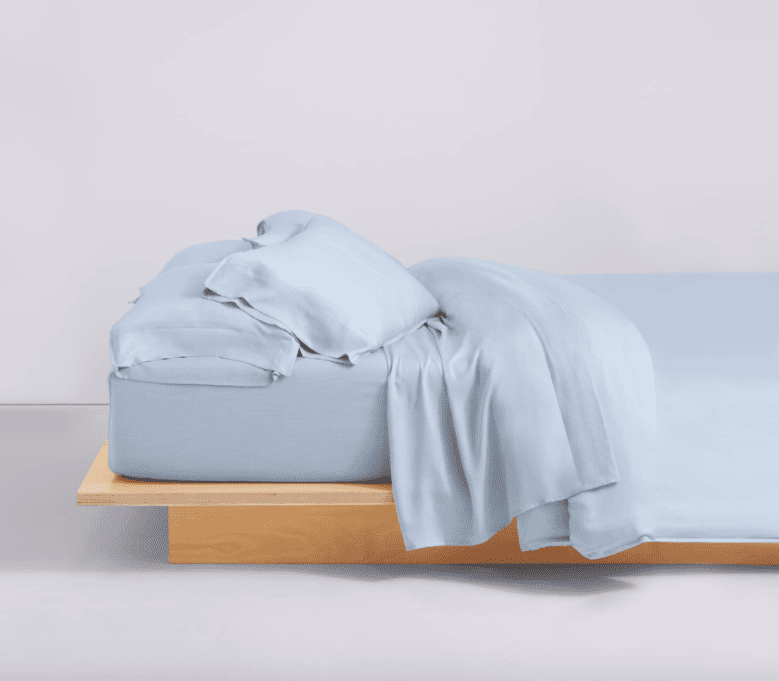 If summer's soaring temperatures often have you kicking off your comforter, allow us to introduce you to Buffy’s Eucalyptus Cover. Since it's made from moisture-wicking, ultra-breathable eucalyptus, the duvet will keep you cool all season long.

Another big plus? Since eucalyptus takes 10 times less water to produce than cotton, you can sleep easy knowing that this cover is sustainably made. Buffy even takes things one step further using eco-friendly dyes formulated with simple ingredients like pomegranate, indigo, and turmeric.

7 Eucalyptus Sheet Sets That Are Perfect for Hot Sleepers 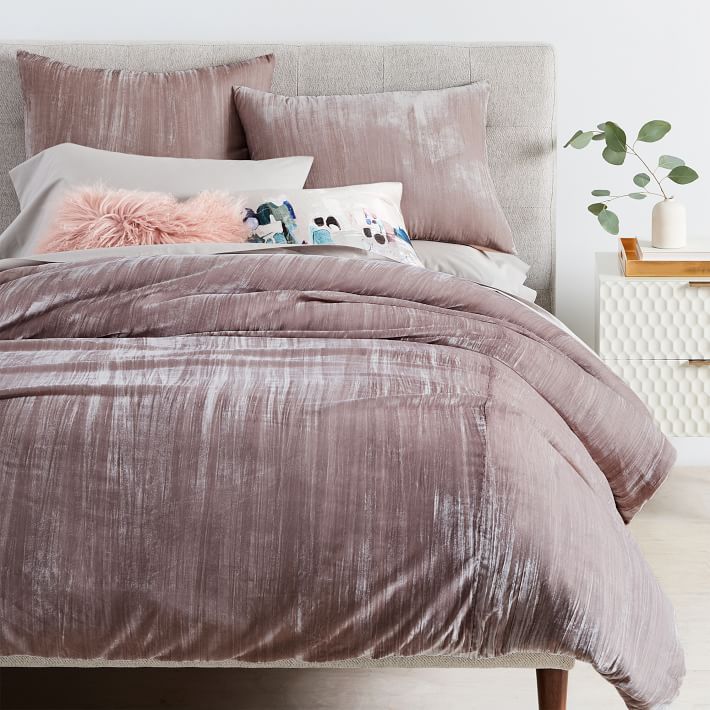 Who doesn’t love the look of crushed velvet? The lush, rich fabric instantly elevates any space and can transform your plain Jane bedroom into an opulent boudoir. This duvet cover features a modern version of crushed velvet (crinkle velvet) that’s both lustrous and linear for even more of a couture, upscale feel.

West Elm's Crinkle Velvet Duvet Cover isn't just beautiful, it also sleeps warm, making it an ideal pick for fall and winter. Since the reverse side of the duvet is 100 percent cotton, it's extra comfy, too. The duvet cover is available in four gorgeous hues, our favorite being the jewel-toned regal blue.

The Best Velvet Bedding to Add Some Luxury to Your Space 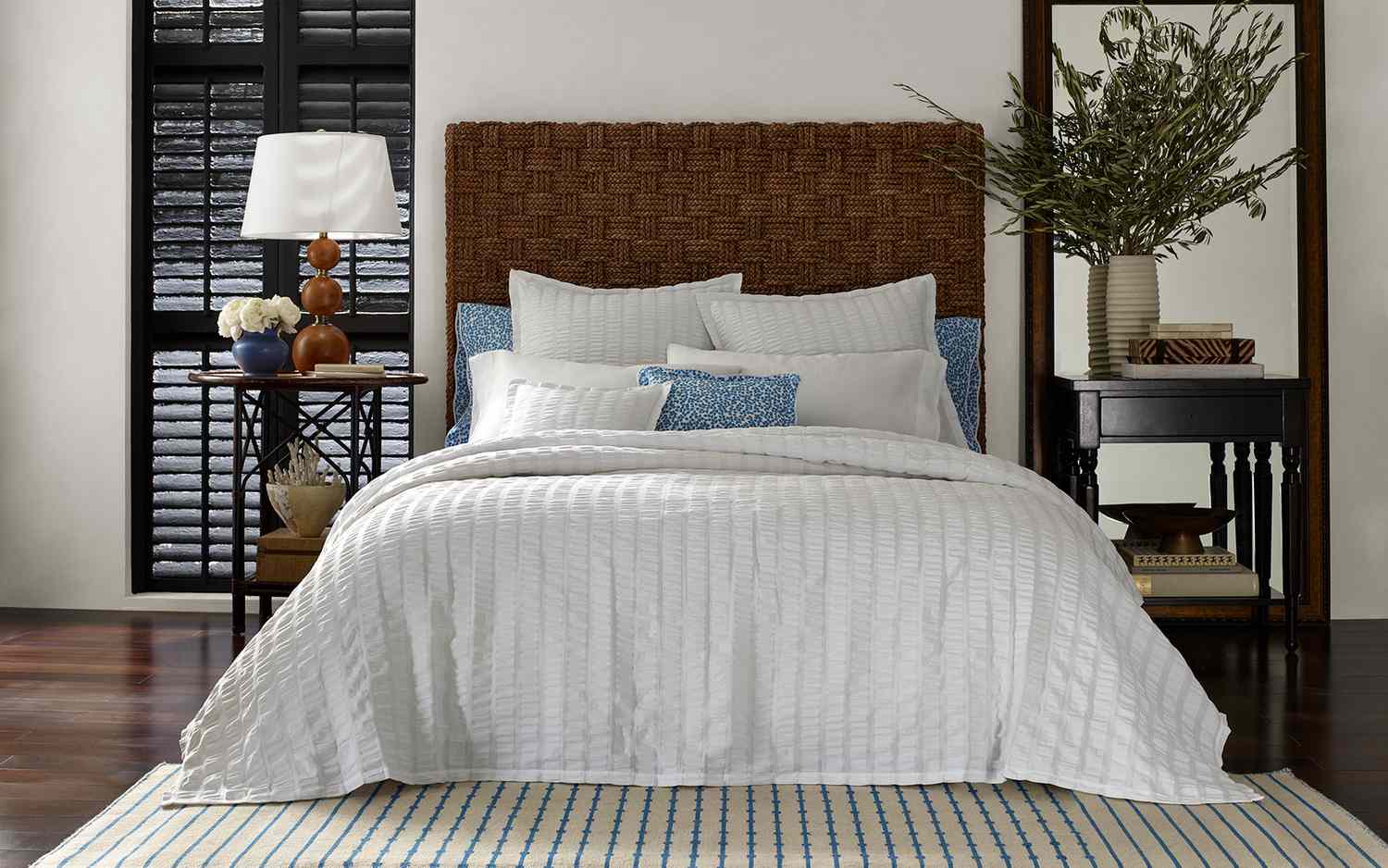 A bit of texture can go a long way when it comes to upping your bedroom's design game. A tactile duvet, like Matouk's Panama, will add a subtle femininity and a lived-in feel to your space, while still doing its job of keeping you cozy with 100 percent cotton construction.

Besides its subtle seersucker and basketweave pattern, we love that this duvet cover is also OEKO-TEX certified. If you love the look but just aren't sure if it's the right fit for your space, Matouk can also send a free fabric sample so you can be certain before any credit card damage is done. 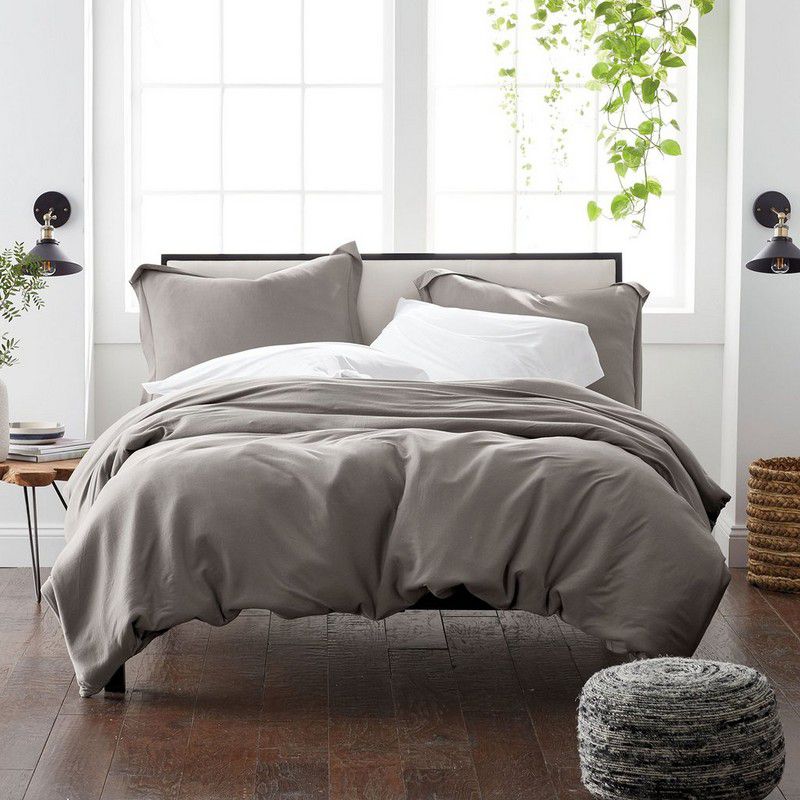 Courtesy of The Company Store

View On The Company Store

While linen and cotton are classic bedding fabrics, there's something to be said about jersey. The stretchy fabric is low maintenance, wrinkle resistant, and has the cozy, well-worn feel of your favorite college tee. If you already have a set of jersey sheets in your linen closet, a jersey duvet cover is the next thing to take your bedding up a notch.

This cover, which comes courtesy of The Company Store, is crafted from 100 percent organic combed cotton—a super-soft knit fabric that has “lazy Sunday morning” written all over it. Available in five colors (our fave is the calming blue hue), this duvet cover is also machine washable so you won't have to lug it to the dry cleaners any time soon.

The 6 Best White Bedding Sets for Every Budget 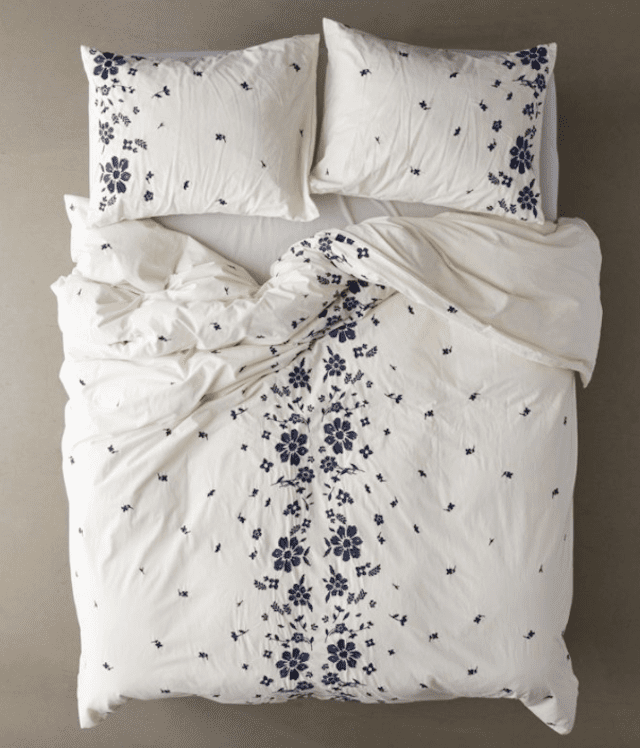 Isn’t this duvet cover just darling? With feminine embroidered florals, UO's Samantha cover offers both texture and a daintiness that’s hard not to fall for. Since the embroidery is concentrated in the center of the duvet, the design avoids being overly busy, and while it's available in four stunning shades, we're particularly smitten with the bright mustard yellow which artfully contrasts the white wildflowers.

When it comes time to clean your linens, you'll be happy to find that the duvet is machine washable. After a quick spin through the washer and dryer you'll be back to dozing off in your own field of blooms.

These Are the Best Quilts and Coverlets to Keep You Cozy

Overall, percale is a great fabric choice for an all-season duvet, and Snowe's Percale Duvet Cover (view at Snowe) is our favorite. It's plush, unfussy, and available in five soothing colors. If you're looking for luxury, Frette's Ultimate Duvet Cover (view at Frette) is hard to beat thanks to its incredible thread count of 1,000.

What to Look For in a Duvet Cover

One might think that choosing the correct size for a duvet cover is just a matter of choosing between Twin, King, or Queen, but unfortunately, that's not always the case. Different brands and manufacturers vary slightly when it comes to standardized bedding sizes, so if you're buying a duvet insert from one brand and a duvet cover from another, you might be in for an unwelcome surprise. The thickness of your duvet insert will also have an impact on how snugly a new duvet cover will fit. For best results, we recommend noting the measurements of your duvet insert and finding a cover that has the exact same or very similar (plus or minus an inch for extra-fluffy or lightweight inserts) dimensions to ensure a proper fit.

As a rule of thumb, if you have a favorite set of sheets in percale, linen, sateen, or any other fabric, chances are a duvet cover made from the same material will be an overall winner. But, there are exceptions to the rule. For transitional seasons such as spring, for instance, you may want to pair percale sheets with a linen duvet cover for a little temperature flexibility at night. Sure, your sheets and duvet may not perfectly match one another for a few weeks, but there's something to be said for having a diverse selection of bedding options to choose from when it comes to comfort.

Without corner ties, putting on a freshly washed duvet cover can become a comedy of errors. For larger bed sizes especially, we recommend finding a duvet cover with four corner ties to help keep your insert in place. When it comes to closing up the duvet cover once it's on, buttons are the most popular option, but take note of whether they're hidden beneath an extra layer of fabric or exposed as it will have an impact on how finished your final bedscape looks.