14 Space-Saving Bookcases You Won't Believe Are From IKEA

It's no secret that IKEA frequently catches our attention with its minimalist Scandinavian designs and highly functional pieces. The brand has long been a destination for affordable furniture and décor finds, often visited by those looking to affordably and efficiently furnish their home. However, it's also often sought out by interior designers looking for a deal, DIY-enthusiasts ready for a new project, and even home editors with a penchant for hidden gems.

Among the many items waiting to be discovered at IKEA are a treasure trove of space-saving bookcases. From tall, skinny pieces fit for awkward corners and tight hallways to larger glass options perfect for displaying decorative pieces, the Scandinavian retail giant has it all. In fact, its bookcases have developed quite a reputation for being extremely popular and versatile.

Take the "Billy" bookcase, for example. According to IKEA's website, it's estimated that one Billy Bookcase is sold somewhere in the world every five seconds (just let that sink in for a minute). For a piece of furniture first launched back in 1979, that's a wildly impressive statistic. It's also why we've taken the liberty of assembling a list of 14 IKEA bookcases sure to add style and function to your home for years to come.

Keep scrolling to shop 14 of IKEA's best bookcases and find something for every space and style.

The classic Billy bookcase does not disappoint, even more than forty years after it was first designed. It boasts a simple look that will never stop being highly functional and minimalist (with a low price to boot). While it comes in a variety of styles with different combinations of drawers and cabinet doors, the original style with open shelves is made in a timeless bookcase design suited for any space in the home. 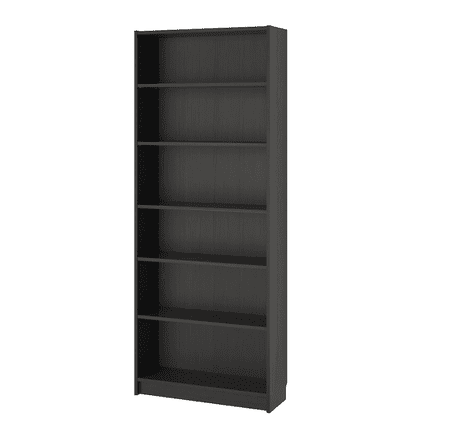 For a chic, industrial look, consider this black metal shelf unit. The metal material allows the bookcase to hold magnets for notes, while the adjustable shelves make the piece completely customizable. This bookcase is especially functional if you have a collection of books of varying heights, or plan to style dynamic décor alongside your library. 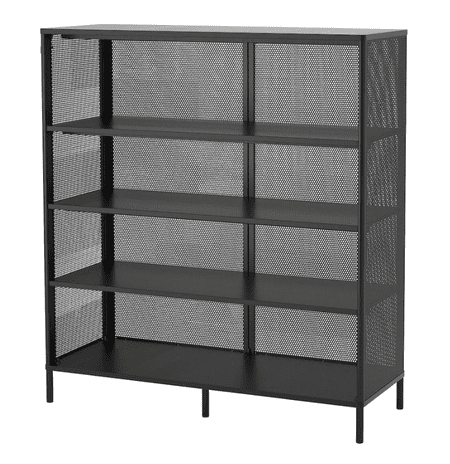 This version of the iconic Billy Bookcase features a natural wood veneer frame and tempered glass doors to keep your belongings safe and neatly organized. It's a modern twist on the classic design. Opt for styles like these when you need extra storage shelves for items you don't necessarily want to put on display. 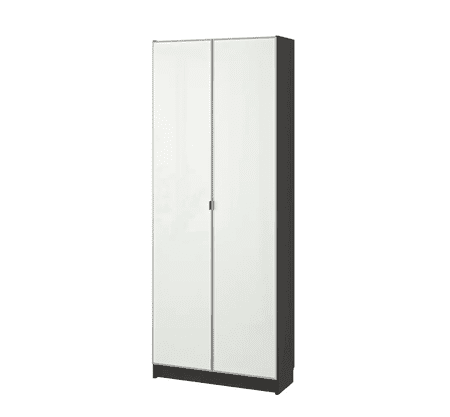 This versatile bookcase can fulfill multiple purposes depending on your needs. With a finished back, the piece can be placed anywhere in your space—and the shelves of varying sizes can fit any items you'd like to store. This piece could work as stand-alone shelving or underneath a large desk in a home office. 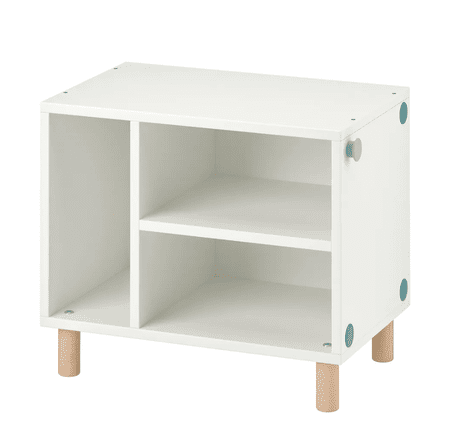 Get the most out of any available vertical wall space you have with this tall bookcase. Since it comes with a height extension unit, you'll be able to decide how much storage you need and opt for a taller version with additional shelving. There are also glass doors to keep objects like glassware safe and clean, and the deep paint color on natural wood veneer looks timeless. 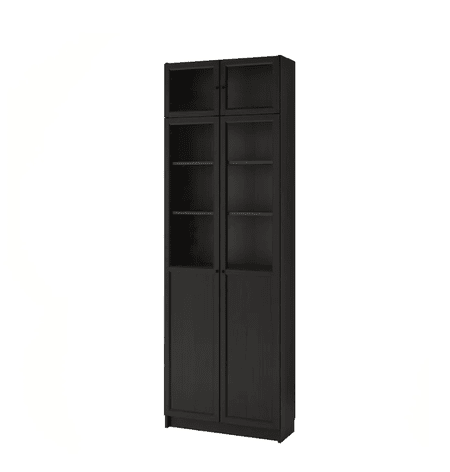 An innovative horizontal bookcase, this shelving unit maximizes wall space by offering two compartments behind glass doors as well as an additional vertical shelving unit. You can even customize the piece by placing fabric or photos in between the glass and panel of the doors. If you're really in the DIY spirit, add extra fabric to the walls of the inner shelves for a cohesive finish. 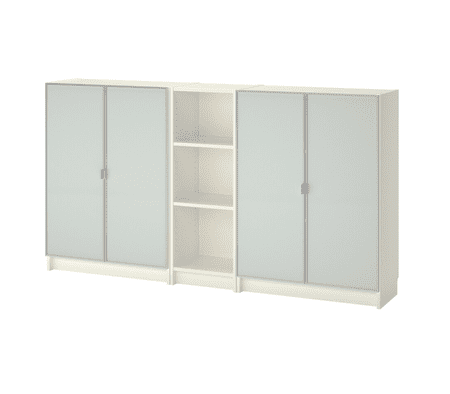 Ideal for a kid's bedroom, this white piece features four shelves and two drawers for ultimate bookshelf organization. Since the drawers are located at the bottom, it's easy for children to reach anything they need. Style the upper shelves with playful décor, or utilize the additional storage for off-season clothing. 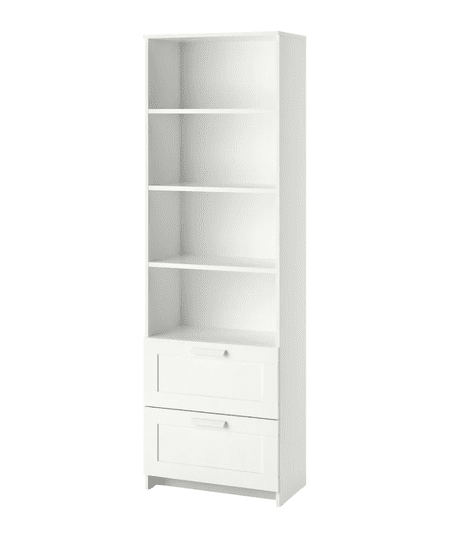 This classic bookcase could work in just about any space. From the bedroom to the living room (or even a hallway), its elegant look adds both function and style wherever it's displayed. The shelves are adjustable to fit your needs, perfect for showing your favorite pieces in a timeless design. 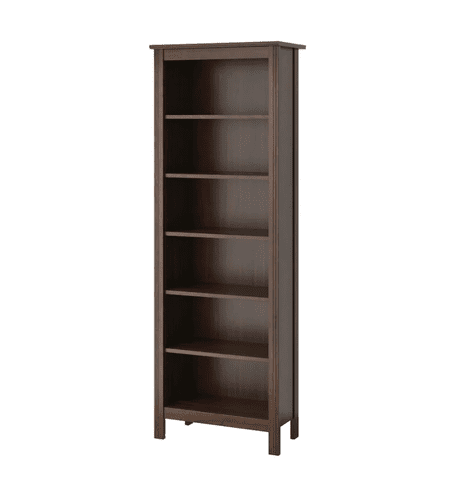 A narrow bookcase like this is perfect for a snug dining room or kitchen. Use it to display dishes and glassware in a minimalist fashion, or for extra storage on shelves in the bathroom. You can also pair it with a Billy height extension unit or corner hardware to create a larger bookcase that expertly fits your space.

Measure the available space in the area you plan to style a bookshelf, and play with different combinations of IKEA's versatile bookcases for a shelving unit that fits perfectly every time. 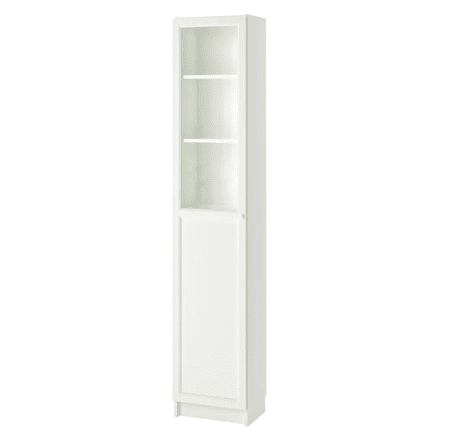 This IKEA bookcase can be yours for just $20. It's a simple piece featuring five shelves and an open style, similar to a leaning bookcase without the angles. Use it to hold books, picture frames, and other decorative objects styled together for a dynamic design. 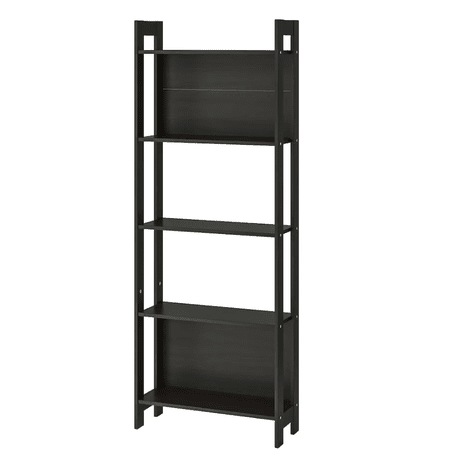 This birch veneer Billy bookcase is about as simple and streamlined as it gets. The narrow design was made for tight quarters, and four of the shelves are adjustable to accommodate your storage needs. In its light, natural wood finish, this bookcase is perfect to fit earthy designs and neutral décor. 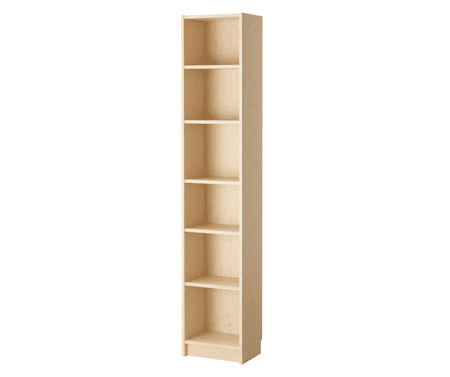 No one would guess that this chic gray and metallic bookcase with glass doors was sourced from IKEA. The large storage unit would look stylish in the living or dining room, and it's perfect for holding a variety of books, knick-knacks, art, and various décor. If your ceilings are tall enough, you can even use the top surface to display a potted plant or a leaning framed print. 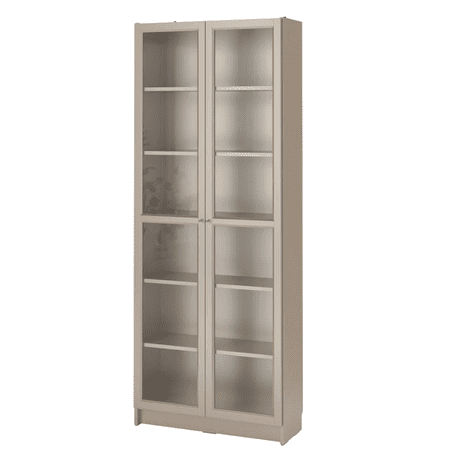 Give any room in your home a modern storage upgrade with this black-and-white bookcase. A few open shelves allow you to display visually appealing objects out in the open, while glass doors offer more discrete extra space. This piece is perfect for rooms in need of storage for a variety of items that will be housed in the same place.

This tall black bookcase looks sleek and sophisticated despite its affordable price tag. Place it in a home office, bedroom, or living room to hold all of your spare belongings. Thanks to its combination of open shelves and drawers, this IKEA find is easy to store both hidden items and decorative pieces alike. 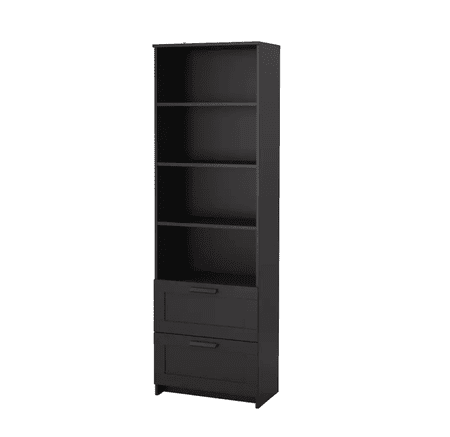 IKEA BRIMNES Bookcase $99.00
Shop
12 Narrow Bookcases That Will Fit Your Most Awkward Nooks