Yes, You Can Grow a Garden This Spring—All You Need Is 15 Minutes 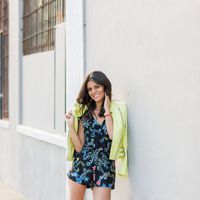 It’s springtime! Tree-lined streets are fragrant with beautiful blossoms. Farmers markets are filled with freshly harvested herbs, fruits, and vegetables. And you’re still running out the door to make it to The Studio (MDR) before work… so that hasn’t changed. And while you appreciate nature and farm-to-table and organic fare, you’ve never considered growing your own garden because you simply don’t have the time. Is it even possible when you have a demanding schedule? Or maybe you’ve thought about it, but felt, I don't know, intimidated (we’re raising our hand). Some of us aren’t even sure we can keep a cactus alive!

According to Rolling Greens’ owner, Greg Salmeri, you can nurture plants with just five, 10, and 15 minutes a day (trust us, ahead Greg guides us through growing spring’s simplest edible plants). The landscape designer with a green thumb and two gorgeous nurseries and home décor shops in L.A. describes many of his friends as “aspirational gardeners.” “They really want to be out in the yard, and they appreciate the beauty of the yard, but they don’t feel like they have the time to dedicate to having a successful garden,” he explains. Can you relate?

Greg tells MyDomaine, “A little attention in the yard goes a long way.” PS: He’s only taken one horticulture class ever. “Everything else I learned ‘on the job,’” he shares. So there is hope. Keep reading if you’ve ever killed a succulent (guilty), or if you were under the impression that you don't have time to grow a garden.

This aromatic herb is among our favorites. It not only smells beyond refreshing and is a natural pest repellent, but it also makes an amazing tea for calming nerves and anxiety, explains Greg. Added bonus? “It’s rumored to soothe hangovers,” he quips. Perfect. Because you know what else mint is great for? Mojitos.

How to Grow It: “Start with mint seeds and a large, deep pot about 10 inches in diameter. Mint will grow fast and sprawl,” explains Greg. “Fill the container with potting soil and plant the seeds.”

These nutrient-dense plants are exactly as the name suggests, “a very small, young, and tender edible leaf.” Greg shares with MyDomaine that microgreens have even more nutrients than their full-grown counterparts depending on their species. Preparing a dish with the plant is just as low-maintenance as growing them. Add vinaigrette dressing and strawberries, and you’ve got yourself a seasonal salad!

How to Grow It: “Purchase a variety of seeds such as dill, beets, basil, kale or Swiss chard. Fill a shallow pot with a drainage hole or a seedling tray with potting mix. Moisten the soil with water to make damp, but not wet. Sprinkle in your seeds so they are close to each other and sift a thin layer of soil over those seeds. Using a spray bottle, lightly mist that top layer of soil,” explains Greg.
Watering: “Place your seedlings on a sunny windowsill in a room that stays between 60 to 70 degrees Fahrenheit,” says Greg of the tiny plant that will germinate in three to five days and requires a swift daily misting of the soil.

This root vegetable is best known to improve vision, but carrots are also rich in vitamins and minerals including folate, manganese, potassium, thiamin, niacin, and vitamins B6, A, C, and K, explains Greg. (Did you get all that?). Basically, “Eat carrots!” he jokes. Roast the superfood for a simple and healthy meal. We’re getting ahead of ourselves, though, see below for how to grow the vegetable, which begins to sprout in two weeks!

How to Grow It: “You’ll need carrot seeds and a container or window box that is 1.5 feet deep as well as wide. You’ll also want drainage holes at the bottom. Fill the container to just under an inch of the top of the container with potting soil,” says Greg, noting to water the soil before planting the seeds.
Next, he says, “Plant the seeds one inch apart in rows that are six inches apart from each other by gently pressing the seeds into the soil and then covering with a thin layer of that soil. Water again!”

Among the many benefits of this fragrant and flavorful herb are anti-inflammation, cancer-fighting, and pain-reducing properties. It’s also great for cocktails like a blackberry basil whiskey smash, and it’s the MVP in pesto, just sayin’.

How to Grow It: “Purchase seeds and a container that is at least four inches wide with good drainage holes,” says Greg. “Basil loves warm temperatures and lots of sunlight,” he explains, “at least six hours of direct sunlight per day.”

Watering: “You’ll need to water it once a day,” Greg tells MyDomaine. Fertilizing and pruning are also important. It’ll take 10 minutes once a month to fertilize the soil. Greg suggests using an organic fertilizer like compost tea. Regarding pruning, he explains to start once the plant is six inches in height, and bushier. “Also be sure to snip off any flowers that appear,” he points out.

“Aside from the dreamy smell, this herb is rich in antioxidants that may help limit weight gain and improve cholesterol levels,” says Greg. Need he say more? We’re listening…

How to Grow It: “Start by planting seeds or propagating cuttings in a container with holes in the bottom for drainage,” he says. “For rosemary, this requires 15 minutes since you need to curate the soil for the plant.” What you’ll need: a soil made from a mixture of two parts potting soil to one part coarse sand. “Then you’ll need to add one teaspoon of lime (the agricultural kind, not the citrus fruit!) per five-inches of pot in order to to make the soil alkaline,” explains Greg.

Watering: “Water only when the top of the soil is dry to the touch,” says Greg. “Be sure not to let the soil dry out completely,” he warns of the plant, which needs to live in a sunny spot and receive at least six hours of direct sunlight.

This vegetable is among the top anti-cancer foods. Tomatoes get their red hue from a phytochemical called lycopene, which is a powerful antioxidant. There is also evidence that supports the idea that the cancer-fighting potential is increased if tomatoes are consumed in the form of tomato sauce. Hello, pizza and pasta.

How to Grow It: “Start with a six-inch pot for one plant and fill the container with starter potting soil,” says Greg. “Plant the seeds about 1/4-inch deep. Water and keep the soil moist but not soggy, and then place the container in an area that receives a substantial amount of light.” Be sure to turn the pot every few days so that all sides soak in the sunshine.

Expect the seeds to germinate within five to 10 days. “When they hit three inches, transplant them from starter mix to potting soil. Two weeks after transplanting, add in organic fertilizer,” he says.

Watering: “Follow the rule of keeping them moist, but not soggy,” Greg says. Also, the plant may need to be staked as it grows to avoid breakage, he warns.

Want to know how simple growing scallions are? Seeds aren’t required! The spring onion, part of the Allium family, is associated with protecting the body from free radicals and assists in cancer protection, Greg tells MyDomaine. It’s also a great alternative to onions this season because they’re less pungent.

How to Grow It: “Buy a bunch of scallions, preferably from the farmers market, and place the entire bunch (yes, the whole thing) in a glass with one inch of water,” explains Greg. Change the water daily, which should take you less than five minutes. “When new green shoots appear and the roots have doubled in length (it should take about seven to 10 days), plant the scallions in a small shallow pot.

Watering: “Keep the plants evenly watered,” advises Greg, aka don’t let the soil get too dry before rehydrating again. The scallions should also receive full sun, which is at least six hours per day.