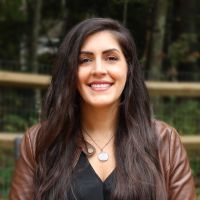 Lindsay Boyers
Lindsay Boyers is a writer and nutritionist based out of Massachusetts. One of her favorite pastimes is finding the best products to improve your health and your home life at the best prices. With 12 years of experience, she has written for Healthline.com, Livestrong.com and The International Journal of Professional Holistic Aromatherapy.
MyDomaine's Editorial Guidelines

Pressure cookers have come a long way since your grandmother used them to make her weekly beef stew. The pressure cookers of today offer ease, convenience, faster cooking times, and advanced safety features that also bring you peace of mind. What more could you want in a kitchen appliance? 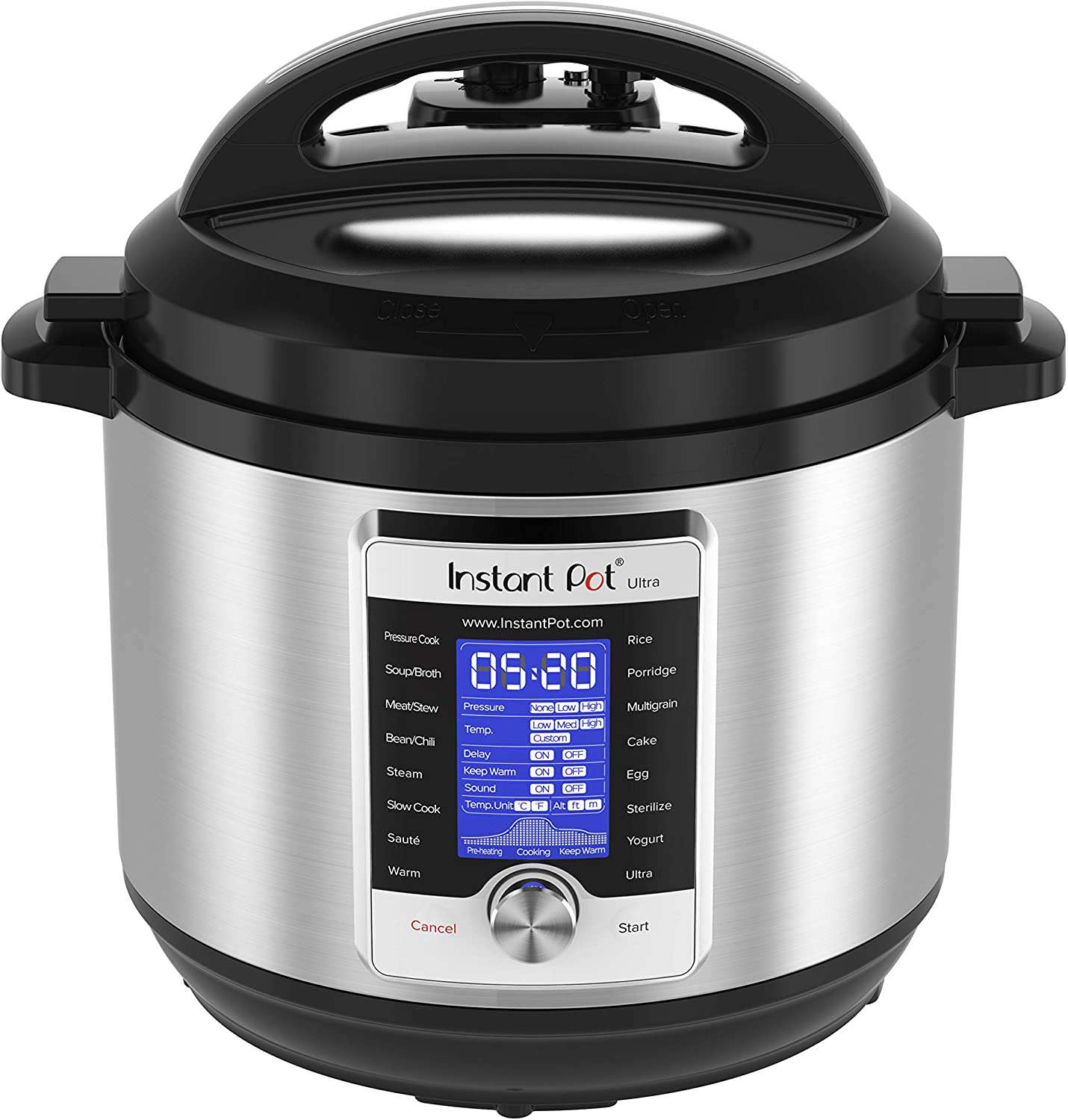 View On Amazon View On Walmart View On Williams-Sonoma

Instant Pot paved the way for electric pressure cookers, bringing them into the spotlight and onto everyone’s wish list. There are several different Instant Pot models out there, but the Ultra 10-in-1 is one of the most popular.

With 10 major settings, including pressure cook, saute, sous vide, and yogurt, and 48 customizable preset options, this pressure cooker can take the place of most of your other small kitchen appliances. It comes in three-quart, six-quart, and eight-quart options so you can choose the one that works best for your needs (or get all three, we won’t judge). 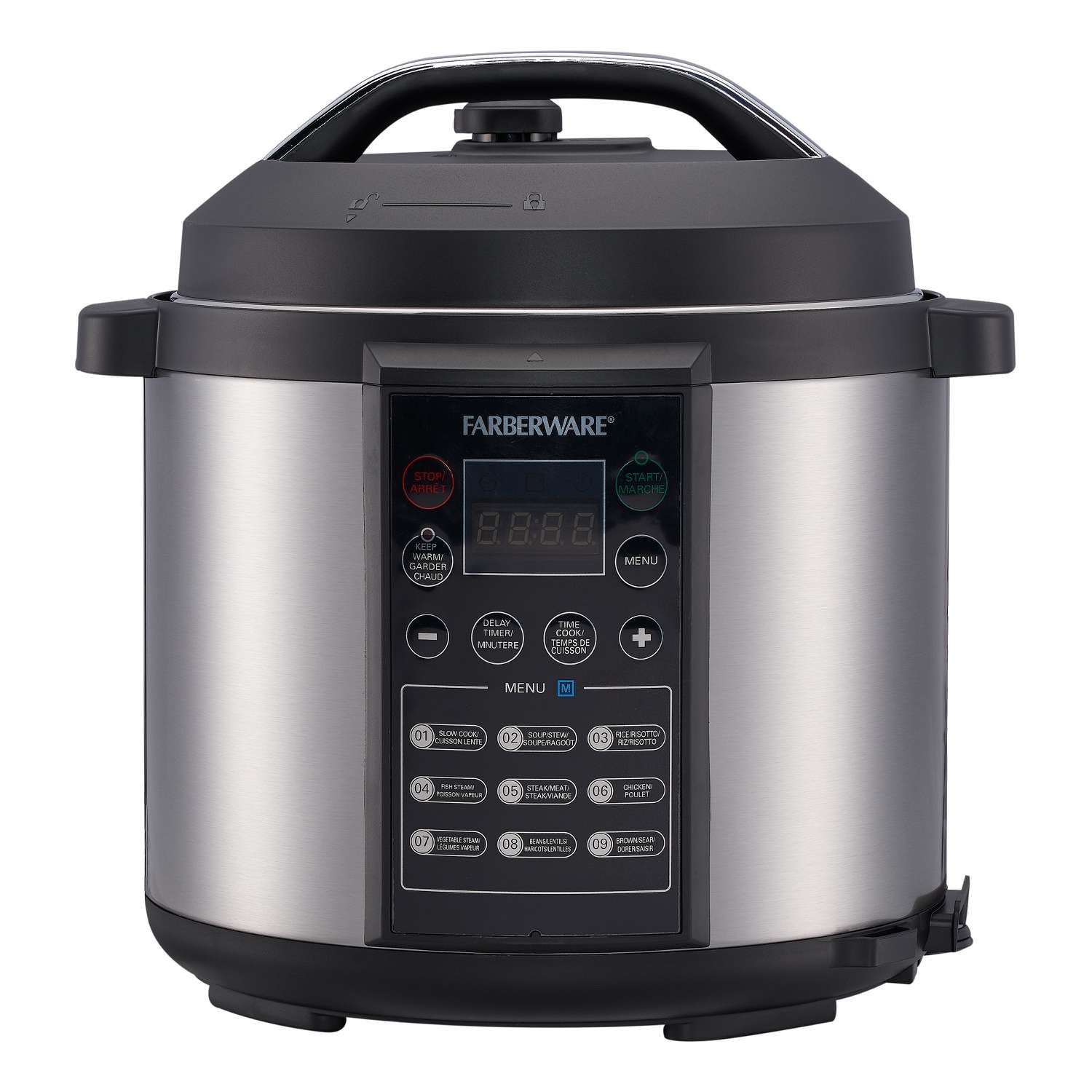 It has a six-quart capacity that’s ideal for a family of four, but if you need something larger, Farberware also offers an eight-quart version that has a larger inner cooking pot, but fewer pre-programmed features. 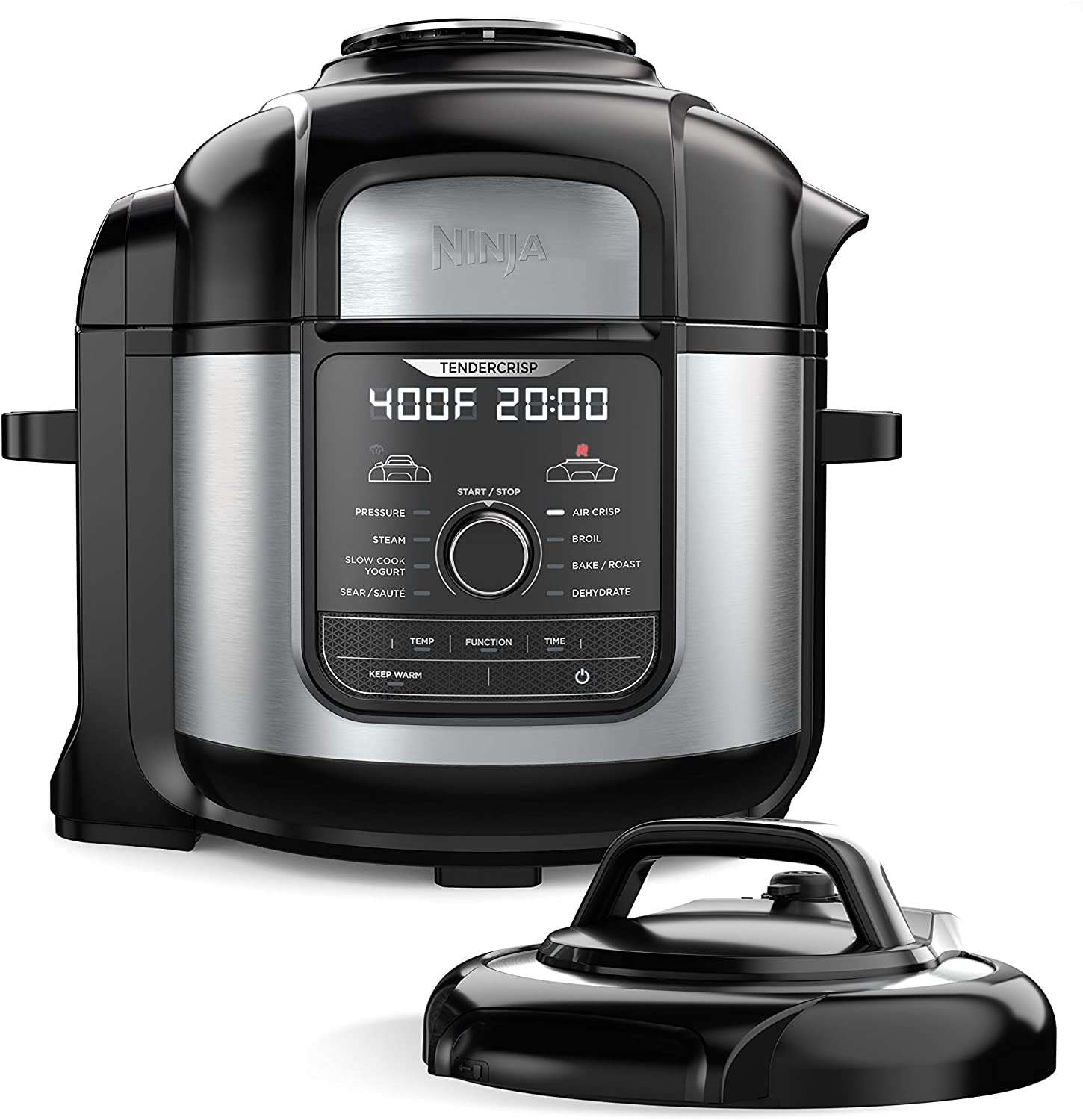 View On Amazon View On Wayfair View On Best Buy

Ninja is well-known for its multifunctional kitchen appliances, and the Foodi XL Pressure Cooker is another win to add to the list. It has nine different cooking functions, including pressure cook, steam, air crisp, and yogurt, and the setup includes an eight-quart inner pot, a five-quart cook and crisp basket, and a two-tiered rack that lets you double up on quantity.

One of the things that sets the Ninja Foodi Pressure Cooker apart is its TenderCrisp technology. This allows you to use the pressure cooking setting to lock in juices and flavor and then finish off with the air crisp setting for a perfectly-cooked crunchy chicken skin that you can’t get with other pressure cookers.

Take Your Dinner Up a Notch With These Air Fryers 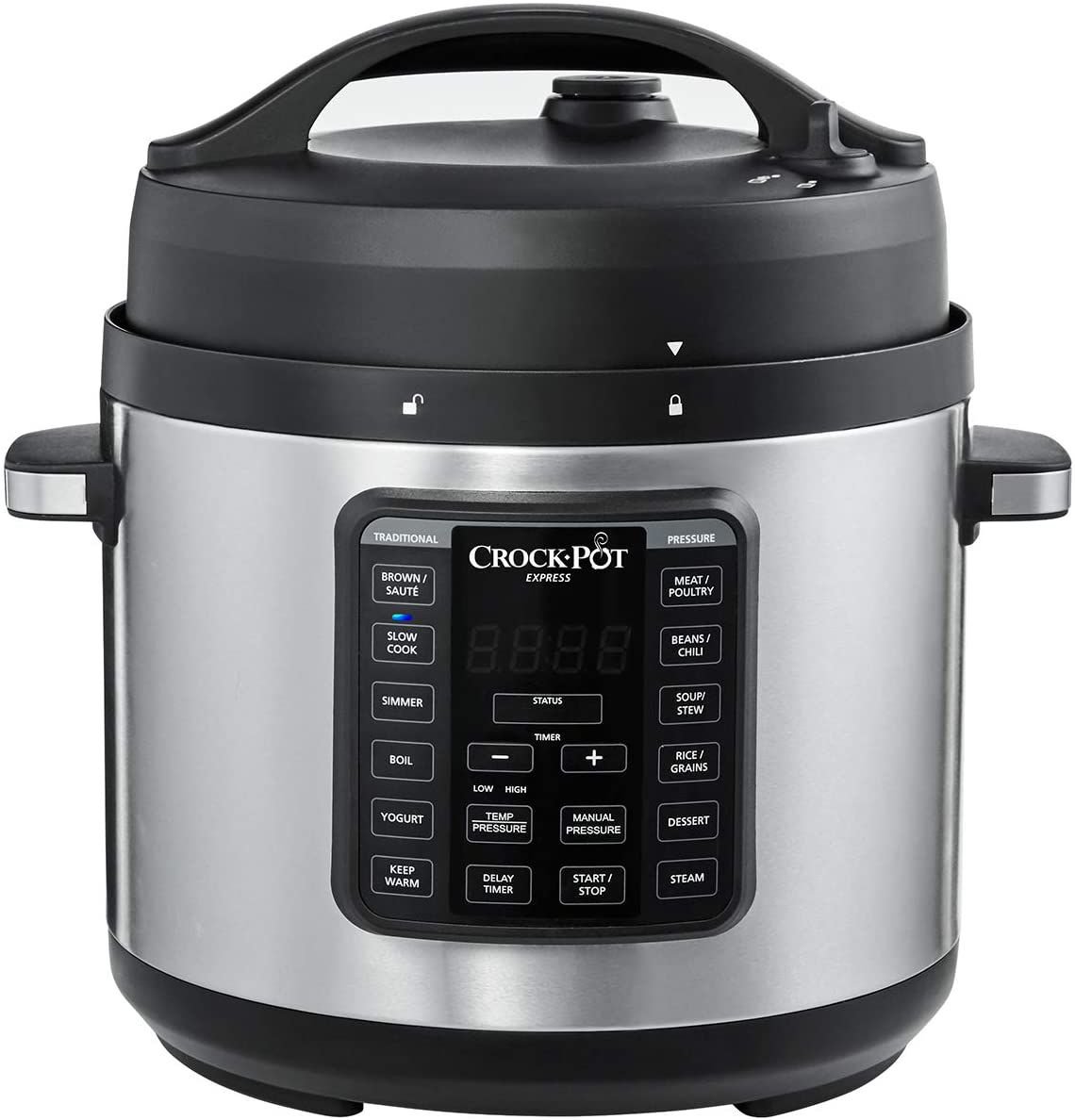 Crock-Pot may be best known for its slow cookers, but it's making a name for itself on the pressure cooker scene with the Express Easy Release Multi-Cooker. The all-in-one appliance functions as a pressure cooker, a rice cooker, a slow cooker, a food warmer, a yogurt machine, and even a dessert maker.

The 13 one-touch settings allow you to toggle through the different functions with a push of the button, or you can just set the temperature and pressure manually. It also has a stress-free steam release dial so you can keep your hands far away from the hot steam when releasing pressure. 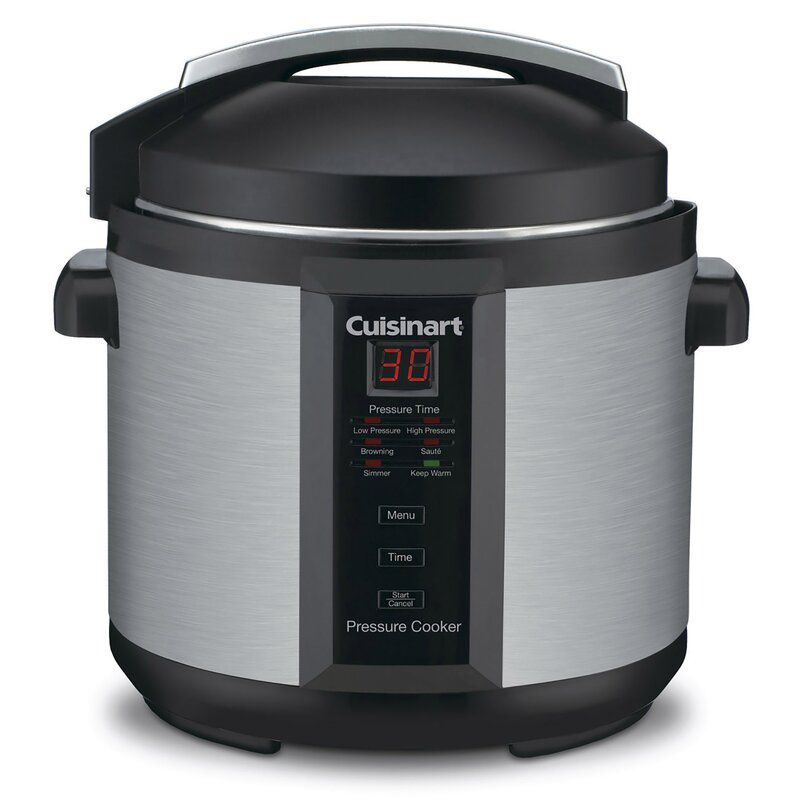 View On Amazon View On Wayfair View On Bed Bath & Beyond

The Cuisinart Electric Pressure Cooker is one of the most basic options on this list, but it gets the job done. It has low and high-pressure cooking settings, along with soup, beans, saute, and simmer functions. You can also use the push button controls to set temperature and time, up to 99 minutes. Once cooking is done, the automatic keep-warm function kicks on to keep your food fresh and ready.

It comes in four-quart, six-quart, and eight-quart options—all with identical features—so you can get the one that best suits you and your household. 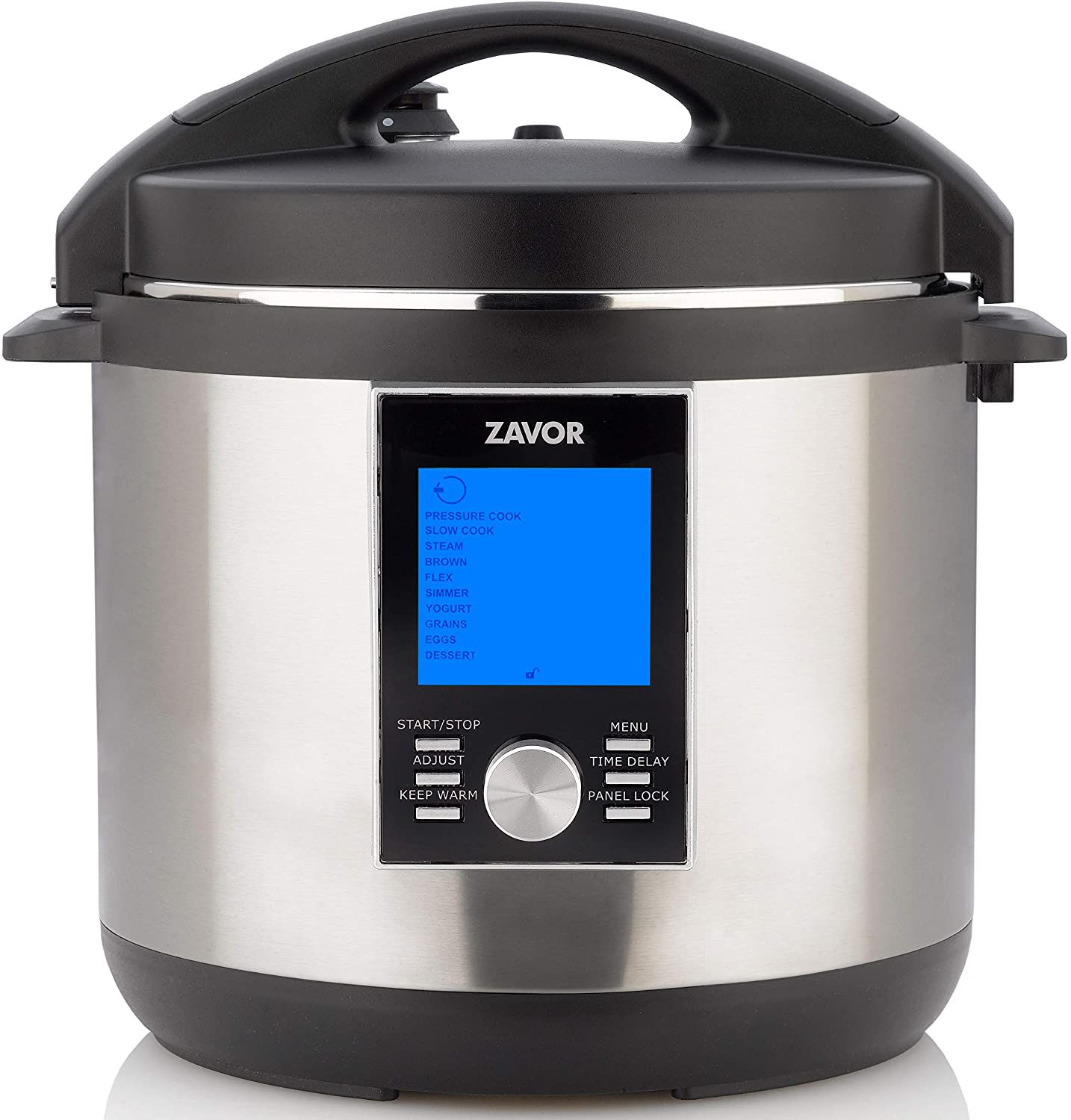 Technically classified as a multi-cooker, the Zavor Lux pressure cooks, slow cooks, steams, browns, simmers, and sous vides all in one place. It features 10 cooking functions and 33 programmable settings, including soup, risotto, and even cheesecake, plus a flex setting that allows you to turn it into a regular stockpot. It comes in four-quart, six-quart, and eight-quart options so you can cook as much or as little as you need.

View On Amazon View On Wayfair View On Breville.com

The Breville Fast Pro Pressure Cooker is a multifunctional kitchen appliance that brings smart technology into the mix. It has 11 pre-programmed pressure cook settings and a custom setting that puts you in full control. Dual sensors inside the pressure cooker monitor the food as it cooks, and automatically adjust pressure, temperature, and time to give you a perfectly-cooked meal, every time. It also has an automatic steam release, so you can bring down the pressure without worrying about burning your hands.

And with dual functionality—it’s a pressure cooker by night and a slow cooker by day—you can use it for quick or slow cooking (hence the name).

The 12 Best Luxury Gadgets That Will Make Your Kitchen Shine 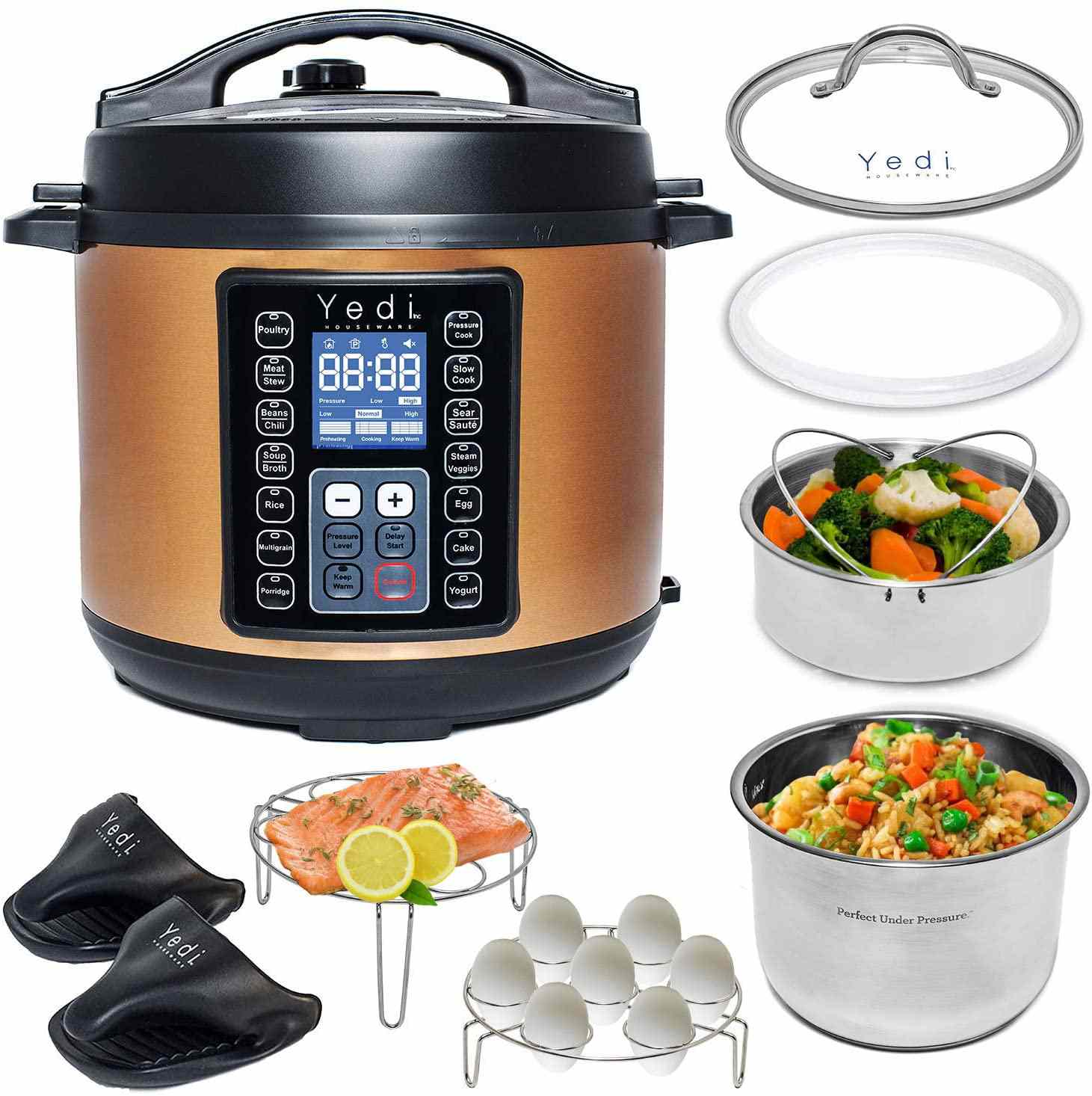 Yedi may not be as well-known as some of the other names on this list, but this nine-in-one pressure cooker deserves a spot in the same class as the big shots. It has nine functions, including pressure cook, slow cook, sauté, steam, and yogurt, as well as 15 pre-programmed cooking setting that you can operate with the touch of a button. You can also control the machine manually if you’d rather input your own cooking time and temperature.

What’s more impressive is that it comes with a deluxe accessory kit that includes two egg racks, a stainless steel steaming basket, a tempered glass lid, two cooking mitts, and more. While you can use accessories like these with other pressure cookers, you usually have to purchase them separately.

This six-quart stainless steel pressure cooker has two pressure settings and a secure locking mechanism on the lid that prevent you from opening it when the pressure is too high. It works with all types of heat sources—including induction—and cooks food up to 70 percent faster than other methods. 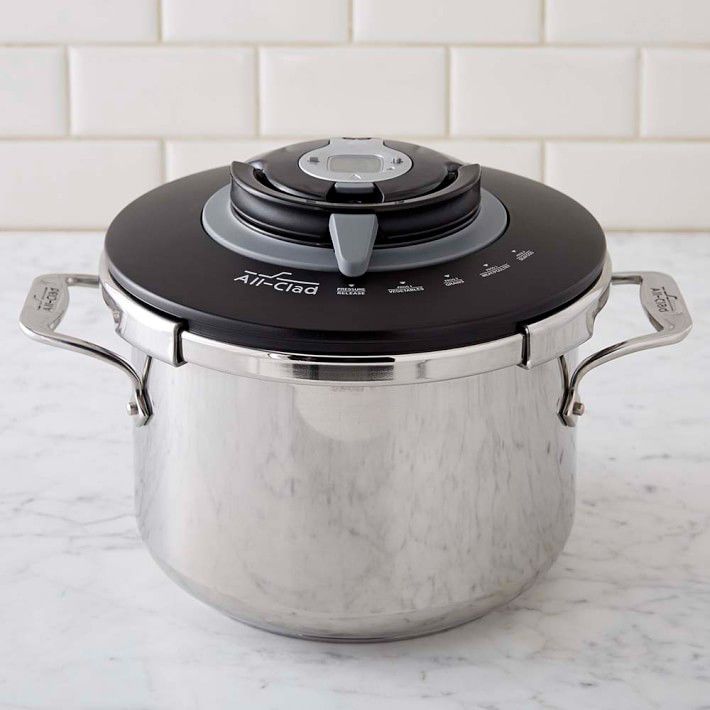 The All-Clad Stainless Steel Pressure Cooker is another stovetop option that falls somewhere in between basic and souped up. While it’s not an independent machine like the electric pressure cookers on this list, it does have four pre-programmed settings—vegetables, grains, seafood, and meat/poultry—and a digital display on the top of the lid that also functions as a removable timer.

The stainless steel body and aluminum core base provide even heating, while the integrated safety settings ensure that you can’t open the lid while the pressure is built up. Plus, it's one of the sleeker models on this list.

Thanks in no small part to its whopping 48 preset options and 10 settings, the Instant Pot Ultra 10-in-1 Pressure Cooker (view at Amazon) comes highly recommended. You can enjoy nine cooking functions (plus a large digital display) for a fraction of the price with the Farberware Programmable Digital Pressure Cooker (view at Walmart), which makes it our pick for those shopping on a budget.