10 Shower Curtains That Will Stun In Your Space

Lindsey Lanquist is a design expert for MyDomaine, covering the latest home trends and design tips. She has over 6 years of digital media experience. In addition to serving as former senior editor at StyleCaster and staff writer at Self, her work has appeared in Cosmopolitan, Byrdie, Verywell, SheKnows, Nylon, and more.

The shower curtain is the centerpiece of any bathroom, and even if you don’t intend for it to become the focal point of your space, it’s bound to. Why? With the absence of furniture, shower curtains are usually the largest décor piece in any bathroom. Plus, they hang at eye level so they’re pretty much impossible to ignore.

Given this, it makes sense to invest time and effort in selecting a shower curtain for your space. The good news is that there are tons of cute shower curtains out there, and they're easy enough to switch out when you need a change.

Here, the best shower curtains no matter what your style is. 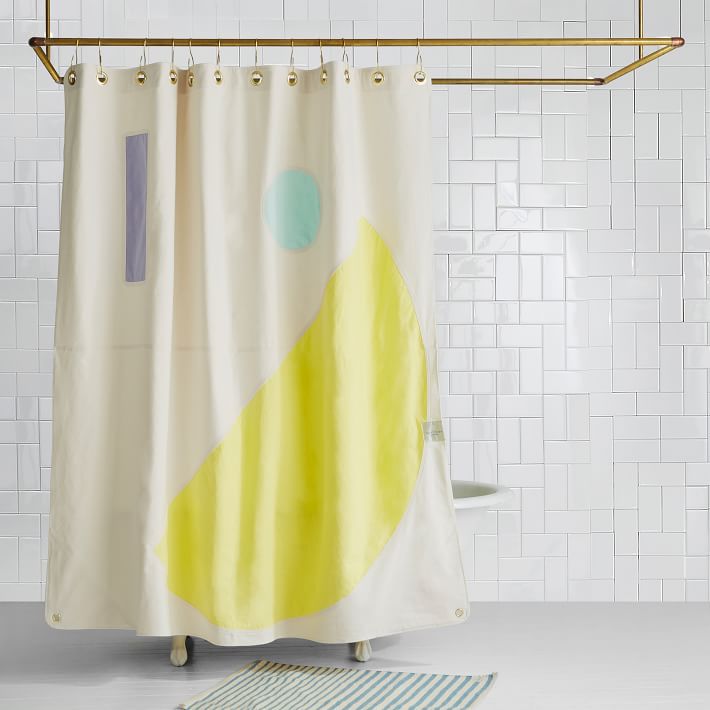 Quiet Town's shower curtains look more like works of art than bathroom décor, and they have the price tag to prove it. They're some of the best shower curtains out there though, with a durable cotton canvas construction complete with gorgeous graphics. Putting one in your space will add a welcome dose of visual interest to your bathroom without overwhelming it.

What else? This shower curtain’s pattern isn’t just printed on—it’s genuinely quilted into the curtain, setting it apart from other options. The result is a shower curtain that feels elegant, textured, and artisan all at once.

If you're torn between minimalist style and pops of color, this shower curtain is the best of both worlds. Designed with rainbow stitching on a crisp white curtain, this versatile style will match just about any bathroom accessories you've been eyeing. If the rainbow style isn't your thing, though, the curtain is also available in ombre navy or gray for a more muted yet on-trend look. 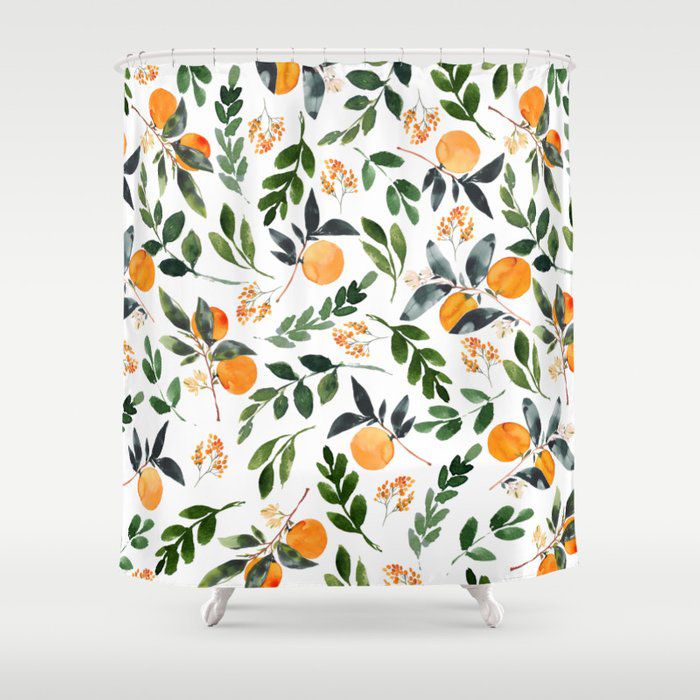 If you like the idea of florals but want something a bit, ahem, fresher, check out fruity patterns instead. This shower curtain from Society6 is designed with oranges and botanicals for a cheerful look that'll brighten up even the drabbest of bathrooms. Made with 100 percent polyester, it's also easy to take care of and will last a long time.

Not a fan of the oranges? Society6 has tons of other options, including abstract motifs, quirky designs, and even reprints of famous works of art. 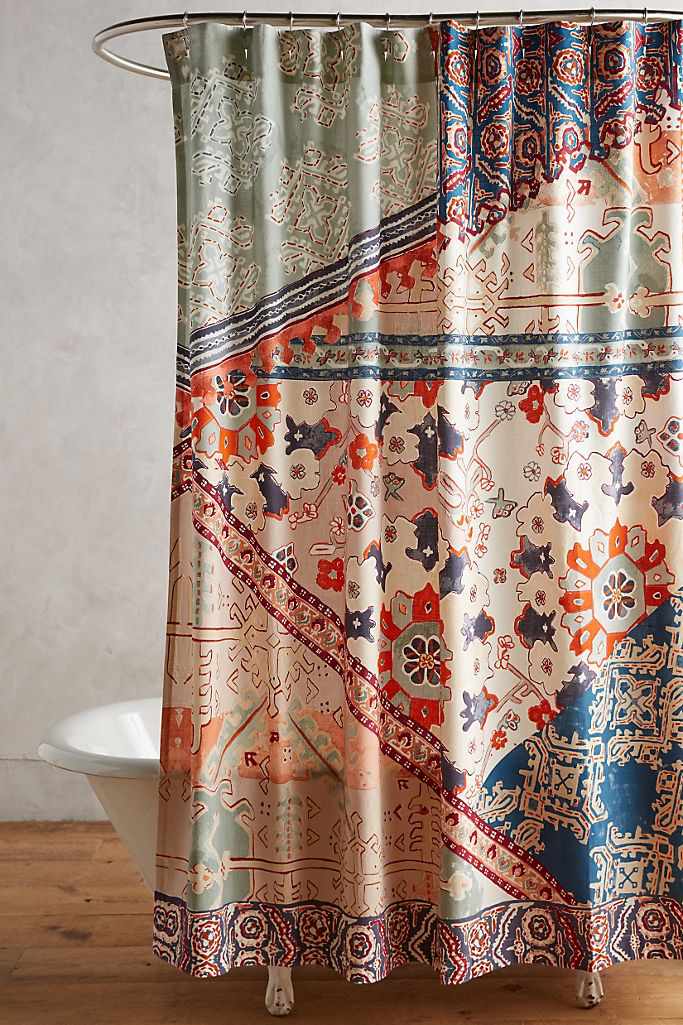 Fill your space with color, print, and texture with Anthropologie’s Risa Shower Curtain. This bohemian shower curtain is lined with bits and pieces of bold patterns—in one corner, you’ll find blotches of peach and mint, while in another you’ll find an intricate white pattern overlaying a rich blue background.

Every time you glance at the Risa Shower Curtain, you’ll find something new to admire. Pair it with your prettiest antique tub or your most ornate statement mirror, and get ready to spend too much time staring at your stunning new purchase. 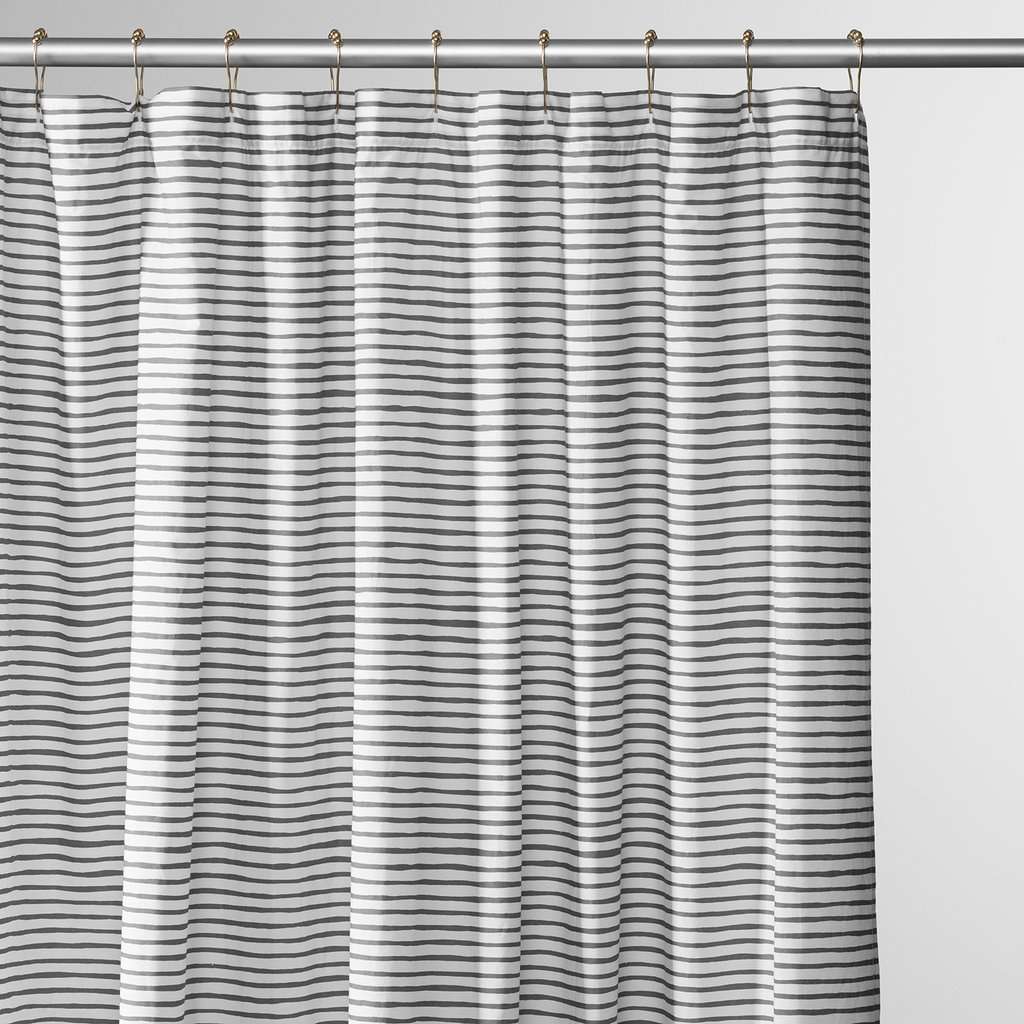 Schoolhouse’s Painterly Stripe Shower Curtain is a favorite among interior designers, and it’s not hard to see why. This graphic option brings a classic pattern—stripes—into the 21st century by rendering it with a crafty, imperfect hand.

Take a closer look at the curtain, and you’ll notice that each stripe is a little uneven. There are dips, blotches, and waves—which add just enough texture to the print to make it feel special. These hand-drawn details make the Painterly Stripe Shower Curtain a fun and whimsical pick, but thanks to its pared-down palette, it feels a little sophisticated, too.

It's Official: These Are the Best Bathroom Trends of the Year 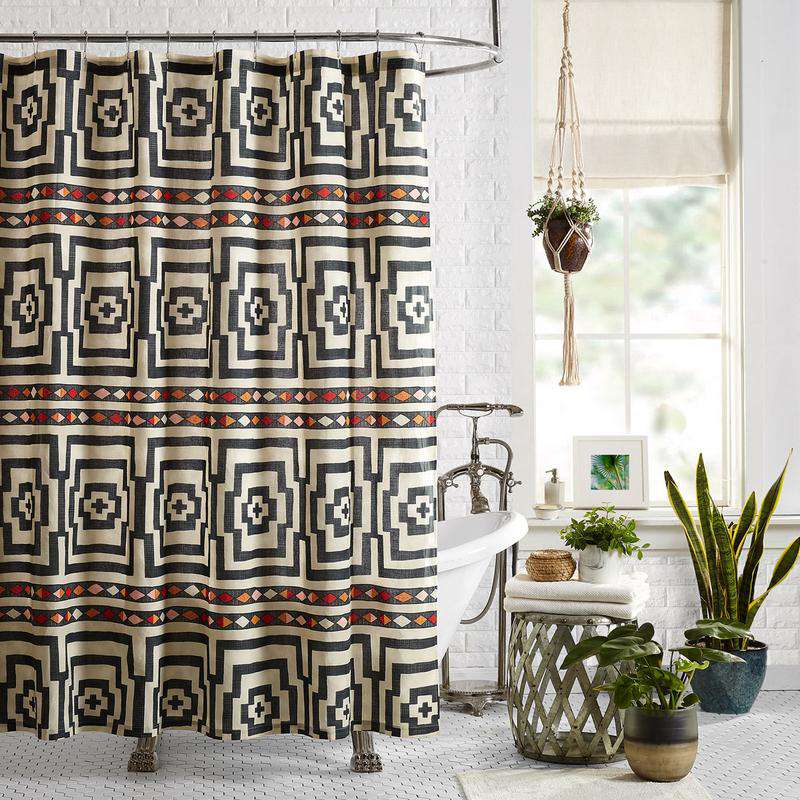 View On Bed Bath & Beyond View On Jungalow.com

Interior designer Justine Blakeney is known for her boho style, and her Hypnotic Shower Curtain is proof. Designed with a geometric pattern that's reminiscent of a beachy resort vacation, the charcoal gray and white curtain includes pops of red, orange, and that'll sit pretty in any bathroom. Just add some rattan décor, a plant or two, and a colorful bath mat, and you'll have the gorgeous boho bathroom of your dreams. 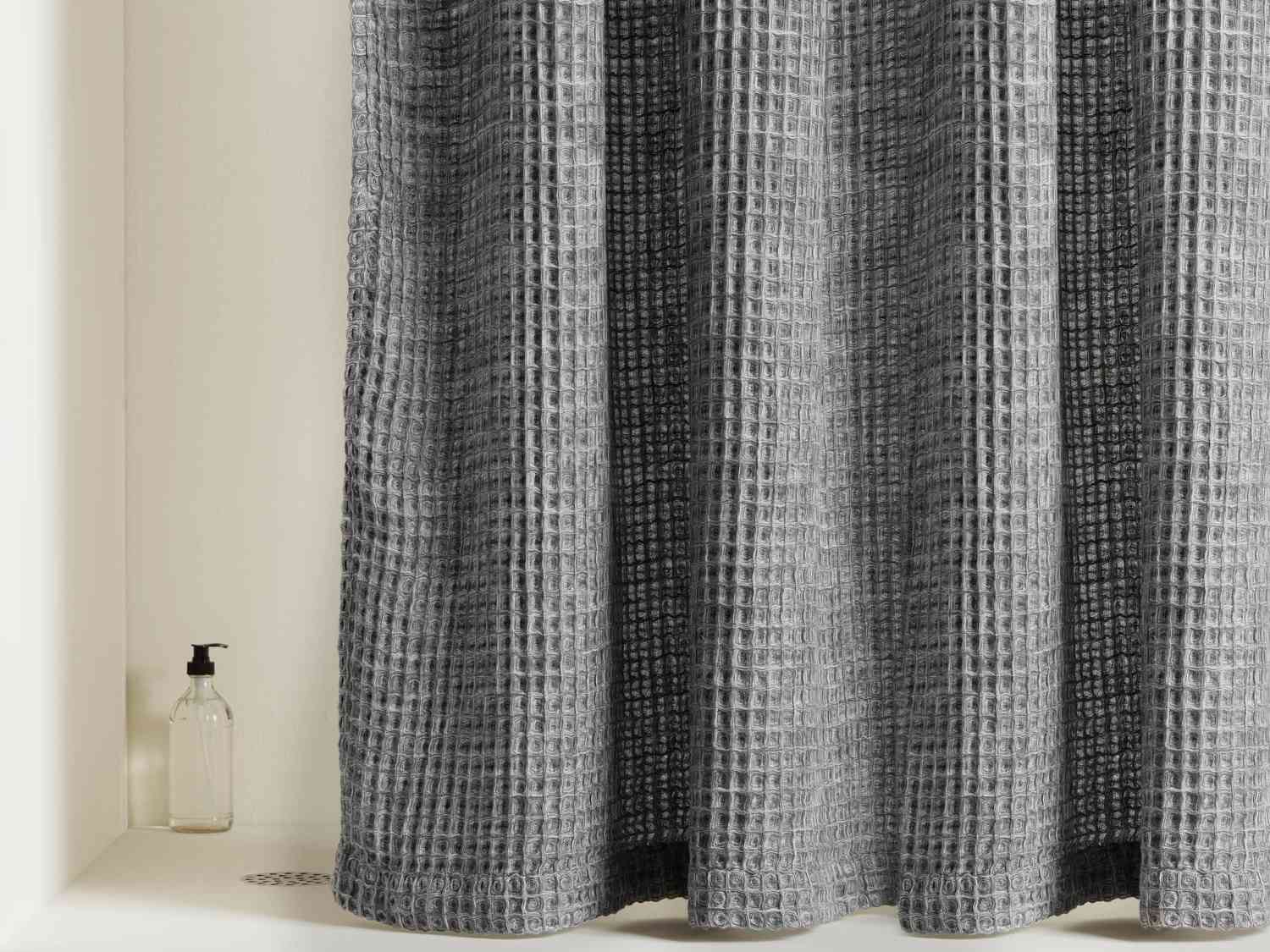 Searching for a solid shower curtain that doesn’t feel boring? Parachute has you covered. The brand’s Waffle Shower Curtain looks a lot like a waffle towel, but it’s larger, thinner, and lightweight enough to hang from your shower rod.

Because this curtain is exclusively available in a sleek pewter gray, you won’t have to worry about making any tough color choices. Instead, you can hang this reliably warm and cozy piece in your bathroom and let it do its thing—while you direct your energy toward adding the finishing touches to your space. 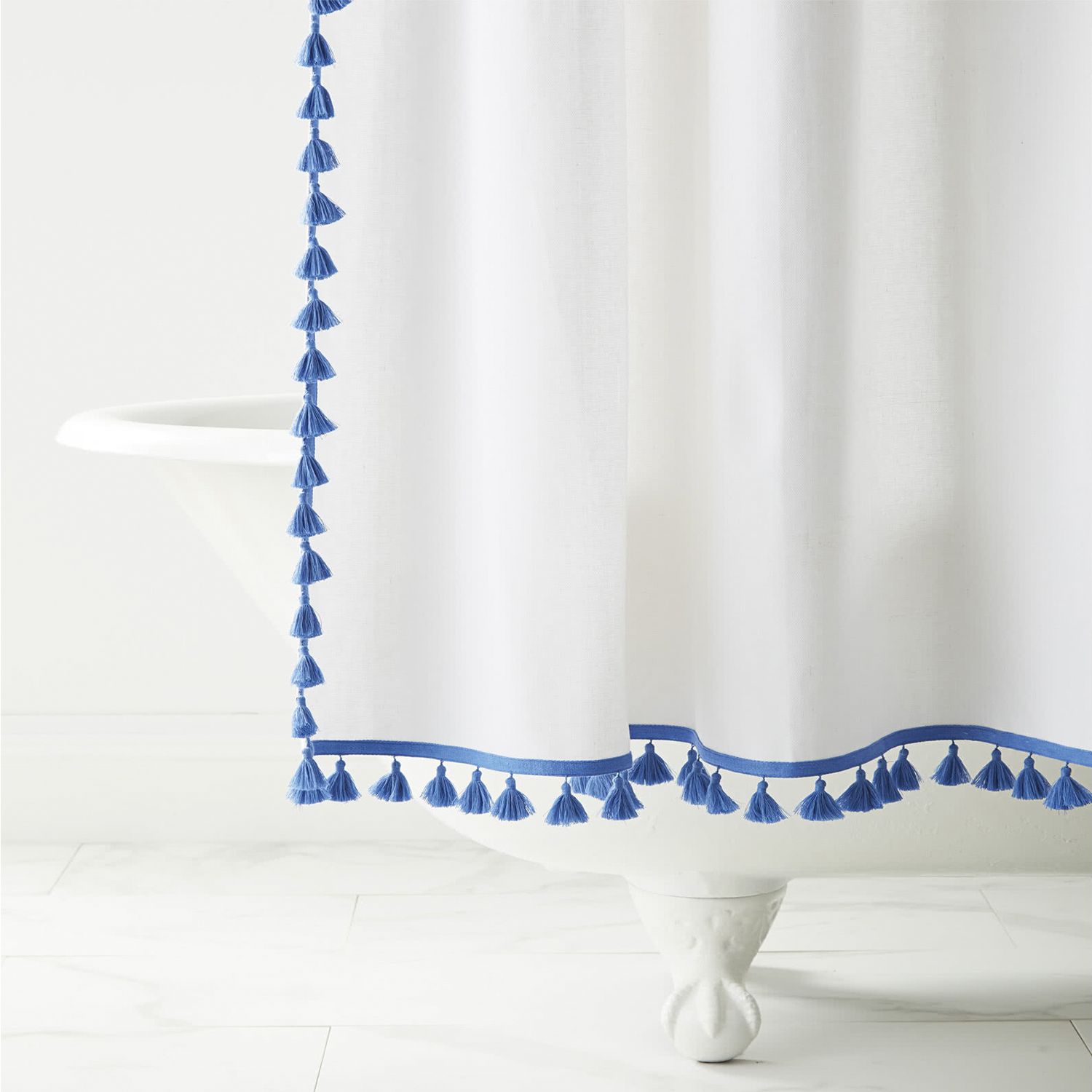 Serena & Lily’s French Tassel Shower Curtain is the perfect pick for the person looking to add a pop—just a pop—of color and texture to their space. This curtain is crafted entirely from crisp white cotton, and its edges are playfully lined with tassels in your choice of color.

Choose between a dark navy lining, a vibrant blue lining, and a subtle gray lining—or keep things minimalist by choosing the barely-there white lining. No matter which shade you pick, you’re sure to end up with something special that will make any bathroom look more sophisticated. 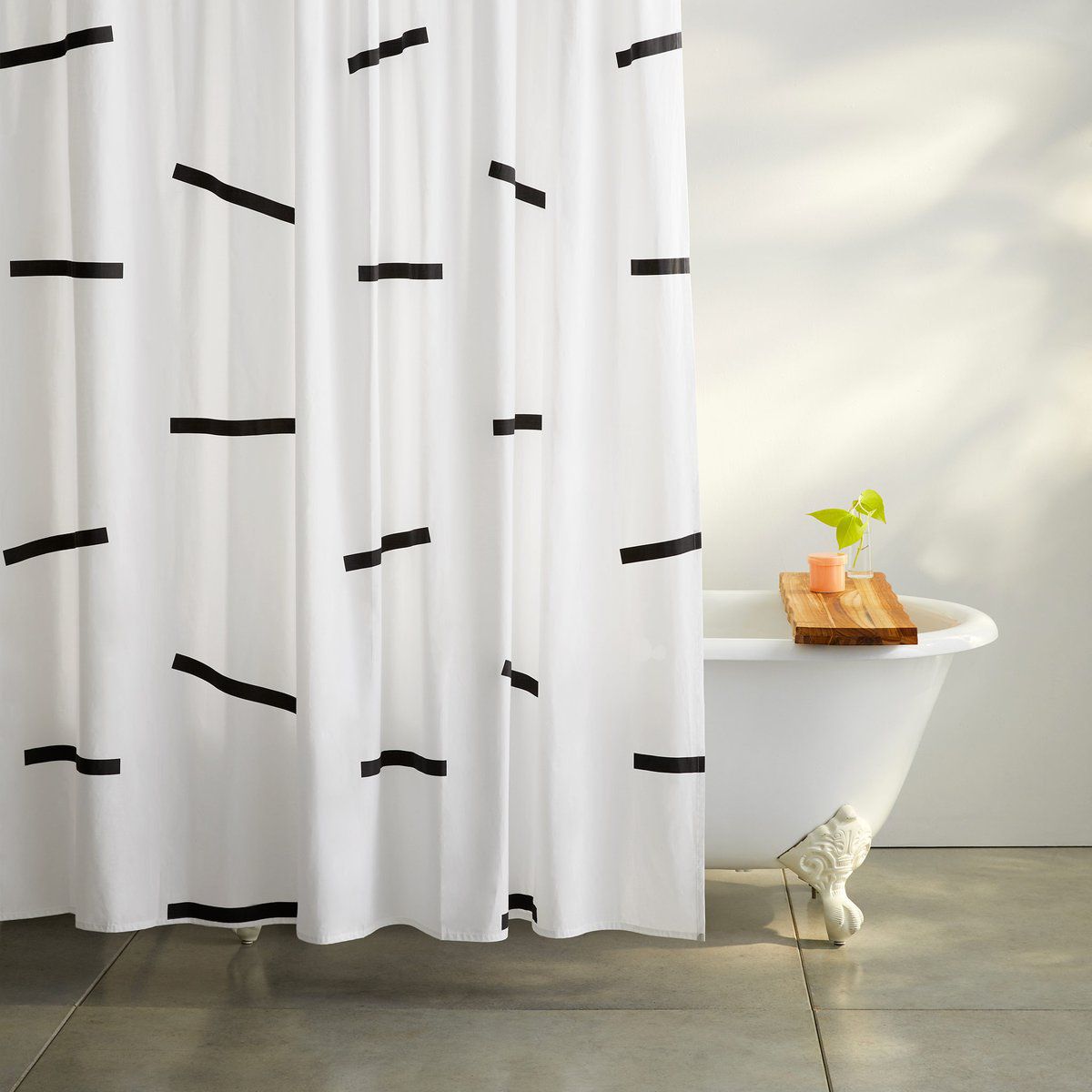 Brooklinen’s Shower Curtain Set will give you everything you need to outfit your bathroom: a cotton shower curtain, a shower curtain liner, and 12 hooks you can use to hang both up. This makes your life a little bit easier, since all you have to figure out is which of their (very cute) designs you want to buy.

Brooklinen offers a subtle pinstripe option, a bold checked option, and a whimsical fruit-covered option. But the best of the bunch is the graphic “Black Dash” pattern. Thick black lines dance across a solid white background, creating a print that’s eye-catching, but not at all overwhelming. 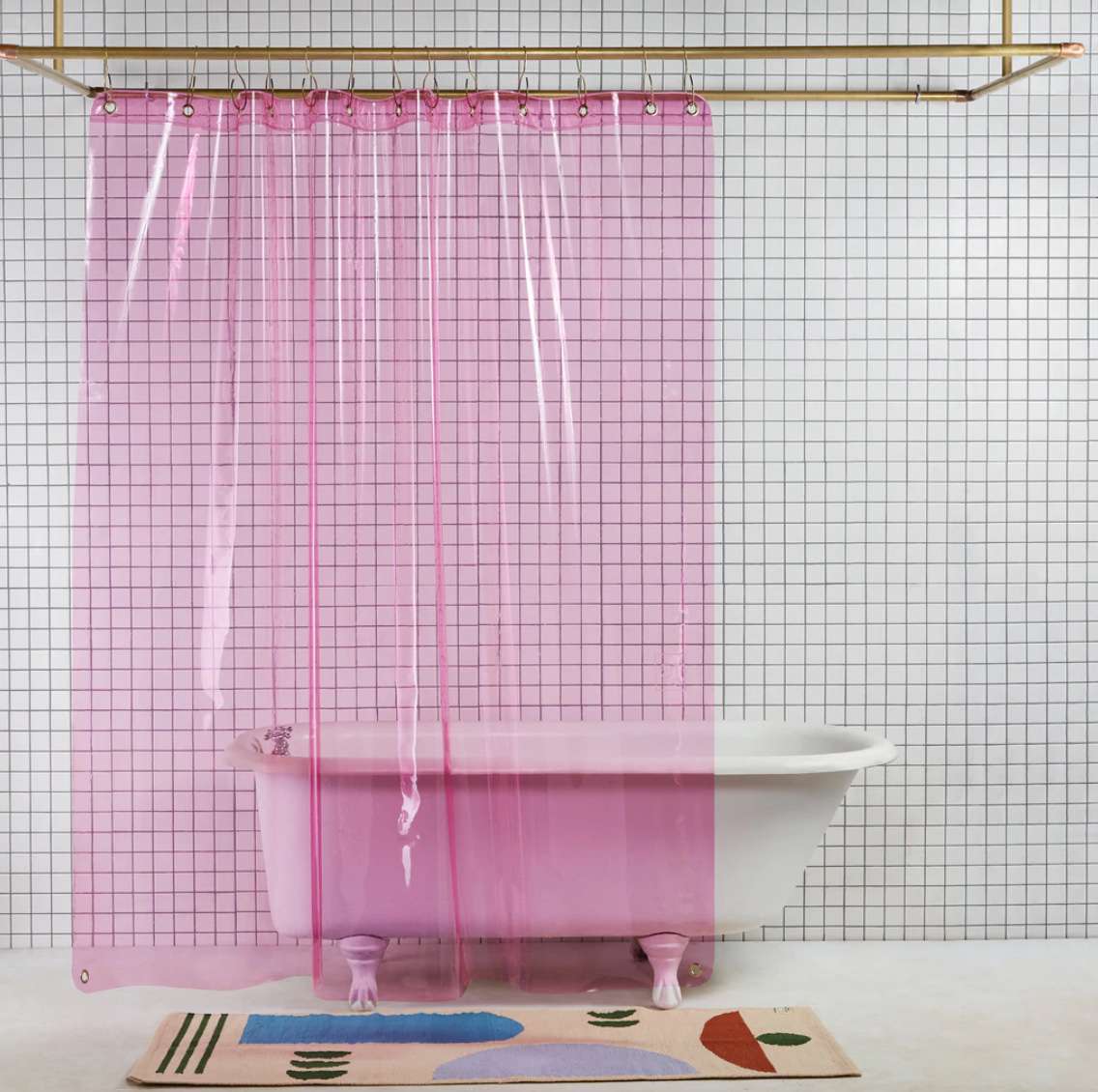 If you don’t need a shower curtain that obscures your view, Quiet Town’s The Sun Shower Atlantic is a particularly fun pick. The curtain is crafted entirely from non-toxic EVA, a rubber-like material that you can see through. Think of it like a semi-transparent raincoat—but for your shower.

The Sun Shower curtain is available in an array of pretty colors, like bright yellow, hot pink, and black. But we love the way the light blue option references the water that will flow through your shower. Pro tip: If you’re not willing to commit to a see-through shower curtain, you can always use the Sun Shower as a liner, instead.