I grew up being lulled to sleep by the San Francisco foghorns until I was lured to Los Angeles by the neon lights, pink sunsets, and quadruple-lane highways. Now that I'm far from home in New York City, I find myself drawn to anything and everything that evokes that elusive and often gritty yet vivid California spirit. Lucky for me, it's arguably one of the most anthropomorphized places in the world, often taking on a more central role in movies, music, books, and even global news and history textbooks than any human character or agents.

Sitting at the edge of the continent, it's a vast and varied universe of a place. In just one day, its roads can you lead you deep inside majestic redwood forests and remote desert vistas drowning in stars, up high mountain peaks, through cities so energetic they seem to have their own living pulse, and to the end of a palm tree-lined highway overlooking the glistening Pacific Ocean. Aside from its obvious beauty, it's also a fascinating place wrought with projections of a broken California dream, too, thanks to its sprawl, drought, and modern-day iterations of the materialism and futility of hitting the Gold Rush jackpot in Hollywood or Silicon Valley.

So if you've recently moved there and are just beginning to get to know it, you've relocated far from home and are missing it, or you've never even visited it before but are curious about it, read these books set in the Golden State. They're California dreaming on tap. 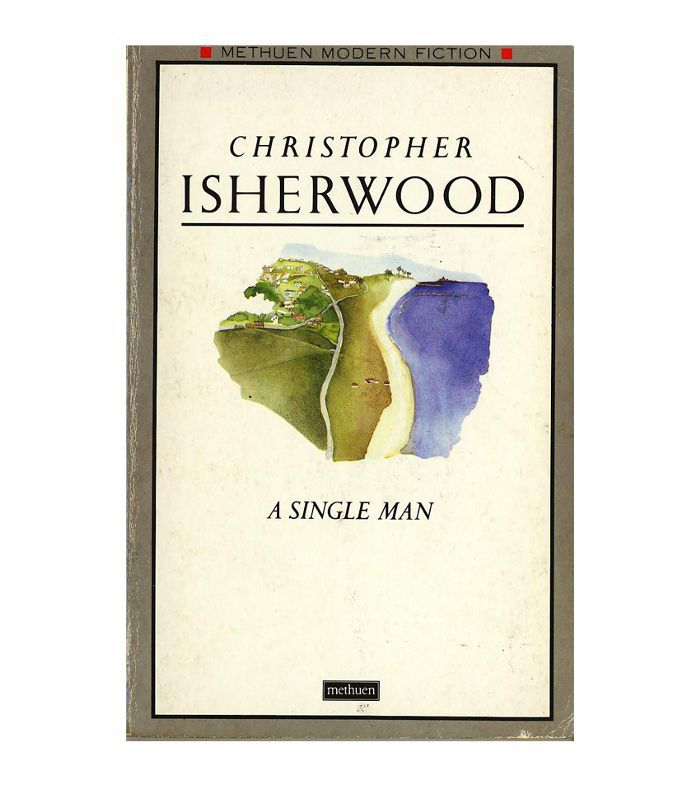 A Single Man spotlights a professor living in Los Angeles during the early 1960s as he attempts to maintain his daily routine after the sudden and tragic loss of his young partner. Taking place over the course of a single day, it's a similar style to Virginia Woolf's Mrs. Dalloway, though rather than a wealthy socialite, we get a glimpse into the interiority of a mature gay man in a very different environment and culture (London rather than L.A.). It's meditative, thoughtful, and moving.

"An afternoon drive from Los Angeles will take you up into the high mountains, where eagles circle above the forests and the cold blue lakes, or out over the Mojave Desert, with its weird vegetation and immense vistas." 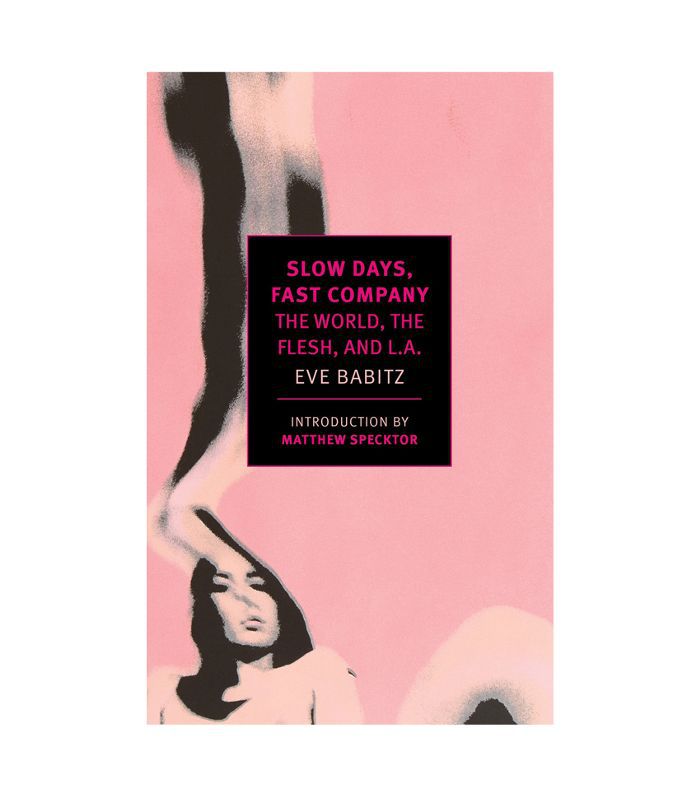 If that title doesn't hook you, we don't know what will—and the rest of the book is full of unabashed, resounding, funny, and blasé wisdom. For anyone who has ever lived in Southern California, this book will take you right back. It's also segmented into short sections marked by the narrator's lovers, both in human and landscape form. Though it gives you a glimpse inside Los Angeles during the '60s and '70s, it feels incredibly resonant today.

"I decided enough was enough, I would be satisfied with just the sunsets in Los Angeles and forget finding the someone I didn't mind. I had a collection of lovers to keep me warm, and my friendships with women, who always fascinated me by their wit and bravery." 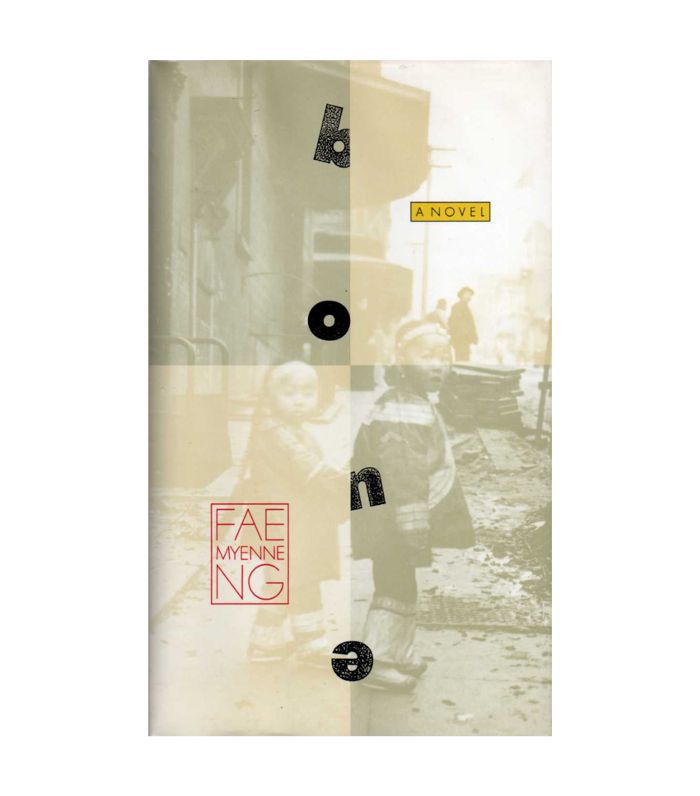 In Fae Myenne Ng's ambitious and moving debut novel, you'll get transported to the heart of San Francisco's Chinatown. Bone is about a Chinese American family navigating the aftermath of one of the daughter's suicides, but aside from being a beautifully written family saga, it also delves into the ways race and immigration play a role in both private and public life. Read this book if you enjoy fiction that also pierces you to the core and teaches you about the history and the ways it maintains a presence today.

"I believe in holding still. I believe that the secrets we hold in our hearts are our anchors, that even the unspoken between us is a measure of our every promise to the living and to the dead. And all our promises, like all our hopes, move us through life with the power of an ocean liner pushing through the sea." 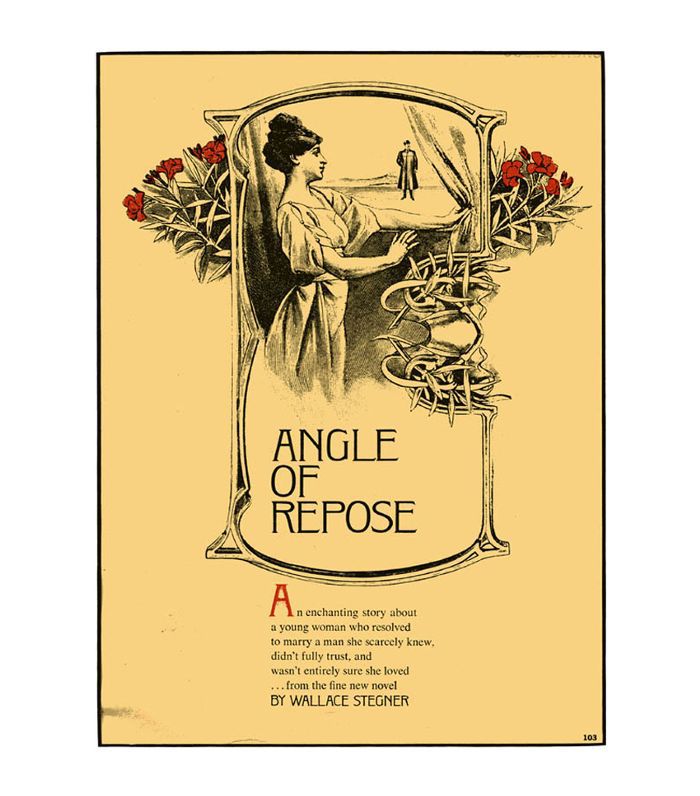 Celebrated as an American masterpiece, Angle of Repose captures the California counterculture of the 1970s with so much poignancy. It's one of those books that's going to stay with you long after you put it down. A retired paraplegic historian sets out to learn about his grandparents' journey to the American West and ends up drawing an incredible portrait of four generations of his family.

"Home is a notion that only nations of the homeless fully appreciate and only the uprooted comprehend." 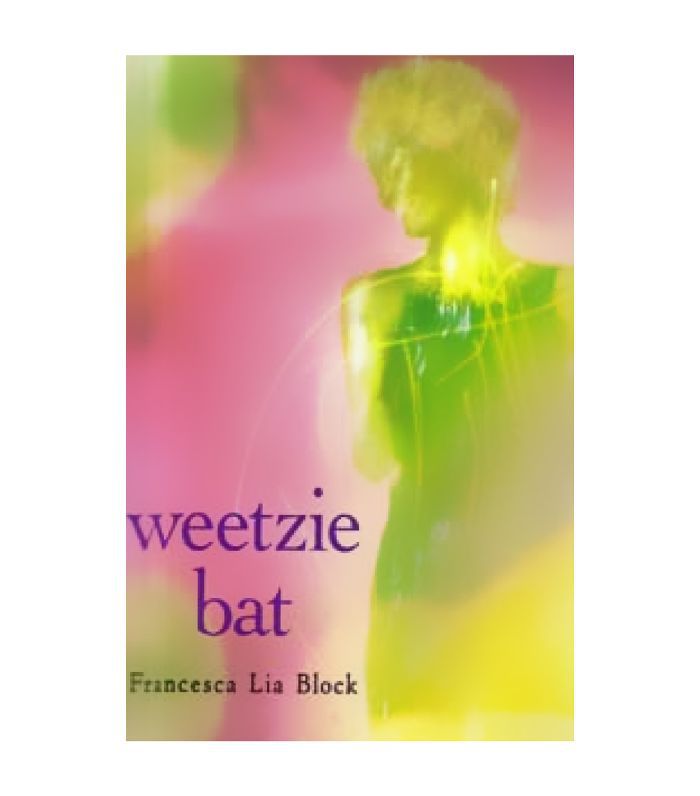 This spirited coming-of-age story is the inaugural novel in Francesca Lia Block's Dangerous Angels series. It follows an L.A.-born and -bred girl named Weetzie and her friend Dirk as they encounter a genie who grants them three wishes. You'll launch into the adventures that follow her wishes and get a taste of what it's like to grow up in Southern California.

"A kiss about palm trees speeding by, trailing pink clouds when you drive down the Strip sizzling with champagne. A kiss about spotlights fanning the sky and the swollen sea spilling like tears all over your legs." 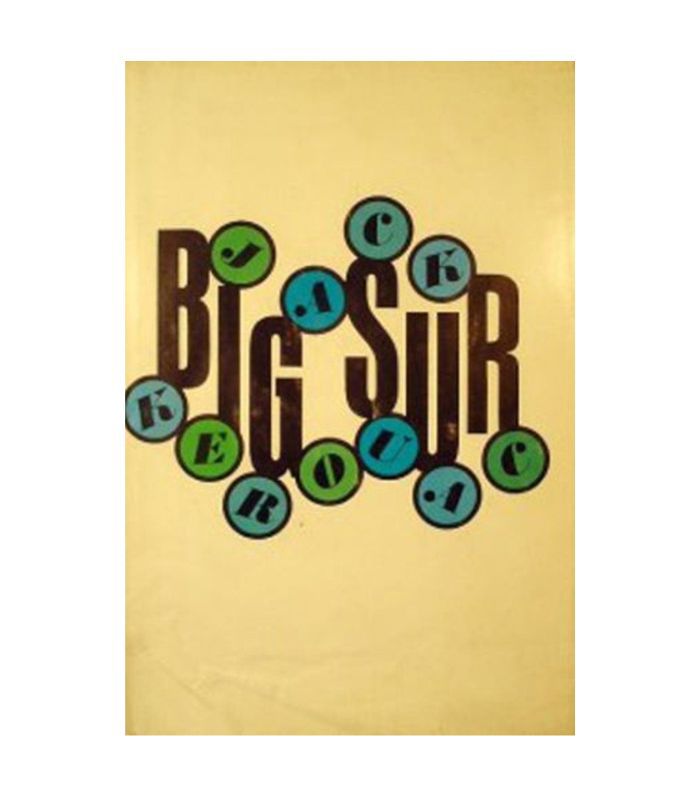 Head to Northern Calfornia in Jack Kerouac's tantalizing novel about his fictional alter ego Jack Duluoz's deteriorating lifestyle as he hops between wild nights in San Francisco and quiet, solitary days in his cabin in Big Sur. Rather than emphasizing the free-spirited beauty of the 1960s Bohemia, Big Sur delves into the darker side of success and fame as Duluoz gains more and more recognition in the literary world. Though it isn't exactly an uplifting book, it does an incredible job representing both the beauty and the grit of San Francisco and the surrounding wilderness.

"And when the fog's over and the stars and the moon come out at night it'll be a beautiful sight." 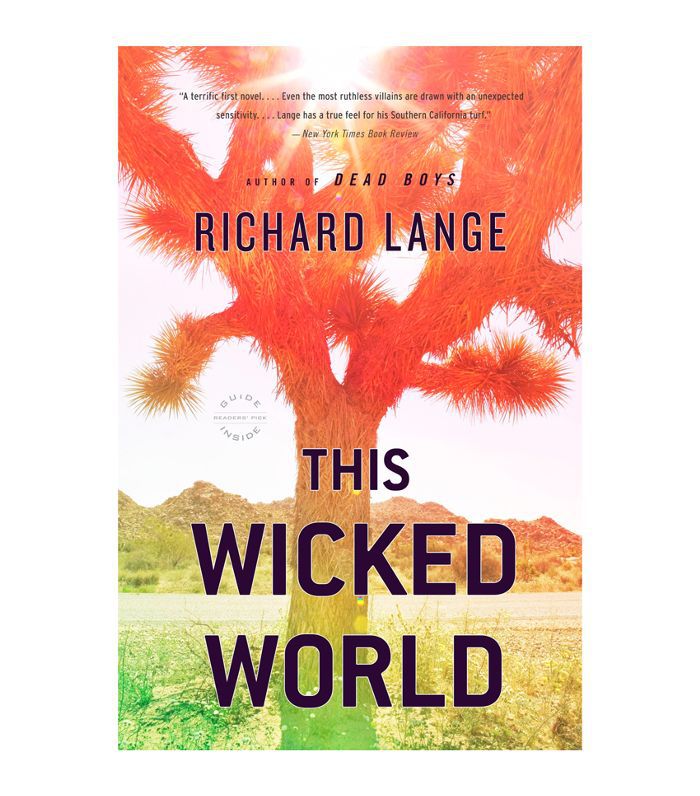 In this classic L.A. noir story, a rough-around-the-edges but soft-in-the-inside former marine and bodyguard to Hollywood stars gets a fresh start after a stint in jail. Of course, it doesn't take long for him to get into more trouble. He becomes obsessed with investigating the mysterious death of a young boy who he believes has been wrongly vilified.

"Los Angeles is not its haughty self in the rain." 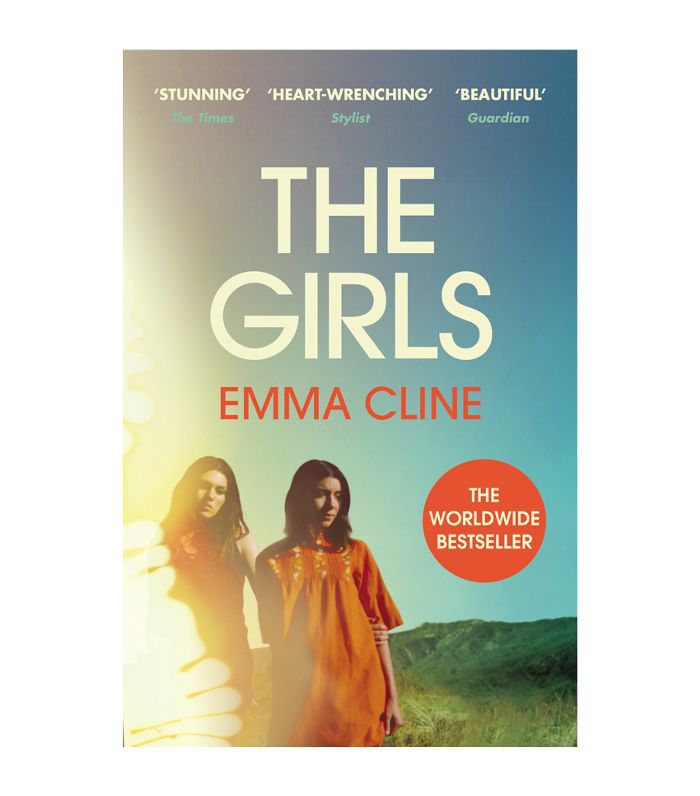 Emma Cline's debut novel paints a vivid image of teenage vulnerability and the power of manipulation, mirroring Charles Manson's cult, except this time the girls following the Manson-like leader are in the spotlight. It transports you to the San Francisco Bay Area in the '60s, pulling you into a world that's simultaneously alluring and grotesque, idyllic, and widely dystopian. Though a bit of a thriller at times, it's also something that most young girls can connect with, thanks to Cline's expert ability to capture girlhood.

"So much of desire, at that age, was a willful act. Trying so hard to slur the rough, disappointing edges of boys into the shape of someone we could love. We spoke of our desperate need for them with rote and familiar words like we were reading lines from a play. Later I would see this: how impersonal and grasping our love was, pinging around the universe, hoping for a host to give form to our wishes." 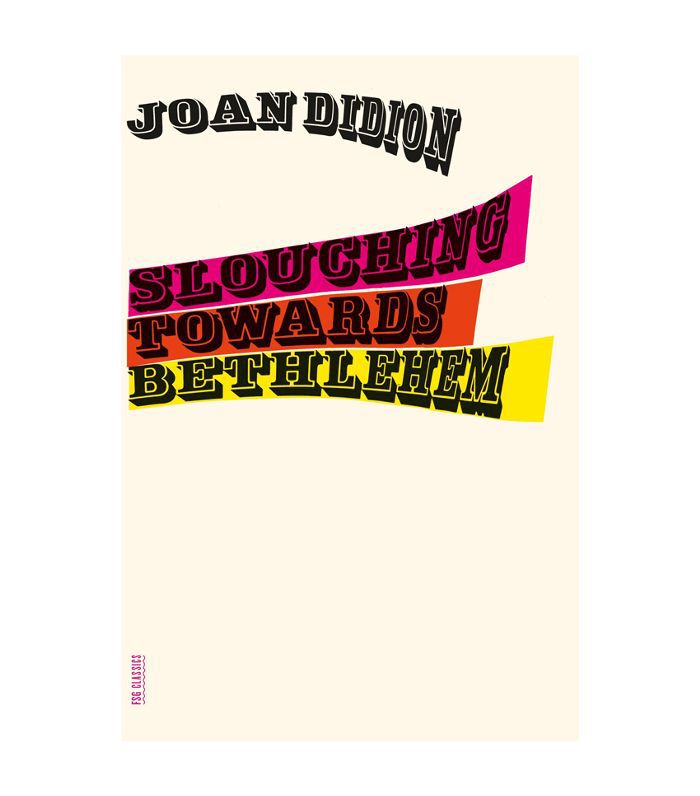 Joan Didion epitomizes California cool and is an icon in the fashion and publishing worlds alike, and Slouching Towards Bethlehem is easily one of her best classics. Though it's a collection of essays, it reads more like an entertaining collection of short stories. "Goodbye to All That" is a great place to start). Her essays on the Golden State are some of her best. She masterfully captures the tensions and intersections of dystopia and utopia in her seminal essay "Some Dreamers of the Golden Dream." And if you're fascinated by the Summer of Love, you should opt for her investigative piece on the culture of Haight-Ashbury in Slouching Towards Bethlehem.

"You might protest that no family has been in the Sacramento Valley for anything approaching 'always.' But it is characteristic of Californians to speak grandly of the past as if it had simultaneously begun, tabula rasa, and reached a happy ending, on the day the wagons started west. Eureka—'I have found it'—as the state motto has it… My childhood was suffused with the conviction that we had long outlived our finest hour." 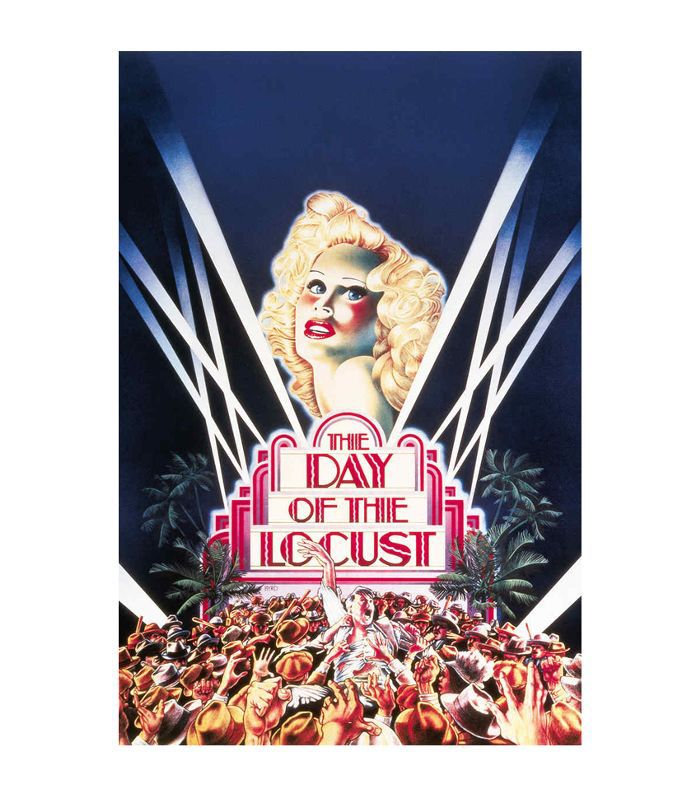 Written in 1939, Nathanael West's The Day of the Locust is about a young graduate from the Yale Institute of Fine Arts as he heads out west to work on set designs for a production company in Hollywood. Soon, the artist starts working on a painting about a violent holocaust that destroys L.A. And when he's not working, he's hanging out with his new group of friends, who are a cast of Hollywood tropes. It's basically about the futility of the American dream, and more specifically, the California dream.

"And 'The Burning of Los Angeles,' a picture he was about to paint, definitely proved he had talent." 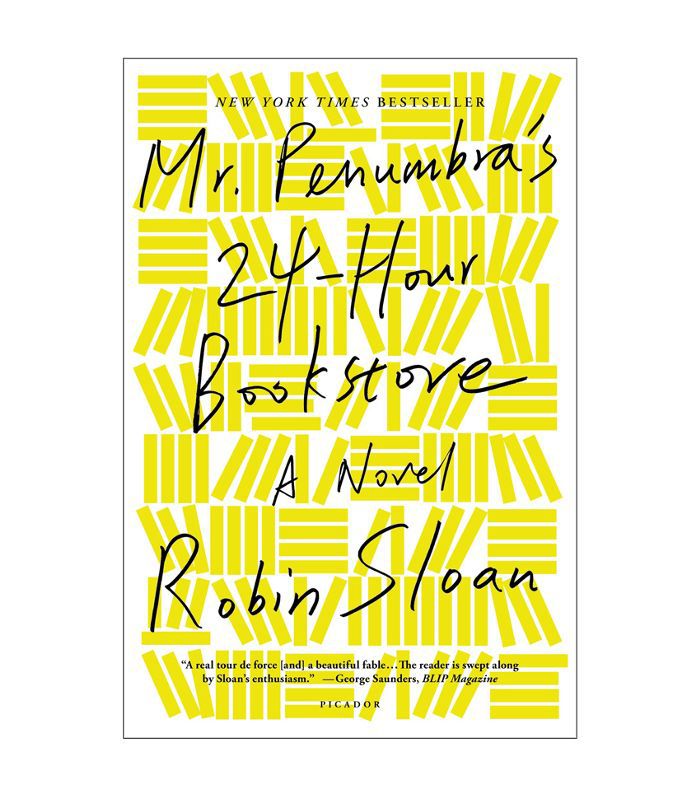 If you love contemporary fiction and San Francisco, pick up Mr. Penumbra's 24-Hour Bookstore. In this dazzling, gripping, and experimental novel, you'll get to know Clay Jannon as he reroutes his life in San Francisco during the Great Recession when he's laid off from his tech job in Silicon Valley. He takes a job at a local bookstore but soon discovers that it's more than just your average shop. There's a mystery, fantasy, real-world insight, and plenty of magic in these pages.

"All the secrets of the world worth knowing are hiding in plain sight." 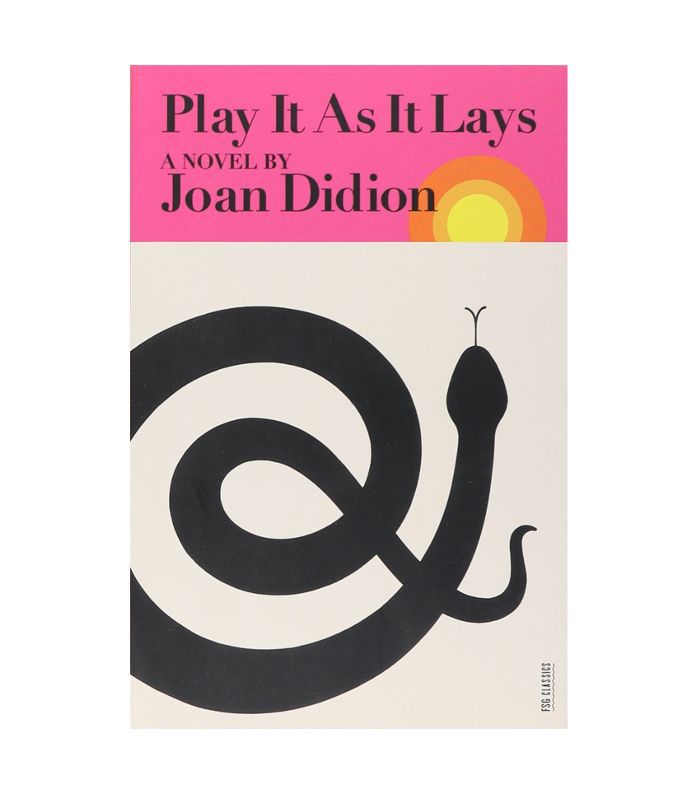 Sacramento-born Joan Didion deserves two books on this list since she manages to capture Hollywood better than almost anyone. This one takes place in 1960s Hollywood and is told in first-person vignettes that will enthrall and haunt you. As a California native, Didion eloquently captures both the beauty and the danger of Southern California. Though it's a fun read if you want to get a taste of the place, it's also just a gripping tale full of searing insight. And the tight, controlled language she employs to convey the disturbing actions that unfold is unparalleled.

"It was essential (to pause was to throw herself into unspeakable peril) that she be on the freeway by ten o'clock. Not somewhere on Hollywood Boulevard, not on her way to the freeway, but actually on the freeway."

Next Up: Where I Was From 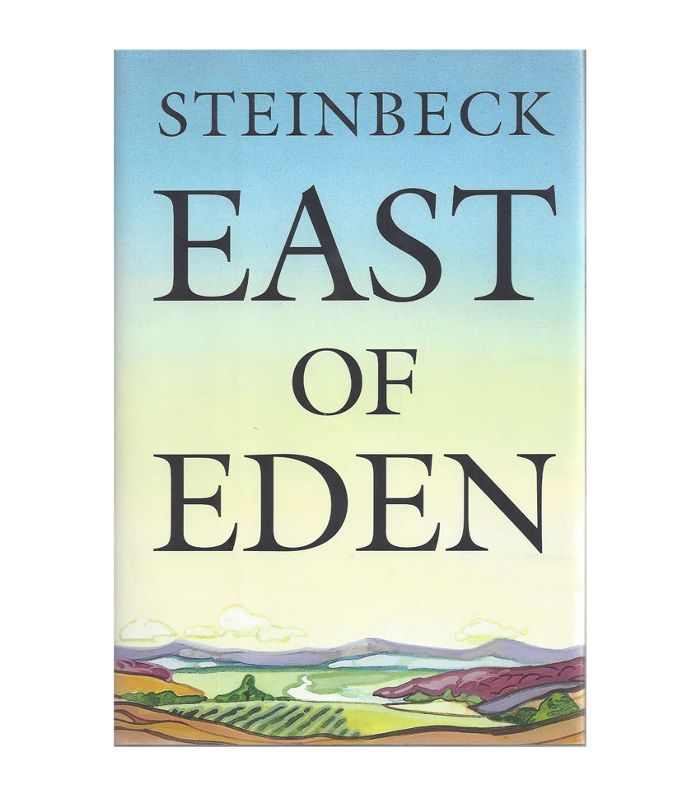 John Steinbeck's East of Eden is essential California reading. It's about two families living in Salinas Valley, California, during the early 20th century as their lives start to mirror the stories of Adam and Eve and Cain and Abel. Considering the violence and gut-wrenching fates that play out in those stories, you can expect plenty of brutalities. Though it's a biblical allegory in many ways, Steinbeck's characters are rich, unique, and fresh while the book paints an intimate portrait of California as well as its symbolic promise versus its often harsher empirical existence.

"My imagination will get me a passport to hell one day."

Similar Read: The Grapes of Wrath