Beyond "Brogrammers": 3 Unsung Women Who Made the Internet

If you had to visualize the people who created the first computer, deciphered early codes, and imagined the internet, what would they look like? Perhaps it involves two guys in turtlenecks tinkering in a garage. Or maybe a gang of Alpha nerds in Silicone Valley. The male-centric narrative we're taught about the history of technology has one fatal flaw, says author Claire L. Evans—it misses part of the picture.

"The history of technology that you probably know is one of men and machines [and] garages and riches," Evans writes in her new book, Broad Band: The Untold Story of the Women Who Made the Internet. But female visionaries have been there from the start. "They've just been erased from the story until now."

Evans's new book tells the story of lesser-known women who lead the technology and innovation boom: the female programmers, girl gamers, cyberfeminists, and more. "Many of the women profiled in the book did some of their best work while nobody was looking—for their own reasons, to serve their own communities, or for the sheer love of the technology," she says. So in honor of our #PressForProgress pledge in the wake of International Women's Day, we thought it timely to spotlight three fierce women whose stories deserve to be told. Meet the women who helped make the internet what it is today. 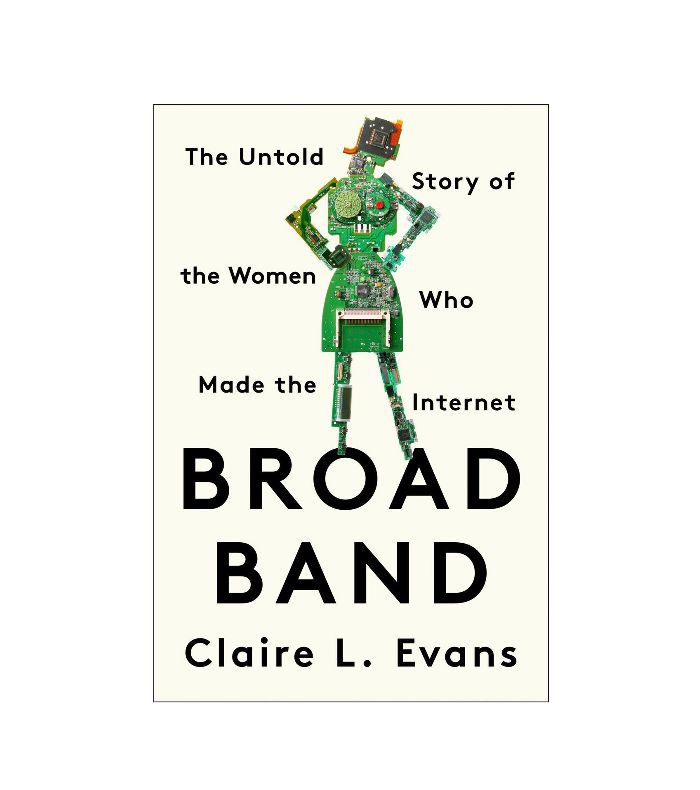 Claire L. Evans Broad Band: The Untold Story of the Women Who Made the Internet $18
Shop

Who: Grace Hopper was a computer scientist and United States Navy rear admiral. To say she was an overachiever seems to fall short: Hopper was awarded 40 honorary degrees from universities across the world, has a college at Yale named in her honor, and was awarded the Presidential Medal of Freedom by Barack Obama.

Her Contribution: When you picture the first computer programmer, who do you imagine? Hopper was 38 years old when she arrived at Harvard, assigned to be one of the first programmers of the Mark I computer during the war. With a background in mathematics, she wrote code that solved some of the war's toughest mathematical problems and even penned a manual for using the computer.

Why It Matters: Her legacy was humanizing and democratizing computers. "She pushed for programming advances that would radically change the way people talk to computers," Evans explains. "With her help, they wouldn't need advanced mathematical terms or even zeroes and ones. All they'd need is words."

Her Contribution: The internet wasn't always an inclusive space for women. In fact, when Rhine worked at virtual community WELL, she admits she was shocked that the readers were "so glaringly obviously 90% white men, probably in their early 30s." She imagined an online space that connected women, told their stories, and provided a place for them to share information, so Women's Wire was born.

Why It Matters: Rhine proved that there was demand for women's content on the internet. A former coworker at AOL told her "women will never use this tool," and The Wall Street Journal called women's interest a "niche market." Women.com proved the internet wasn't a boys' club and that women wanted to be a part of the conversation.

Who: Brenda Laurel is a pioneer in developing virtual reality and an advocate for diversity in video games. She is one of the earliest female game designers.

Her Contribution: For years, video games were considered the domain of young boys. Laurel interviewed nearly 1000 children over four years and found there was little science behind this gendered move. "There was no research to substantiate the claim that girls were somehow inherently less skilled in computer play," Evans points out. "Little girls didn't play computer games because the computer games were all for boys."

Laurel created one of the first video games for girls, Purple Moon. Unlike Barbie programs, which she describes as "the computer game equivalent of pink Legos," Purple Moon focused on teaching gamers to navigate social situations and the complexities of being a young girl.

Why It Matters: Laurel's research and game designs made others think twice about creating tech products exclusively for boys. While there is still a significant gender gap in STEM fields, it was one of the first positive steps to encourage young girls to engage with technology and see it as an inclusive industry.

"The more diversity there is at the table, the more interesting the result onscreen, the more human, the better," writes Evans. Creating digital products for women, building communities for them, and welcoming them into jobs are the first steps toward progress. "There's no right kind of engineer … no right education, no right career path," she says. "The internet is made of people, as it was made for people, and it does what we tell it to do. We can remake the world."