My Design Journey: Caitlin Flemming on Her Bestselling Book, Eclectic Style, and Gaining Confidence as a Designer

One of the words San Francisco-based designer Caitlin Flemming uses to describe her aesthetic is “effortless,” and the same can be said of how she appears to have floated between industries—from blogging to interior design to becoming a bestselling author and, perhaps in the future, a textile designer. As part of our series, My Design Journey, we spoke with Flemming about cultivating her eye for design, pattern mixing, and stylish souvenirs.

On Her Early Influences

As a child, Flemming lived in Mexico City with her mother, a teacher and historian, and her father, an environmentalist and the president of the World Wildlife Fund for Mexico and Central America.

“I would travel all over with my dad on these incredible trips, where he was working in nature and preserving sites. Other kids would be at summer camp and I was in the rainforest with monkeys,” Flemming says. “I was immersed in all of these different cultures.”

When she was nine, her family moved to Portland, Oregon, where her mom became an antiques dealer.

“We were always at flea markets and I really credit my mom in training my eye,” Flemming says. “When we would travel, she would say, ‘Look at the architecture,’ and point out all these details. That’s how I grew into design.”

On Her Decision Not to Go to Design School

Although Flemming loved design from a young age, she decided to double major in international business and marketing at the University of San Francisco in case design “didn't work out.” Post-grad, while employed as a community manager at a publishing company, she was introduced to blogging.

“I was working with bloggers and saw how they were sharing all of their inspiration,” Flemming says. “I thought 'this is what I should do'.”

Soon after, in 2009, she hit publish on her first post for “Sacramento Street.” Then, while still growing her blog, Flemming became a design assistant and the social media guru for Kendall Wilkinson.

“Because I didn’t have the school knowledge, I was willing to research and find out how to do it. I also asked a lot of questions of the other girls and everyone was so open and willing to teach me,” Flemming says. “I just had to put in the leg work.”

Even though having a formal education may have made things easier at times, Flemming says she has no regrets.

“Sometimes I think 'I wish I went to design school so I knew how to do this,' but because I’m able to run my business, I’m able to hire people to help me with those things which is amazing because you’re just bringing more knowledge and different skill sets to your company,” Flemming says.

On Striking Out on Her Own

There were a number of factors that went into Flemming’s decision to start her eponymous design firm. Three years of blogging had yielded brand partnerships and a few design clients. Still, she was nervous.

“I thought: 'What if I make nothing?' or 'What if it all goes away?'” Flemming remembers. “Finally my husband and I were like ‘OK, we don’t have kids and we could live off his salary if we had to’ and I thought 'If I don’t try it now, it might never happen.'”

Encouragement from other designers helped, too.

“Grant Gibson here in San Francisco saw my very first apartment,” she says. “He was like, ‘Why are you not a designer?” and I said, ‘What do you mean? I am! I work for Kendall Wilkinson.’ His response was, ‘No, no, you need to go out on your own. You have a really good eye.’”

“Walking into a new client’s house, I can picture a whole room in under a minute,” she says, adding that the learning never stops. “Being a designer you’re constantly educating yourself because there’s all these amazing new ways to use or create product for our clients. I’m constantly pinning and Instagram tagging different things. I look at how designers in different countries are using products. My mom and I buy so many different books and magazines.”

On How Travel Home Came About

Flemming had been approached before about writing a book but brushed it off because she didn’t know what she would write about. Then, her mom floated the idea of writing a book together. They reflected on their shared love of travel and how it played a role in their homes.

“Then we thought, 'Why are we just limiting it to ourselves? We should reach out to people who have inspired us and who get inspired by traveling',” Flemming says.

They put together their dream list of interviewees, including designers like Nate Berkus and Carolina Irving. Then, they hired a book agent and sent in a proposal.

Since hitting shelves in 2019, Travel Home: Design with a Global Spirit has continuously been an Amazon bestseller and often appears in the background of other designer’s and design enthusiast’s homes on Instagram. You may have also seen it photographed alongside the McGee & Co. Target collection. In other words, the book is everywhere. 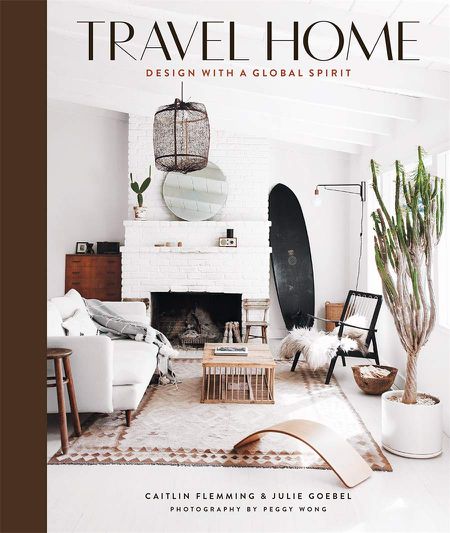 Flemming is thrilled with the attention but also proud of how the book has become a resource.

“We’ve had so many people reach out to us about actually reading our design book, which makes me so happy because I feel like sometimes people just flip through the pretty pictures but there’s so much knowledge in our book about where these designers get their inspiration from and how to use it in your home,” Flemming says.

On Listening to Your Gut

As one might expect, in working on their book, there was a lot of back and forth with the publisher.

“Being a designer, I knew exactly what I looked for in the binding of a book and the cover of a book. I thought about how things are styled and what it would look like if they did an overhead shot,” Flemming says.

Her and her mom wanted a dark chocolate-colored binding that would stand out. They wanted the title to be in a large font and there was a certain feeling they wanted the cover image to evoke.

But they were told their vision wouldn’t sell.

“[The publisher] kept coming back with other suggestions and I was like, ‘No, no, no, this isn’t going to work.’ Finally, they caved after so many revisions because I think they realized I wasn’t going away and I wasn’t backing down,” Flemming says, laughing. “I really had this instinct.”

On Gaining Confidence as a Designer

Flemming hasn’t always been so confident, but says the experience with the book was reassurance that she really does know what she’s talking about.

“There were times when I would kind of not push back if the client didn’t want to go in the direction that I thought they should go because I thought, 'Well, you know they hired me, so maybe I should listen to them or Maybe I didn’t think about how they live,'” Flemming says. “I finally feel that sense of confidence in knowing how rooms should be designed and envisioned from the get go.”

And now, having discovered her on Instagram or read her book, more and more people are hiring Flemming specifically for her personal aesthetic, which she says can be described as neutral, serene, effortless and collected.

“I embrace that last word—'collected'— for every client because I feel like that’s what brings a story to a home,” she says. “It’s the items that are a conversation starter.”

On Incorporating Finds From Your Travels

On the road, it’s easy to get lost in the moment and scoop up every pretty thing in sight, but what looks great in the context of a colorful market, might not actually work in your home. To avoid impulse buys, Flemming advises keeping your space in mind and remembering that you only have so much room.

“My mom always says, ‘Let’s go have lunch and think for a minute about what we actually want to get.’ Now, with antiques and that sort of thing, it’s a little bit harder because you don’t know if it’ll still be there,” she says. “It’s a risk, but thinking back to your home and how you might use it is really important.”

So, what are some of the things Flemming is always on the hunt for?

“I love collecting textiles on trips. They are very easy to squeeze in a suitcase and they add so much dimension to a room. I've collected them in Morocco, Istanbul, France, Portugal and many other places,” she says. “I also try to find special pieces, like the child-sized Moroccan slippers I treasure. I will never part with those!”

Some people are hesitant to buy antiques or finer furniture when they have kids around, but that doesn’t phase Flemming.

“I'm a big believer in having kids exposed to nice surroundings,” she says. “Obviously we've had our fair share of mishaps. Recently, my son drew a square on the back of my favorite chair with a marker. He was so proud of it, how could I be mad? So I have just slung a throw blanket over the chair to conceal the ‘art work.’”

“The kids have gotten ketchup on them and it comes right out,” she says. “All of those washable rugs? That’s what my friends get and they tell me they stain so easily.’”

On Redecorating With What You Already Own

Flemming recently moved and says followers have commented on how she’s reinventing pieces by using them in different rooms in different ways. It’s a habit she picked up from her mom.

“She’s always moving things around and not actually purchasing or acquiring new things,” Flemming says. “When people see all these designers updating things, they wonder how they have all these funds and can’t relate to it. I’m trying to be more sustainable in my designs and get my clients to not think of things as so disposable.”

That’s not to say Flemming’s style hasn’t changed over the years.

“I have definitely evolved but I remain true to one of my core beliefs in decorating: mixing old with new. I love seeing antiques mixed with newer items. It keeps it from feeling like a grandmother's home, but adds a deeper connection to the past and helps it to not come in and out of fashion,” she says. “I am a great believer in working with what you have and adding things slowly.”

“I am loving more pattern on pattern design. I just recently recovered my bed in a beautiful paisley by Peter Dunham. And I added a vintage chaise from Elsie Green to the living room covered in Les Indiennes fabric. A year ago, I didn't use much pattern and I'm loving this new addition. My most recent design project, I'm calling ‘Miss Marple Meets Northern California.’”

Flemming is toying with the idea of writing a second book. She says she’d also love to create a textile collection.

“Spread the word: who wants to work with me?,” Flemmings says, with a laugh. “I’m obsessed.”

She’s fallen in love with fellow designer’s work like Carolina Irving, Penny Morrison and Heather Taylor, and—coming full circle—is also inspired by nature and her time growing up in Mexico.

“Talking to Carolina, she studies botanicals and that’s how she comes up with her patterns,” Flemming says. “All of that is so interesting to me.”

It’s too early to say what Flemming’s collection might hold, but it’s sure to be worldly and sophisticated, just like her.

My Design Journey: Ariel Okin on Being 'Traditional With a Twist'