Looking to broaden your floral know-how? MyDomaine tapped Jane Field-Lewis, stylist, art director, and author of Anthology of Flowers to find out which flowers can brighten your bouquet this season and your palette. Ahead, Field-Lewis shared some of the most beautiful stems to add to your vase and your meal. We guarantee you'll love these 10 flowers that are truly pretty enough to eat.

If you believe in the power of magic, then you'll be just as enchanted by the visceral beauty of the humble flower. Its exquisite appearance can leave one breathless, mesmerized by its intricate detail, while it's sensual aromas can trigger childhood memories or nostalgia long forgotten until that inhalation. It's this inexplicable emotion flowers stir in all of us that compelled stylist, art director, and costume designer Jane Field-Lewis to pen her first book on the subject, Anthology of Flowers.

Award-winning photographer Richard Maxted used a unique illustrative photography technique to capture the 50 flowers while MyDomaine's in-house illustrator, Stephanie DeAngelis, brought them to life in animated form. In this exclusive excerpt from the book, we share the section on edible flowers, which highlights how they're used as ingredients, along with a compelling look at their history. It's a visual feast.

“Labelled ‘the ultimate multi-purpose plant’ by the Telegraph in 2012, lavender has an impressive list of attributes. For more than 2,000 years, this hardy member of the mint family has been used for everything from mummifying bodies and protecting against plague, to relieving Queen Elizabeth I’s migraines.

“It’s the heady combination of flavor and fragrance, however, that gives it such enduring appeal in the kitchen: honey, cakes, and teas are the main foodstuffs to benefit, but the blooms can also be crystallized for use as delicate baking decorations, or even paired with cheese.

“In the Elizabethan age, lavender was the traditional flower of love and featured in wedding bouquets because it was believed to bring luck in marriage. That good fortune started from Day 1 – the wedding night – with the flower’s supposed aphrodisiac qualities seeing it regularly lining the bedsheets. So Queen Elizabeth ought never to have complained of having a headache.”

“With their punk spikes and vivid colors, a safflower’s blooms are difficult to ignore. The ancient Egyptians were huge fans, and the expressive plant became a staple of garlands placed on mummies. Japan also embraced it: from early times it has featured in songs and poems, as well as facilitating traditional Japanese textile dyeing crafts. Later, East Indians used the safflower’s crimson dye as their official ‘red tape’ on legal documents.

“It gives color in the kitchen, too, its flowers lending dishes a light yellow-orange hue – alongside a subtle earthy flavor. For this reason, it is sometimes used as a cheap substitute for saffron and has earned the unfortunate nickname 'bastard saffron' as a result.

“Safflower comes into its own as an oil, however. Flavorless and, in this form, colorless, it is nutritionally similar to sunflower oil. Salad dressings, cooking oils and margarine production processes all depend heavily on it.”

“The next summer day when you’re sipping a fragrant cocktail, like Pimm’s and lemonade, spare a thought for the humble borage, which has probably been replaced by a long sliver of cucumber peel in your glass. Traditionally, however, this blue, star-shaped bloom was the preferred garnish, imparting a similar flavor to that of its vegetable successor. It is a botanical favored by many artisanal gin distillers.

“Candied and made into a conserve, the flowers can also be put to medicinal use and were historically given to people weakened by prolonged illness or susceptible to swooning. John Evelyn, the seventeenth-century English herbalist, clearly found the plant to be a useful placebo, wondering at its ability to ‘revive the hypochondriac.’

“Although found in most parts of Europe now, borage originally hails from Aleppo in Syria. You’ll be able to distinguish it from close plant relatives by the distinctive beauty mark in its center, made from a small cone of black ‘antlers.’ Furry stems and leaves are also a feature of borage – something thought to have inspired its name, which is derived from the Italian ‘borra,’ signifying hair or wool.”

“Easy to grow and producing delectably frilly flowers, the carnation has become a staple of most floral arrangements and bouquets. It’s far less familiar in the kitchen, however, which is a shame, because the petals are edible and can supply color to salads and sophistication to cake decoration. Look to France for an alcoholic spin on the ingredient – here it’s used in chartreuse, a liqueur that has been made by the Carthusian monks since 1737.

“As well as in monasteries, the flower can be spied in Christian art too, having been depicted by Leonardo da Vinci in the late 1470s. His Madonna of the Carnation shows a young Virgin Mary with a naked baby Jesus on her lap. Her left-hand holds the carnation, which is often interpreted as a healing motif.

“Playwright Oscar Wilde imbued the carnation with still more symbolism when, for the first performance of his play Lady Windermere’s Fan on 20th February 1892, he asked one of his actors – plus certain friends in the audience – to wear a green carnation in their buttonholes. It has since become emblematic of gay pride.”

“Walk past the pâtisserie windows of Toulouse, and you won’t have to go far before spotting a viola inside. Petite, pretty and slightly perfumed, the viola has been candied here for centuries. Indeed, so strong is Toulouse’s association with this flower, that it was once called ‘la cité de la violette.’ Once picked, the flowers are mummified in hot syrup, which is stirred until the sugar recrystallizes and dries. They’re popular in cake decorations and are especially tasty paired with chocolate.

“Nations around the world enjoy consuming the viola, helped by the fact that it is so easy to cultivate. Often confused with the pansy, the viola grows to a much smaller, compact size, making its five petals (four upswept, one pointing downward) more weather resistant. If you stoop low to breathe in its perfume, however, you may be in for a surprise. Violas contain the compound ionone, which temporarily disables the nose’s ability to smell the flower. For that reason, parfumiers often describe the viola as having a ‘flirty’ scent, because the fragrance teasingly comes and goes.”

“The well-named rocket is mainly grown for its distinctive, nutty-flavored leaves, which become more peppery as they mature. The flower is edible, too, and makes an appetizing garden snack eaten straight from the plant, or a pretty garnish on green salads.

“Rocket flowers have four petals but otherwise vary considerably between species. Salad rocket blooms with creamy petals that house an intricate network of mauve capillaries just under their surface. Its close cousin the wild rocket is distinguished by its bright yellow heads, each petal about a centimeter long. It’s commonly found growing like a weed on roadsides, where its tiny flashes of color are often sadly unnoticed by drivers cruising past.

“Both varieties are feminine and fragile, but that’s not to say that the rocket is entirely genteel. Cultivated and eaten since Roman times, it was popular then as much for its aphrodisiac properties as pungent taste. Indeed, so well known was it as a sexual stimulant that the flower was allegedly banned in monasteries during the Middle Ages.”

“P.G. Wodehouse once likened a bad haircut to a chrysanthemum’s pompom head, so it seems fitting that in some countries the flower should be associated with honesty – however unpalatable the truth may be. More commonly, in some places, white chrysanthemums are associated with death and grief and are often found at the graveside.

“Head east and the flower assumes a wider significance. In China, where it is a symbol of nobility, it is popularly depicted on porcelain and in traditional ink and wash painting. Chrysanthemums are one of four plants making up the so-called ‘Four Gentlemen’ of Chinese art, alongside the orchid, bamboo and plum blossom. In Japan, the flower inspired the national seal, is depicted on the front of passports and even lends its name to the highest knighthood – the Supreme Order of the Chrysanthemum. Each year the plant is celebrated in a Festival of Happiness.

“When the chrysanthemum isn’t being celebrated or painted, it’s being consumed. It’s sold in Asian markets for inclusion in teas (brewed with the dried flower buds), salads and soups.”

“‘Easy on the eye’ is a compliment we often use glibly, but if there’s one flower that truly deserves such praise it’s the fiery nasturtium. Its petals of bright oranges and deep reds bring welcome warm tones to the flower bed. Its edible credentials are equally impressive. While carrots may help you see in the dark, a bit of nasturtium in your diet could protect eyes from age-related macular degeneration and other common sight conditions. That’s because it contains the highest amount of lutein (the so-called ‘eye vitamin’) found in any edible plant.

“The optical trivia doesn’t stop there: nasturtiums are behind a strange spectacle known colloquially as ‘flashing flowers.’ This was discovered by the teenage daughter of Swedish botanist Carl Linnaeus, who observed that, especially at dusk, the petals seemed to emit tiny darts of light. Initially, experts called it an electrical phenomenon, before realizing it was a reaction in the human eye caused by the contrast between the vivid orange flowers and their surrounding green leaves.

“These leaves, like the flowers, have a strong peppery taste and can be ground with Parmesan and walnuts to make a delicious pesto.”

“The gentiana, also commonly known as gentian, isn’t a flower that lets its diminutive stature stand in the way of getting noticed. Just a couple of inches tall, it turns heads with its piercingly blue petals instead – the Frank Sinatra of the alpine slopes. Ol’ Blue Eyes would have approved; a 1906 advertisement published in the Journal of Botany claimed gentiana was popular with the ladies: ‘The only known flower in existence that exhilarates the heart and mind of the fair sex.’

“If you don’t have time to study it on the ski slopes, you’ll probably get better acquainted during the après-ski – the root of this plant makes a rather delicious distilled alcoholic beverage called gentian. An aromatic but bitter spirit, a sip or two is also thought to help settle digestive problems. Unfortunately for the people who make it, the plants have been placed under protection in Germany and Austria, and they can no longer be picked in the wild. Even grazing animals leave the gentian alone, put off by its taste.”

“‘Flaming flowers that brightly blaze’ was how US singer Don McLean memorably described them in ‘Vincent,’ a track inspired by Van Gogh’s series of sunflower still-life paintings. In London’s National Gallery, postcards of the famous bouquet reportedly outsell all others in the bookshop, and the floor directly in front of the original is more scuffed and worn than any other section in the gallery.

“Tall, with striking yellow heads, sunflowers are unmistakable, almost too highly colored. They certainly succeed in attracting attention: even before they were committed to Van Gogh’s canvas, the sunflower motif was a popular feature of stone and metalwork in the late nineteenth-century Aesthetic Movement. They are head-turning in a very literal sense, too – tilting during the day to face the sun – and subsequently enjoy a long religious association as a symbol of the Christian soul.

“Earlier civilizations had more practical uses for the sunflower. Some archaeologists believe it may have been farmed before corn. It was enjoyed among American Indian tribes, who ground the seed into flour for cakes and bread well before it was bottled in oil form for frying.”

To learn more about the wonderful world of flowers, shop the new book below: 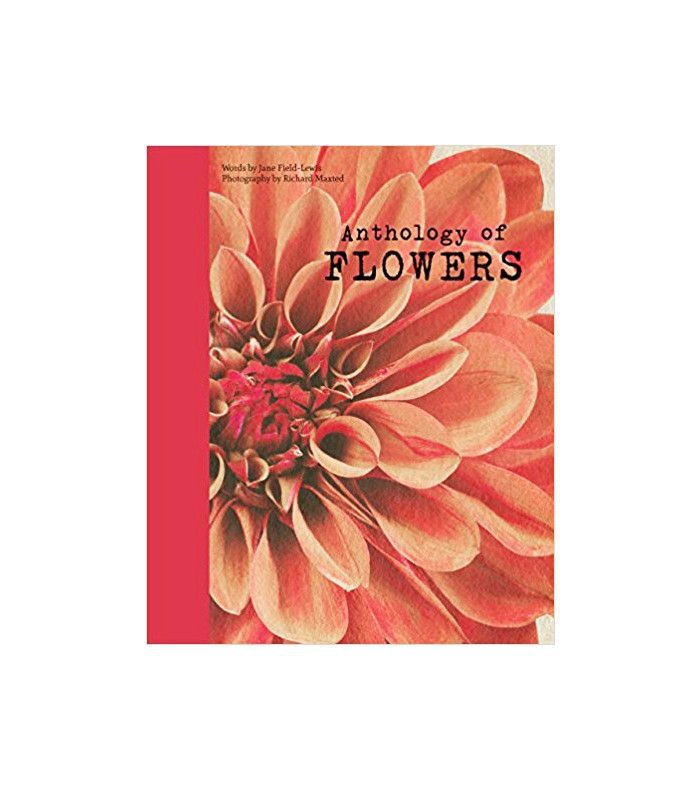