The One Room Interior Designer Emily Henderson Will Never Forget 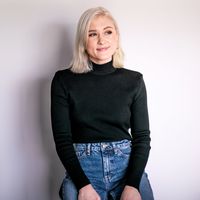 While many people can create a Scandi-inspired home, few people have mastered the ability to effortlessly switch between neutral dreamscapes and maximalist interiors. Emily Henderson is one of the few. Her trademark style is the embodiment of California cool—neutral colors, breezy accents, and stylish pieces of furniture. So when you see the Fig House lounge, it’s understandable why it left a lasting impression on her and is one room she’ll never forget.

Before its transformation, the space was a dark and dimly lit concrete box. Post-makeover, it’s a room soaked in sunlight, and contains a menagerie of bright gumball-colored vintage furniture. There is an energy that flawlessly connects the outdoors and indoors, encouraging movement between the two often-separated spaces. It would be next to impossible to draw a connection between the finished product and the room prior to its transformation. While it seems like Hendserson waved a magic wand over the place, a makeover this striking takes an immense amount of effort.

One of the most appealing things about the space is the diverse shades of jewel-toned fabrics on each piece of furniture. Although an eclectic mix, the shades work well together. It’s a vibrant space that even the most extreme minimalist could appreciate. Another eye-catching touch in a room this maximal, are the stained glass windows—something Henderson was pleased to see pulled off. “Judson Studios (and Ginny Macdonald, my designer at the time) really nailed my vision and those windows truly are breathtaking," she says. "I had never designed something so custom and special and frankly terrifying. So when it turned out well I was so relieved and excited.”

The mustard wingback chairs were also a favorite of hers. The combination of complementary fabrics really made them stand out from your classic seating arrangement. The mirrors were another unforgettable find. Their Art Deco-inspired design only added to the funky vibrance of the space. The mix of colors, shapes, styles, and decades blended together make for a technicolor dream.

I had never designed something so custom and special and frankly terrifying. So when it turned out well I was so relieved and excited.

A tight budget calls for a vibrant imagination and a keen sense of style. While it can feel limiting, Henderson found a few ways around it. “We had no budget so I had to buy almost all vintage furniture and have them reupholstered, which I did in intense jewel tones," she tells MyDomaine. "It is an exciting room to be in and while I haven’t visited it in years, it has so much energy and when I see it pop up online I’m like ‘ooh, that room!'”

While the budget proved to be the main challenge, a few other obstacles popped up as the design process continued along. “I also didn't know how to design a commercial space—there are limitations and way more functional things to consider,” she says. “Like I didn’t know how to design a bathroom stall to commercial code, because well, I’d never even thought about a bathroom stall. So there was a learning curve that cost us time and money.“ And like any creative looking back on a big project, there are a few changes she wishes she could make.

For example, the Ikea chairs in the ballroom area were meant to serve as placeholders, not long-term pieces, and she hopes those would’ve been swapped eventually. She would also adjust the floor situation. “I put two large antique rugs together under the big green sectional and I think ideally it would be one massive rug, but budget-wise there is no way I could have afforded that,” she says. “I suppose layering a third rug over it in the middle would look better.” Despite this, the story behind the rugs made up for her second thoughts. Both were gems found at a Bette Midler Estate sale that had been living in her house for decades—so seeing them shine again in a new space was a reward in itself.

Rarely do you get to use so many bold colors and patterns and weird vintage pieces. It’s actually influencing me now when I’m at a ‘reject the all-white’ stage and wanting to focus more on color this year.

Although this project was completed eight years ago, the creative freedom Henderson was given and the lasting impression the room left on her has propelled her to push past the expected neutrals that are seen in today’s interiors “Rarely do you get to use so many bold colors and patterns and weird vintage pieces. It’s actually influencing me now when I’m at a ‘reject the all-white’ stage and wanting to focus more on color this year."

And while we’ll never say no to a clean, cream-colored space, it’s refreshing to see bold colors used so generously without looking brash. We might just have to pop a jewel-toned chair into our own homes.

The One Room Closet Designer Lisa Adams Will Never Forget