What Is a Fainting Couch? Learn All About Its History and Striking Design 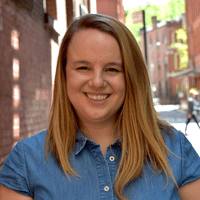 You'll have to look far and wide to find a fainting couch these days, but there's a reason we all recognize the term. It fits so well with the notions of middle or upper-class life in the Victorian era: women were so tightly corseted and so unused to physical activity that they might swoon at any moment. In fact, it fits a little too perfectly with modern views on the Victorians, and that's because the fainting couch is itself a modern creation.

What Is a Fainting Couch?

A fainting couch is a form of a daybed with a raised back and a curvy wooden frame. This piece of furniture was used for relaxing or taking naps throughout the day so as not to mess up a freshly made bed.

The History of the Fainting Couch

Time to debunk history. You may be thinking, how can a fainting couch be modern? Those living in the Victorian Era did have reclining couches, but they didn't call them 'fainting couches,' nor did they invent this kind of furniture. Victorians were all about the past, and the reclining furniture that we would one day call fainting couches were actually drawn from antiquity.

Greeks, Egyptians, and Romans all used long chairs to socialize, eat, and relax on. These ancient predecessors to these long chairs would have been made of a variety of materials, often wood that would then be piled with cushions and blankets. The Victorian equivalent was typically upholstered and, we can guess, much more comfortable.

The Difference Between a Chaise Lounge and a Fainting Couch

So what did Victorians call these long chairs? One option would have been daybed, a word that first entered English in the 16th century. Another option would have been the chaise longue, which is literally French for "long chair." Chaise lounges came into style in France long before the Victorian era but were inspired by the same ancient lounging furniture. These chaise longues fell into several categories, including a duchesse brisée, which separated into two chairs, and a récamier, which had two raised ends. The English word for these long chairs became chaise lounge, swapping the existing English word 'lounge' for longue.

A Victorian chaise lounge, like its French equivalent, could have a number of features like raised ends. In modern parlance, however, 'daybed,' 'chaise lounge,' and 'fainting couch' have come to refer to slightly different pieces of furniture.

"Fainting couches are much like a chaise, except they have a back and one arm for leisurely lying down," interior designer Liz Caan explains. A modern daybed, on the other hand, is meant to fit a twin mattress and convert to a twin bed. This wouldn't have been true historically—a daybed would have been upholstered as well, and used for reclining and relaxing throughout the day. A daybed today, perfect for guests and complete with an actual mattress, is a more modern invention.

How to Decorate With a Fainting Couch

Even if they weren't used for fainting, these high-backed, long chairs certainly do exist. But, do they deserve a spot in your home? Caan admits it's fairly rare.

"I think I sold one custom fainting couch about fifteen years ago, and the client did actually live in a Victorian home," she explains.

Caan clarifies that fainting couches could work somewhere you might put a chaise, like in a bedroom or even in a living room with odd proportions. And don't feel limited if your space isn't otherwise fully Victorian: Caan can also picture a traditional fainting couch in an otherwise contemporary space done in a contemporary way.

"It would be inviting and add some personality to the space," she explains. "It would also invite someone to lay down and stay awhile."

Just one thing to consider: unlike more open chaise lounges, many fainting couches aren't symmetrical, meaning a sitter can only recline in one direction. This is one reason Caan has used more tete-a-tetes, another one of the original chaise longue styles from France. A tete-a-tete allows someone to recline at both ends and is structured so two people sitting would face inward, allowing for conversation. Some tete-a-tetes can also be pulled apart.

While you can find Victorian-era chairs sold as "fainting couches," don't feel limited by these often pricey antiques. You can also find chaise lounges for sale that include the hallmarks of what we imagine a fainting couch to have: a low back and arm. You can get the soft curves and drama of a so-called fainting couch with modern lines and colors. 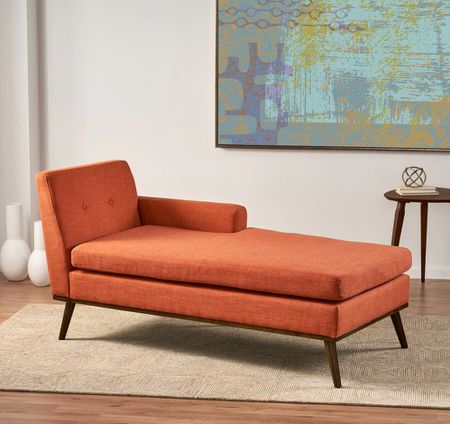 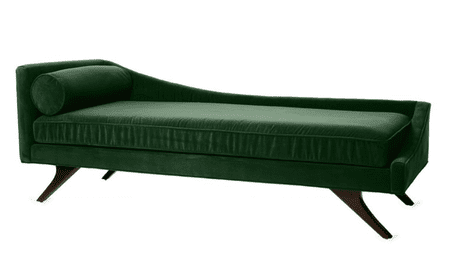