15 Famous Witches to Summon for an Unforgettable Halloween Costume

Witches have long been persecuted throughout history. In the grim, paranoid Middle Ages, many women and children were executed for practicing witchcraft, which was actually just a term for alternative forms of worship and anything that fell outside the pale of dominant (read: super religious) culture of the times.

At some point, however, the witch's reputation as an evil, dangerous outcast shifted to symbolize feminine power. Some trace the shift back to second-wave feminism and then again to the Riot Grrrl era of the '90s. Whenever it started, we're definitely still here for it—like on Halloween, when broomsticks and pointy hats are on display everywhere.

To prove that witches come in all shapes and sizes, don't have to be all good or all bad, are more than looks, and that their sexuality isn't something to fear, we're celebrating our 15 favorite witches from mythology and folklore, retro-television shows, and contemporary media. Some are scary, some stylish, while others are feminist icons. All are famous witches in our book. Get to know these cool witches and then decide who you want to summon on Halloween.

Though it's unclear whether or not Morgan le Fay existed in real life or not, one legend has it that she was a powerful enchantress in King Arthur's court (and his half-sister). The short version is she uses her magic—passed on to her by Merlin, as the story goes—to attempt to defeat Arthur's queen, Guinevere, and ends up helping Arthur get to Lancelot, who's been having an affair with Guinevere. She's an important figure in Arthurian mythology and continues to reemerge in Western literature today as a sorceress, healer, fairy, and dark magician.

Summon Morgan le Fay on Halloween with layers of velvet cloaks, and throw a faux animal hide over your shoulders.

Baga Yaga is another well-known witch in literature and legend. With Slavic origins, she's sometimes referred to as Bony-Legs in modern folktales, as her diet consists of eating the bones of children.

Summon Baba Yaga on Halloween with a headscarf and a rubber chicken toy. (Baba Yaga's infamous house in the woods sits on stilts made of chicken feet.) 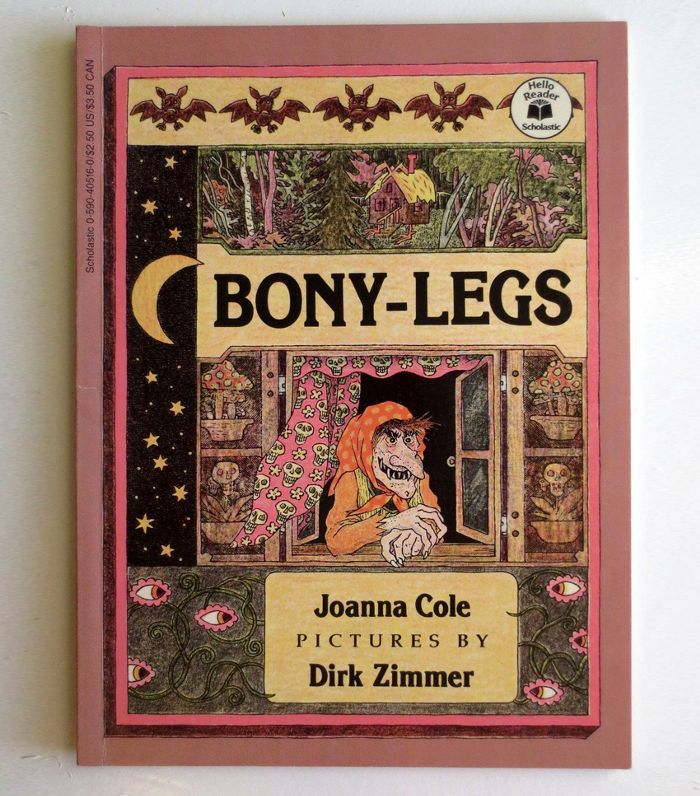 Legend has it Mother Shipton was a healer and prophetess in medieval England. She's also one of the first iterations of the witch archetype as an unattractive older woman with warts (and perhaps where the offensive synonym for witch, "hag," comes from). Born Ursula Sontheil during the late 15th century, she's been linked to predicting tragic events throughout history.

Summon Mother Shipton on Halloween with your usual witchy costume, except without the stereotypical broomstick and hat. Instead, focus on face paint (she's rumored to have had a lot of warts), and wear a simple pleated maxi and a brown shawl.

The Bell Witch is the antagonist in a 19th century Tennessee folktale. As the story goes, an immaterial being with a voice haunted local farmer, John Bell, and his family. Things escalated, and the entire town was tormented and cursed. The events have been covered by mainstream media, and the cave located on the Bell family farm was even listed on the National Register of Historic Places in 2008.

Summon the Bell Witch on Halloween with a simple white nightgown, Puritan style.

Like all witches in the universe of Bewitched, Endora is iconic enough not to need a last name. She's the mother of Samantha, the protagonist in the television series, and spends her days amusing herself (and us) by casting spells and playing tricks on her daughter's mortal husband. We knew we loved her the moment she said, "Okay… So my halo slips now and then, get over it."

The Grand High Witch, The Witches

Author Roald Dahl's children's book is a classic, and the 1990 film adaptation is definitely nightmare-inducing potential with plenty of problematic representations of women, though the film's campiness makes it a fun watch. It's an imaginative tale about a boy whose vacation gets a dramatic twist when he learns there's a witch convention happening at his hotel, and the leader of the witches, the Grand High Witch (Anjelica Huston), is a very terrifying albeit powerful villain indeed.

Summon the Grand High Witch on Halloween with velvet gloves, lots of bling, a black dress, and that iconic haircut. 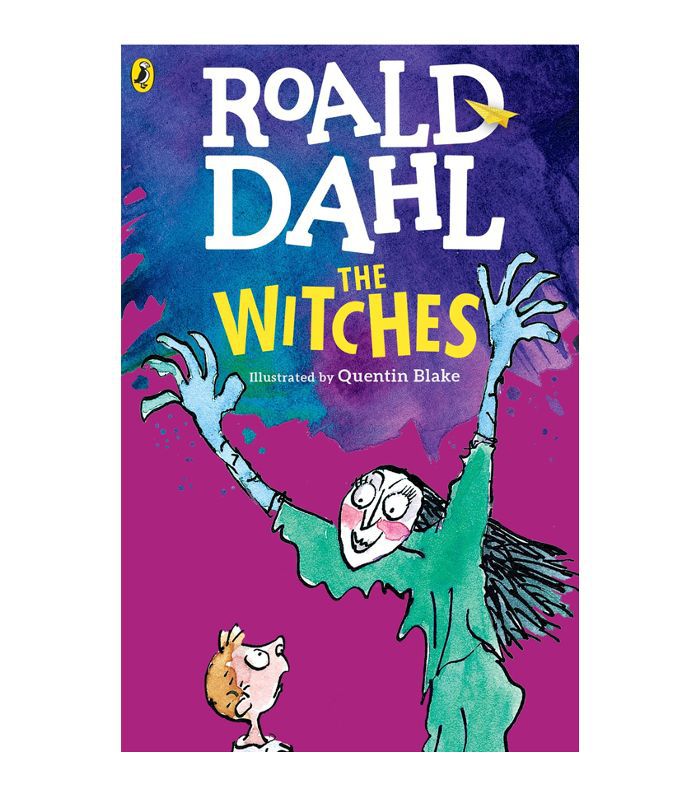 Alexandra, Sukie, and Jane, The Witches of Eastwick

This film adaptation of John Updike's seminal novel, The Witches of Eastwick packs in a lot of our favorite things: Witchcraft, '60s style, and Cher. Seriously, the cast is epic, which includes Susan Sarandon, Michelle Pfeiffer, Cher, and Jack Nicholson joining forces to stir up serious magic. Set in Eastwick, Rhode Island, three women inadvertently create a coven when they each lose their husbands and discover they're witches. It just doesn't get any more iconic than this trio of big-haired women.

Summon the witches of Eastwick on Halloween with teased hair and bohemian caftans or printed silk robes. 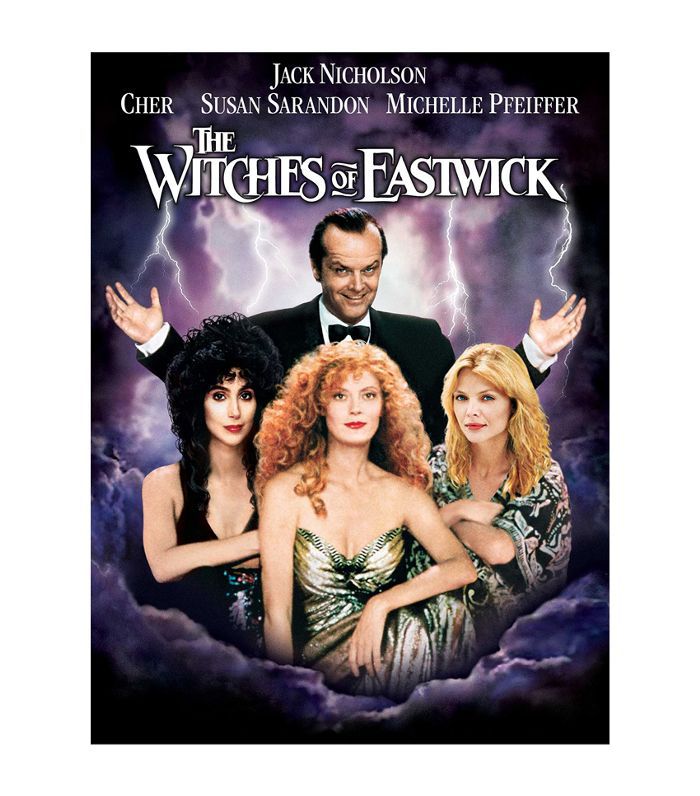 Here's another fun Halloween throwback that always pops into our minds around Halloween. Teen Witch takes place in Salem but takes its dark, tumultuous history and turns it into a light-hearted, kid-friendly, and empowering story sort of like Sabrina the Teenage Witch (which also deserves a shoutout on this list).

Summon Louise Miller on Halloween with a striped tennis shirt, high-waisted shorts, fluffy bangs, a bucket hat, and a broomstick. 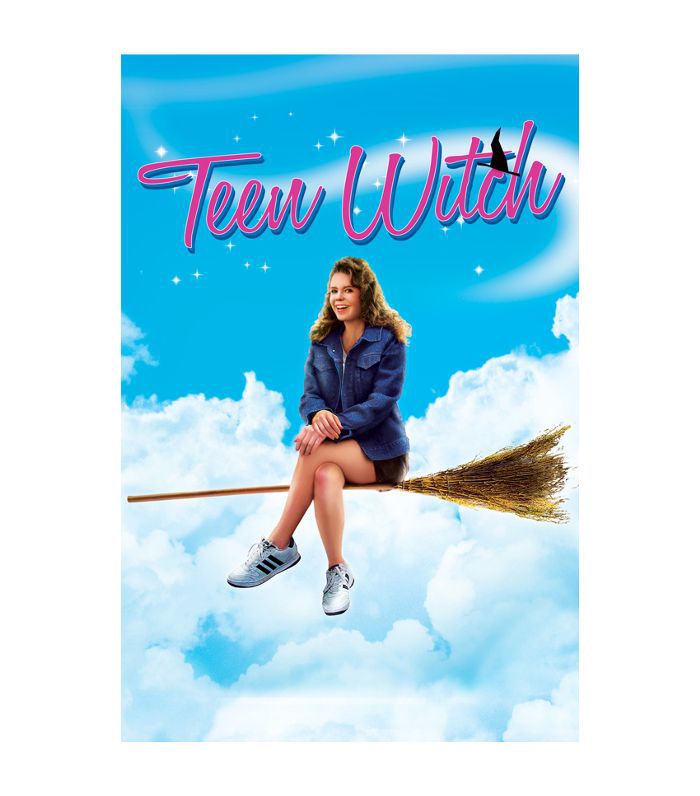 This coming-of-age film is about four misfits who actually hold all the cards (and, in our book, all the coolest clothes) in their high school. Nancy Downs is the unofficial ringleader, who famously said, "We are the weirdos, mister," forever capturing our hearts and encouraging us to be our most authentic selves.

Summon Nancy Downs on Halloween with all things '90s grunge and goth. 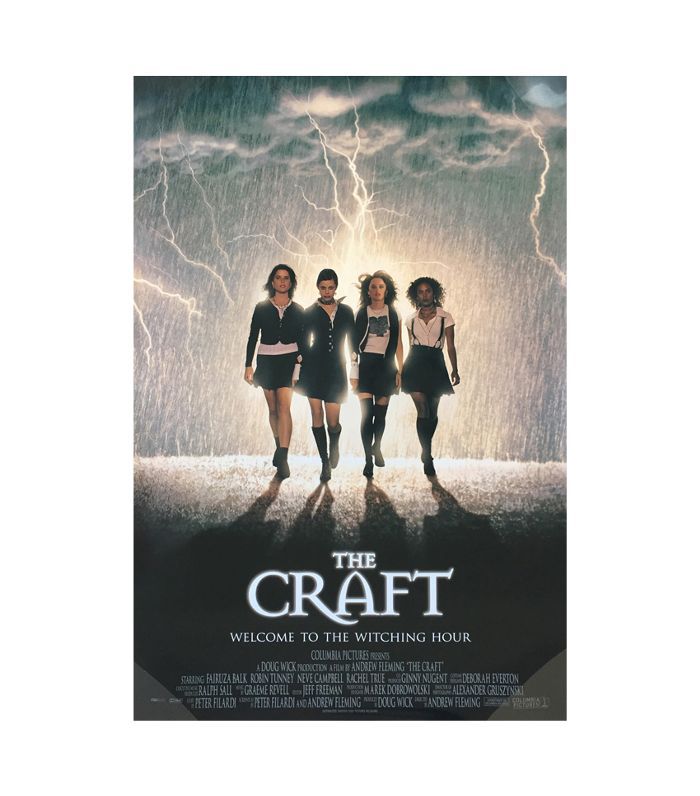 This Disney classic stars Bette Midler as Winnie and Sarah Jessica Parker as the world's most foolishly lovable witch. The movie itself packs in all of our favorite things, from teen romance, drama, and Massachusetts fall vibes. Though the Sanderson sisters still embody that stereotype of witches spiteful of young, beautiful characters, the humor the actresses bring to their roles makes them awesomely campy and undeniably epic. Sarah Jessica Parker singing, "Come, little children, I'll take thee away," still haunts us.

Summon the Sanderson sisters on Halloween with ornate medieval princess gowns with a gothic twist. And just like the Witches of Eastwick, this trio is known for their distinguishing hairdos and makeup. 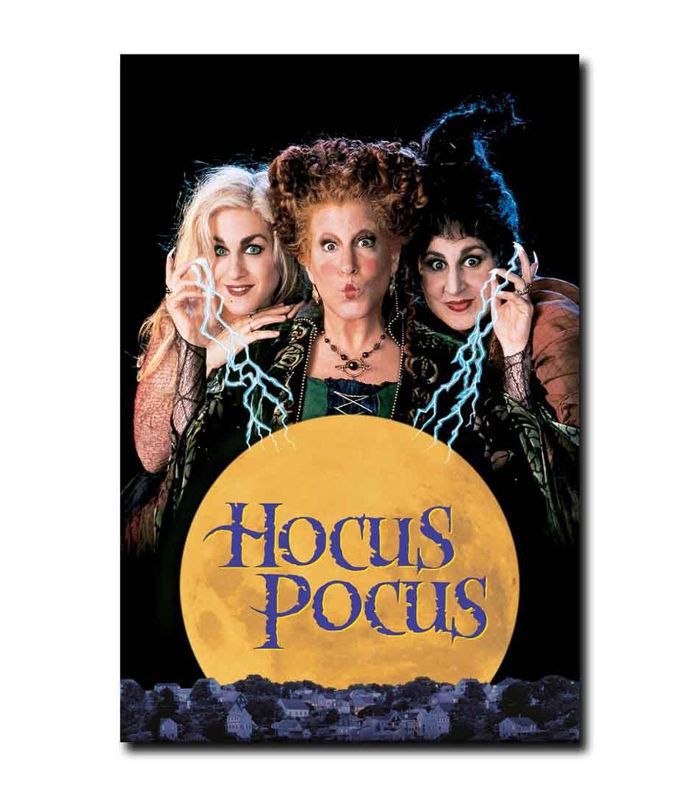 If you're looking for a movie featuring witches that don't revolve around blood-sucking the youth out of children or winning over a man, look no further. Practical Magic is about the relationship between three generations of awesome women, while men in the film play supporting roles. The protagonists are cool, smart sisters portrayed by Sandra Bullock and Nicole Kidman, and the movie's fun-loving tone is refreshing.

Summon Sally and Gillian Owens on Halloween with nostalgic '90s outfits to pair with a pointy black hat. 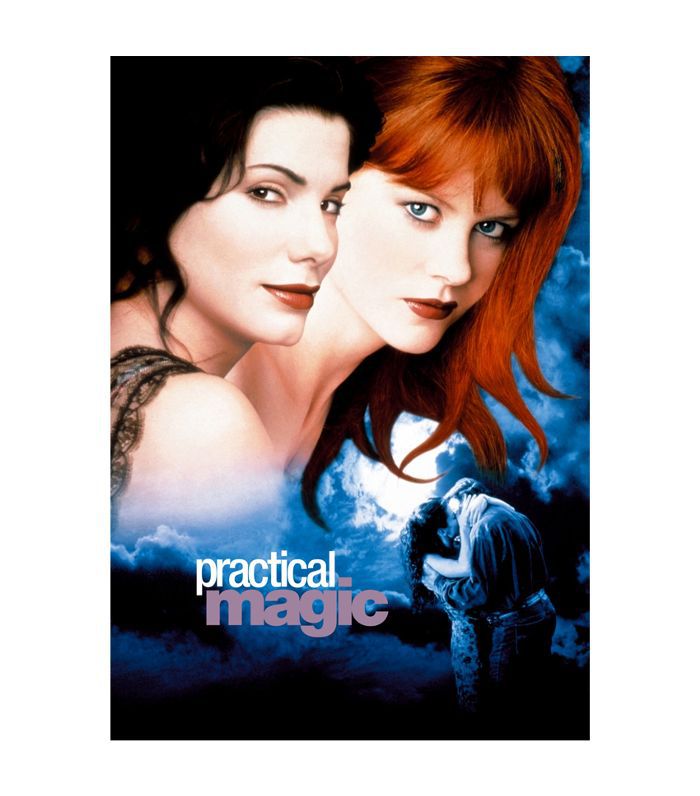 A TV series featuring attractive, bloodthirsty vampires and witches, set in the American south…sign us up. In True Blood, age-old folklore meets the future in Louisiana, and Lafayette Reynolds is easily one of the most lovable, supernatural characters in the lineup. As the charismatic, hilarious, no-BS town medium and sorcerer, it's refreshing to see some LGBTQ+ witches of color on television—as they typically fall within narrow, normative borders. An especially wry, wise, and charming Lafayette Reynolds quote we love, "Let me get this hetero straight. You're a vampire who can come out in the daylight? Ah, now there go the damn neighborhood." 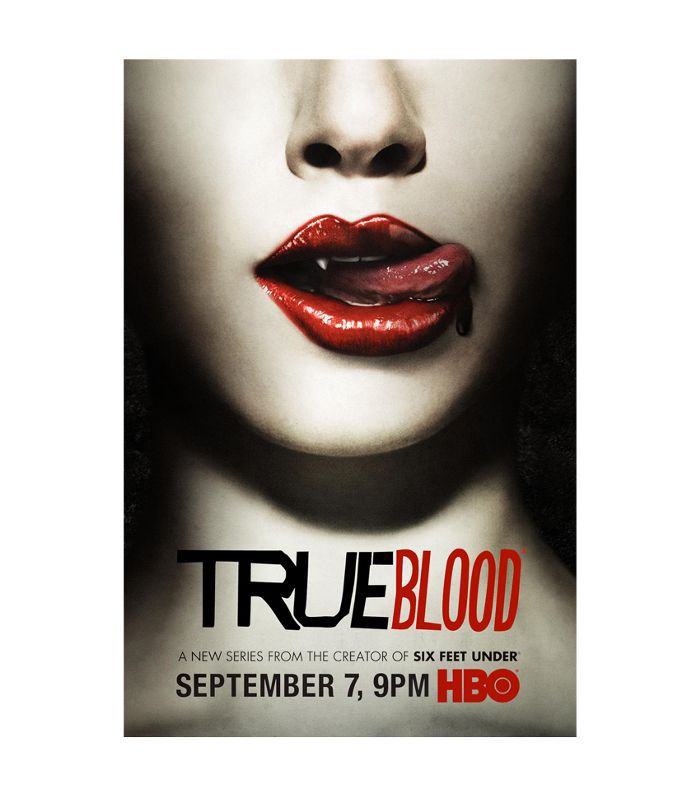 You can always count on American Horror Story for a fascinating period piece that dives deep into the underbelly of American history. And this one weaves New Orleans past and present, where a coven of descendants from Salem are all sent to an academy to learn how to manage their dark powers. The real standout is actress Angela Bassett as Marie Laveau, the real-life Creole woman and voodoo practitioner during the 1800s. Says Bassett's character, "Well, maybe you haven't heard the news about civilization started in Africa. We're more than just pins and dolls and seeing the future in chicken parts. You've been reading too many tourist guides."

Summon Marie Laveau on Halloween with fabulous silk pieces, like dramatic hoop skirts and bright shawls. Include a plastic snake. 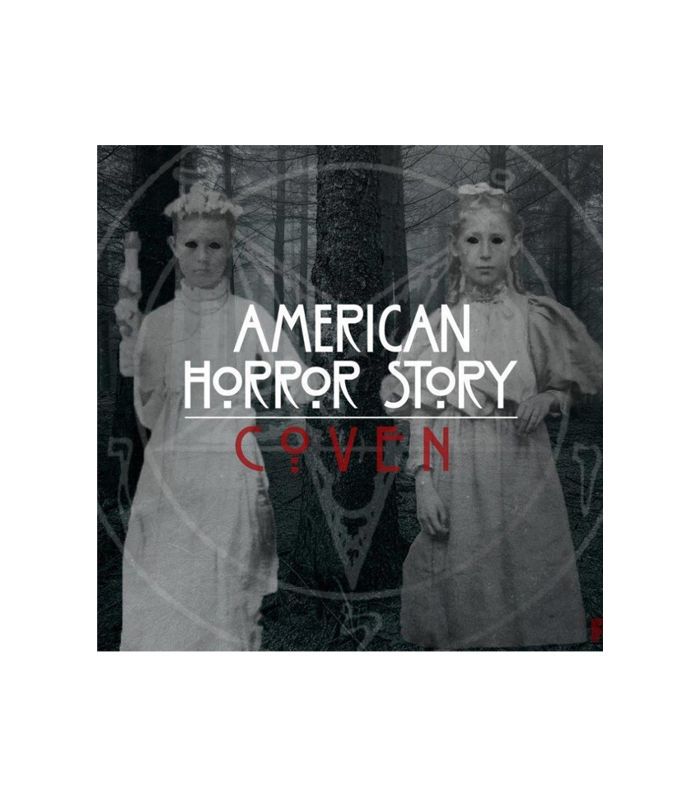 As the title implies, this New England folk tale about a struggling family and ensuing enchantment is much more than witchery. Thomasin is the eldest daughter of the family and likely protagonist. Though not for the faint of heart, The Witch can also be viewed as a period piece about early America, or as a social critique on the policing, fear, and demonization of female bodies. From naked dancing in the woods, spare and bleak atmospheric buildup, immaterial witches, and bloodshed, it's the sense of paranoid witch hunt culture that makes the film most chilling. And for the record, we'd probably say yes too, if the devil asked us, "Wouldst thou like to live deliciously?"

Summon Thomasin on Halloween with a "bloodstained" skirt, apron, and bonnet.

Last but not least, we introduce you to the witches' anthem, "Brujas." In this track, Princess Nokia delves into the history of Wicca, humanizing it as a spiritual practice and historically persecuted community, and destabilizing the stereotype of it as mystical and other. She pays tribute to Tituba, an enslaved woman executed during the Salem Witch Trials, with empowering lyrics like, "If you hex me with hate, then I'ma conjure the light." Aside from an important history lesson, "Brujas" is also a good pump up song to dance to with a visually striking music video to match.

Summon Princess Nokia on Halloween with an ethereal, sheer blue cloth draped over your face, a slip skirt, and gold bangles. There's also a slew of cool yellow outfits later in the music video that are definitely worth checking out for inspiration.

Princess Nokia 1992 Deluxe $12
Shop
The Pros Have Spoken: These Are the Best Small-Bathroom Paint Colors