These Customized IKEA Cabinets Are the Solution to an Outdated Kitchen 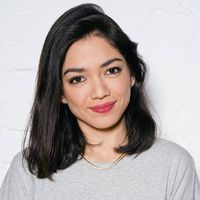 Dacy Knight
Dacy Knight is a writer and editor and the former weekend editor for MyDomaine. Her work can also be found on InStyle.com, Bustle, WWD, and in the journal of Critical Studies in Fashion & Beauty.
MyDomaine's Editorial Guidelines

When the couple behind Cameron St. Visual Storytelling moved into their '70s brick bungalow just over a year ago, they had the intention of renovating it and making it theirs. With three children between the ages of 1 and 5, the kitchen was an especially important part of the home, to begin with. "The client was looking for a French country kitchen with an elegant yet casual feel," describes principle designer Alyssa Terpstra of full-service interior design studio Coco & Jack.

"Sticking with the IKEA interiors and going with Semihandmade for the door fronts really allowed us to customize the look and add in some really great features," explains Terpstra, who sought to create a custom kitchen look for the homeowners. "Compared to an all-custom kitchen, it is a lot more affordable and you are able to get a very similar look." Semihandmade offers custom cabinetry and handmade craftsmanship at a competitive price, using IKEA cabinets as the base for tailored design. "Going with Semihandmade also allowed the homeowner to get custom panels for her two-drawer dishwasher and her built-in fridge, which was really important to her," says Terpstra. It also brought to life the personalized feel of a French country kitchen. Below Terpstra walks us through the kitchen makeover and explains more about the design process.

"The space wasn't very large, but I wanted to be creative with it so that we could make the most of it," explains Terpstra. Because the kitchen wasn't big enough for an island, they went the unconventional route of having the dining table in the center of the kitchen.

"I love the idea of the family hanging out right in the middle of the kitchen," says Terpstra. "This also gave us room to fit in a butler's pantry, which allowed us to almost double the storage and counter space."

"The homeowner purchased the flooring, which was a great starting point for all the other finishes," recounts Terpstra.

"I designed the pantry to hold the sink and dishwasher so it is a great place to hide dirty dishes during a dinner party," notes Terpstra.

As for renovations, they changed some openings and added an interior wall for the walk-in pantry, an extra window, and patio doors.

When deciding on the color scheme, "the homeowner had a really good idea of the look she wanted," explains Terpstra. "She wanted to keep it light and feminine, which is why she went with light finishes and added the gold accents."

Terpstra says the vintage wood pocket door that leads to the pantry was one of her greatest finds for the project.

For Terpstra, the biggest challenge of this project was making a pretty and functional layout with not a ton of space, but in the end, they accomplished exactly that.