How Hannah Brown Keeps Her Home Feeling and Looking Good 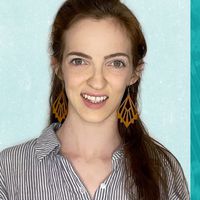 Jenny Hughes has been an Editor at The Spruce and MyDomaine since February 2021. She currently oversees all gardening and home decor content, assigning, publishing, and managing content. Her expertise ranges from home décor and DIY to gardening.

After the chaos of the holidays, Hannah Brown turns her sights on getting organized. “After the holidays are done, I still like to keep my Christmas tree up for a little bit," she tells MyDomaine, "but I really start pretty quickly putting things [away] that are gifts, organizing what needs to be taken out of the home and what needs to find its place.”

Brown became a Bachelor Nation favorite after her turn as The Bachelorette, but since then she’s forged her path by winning Dancing With the Stars, writing a bestselling book, moving in and getting a dog with her boyfriend Adam Woolard, and participating in the new FOX show Special Forces: World’s Toughest Test, which premiered on January 4.

We caught up with Brown to talk about how she resets in her home at the start of the year and manages clutter and organization. (Spoiler: Taylor Swift music is involved.)

“I can be really bad about leaving things behind, so something I have to do every day or every other day is make sure all the surfaces are clean again,” Brown explains. But living in an open-plan apartment means that there’s a lot of visible surfaces. “Adam will make fun of me. He'll be like, ‘can you just sit down?’ And I'm like, ‘no, look at the kitchen, we have to clean it,’” she recounts, imitating herself getting frazzled over the mess. “Like, I can't even pay attention to the TV because I can see that in the corner of my eye.”

Especially when you can see your entire living space from the couch, as Brown can, getting those visible surface spaces cleared can have a big impact on how clean your space feels. “Decluttering is something that you can do every day to keep your home at a place where it looks and feels good," she says.

Make It Organized But Pretty

Pretty yet functional is the name of the game for Brown. “Trying to find ways to organize the things that I need to see but in a way that's aesthetically pleasing is really important to me,” Brown says. Which also means that any time she organizes, it takes a lot of time: “You have to make sure you find all the pretty boxes and organizing containers—it's a whole process.”

Professional organizers helped her get her two closets to a pretty-yet-functional place. All her daily wear—sweaters, cardigans, t-shirts, jeans, athleisure—is in one closet, and everything else is in the second closet, along with Woolard's things. The purses and jeans are now displayed in her closet like they would be in a store. “Taking all my jeans out like that made it actually look really pretty when the doors are open,” she explains.

A trio of pretty rattan baskets hold various supplies in the multipurpose room, which serves as a guest room, office, and workout space. The mood board on the wall in that room is both a beautiful focal point and an inspiration, reminding her of what she wants to manifest in the new year. “It's done in a way that I feel still adds to the home, but it's also good for myself,” she explains.

Letting Go While in the 'In-Between'

The square footage she has now isn't the square footage she plans to always live in: “I would say this isn't a forever home space, but this is a great kind of in-between,” she says of her current Los Angeles apartment. “I can definitely be someone that's always thinking about the next.”

You really do have to let go of things that don't serve you or serve your space.

But that mentality has led to challenges when it comes to deciding what to keep and what to let go of. “I saw this antique bowl that I'm like, I need this, this will look so good in my future home. But is it really something that I can store right now? Probably not,” she explains. “You really do have to let go of things that don't serve you or serve your space."

Big Declutters: ‘You’ve Got to Make It Fun’

Besides a clean-out around the first and last few days of each year, Brown does big declutterings roughly four times a year. "When you have too much in your space, it can feel suffocating," she reasons.

For a daily morning declutter, she likes instrumental music to help her focus, but “when I'm doing the full quarterly declutter, that is totally going to be Taylor Swift on a repeat,” she smiles. “You’ve got to make it fun."

“I'm normally trying on things in my closet at the same time," she explains, "so I’ll have a crazy wacky outfit on, going through a drawer in the office that has like 12 different colors of sticky-notes in it — while I'm wearing a wig and a tube top and a long dressy skirt."

"Truly, I feel like that's actually been something that has happened," Brown smiles.

Decluttering With a Partner

“I think we live in a society that's ‘more is more,’ and when you live in a smaller space with another partner, more is not more for the way you can live your life in the best way," says Brown, who also copes with the possessions of another roommate—a dog named Wally.

When asked how she navigates decluttering when you live with a partner who has their own preferences for their possessions, she laughs. “Yeah, I mean, I just do it,” she admits with a smile. “I think he appreciates it, too. And he is also a really great help.” The pair sets aside time to put things like laundry away together.

But Brown is quick to say she’s far from perfect. “When I come in, I'll make a disaster,” she emphasizes. But she doesn’t let it stay that way. “It's like another switch changes, like ‘everything has to be clean!’”

And she does see the irony in the situation. “It’s like, ‘You're the one who comes in and makes it a tornado, and then when you're ready for it to be clean, we all have to be ready,’” Brown says, recounting Woolard’s perspective. “And I'm like, ‘yes,’” she nods.

“I am very thankful to have somebody that also cares about the way the apartment looks and is definitely helpful in cleaning and organizing,” she reflects. “I think I'm a little bit lucky in that he's an exceptionally clean man.”

Featured photos courtesy of Hannah Brown / Photo Illustration by Amy Sheehan for MyDomaine. Interview has been condensed and edited for clarity.