This New Tech Product Completely Changed the Way I Sleep

Caroline is the Associate Editorial Director at MyDomaine and has been with the brand since 2019. She previously covered home trends and décor for Good Housekeeping, Woman's Day, and Redbook. She holds a B.A. in journalism and leadership studies from the University of Richmond and also completed the Columbia Publishing Course.

The writer purchased the Hatch Restore, so she could put it to the test in her own home. Keep reading for our full product review.

You know that feeling when your alarm first goes off in the morning? After the first series of shrill beeps, you're jolted awake, already feeling anxious about what's to come? And any rest you may have gotten dissipates as you start running over your to-do list in your head?

I haven't had that feeling in weeks since I started using the new Hatch Restore, a smart light, sound machine, and sunrise alarm all in one. 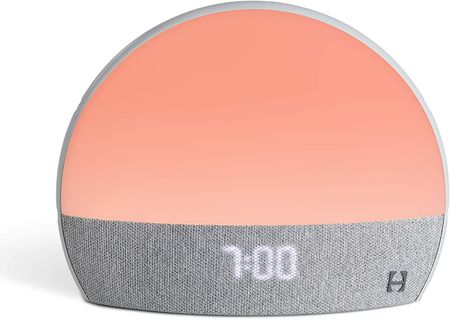 Here's how it works: the entire product is controlled by a smartphone app, and nearly everything is customizable. The goal is to come up with a sleep routine that works for you. You're able to personalize the color of the light, the meditation or soundscape you'd like to wind down to (it can be as short as two minutes or as long as 45), the color, brightness, and duration of the sunrise you wake up to, and the sounds you'll hear as you awake.

My current favorite routine includes time for reading, followed by a wind-down period where the light dims and Icelandic ocean sounds play for about 30 minutes. Yes, it's as heavenly as it sounds. Then the light fades to black as white noise plays, and I eventually wake up to a 30-minute gradual sunrise (I chose the pinky-yellow "Malibu Sunrise" option) while melodic wind chimes play promptly at 7:30 AM. It's the equivalent of being woken up from savasana after a really delightful yoga class: calming and zen.

It's the equivalent of being woken up from savasana after a really delightful yoga class: calming and zen.

I would consider myself a moderate sleeper; sometimes I have no trouble falling asleep at all while other times, I'm tossing and turning all night long. While I still have the occasional rough night, overall my sleep routine has been totally revamped for the better. When the wind-down portion of my routine begins, I use that as a cue to put down my phone (and its sleep-disturbing bright blue light) and try to relax alongside the sounds of the beach. On days when I know I'm more anxious, I'll swap in a meditation instead of the beach sounds, which gives me something to focus on besides my worries as I drift off to sleep.

But the best feature by far has to be the morning sunrise. My apartment has very little natural light, so it tends to feel like a cave, making it extra hard to get out of bed in the morning. Now, every morning, my tiny abode slowly fills up with light, gently easing me into the day unlike the alarm tones on my phone.

Now, every morning, my tiny abode slowly fills up with light, gently easing me into the day unlike the alarm tones on my phone.

While the Hatch Restore isn't necessarily cheap, if you're a rough sleeper, it may be worth a buy. But be sure to factor in other costs before you take the plunge. Though many of the meditations and sounds are always free on the app, to access the full library, you'll have to become a subscriber. New users receive six months of free access to Hatch Premium, an ever-growing library of soundscapes, meditations and sleep sounds. After six months free, there's an auto-renewing yearly subscription at $49.99 per year. While you definitely don't have to subscribe to reap the benefits of a Hatch Restore, to get the full experience, you may want to consider it.

All in all, if you're looking to invest in your sleep routine, the Hatch Restore is definitely worth the buy, especially if you're looking for a product that's a little more targeted than a weighted blanket or a relaxing pillow spray. Though now I'm wondering if I'll ever be able to fall (and stay) asleep without it.