We realize that Halloween candy and the word "healthy" don't exactly go hand in hand. And since we also know firsthand just how powerful the yen for candy can be this time of year, we wanted to figure out which popular candies wouldn't be that bad if you caved to your cravings and had a few—in moderation.

Via an informal (very pseudoscientific, if you will) study of the nutrition labels appearing on bags of treats in Target's Halloween aisle (and a little help from the Innit app), we compared popular Halloween candies according to their sugar, fat, and calorie contents.

Here's what Halloween candy we're indulging in without packing on major pounds—or guilt. 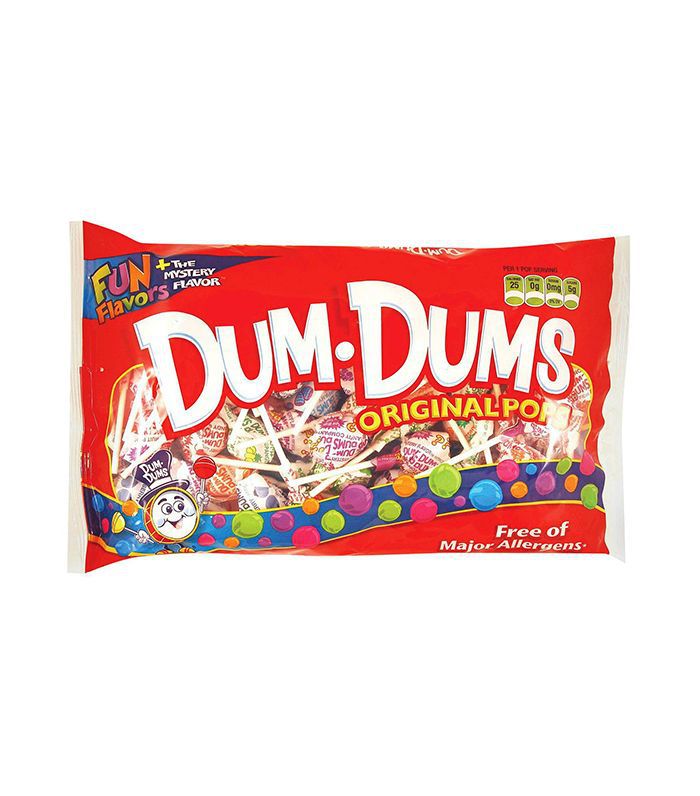 Lollipops have emerged as the clear front-runners when it comes to healthier Halloween candy options. Lollipops (and other hard candies) take a longer time to consume than other treats because you can't really gobble them down by the handful. Plus, hard candy is generally lower in calories than other types.

Dum-Dums (invented back in 1924) are the lollipop of choice at doctor's offices probably because one of these lollies contains just 25 calories and 5 grams of sugar—and its 16 flavors like cream soda, pineapple, and root beer have always been delicious. 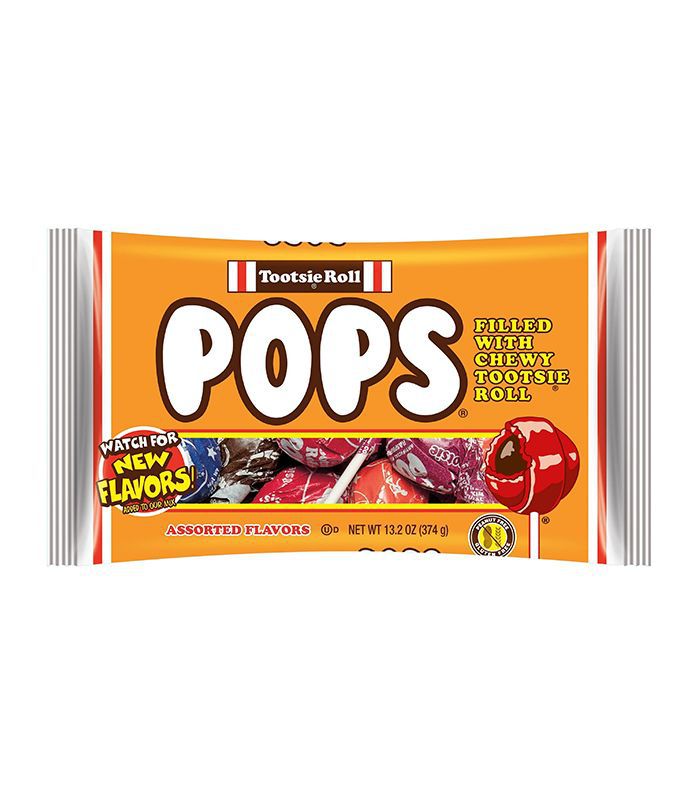 How many licks does it take to get to the Tootsie Roll center of a Tootsie Pop? Apparently, an average of 364 licks. These lollipops come in at a decent 60 calories each and contain a chewy, cocoa-cream Tootsie Roll inside. 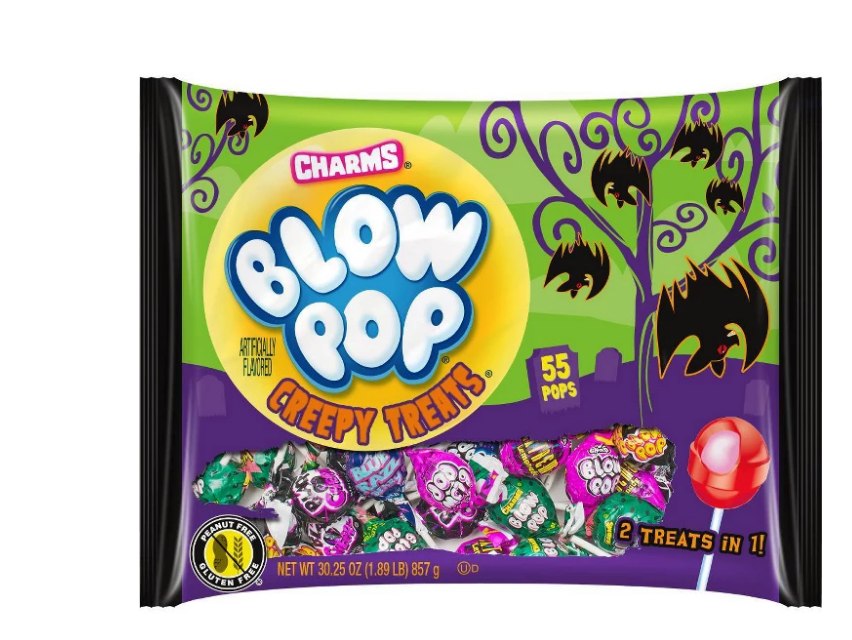 Who doesn't love its juicy, candy shell, and lip-smacking chewing-gum center? These pops will take you at least 5-to-10 minutes to finish (you won't immediately grab another) and contain 60 calories and 11 grams of sugar. Tangy, inventive flavors include Blue Razz Berry, Black Cherry, What A Melon, and Extreme Lemonade. 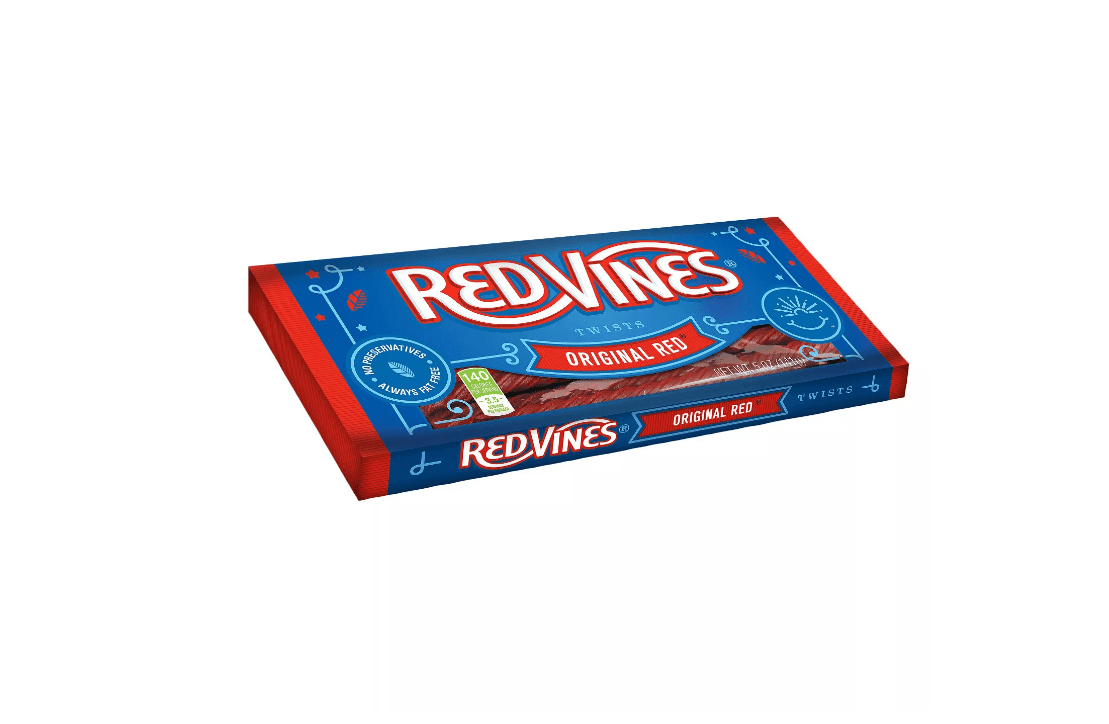 If you're aiming for lower calorie intake—and you love binging on strawberry licorice—opt for Red Vines instead of Twizzlers: Vines contain half as many calories and fewer preservatives, although neither actually contains any licorice extract. A single serving of Red Vines is four twists (140 calories; 6 grams of sugar; 1 gram of protein), so if you can eat just one, that's 35 calories. (And rock-solid self-control.) 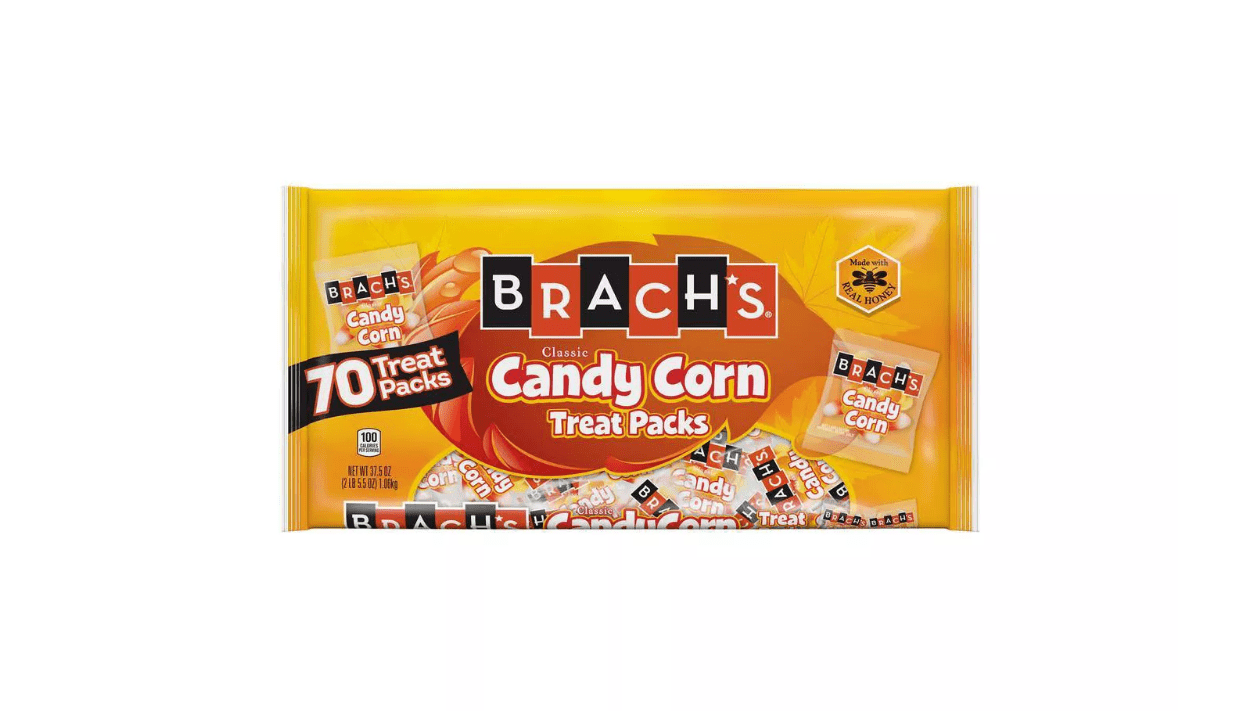 Grabbing a handful of classic candy corn straight from the bag can be dangerous—there are 27 grams of sugar in one serving (21 pieces), which quickly adds up if you're not keeping track. (Sugar's recommended daily intake is 25 grams for women.)

Two of these handy, sealed Treat Packs equal one 100-calorie serving so you can still enjoy this quintessential Halloween treat without worrying too much. (Note: If you'd rather eat right from the bag, Brach's makes healthier Natural Sources Candy Corn, which is made with natural colors and flavors.) 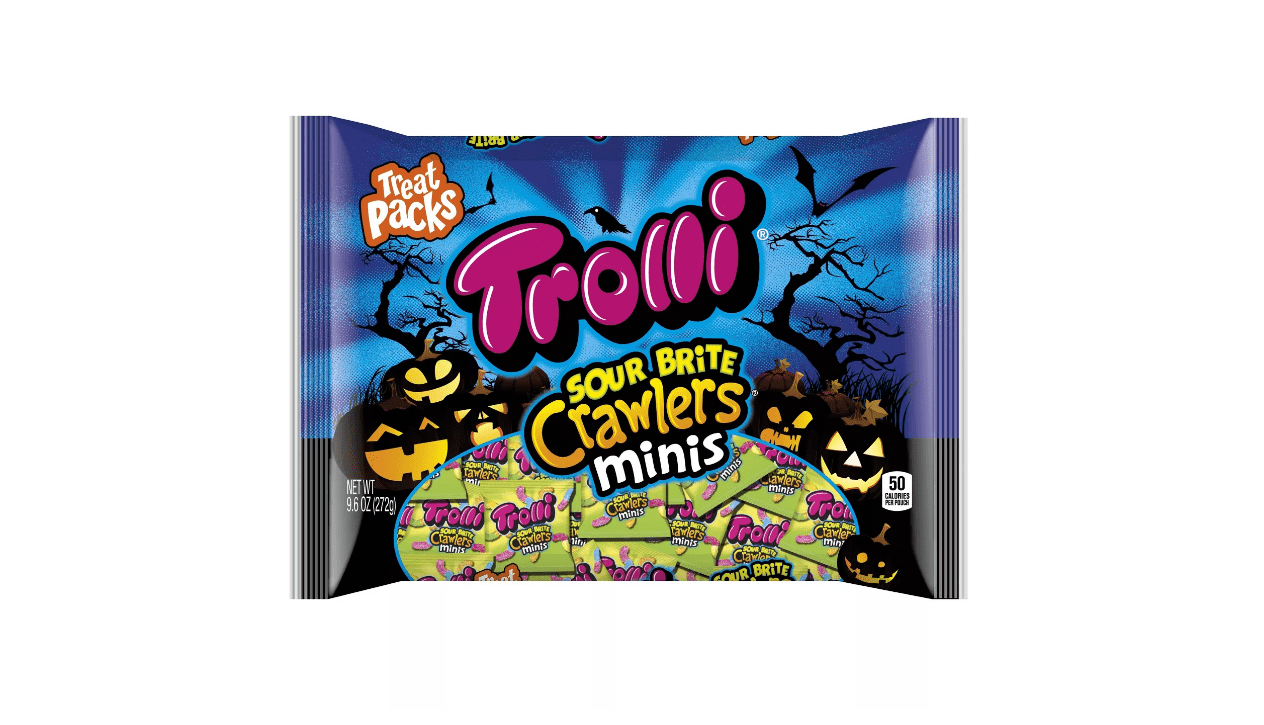 Eat eight full-sized gummies from the bag and it'll cost you 100 calories plus 14 grams of sugar. These individual packs contain smaller worms—at 50 calories per pouch, with 8 grams of sugar and 1 gram of protein—in tangy flavor combos like orange-lime, cherry-lemon, and strawberry-grape. Plus, Sour Patch Kids have nothing on these gummies: Crawlers start out sour and stay sour until the end. 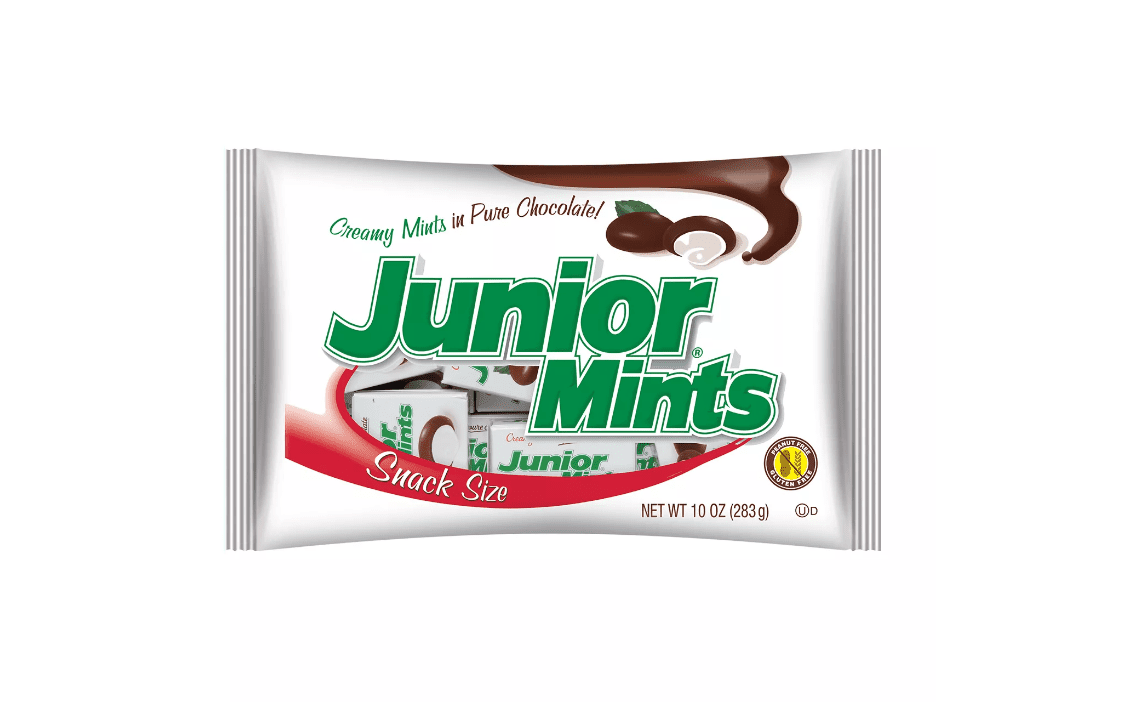 Although you'd consume 600 calories if you scarfed down a jumbo box of Junior Mints at the movie theater, you'll still consume 150 calories, 30 grams of sugar, and 2 grams of fat per two-box Halloween serving (plus 1 gram of beneficial iron), so best to go easy. There aren't that many in each box. 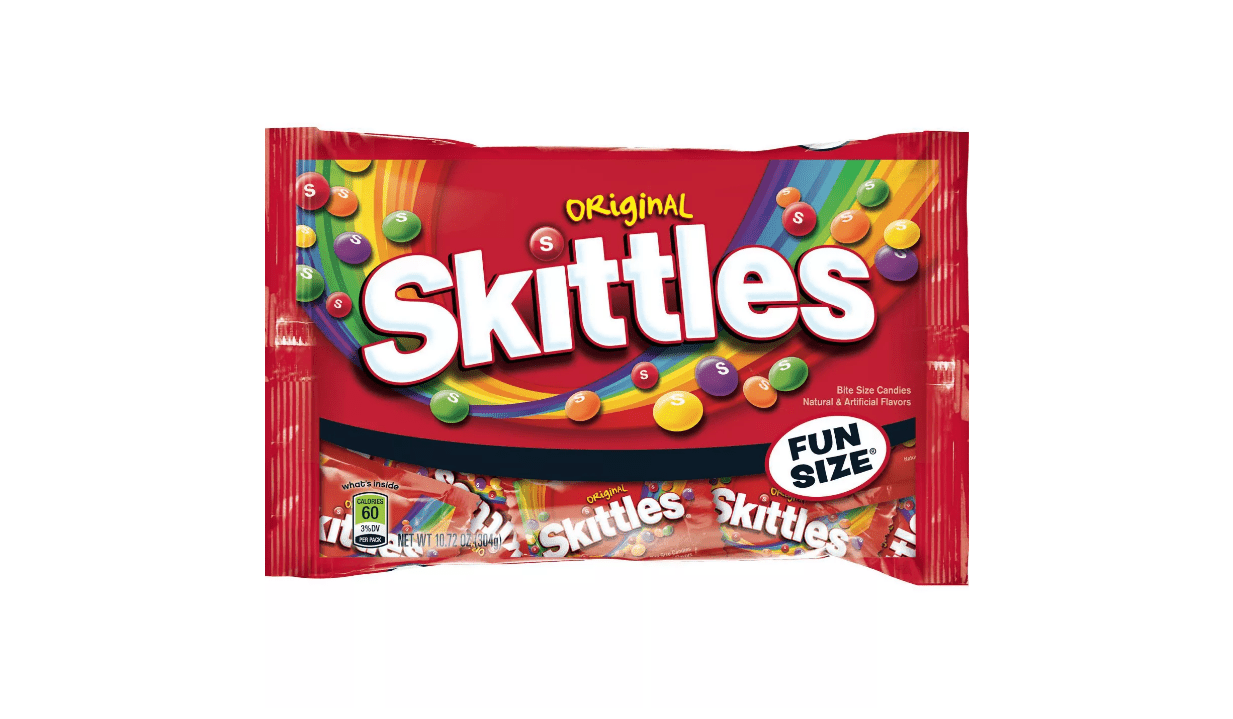 Yes, Skittles are low in fat. And yes, they're America's second-favorite chewy candy. These small, individually-wrapped packs might prevent you from going whole-hog on the bag, but we can't make that promise. You can feel decently okay mowing down three small bags (or one serving) of these because you're only consuming 180 calories. Hopefully, your 34-gram sugar high will prevent you from eating more. 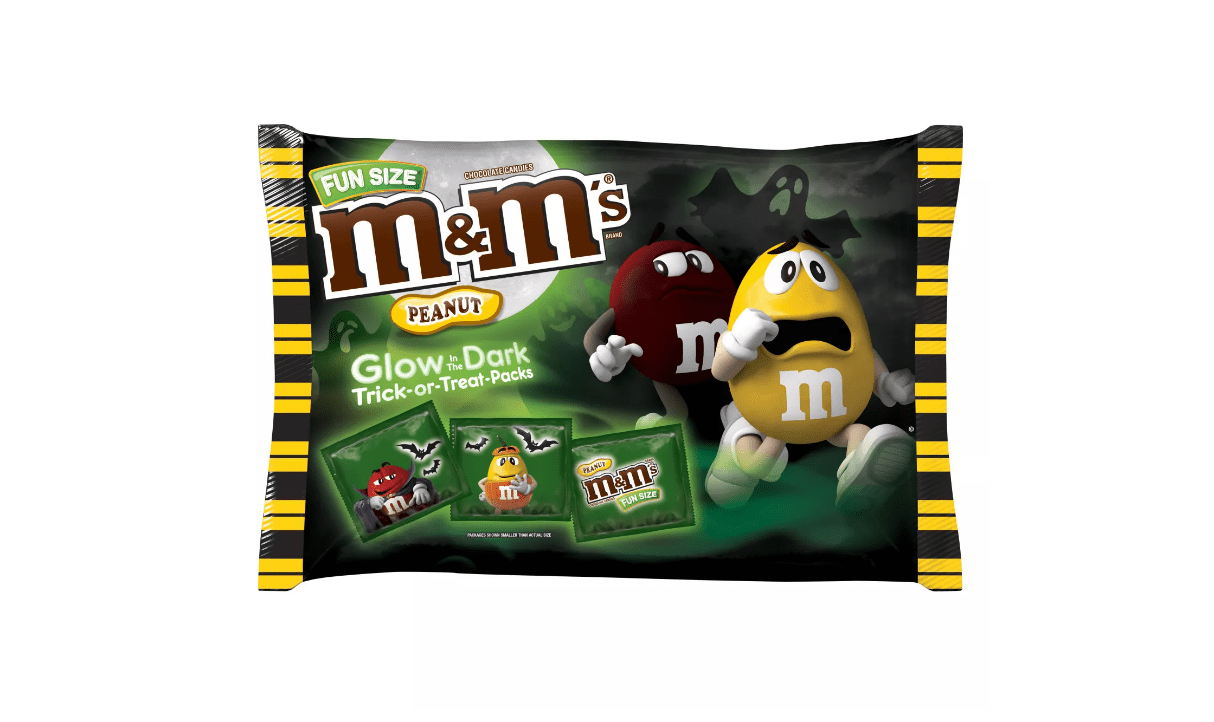 Astonishingly enough, Men's Journal celebrates peanut M&Ms' health benefits, lauding their protein and fiber content (2 grams and 1 gram, respectively), and maintaining they'll, "help keep you full and prevent you from reaching for more candy later in the night. They’re also lower on the glycemic index, meaning they won’t cause your blood sugar to soar like most other candy." 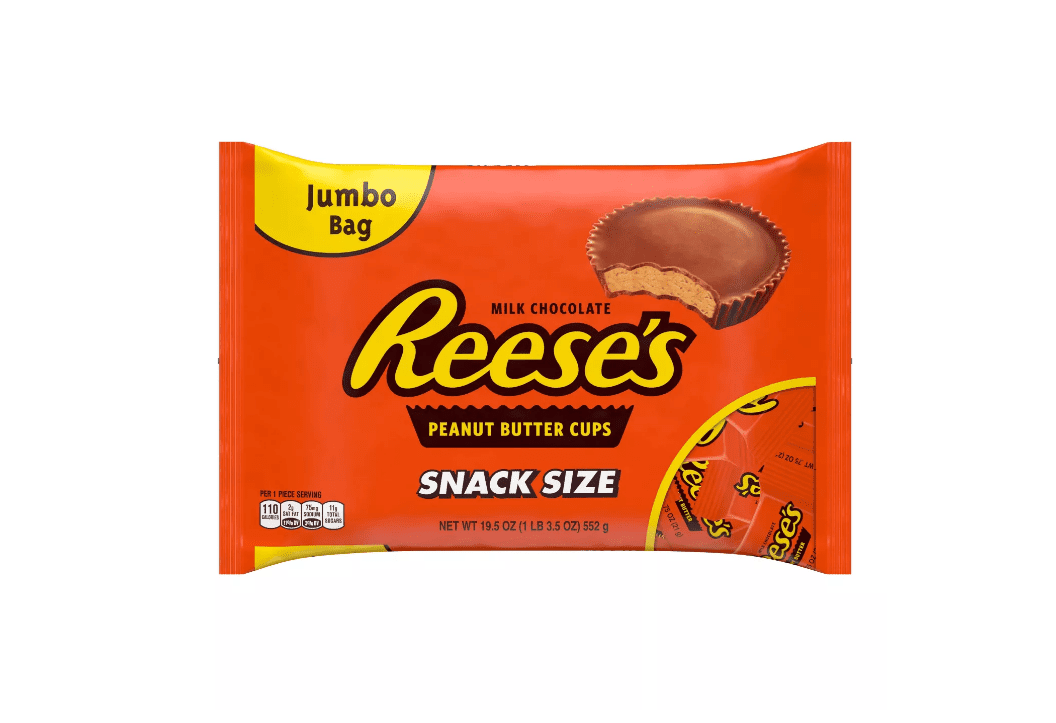 We've saved the most decadent candy on our list for last: One Reese's Peanut Butter Cup tips the scales at 110 calories, 2.2 grams of saturated fat, and 11 grams of sugar. Sure, you can argue that the bad stuff in these rich, salty treats is offset by 2 grams of protein and 1 gram of fiber—but who are we kidding? That said, they're still neck-and-neck with M&Ms as America's most popular Halloween candy of 2019.