How to Grow Aloe Vera

You've probably experienced the soothing properties of aloe vera (Aloe barbadensis Miller) on minor scrapes and sunburns thanks to its skin-healing properties. But, in addition to the benefits of its sap, this spiny, rosette-shaped species, part of the Aloe genus, makes for an attractive houseplant.

Aloe vera is a great addition to your home for low-maintenance greenery and a chic desert aesthetic, though keep in mind that it can be toxic to people and pets if consumed. Originally from the Arabian Peninsula, this succulent doesn't need to live in its native habitat to thrive. While succulents as a whole are generally slow-growing, aloe is one of the faster-growing succulents. With a little care and even the slightest green thumb, you can grow a healthy aloe vera plant right inside your home.

For a natural, at-home sunburn remedy, cut a piece from the leaves of your aloe plant. Split the trimming in half vertically, scrape out the fresh sap, and rub it directly on affected areas.

Since they're well-suited to arid conditions, aloe vera plants can live long and thrive with very little care. Water deeply but only when the soil has completely dried out—about every two to three weeks—and cut back on watering during the winter months. Since too much water can cause root rot, it's important not to let your aloe plant sit in standing water. A pot made from terra-cotta or another porous material will aid in drainage to keep your plant healthy.

Many varieties of mature, healthy aloe vera plants will send up a tall spike each winter with a series of tube- or trumpet-shaped flowers in hues of orange, red, or yellow. Once the flowers fade, cut back the spike at its base with clean, sharp gardening shears.

In general, aloe doesn’t mind being a bit cozy in its pot, but if roots are beginning to grow out of the drainage hole, it’s time to transplant into a slightly larger container.

Like other succulents, aloe prefers conditions that emulate the hot, dry, sunny desert. Plant yours in a container that's a few inches larger than the base of your aloe, and make sure it has good drainage—at least one large hole in the bottom of the pot is necessary to prevent standing water that can damage its roots.

Plant your aloe in soil specifically formulated for cacti or succulents. Find cactus soil at most nurseries or local hardware stores, or make your own with a mix of perlite, rocks (like lava rock), and chunks of tree bark. Layer rocks at the bottom of the pot to collect excess water and keep roots above in the healthy soil mix.

When it comes to watering needs, if you notice your aloe has yellowing leaves, browning leaf tips, or roots with a brittle texture, you're likely underwatering. Conversely, if the leaves have water-soaked spots that are soggy and soft, you're overwatering.

Choose a location for your aloe near a southern- or southwest-facing window that gets plenty of bright, indirect light. The temperature in the space shouldn't drop below 50 degrees. To keep your aloe looking green and well-proportioned, avoid exposing it to too much direct sunlight, which can cause leaves to brown. Rotate your plant periodically, and move it to a shadier location if you notice signs of burning on the leaves.

If you choose to move your plant outside in the summer (when nighttime temperatures are above 70 degrees), start with a week in partial shade before moving it to direct sun to let the aloe adjust gradually.

If your plant is happy, it'll regularly produce small plants that grow out from the roots of the larger plant. These babies, or "pups," can be left to grow alongside the mother plant—just watch for signs that the pot is getting too crowded, like a tired-looking mother plant surrounded by several pups.

There are many varieties similar to aloe vera in the Aloe genus. Suited for both indoor and outdoor planting, you'll find species like aloe 'Crosby's Prolific', a cross between Aloe perfoliata and Aloe humilis. In indirect light, this cultivar boasts the classic bright-green color of aloe vera with white spots. If grown outdoors, the leaves will turn red in direct sun.

Arabian aloe (Aloe rubroviolacea) is a great choice for those who want their aloe plant to grow lush and large. With pale green leaves and a reddish shade on its outer spikes, this plant produces red flowers during the winter. Red hot poker aloe (Aloe aculeata), on the other hand, blooms with yellow flowers in the fall and has red tips on its green spikes.

If you're drawn to the red versions of this plant, the classic red aloe (Aloe cameronii) may suit your style. While you might find some bright green notes clustered at the center of its central rosette, this plant traditionally is coated in a dark, rich red color that complements desert-inspired décor.

How to Propagate Aloe Vera

Propagating aloe vera requires just three steps. Offshoots from the plant called pups can be removed and potted as new plants, while the mother can be repotted with fresh soil in a container one size larger. Here’s how:

Step 1: Choose the right time to remove the aloe pup. It's exciting to see a new green shoot coming up from the soil in your pot, but don't be too hasty to remove it. Wait until pups have several leaves, or until they're about 20 percent of the size of the parent plant, before removing them.

Step 2: Remove soil around the plant's base to see where the roots meet. Using a clean, sharp blade, cut the pup away from the mother plant. Separate the plants by cutting roots apart in a place that leaves a complete root system attached to the pup.

Step 3: Plant the pup in a pot full of fresh succulent or cactus soil. Wait one week before watering. Choose a place with moderate to bright light, low humidity, and cool temperatures. Repeat watering when the soil feels completely dry. Soon enough, your new aloe plant will grow to mature size and produce pups of its own.

How to Propagate Succulents and Grow Your Indoor Garden

Aloe plants are easygoing like most succulents, but they're still prone to some common pitfalls. Overwatering and insufficient light are the two major issues to steer clear of.

Aloe leaves turning brown or yellow usually point to one thing—too much water, which causes root rot. Make sure your plant is in a very well-draining pot and let it almost completely dry out in between waterings.

Again, aloe leaves that are going soft and losing structure are likely caused by root rot from overwatering. Remember that aloe is a drought-tolerant desert plant and basically thrives on neglect.

If your aloe vera plant is inexplicably turning gray, it's experiencing a state of shock, usually due to a drastic environmental change. When transitioning your plant from indoor to outdoor, you'll need to harden it off by exposing it to more sunlight slowly. On the other hand, if you're bringing your plant indoors, you may need to provide additional light.

Aloe doesn't need to be repotted often; in fact, it can thrive in a slightly overcrowded container. But every few years, you may notice roots growing out of your pot's drainage holes, which means it's time to repot. You'll want to use a container one size larger to keep it from becoming rootbound filled with fresh cactus or succulent soil. 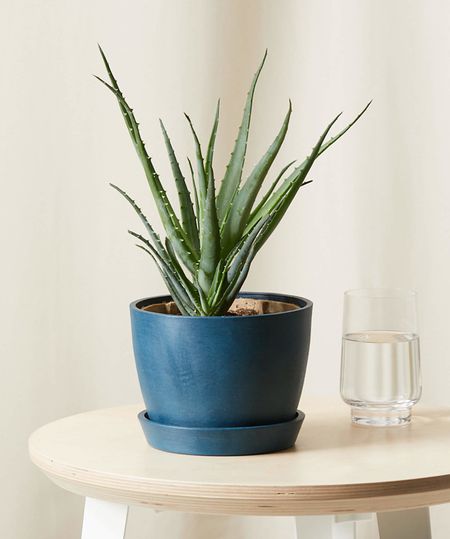 How to Get Aloe Vera to Bloom

Mature aloe plants (about four years old or so) will occasionally send out single stalk flowers with a spiky cluster of tube-like blooms most often in orange, red, or yellow, depending on the variety. It can be difficult to get indoor aloe plants to bloom, though, so you may need to temper expectations.

If you are determined to see your plant send out these impressive blooms, there are a few ways to encourage it. First of all, make sure it's receiving plenty of bright light from an unobstructed, south-facing window. You'll also need to keep the air around it at a minimum of 70 degrees during the day and 60 degrees at night. Lastly, feed your aloe a balanced, diluted fertilizer about once a month in spring and summer months.

Is aloe vera easy to care for?

Yes! Aloe is a very low-maintenance plant to add to your collection and is ideal for beginners, too. Just be sure to give it enough bright light and err on the side of less is more when it comes to watering.

How fast does aloe vera grow?

This will depend on environmental conditions, but typically a healthy aloe plant will produce about one new leaf per month over the spring and summer. A healthy aloe pup should reach a mature size of 8 to 10 inches in about four years. This may sound slow, but aloe is actually one of the fastest-growing succulents out there.

How long can aloe live?

With proper care, indoor aloe plants can live up to 12 years, give or take. Larger, outdoor varieties have been known to live well over two decades.

16 Indoor Plants That Thrive In Direct Sunlight
Article Sources
MyDomaine uses only high-quality, trusted sources, including peer-reviewed studies, to support the facts within our articles. Read our editorial guidelines to learn more about how we keep our content accurate, reliable and trustworthy.