How to Care for (and Propagate) Your Aloe Plant

Most people know aloe vera for the skin-healing properties of its sap. But several of the genus of spiny, rosette-shaped plants it belongs to make for attractive, easy-care houseplants that are an easy way to add some low-maintenance greenery and a Southwestern-inspired look to your space.

Like other succulents, aloes prefer conditions that emulate the hot, dry, sunny desert. Plant yours in a container that’s a few inches larger than the base of your aloe, and make sure it has good drainage—at least one large hole in the bottom of the pot. Plant in a soil specifically formulated for cacti or succulents.

Choose a southern or southwest-facing window that gets plenty of bright, indirect light in which to keep your aloe. The temperature in the space shouldn’t drop below 60F.

To keep your aloe looking green and well-proportioned, avoid exposing it to too much bright direct light, which can cause leaves to brown. It’s also a good idea to rotate the plant periodically so that all leaves can grow evenly and get exposure to good light.

How to Care for Aloe Plants

Since they’re well-suited to arid conditions, aloe plants can live long and thrive with very little care. Water deeply but only when the soil has completely dried out—every few weeks at most—and cut back on watering during the winter months.

Too much water can cause the roots to rot. Do not allow your aloe plant to sit in standing water.

Aloes don’t need to be repotted often; in fact, they can thrive in a slightly overcrowded container. But you’ll want to replant them in a container a few inches larger in diameter every few years to keep it from becoming rootbound. You can check to see if your aloe plant is outgrowing its pot by carefully picking up the container and looking at the drainage holes. When roots are growing out of the drainage hole, that’s a sign that it’s time to repot.

Most varieties of mature, healthy aloe plant will send up a tall spike each winter with a series of colorful, tube-shaped or trumpet-shaped orange, red, or yellow flowers. Once the flowers fade, cut back the spike at its base with clean, sharp shears.

Mature aloe plants will also grow babies, or “aloe pups.” These can be left to grow alongside the mother plant—just watch for signs that the pot is getting too crowded, like a tired-looking mother plant surrounded by several pups. The pups can be removed and potted up as new plants, while the mother can be repotted with fresh soil in a container a few inches wider in diameter. 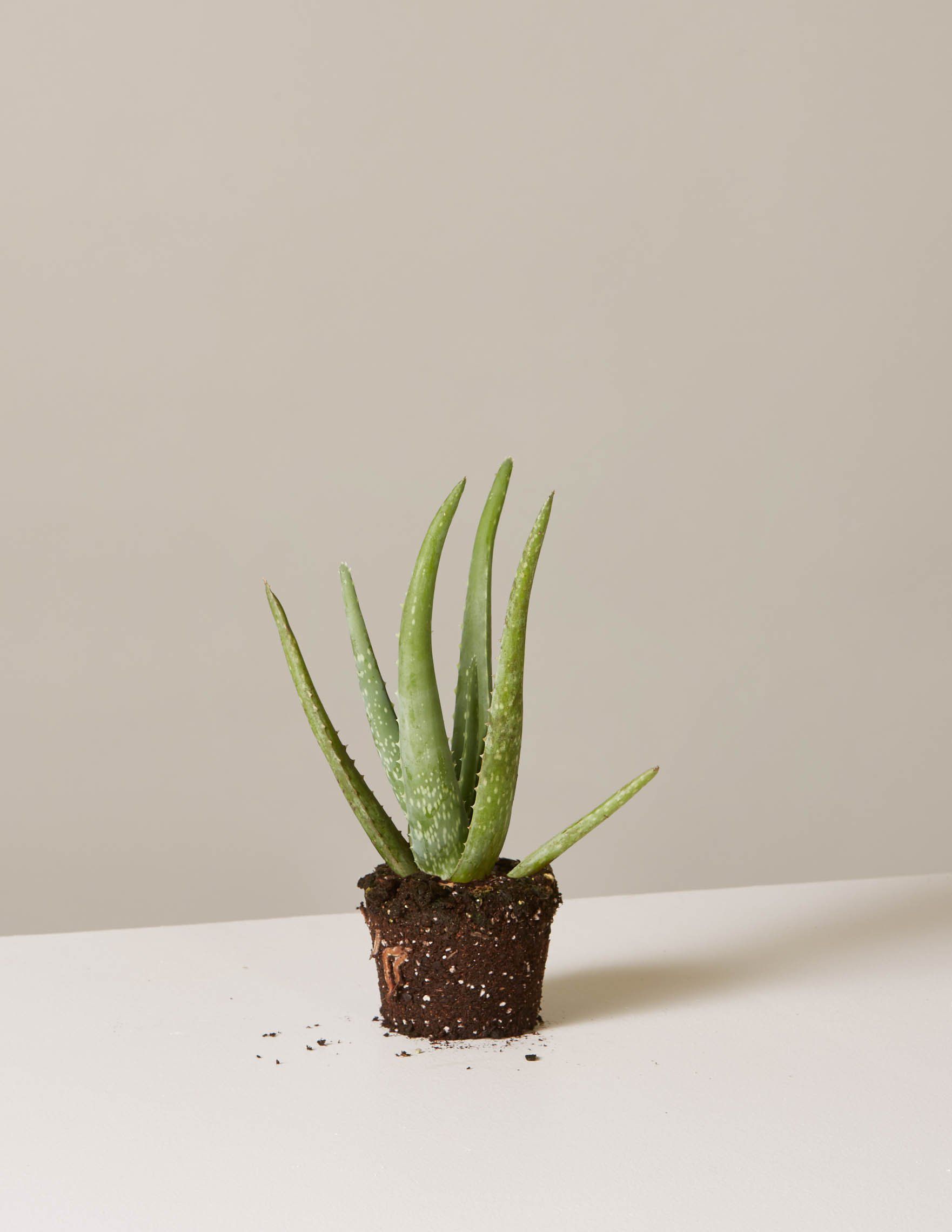 How to Propagate Aloe Pups

The easiest way to propagate aloe requires just two things: a healthy mother plant and time. If your aloe plant is happy in its conditions, it will regularly produce small plants that will grow out from the roots of the larger plant.

If you want a fuller-looking container, you can simply leave the pups attached to the mother plant, where they’ll continue to grow alongside it. You can also remove and propagate aloe pups into new plants that you can use to decorate other areas of your home or give as gifts.

Step 1: Choose the right time to remove the aloe pup.

It’s exciting to see a new green shoot coming up from the soil in your aloe pot — but don’t be too hasty to send that pup off on its own. Wait until pups have several leaves, or until they’re about 20 percent of the size of the parent plant, before removing them.

Step 2: Cut the pup away from the mother plant.

Remove the soil around the base of the pup so that you can see where the pup’s roots meet the mothers. Choose a place to cut the roots and separate the plants with a clean, sharp blade so that the pup will have a complete root system once it’s removed. Using a sharp, clean tool will help the cut callus over and help prevent transmission of plant diseases from whatever you used your clippers on last.

You’re almost done! Simply plant the pup in succulent soil. Give it a week before watering, then care for the pup as you would a mature aloe plant. With moderate to bright light, low humidity, cool temperatures, and water only when it’s bone dry, it’ll flourish and produce new pups just like its parent.