How to Cook Bacon in the Oven, Because It's The Easiest Way to Do It

Some tasks have been approached the same way for so long, it seems impossible to imagine doing them any other way—and cooking bacon tends to fall into this category. For countless mornings, bacon lovers have likely dropped strips into skillets without considering any other cooking alternative. And while that's understandable, given that hearty bacon and a heavy skillet seem to go together perfectly, this method often leads to searing pops of grease and a scent that lingers long after the meal has finished.

Instead of preparing this beloved meaty side in a skillet, we suggest cooking bacon in the oven. Cooking bacon in the oven lets it heat evenly, so that you can cook it precisely to your desired level of chewy, crispy, or somewhere in between. The mess is confined to a single sheet. And since a sheet pan has far more surface area than your standard frying pan, you can cook a whole pound at once—enough for a true brunch party.

The best part? All this can be done with minimal attention. Just line a sheet pan with foil; lie your strips of bacon across it; and pop in the oven. Since the bacon is cooking in the heat of the oven, as well as in contact with the hot pan, it’s getting heat on both sides; you don’t even need to flip it.

Which leaves you more time and attention to tend to your delicate omelets, griddle up your French toast—or, really, just pour those Mimosas or Bloodies and get brunch started already.

To get started, collect the following supplies: 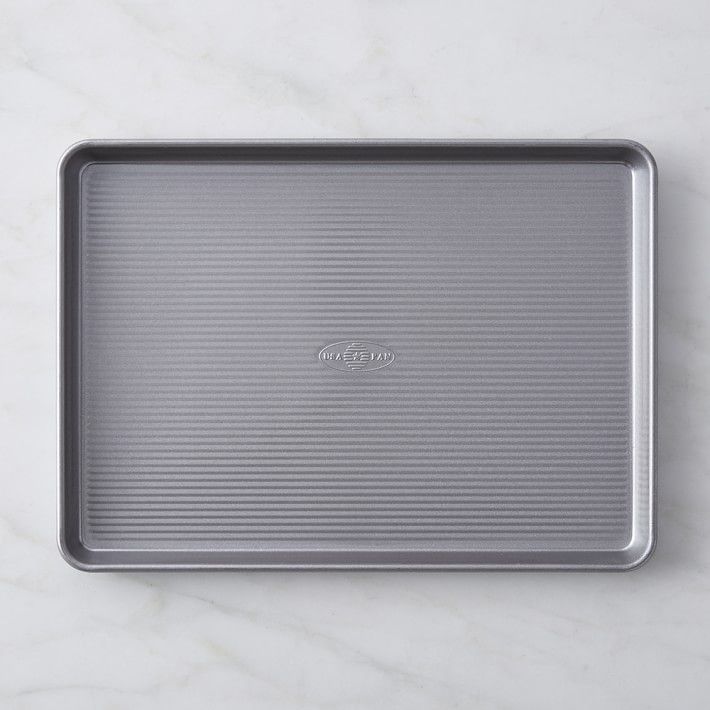 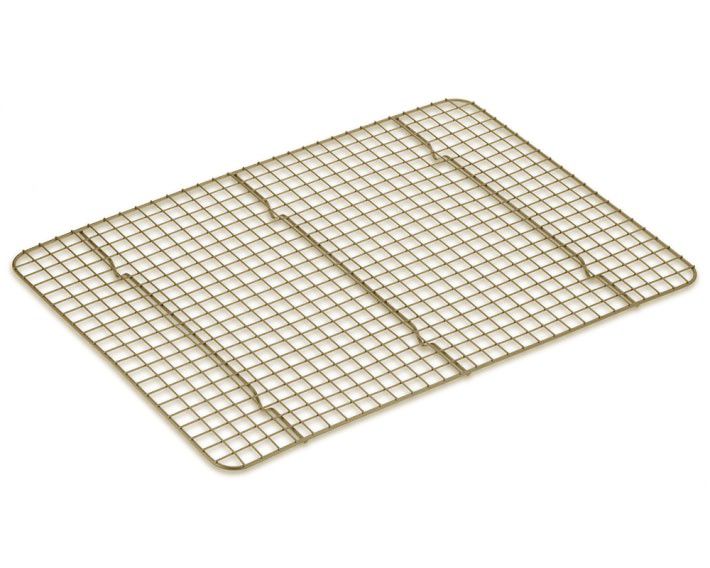 1. Place the rack in the middle of your oven. (If you want to double the recipe, place two racks in the upper and lower thirds.)

2. Preheat your oven to 400° F. Don’t get impatient here; let it heat up fully, which will let your bacon really crisp up.

3. While the oven heats, line a sheet pan tightly with foil, for easier cleanup later. (Make sure the foil lines the sides of the sheet pan, not just the bottom, so you contain all that grease.) Lay your bacon, one slice at a time, across the foil-lined sheet. The bacon will shrink as it it cooks, so it’s all right if the pieces overlap a bit. Just don’t stack them atop each other.

5. As the bacon cooks, line two plates, or another baking sheet, with paper towels.

6. After ten minutes, rotate the pan 180 degrees; that way, if your oven has hotter and cooler spots (and most ovens do), it’ll cook more evenly.

7. The total cooking time will depend on the thickness of your bacon and just how chewy or crispy you like it. For thinner bacon, take a peek five minutes after rotating the pan, but it might need up to ten. Thicker bacon, start checking at ten minutes after rotating, but it might need up to twenty. The longer you cook, of course, the more crispy your bacon will be.

8. Remove from the oven. Use tongs to transfer each strip of bacon to your paper towel-lined plate. If you like your bacon a little greasy—really, that can be part of the fun—let drain for a minute or two, then serve. If you’d prefer a drier crisp, dab the bacon with more paper towel before serving.

A cardinal rule of cooking bacon: never pour the grease down the sink. It may look liquid when it’s still hot, but once it cools, it congeals into a solid, which can clog your drains like nothing else.

A much better alternative—here’s where that aluminum foil comes in—set the sheet aside and let the bacon grease cool in the pan until completely solidified. Then remove the foil and throw it away, fat and all. Your baking sheet will need a quick soap-and-water wash afterward if it’s a little slick, but using foil will save you most of the mess.

Recipes With Bacon to Try

Why We Like It: Tieghan Gerard at Half Baked Harvest combines bacon into a salad with toasted hazelnuts, pomegranate arils, fresh thyme, and apple butter for a meal that's simultaneously filling and light. Orange zest and red pepper flakes add more depth of flavor, too.

Don't Forget: "I love serving the salad just after it has been tossed with the hot vinaigrette so that the salad is a little warm," Gerard notes.

Why We Like It: For a second option, Tieghan Gerard at Half Baked Harvest uses this oven technique to bake candied bacon, which she makes using pure maple syrup, cayenne pepper, and brown sugar. When added to a plate with pancakes, it's the perfect comforting meal.

Don't Forget: "Make sure that all of the slices are evenly coated in brown sugar," she adds.

Why We Like It: Heidi Larsen at Foodie Crush creates this classic feast using chuck beef, medium cheddar cheese, a layer of bacon, thinly sliced onion, tomato, pickles, and brioche buns. It's exactly what you'd expect at a sunny barbecue.

Don't Forget: "Place the patties on the grates and let them cook, undisturbed, until they release from the grill and are ready to flip," she says. "If they are sticking to the grates, a crust hasn't formed and they aren't quite ready."

Why We Like It: Natalie Mortimer at The Modern Proper has an idea for bacon that you've already prepared in a large batch: Add a few slices to this mushroom chowder. It's made with thinly sliced leeks, finely chopped celery, chopped chanterelles, dry white wine, and chicken stock that's cooked with fresh herbs and spices.

Don't Forget: "As soon as the stock begins to boil, turn [the] heat back down and simmer for 15 minutes until the potatoes are tender," she notes.

Why We Like It: Jessica Merchant at How Sweet Eats serves up this easy pasta salad with cuts of bacon, sweet corn, zucchini squash, grape tomatoes, and minced garlic. Tossed alongside fresh herbs and crumbled feta, it's the ideal recipe to bring to an outdoor potluck.

Don't Forget: "You can serve this hot or cold," she notes. "Add anything else you'd like. I added a bit of sliced grilled corn from the cob on top of mine—I had it left in the fridge."

Up next: 15 Healthy Cauliflower Recipes Disguised as Comfort Food.