An Instant Pot Can Replace Your Oven and Stove

You can't deny the Instant Pot's incredible popularity on the internet and social media. Not only has the seven-in-one kitchen appliance scored thousands of five-star reviews on Amazon, but the gadget has earned the approval of foodies and busy working parents alike, thanks to its ease, convenience, and ability to wear so many hats at once. It's often hard to know how much of a gadget's popularity is pure hype, but in this case, it's the real deal—an Instant Pot actually can replace your oven and your stove!

An Instant Pot pressure cooks, slow cooks, steams, cooks rice, and sautés all in one appliance. If you have a small kitchen with minimal storage, this gadget will be a life (and space), saver. Even those with a larger kitchen can condense and simplify, opting for just an Instant Pot rather than cabinets filled with appliances and various sized pots and pans.

Though stews, soups, and chilis might understandably come to your mind when you think of an electronic slow cooker, when you start looking at the versatility of all the recipes you can make with an Instant Pot, it can be used to cook basically anything!

Gina from the blog SkinnyTaste used her instant pot to make effortless hard-boiled eggs. Using the steam tray that comes with the pot, you can perfectly hard-boil eggs in just seven minutes.

You can cook a whole spaghetti squash in 20 minutes with just a cup of water and the steam tray. Tieghan from Half Baked Harvest went a step further, making turkey meatballs and red sauce (all in her Instant Pot) to round off this healthy take on comfort food.

Tieghan also uses her Instant Pot to make quick shredded chicken. Combine chicken breasts with liquid and seasonings, then cover and cook on high pressure for perfectly shreddable chicken in eight minutes. She used the chicken to make pineapple barbecue chicken bowls, but you could also it for tacos, soups, or sandwiches.

Erin from the blog Well Plated by Erin makes refried beans in 45 minutes using an Instant Pot. Add the beans, broth, and your preferred seasonings to the bowl, then use the "bean/chili" setting for the protein-packed side. Note that when the beans are done, they might be a little bit runny, but as they cool they'll thicken up to the consistency you'd expect.

Both fancy ramen and the two-cent kind can be whipped up in the Instant Pot—no stove or oven required. Tieghan from Half Baked Harvest combined hers with chicken and veggies for a light and healthy bowl.

This one might seem a little intimidating, but you can make your own Greek yogurt like Rachael from Eazy Peazy Mealz, and it's not as difficult as you'd expect. Use live cultures overnight on the "yogurt" setting for a low-cost effort healthy snack with minimal effort. 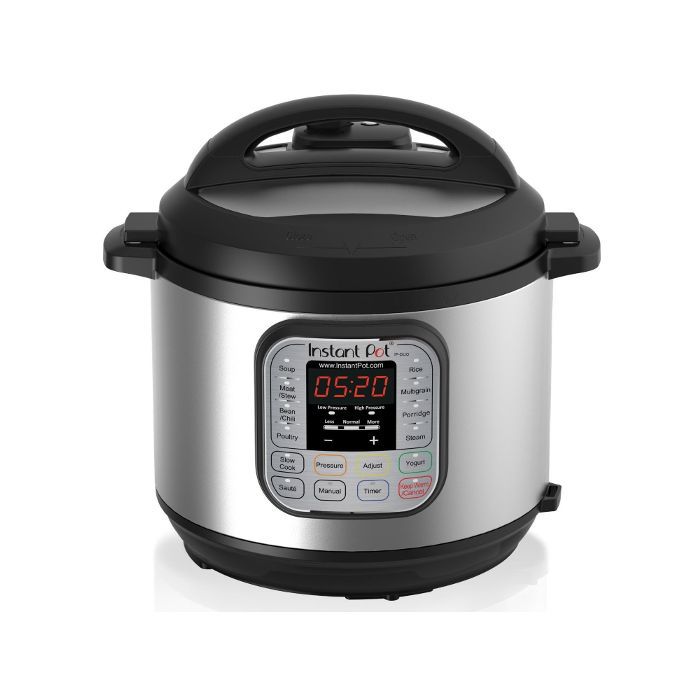