How to Grow English Ivy

English ivy (Hedera helix) may be better known as an outdoor plant that grows along the exteriors of English castles and up the trunks of tall trees, but the fast-growing climbing vine also makes for a charming houseplant. When grown indoors, it’s a lovely trailing plant for a hanging basket and is much easier to manage than ivy grown outdoors, which can be invasive.

In fact, English ivy is so invasive outdoors that some states, like Oregon, have outlawed the sale, transport, and even propagation of the plant. So before purchasing or propagating a houseplant for your collection, be sure to check that it’s legal where you live. It's also toxic to people and pets, so you'll want to consider placement carefully. That said, we’re huge fans of the classic vine and appreciate the sophisticated element it adds to our digs.

Keep your English ivy’s soil just barely moist (but not soggy) at all times. These plants prefer a humid environment, so keep a spray bottle filled with cool water at the ready to give them regular misting. Since English ivy is naturally fast-growing and pretty vigorous, it needs relatively infrequent feedings. Give your plant regular houseplant fertilizer diluted to half-strength three or four times per year, but avoid fertilizing in the winter when growth is dormant. English ivy can be repotted using standard houseplant soil during any time of year.

English ivy thrives in cooler, humid climates without too much sun. If possible, choose a spot in your space that gets lots of bright, indirect light but not direct sunlight. However, English ivy can also handle part shade or full sun. It does best when night temperatures are in the upper 50-degree range, with days in the upper 60-degree range.

When it comes to soil, English ivy isn’t picky. You can use standard, well-draining commercial potting soil.

Just as it will on a building or tree trunk outdoors, English ivy will attempt to climb walls in your home. The plant grows aerial roots along its stem to attach itself to vertical surfaces, which can cause damage to the material it’s climbing.

It’s a good idea to grow English ivy in a hanging basket in a spot where its trailing vines won’t try to climb and potentially damage walls or furniture.

You can also grow your plant in a pot with a stake or topiary frame, which the vines will climb to create an attractive shape. Or simply make a point to keep the tips of your English ivy pinched back, which will keep tendrils from growing where they shouldn’t and promote bushier growth.

While, in theory, you could clip and propagate some vines growing outdoors to bring inside, certain varieties of English ivy are better suited for indoor growing. This is because the original species typically seen in landscapes and on stately old structures has large, widely spaced leaves that can look weak and scraggly with only a few stems in an indoor pot.

Luckily, there are dozens of attractive cultivars of English ivy bred specifically for indoor growing. Look for cultivars like ‘Needlepoint,’ with a profusion of small, sharply pointed foliage, or ‘Asterisk,’ which features five-pointed, star-shaped leaves. ‘Lauren’s Lace’ has green leaves with ruffled edges rimmed in yellow, while the leaves of ‘My Heart’ are heart-shaped with a deep green color and pale veining.

10 Types of Ivy Every Plant Lover Should Know

How to Propagate English Ivy

It’s best to take cuttings for propagation in spring or early summer, but you can root the cuttings you pinch or trim back from an overgrown plant any time of year—they’ll just take longer to root. English ivy can be propagated by planting stem cuttings into a soilless rooting medium.

Step 1: Prepare the pot by filling it with rooting medium. Spritz or lightly water the rooting medium with water so that it’s moist but not overly wet. Using a chopstick or a pencil, poke holes a few inches deep into the moist soil.

Step 2: Select a few healthy stems to remove for propagation. Choose stems that are woody but still flexible—not the oldest or the youngest. Cut five-inch segments, making the cut just below a leaf node (the spot on the stem where a leaf grows or has grown). Trim off the lowest leaves.

Step 3: Apply rooting hormone to the cut end of each stem, if using. Plant the stems cut-side down in the holes and pat the soil around them gently so they’re firmly in place.

Step 4: Place a plastic bag over the pot, creating a greenhouse-like environment to hold in moisture, and attach it around the bottom of the pot with a rubber band.

Step 5: Put the cuttings in a spot with bright, indirect light, but be sure to keep it out of full sun. Check the moisture in the container regularly, and spray the soil with water if needed to keep it moist.

Step 6: When you see new growth on the cuttings, typically in one to two months, transplant them into their own containers with standard potting mix and care for them as usual.

Issues with your English ivy plants aren't always easy to diagnose as they may be caused by one of several problems. To start off, make sure your ivy is in a pot with good drainage and isn't rootbound.

Once you've addressed any container issues, you can troubleshoot further. Ivy tends to be especially picky about moisture, making it prone to issues stemming from too much or too little water.

While it won't make up for poor watering habits, giving your ivy a spritz from a spray bottle each day can help keep leaves nice and hydrated, especially during dryer months.

Browning English ivy leaves can mean one of two things. First, if your ivy leaves are browning and eventually dropping, you might be overwatering. This causes the roots to drown, which means they can't deliver nutrients or water to the leaves. Alternately, browning leaves that appear wilted or even crispy is a sure sign of underwatering.

Yellowing leaves can also indicate over or underwatering. Aim to water about once a week, or more specifically when the top inch of soil has dried out. You want consistently moist but not soaked soil.

Faded leaves or loss of variegation usually points to inadequate lighting. While ivy doesn't require full sun, it does prefer bright, indirect light, and this is especially true for variegated varieties. If the leaves appear faded, try moving your plant to a brighter spot.

A dry climate caused by air conditioning, forced-air heat, or even your location can create the conditions for an infestation of red spider mites. To keep these pests at bay, give the leaves of your English ivy plant a weekly washing in your kitchen sink or bathtub with a mild soap, and then rinse the leaves with cool water. Giving your English ivy plant enough bright, indirect light is another way to keep pest infestations down.

When your ivy becomes top-heavy or totally rootbound—likely every one to three years—these are signs that it's time to repot.

Choose a container that's one to two inches wider than your plant's current pot and line it with fresh, well-draining soil. Loosen the roots from the current container by turning the plant upside down into your hand, taking care not to damage the vines. Tap or gently squeeze the sides of the container until the plant releases. Place it in the new pot, fill with fresh soil, and give it a good drink of water. 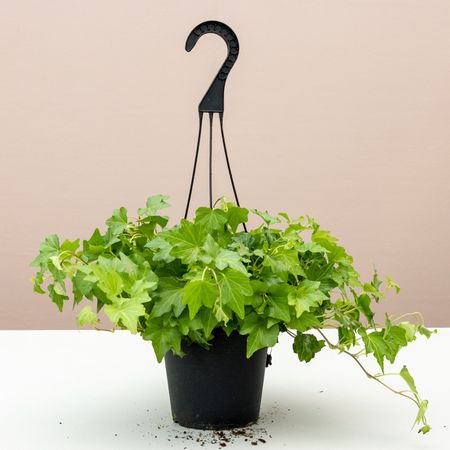 Can English ivy be grown indoors?

You're probably so used to seeing ivy crawling all over the place outside that you've never even considered bringing it indoors. But English ivy can be a beautiful addition to your houseplant collection, even if it is a bit finicky.

Is English ivy easy to care for?

We'd rank English ivy as an intermediate houseplant to care for. With attentive tending, a beginner should have no problem keeping this plant happy, but it's probably not the best choice for more neglectful plant parents.

How fast does English ivy Grow?

Indoor ivy takes a couple of years to become established, but once it is, it can grow up to nine feet annually. Give it proper care and monthly fertilizing during spring and summer to promote growth.

The 10 Best Indoor Hanging Plants to Turn Your Home Into a Jungle
Article Sources
MyDomaine uses only high-quality, trusted sources, including peer-reviewed studies, to support the facts within our articles. Read our editorial guidelines to learn more about how we keep our content accurate, reliable and trustworthy.