The Original Women's Olympic Marathon Champ, Now 60, Is Still at It

Needless to say, after Benoit Samuelson crossed the finish line at the '84 Los Angeles Summer Games, her name became synonymous with women's running. Since taking home the gold, Samuelson, now 60, hasn't stopped hitting the pavement, competing in marathons, working as a consultant with Nike, and becoming an advocate for women athletes in the process. When I meet her after running in Nike's Go LA 10K, I'm in awe of her composure after running more than six miles. But then again, what's challenging for an amateur runner like myself is just a warm-up for the Olympic champion who casually ran six miles on the day her son was born. Like I said, she's a champion.

Ahead, Samuelson tells MyDomaine how she stays motivated to hit the pavement every day, why she forgoes listening to music while she runs, and what she thinks is next for the athletic equality movement.

How often do you run?

Most of the time, I run every day. I've had a bit of a knee injury, so I'm doing more cross training. I had a scope in late November after Thanksgiving, so I've done a lot of Nordic skiing and alpine skiing this winter. Now that the weather is getting a little warmer, I'm back on the bicycle. It's good to mix it up. I have 150,000 miles on these legs, so I'm learning more about the benefits of cross-training.

What motivates you to hit the pavement every day?

The passion for the sport. It just makes me feel good. It wakes up my body and my soul. A day without running is a day that's not complete. If I can do another form of exercise, that's okay, but it's not the same as running.

In a piece you wrote for ESPNW last year, I read that you even ran six miles on the day that your son was born. Is that right?

Yes, it was close to that, and that was pretty cool. He was actually breached a week before he was born. The doctor was going to try to rotate him manually, but he rotated himself in the middle of a run. It's one of the few times I've had to stop during a training run because the sensation of this rotating little body inside of me was sort of overwhelming. I thought I was actually going to give birth on the site of the road, which would have been appropriate.

What inspires you to keep competing?

Just the fact that I like to try to tell a story to motivate myself to keep going after goals. I'll never run as fast as I once did, but I can still set goals for myself.

What goal do you currently have your sights set on?

Well, I was going to stop marathoning in 2008 with the Olympic trials in Boston because that's where I started my career and I thought it would be appropriate to end my career there, but then the stories kept coming. My daughter ran with me today, and I'd love to run a sub-three-hour [marathon] with her at 60 and she's 30 so there's the whole 3-60-30-60 full circle. It's the stories that really keep me motivated. Every runner has a story to tell; they just have to unlock those stories and tell them.

Speaking of stories, with the 2028 Olympics coming up in Los Angeles, are you counting down the days?

Who in the sport do you admire and look to for inspiration?

I look at all the up-and-coming runners and the next generation of runners, people like my daughter. And people like you, the first-time runners here today. You all have stories to tell, and even though it might have been a bit of a challenge for some of you running today, you're now part of this community.

What do you think is next for the athletic equality movement? What is something that you'd like to see happen?

I'd still like to pull more women off the sidelines and into sports. I want them to "choose go." I remember, when I first started running, I was a little bit embarrassed to be seen out there on the roads because it was a male-dominated world and a male-dominated sport. And then, I just said, "Who cares what other people think? Run your own race." And that's exactly what I did in [the L.A. '84 games]. The pundits and the press thought I was making a big mistake by skipping the water station [during the race], but what I discovered was that you can't run anybody else's race but your own. We're all in these races together, but you've got to follow your heart.

Do you listen to music while you run?

No, I don't. I don't listen to music, but I'll tell you, I'm doing a lot of cycling now with cross training and I'm thinking maybe I'd like to have music when I'm cycling. But running is my communing with nature and myself, and that's why it's so special that this event is on Earth Day today. Usually, the L.A. freeways are covered with cars and carbon emissions, and today it was totally carbon-free on Earth Day. That's really cool. 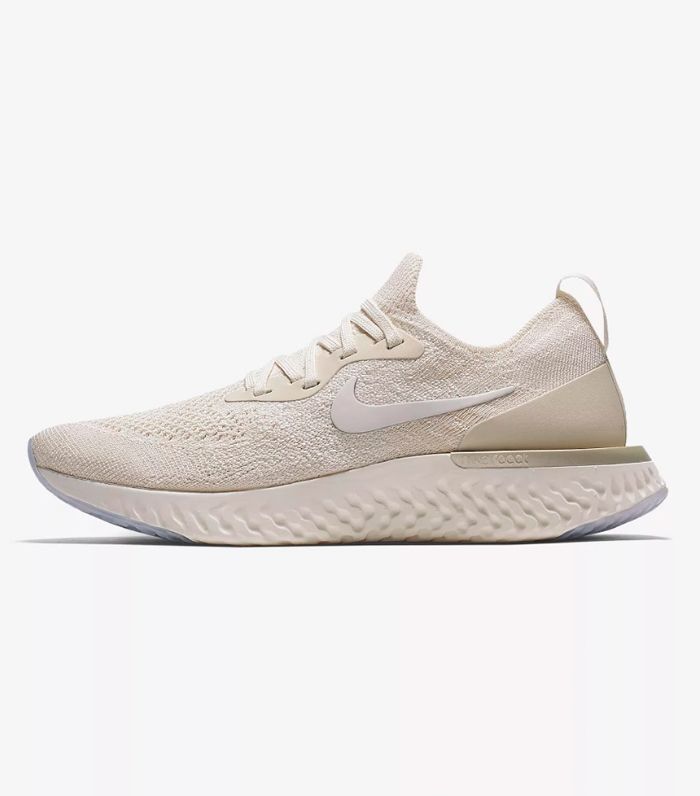 Up next, a Nike trainer shares her favorite workout for women (that gets results).