If You Love Korean Food, You Need This Cookbook

Though the cuisine is ancient, traditional Korean food in the Western world has gotten tremendously popularized within the past decade—you can even find kimchi at local supermarkets. But before Koreatowns across the country became hot dinner destinations for mass America, traditional dishes had modest beginnings back in South Korea, which was once considered a developing country.

In her new comic cookbook Cook Korean! (Ten Speed Press), author and illustrator Robin Ha not only teaches readers how to make every traditional Korean dish—like your favorite marinated beef barbecue (kalbi), stone-pot fried rice (bibimbap), and cold buckwheat noodles (naengmyeon)—from their own kitchen, but she includes fascinating historical trivia that culturalists will appreciate. (For instance, there’s a reason why fermentation is so rampant in Korean cuisine; it’s because most households were too poor to own refrigerators.)

The imaginative Ha, who emigrated from South Korea to Alabama as a teenager during the ’90s, fills the colorful pages of Cook Korean! with detailed images, ingredients, and step-by-step instructions for even the novice chef. The result is a super-comprehensive guide to literally every kind of Korean meal you could want, from the everyday sides (i.e. banchan) to the more elaborate noodle and rice dishes that could rival anything you’d find at a Korean restaurant. Ahead, we chat with Ha about why Korean food is finally having its moment, what the biggest misconceptions are, and her work as a comic illustrator in a male-dominated industry.

MYDOMAINE: I feel like a book like this wouldn’t have existed 10 years ago. Why do you think Korean food has gotten so popular?

ROBIN HA: It was time that Korean food got noticed. All the other Asian ethnic foods had their moment. Vietnamese, Thai, Chinese, and Japanese all got their chance to be recognized in America, whereas Korean food stayed within the Korean community for a long time, even though there were many Korean people living in the States. But I think people were finally ready to take on the very strong and pungent flavors of Korean food over the years.

MD: What made you start cooking Korean food?

RH: After college, I moved to New York, where you cannot go out to eat every night. You’d go broke quickly. I also lived really far from Koreatown, so I started watching YouTube videos, reading cookbooks, and calling my mom for instructions on how to make Korean food in my little Brooklyn kitchen. I already knew how to make a bunch of dishes, but when I got the book deal, I had to learn several new ones. For instance, there are dishes made at Korean restaurants that no one would think to make at home because it’s reserved for weddings or ceremonies, but I still wanted this cookbook to be a well-rounded showcase for all types of Korean food. Luckily my mom knew how to make everything. She grew up in the days when all young girls would have to help their grandmothers in the kitchen, so she was a fountain of knowledge.

MD: This book feels very much like an homage to your mother’s cooking.

RH: There were no Korean restaurants when I was growing up in Alabama. There were only a few Korean people living there, and it was a trying time getting used to the culture shock. Even though hamburgers and fried chicken was getting popular by the time I left Korea, I didn’t like greasy American food and condiments like ketchup and mayo. But my mom used to cook for me all the time growing up. Every day, I would eat three home-cooked meals, and she would make them very quickly and it would taste very complex and delicious. I assumed it was difficult to make. But when I got around to learning how to make these foods on my own, I found out it was actually so simple. The complex flavors just come from the Korean condiments. The ingredients are basic. A lot of friends were asking me how to make Korean food, so I launched a blog called Banchan in Two Pages, which is how I started drawing Korean recipe comics.

MD: How long did it take you to complete the book?

RH: It took me about a year from start to finish. It became my life. I didn’t do anything else. I just cooked, drew, and ate food for a whole year. I gained 15 pounds! I would buy all the ingredients and take notes while I cooked with my mom. And Korean mothers never measure anything, so I’d have to write every step down and stop her if she tried to add in extra ingredients just because she wanted to. Then I’d make the dish again on my own and try to replicate my mom’s recipe. If I thought it could be better, I’d tweak the recipe. Then I’d make the dish a third time just to make sure it worked. It was a time-consuming process.

MD: What are some misconceptions people have about making Korean food?

RH: The flavor profile of Korean food is so different from Western food. People might get overwhelmed or lost if they went into an Asian market because they don’t know where to begin. But fundamentally, Korean cooking is similar to one-pot Italian cooking. Sauté some vegetables, throw in some sauce. That’s it. You really don’t do much. The most important first step is to get the Korean condiments into your pantry. There’s an introduction to the seven key ingredients in my book. Once you get them, you can make any Korean food.

Another misconception is that people think Korean food is all about grilling meat. Sure, kalbi is popular, but it’s not the majority of our cuisine. It was a luxury to eat meat back in the day. If you were lucky, you got to eat meat once a month. Korean food is actually influenced heavily by vegetables and seafood that was salted to preserve them. People also think Korean food is all meat and all spicy, but you can always adjust the spiciness by putting in less gochujang or chili flakes. The dishes are versatile. You can always tweak it to what you like.

MD: You cover the traditional stuff, but there’s also a chapter at the end for Korean fusion food. Tell us about how you decided which recipes to include.

RH: I was thinking about what popular foods are at this time in America. Things like tacos and burgers popped into my head. I think they’re already great, but Korean condiments can enhance the meals. The easiest way to add Korean flavors to any American meat—like burgers, steaks, or meatballs—is to add the same sweet and salty condiments as you’d find in kalbi. The kalbi seasoning is soy sauce, garlic, sugar, and scallion. The marinade makes it delicious. I’ve never had bad Korean barbecue. It’s always great. Whereas I’ve been to American steakhouses where I’ve had bad steaks.

MD: Tell us about your work as a comic illustrator.

RH: My aesthetic is heavily influenced by the Korean comics I grew up reading called manhwa, which is very detailed and elaborate. I’m working on a memoir about my first year in America as a 14-year-old Korean immigrant living in Alabama back in the 1990s, when I couldn’t speak any English. The other project is a supernatural thriller. I never read superhero comics growing up, but I did a Fantastic Four story for Marvel, so I ended up dabbling in many different genres. But comics are a great medium to tell all kinds of stories: romance, humor, action.

MD: Finally, what does your mom think of your cookbook?

RH: She’s a typical Korean mom. She would never be able to show excitement on her face and say, “Oh my god, this is amazing!” But she can’t stop talking about the book to her co-workers and friends. She has it beside her bed, and she reads it every night. She doesn’t say it, but I think she’s very proud. 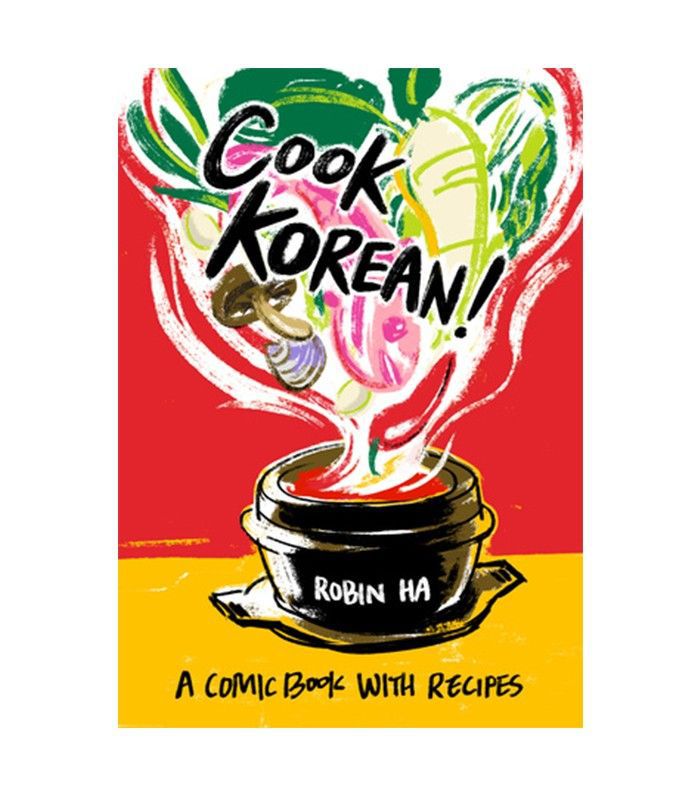