It's a warm and sunny afternoon in Los Angeles when I find myself seated with Kristen Bell at a small table at Ysabel, a contemporary restaurant tucked away in an unassuming building on Fairfax Avenue. Bell, star of the NBC hit TV show The Good Place and perhaps best known for her role as Veronica Mars, is relatable as ever. When we meet, she's hurriedly snacking on a vegan banh mi sandwich from Mendocino Farms during the little time she has before the event that brought us together—a celebration of her social impact brand's recent accomplishments.

Bell is among the co-founders of the philanthropic company This Bar Saves Lives, which aims to end childhood malnutrition worldwide through its one-for-one business model, providing food aid for every granola bar purchased. Its success is the reason for the event that's about to begin on the beautiful outdoor patio of the restaurant. Before the festivities begin—and in between bites of her sandwich—we chat about self-care, parenting, and why Bell is so driven to give back.

Along with taking care of others, Bell says that self-care is a high priority for her. "One thing I've realized is I've been very bubbly and go, go, go, and I haven't recognized that I think a good 50% of me is an introvert," she says. "When I'm too much of an extrovert, I wither a little bit, and I get depressed and I get anxious." So how does she cope? The key is taking time to herself when needed. "Even if I have a house full of people and my husband's playing games with people, if I need to go retreat into my room and listen to a podcast or just read a book, I'm okay with that."

Bell also makes sure to spend time reflecting in order to stay balanced and treat her introverted side with care. "I take a fair amount of time just to reflect, not in like a Buddhist way, but just to seriously think. Whether it's taking 20 minutes to meditate or reading a magazine, it's something that doesn't have any attachments to anyone else," she says. "If I don't do that and I'm just doing things for other people or trying to show off like 'I can rule the world' and 'I'm a super mom,' I'll wither. I will wither and I will rot," she says with equal parts serious contemplation and light-heartedness.

On Being a Mom

Bell walks me through some of the tried-and-true parenting tips she's picked up thanks to her two children, Delta and Lincoln. Her advice includes everything from giving attention to her older child when both kids are crying "because the baby won't remember" to using the one finger rule. "I'm just getting out of toddler phase, but it is so hair-raising all the things you need to deal with," she admits. Right in the middle of explaining her beloved one finger rule—which stipulates that her toddler can touch anything she wants to as long as it's with one finger—Bell let's out a giggle, remembering a recent incident with her 5-year-old and, coincidently, the one thing she wishes someone had told her about before she had kids.

"One thing I wish someone would have told me is how many hard conversations you have to have with your kids at a very early age," she says. "You think the hard conversations come when they're 15, and you are wrong. They come when they are 3," Bell states matter-of-factly. One topic in particular that Bell has already had to tackle with her young children is death, but she's proud of the way she handled the dreaded conversation. Instead of making up any kind of story, she simply told her kids the truth, which she confesses was terrifying. "You sit there and you hold your fucking breath and you feel like slitting your wrists because you just ruined them. And they cry for a second, or they look sad, and 20 seconds later they're fine," Bell says.

According to her, kids are surprisingly able to understand difficult information. "I wish someone would have told me that when you restrain from telling them actual facts, you're creating a fairy tale in their head and you're not preparing them for real life." Thanks to Bell's approach to parenting, her kids appear to be prepared for just about anything. She proves this by finally revealing the incident that made her stop and laugh mid-sentence when she remembered it moments ago. "My 5-year-old says to me the other day in the car, 'When we bury papa, do I need to bring my gardening tools? Because I have a shovel,'" Bell says. "I almost had to stop the car—that's the weirdest and cutest thing anyone's ever said."

"I've always been very philanthropic, but, to be blunt, for selfish reasons. I sleep really well at night," Bell says as she explains how she became involved with This Bar Saves Lives. It all started with her friend and former Veronica Mars co-star Ryan Devlin. "He had gotten back from this humanitarian trip seeing severe acute malnutrition in children up close in person and it really resonated with him, and he said why is no one doing a one-for-one in the food space," she explains. This idea turned into the impactful brand Bell is a part of today, and it's just one of the many philanthropic efforts that are close to her heart. For her, it's important to show her children the importance of being a good person and helping others. She tells them, "We were given two hands for a reason—one is for you and one is to help someone else."

Take note of Bell's self-care advice and parenting tips and help her end malnutrition by stocking up on granola bars from This Bar Saves Lives. 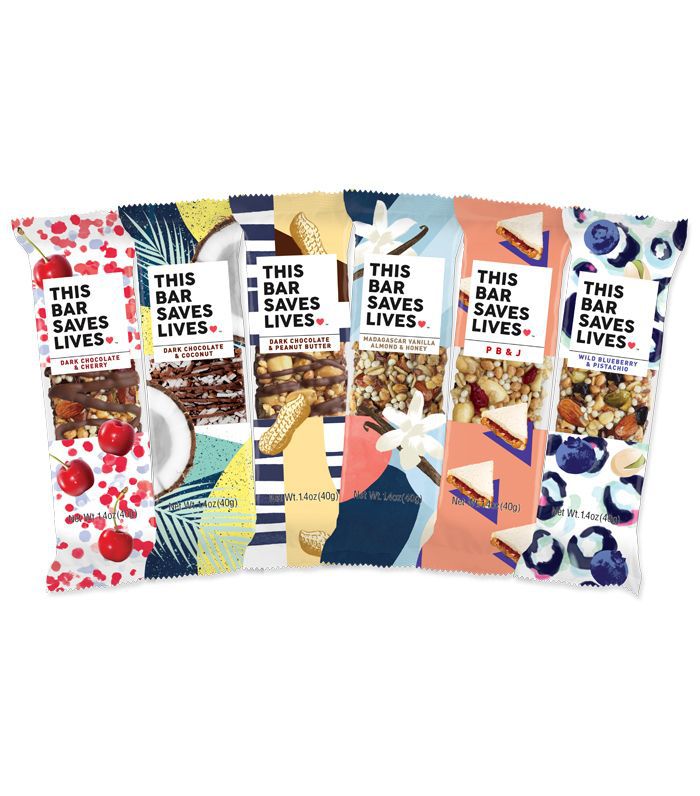