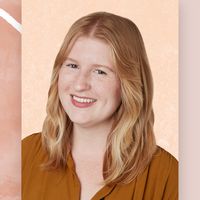 Kate McKenna
Kate McKenna is a Senior Editor for MyDomaine. She oversees content focused around remodeling, home how-tos, cleaning, and design and has 10 years of writing and editing experience.
MyDomaine's Editorial Guidelines

Katheryn Winnick has made a career out of playing strong, no-nonsense characters, from the historical drama series Vikings to the ABC crime drama Big Sky. When she's not acting and directing, the Ukrainian-Canadian also works raising awareness and funds for the Ukraine with her foundation, The Winnick Foundation.

For Winnick, who lives in L.A. but films Big Sky in New Mexico, it's important to create a home where she can feel calm and grounded. "There are certain things that I have in every home because I travel so much," she tells MyDomaine. "You can make a home wherever you are."

Ahead, Winnick shares her top 3 essentials she has whether at home or on the road.

Winnick's L.A. beach house is almost completely decorated in white and linen, so she loves to fill her home with white flowers—and that's something that has carried over wherever she stays for work as well. While she says she prefers white flowers in general, orchids are her go-to.

"White orchids just add something, without taking anything away," Winnick says.

And while orchids are notoriously difficult to take care of, and to make flower again and again, Winnick has a trick for keeping them happy. "You can't overwater them, or else they will die," she says. "One ice cube is the perfect amount of water once a week, and you have to put it right in the middle of the leaves so it melts. And that I found is the lasting secret."

Winnick notes the importance of lighting and how that adds to setting the tone at home. "I love mood lighting," she says. "I think it's important to have something always on a dimmer."

But for Winnick, good lighting goes beyond light fixtures. Her beach house has a collection of vases filled with sand and candles, which began as a way to use vases she'd collected over years of being sent flowers. "Having a beach house and sand, it's so easy just to put sand and just a simple candle in," she says. And she notes that she enjoys lighting them every night. "It's a ritual. Sometimes with a glass of wine."

Winnick's love of candles goes beyond the lighting aspect as well, and she says scent plays an important role for her too. "In my trailer, I have my candles and my diffuser. I set it before I got to work and it just kind of sets the tone to really just stay grounded and know what's important," says says. "It keeps me reminded not to move too fast, and you know, appreciate every moment."

While Winnick says floral scents don't work for her, fresh, seasonal scents are her go-tos for both candles and her diffuser. "Definitely right now I'm into pinewood. Or if it's spring I like super fresh, citrusy," she says. "You can't go wrong with lavender either."

When you have a busy schedule like Winnick, sleep is an essential part of staying fresh and ready for the day ahead. And Winnick says her Dr. Joe Dispenza eye mask is something she never goes without, both at home and on planes.

"My friend Amanda has been doing it for years. She always explains how she sleeps better if she's in a cocoon," Winnick says about wearing an eye mask and ear plugs. "I've been using the mask and earbuds especially for planes, but also to sleep and I just fall asleep much faster. And I use the same mask in the morning for my morning meditation."