Clique Media Group (MyDomaine’s parent company) has a history of stylish offices. If the Los Angeles headquarters are any indication, we had big shoes to fill when we moved into a new, expanded place in New York City’s Union Square. Between six media brands, a large influencer network featuring top talent in the industry, and an ever-expanding fashion line, our rapidly growing office is also a revolving door for industry professionals stemming from the fashion, beauty, and lifestyle space.

“Our past offices have had a fashiony feel, and with this new office, I wanted to show that we’ve very much moved beyond that as CMG and into a global business," CMG CEO Katherine Power told MyDomaine about the Los Angeles headquarters. Naturally, the rapidly expanding Manhattan offices needed a striking workspace to match.

The bones of the office were in our favor: a wide open space on the 18th floor of a prewar building with tall ceilings and unobstructed views of the city’s West Side. But the original space, previously occupied by a software company, felt a little too lifeless for a dynamic media company. To create a workspace to match CMG’s vision, the MyDomaine team called on the help of The Studio at One Kings Lane.

“The girls at CMG had a very clear design aesthetic and vision for the space,” Sally Gotfredson, our interior designer, told us. “So the project was more collaborative and really just about editing and marrying what [CMG] had already done so well in their L.A. office with this NYC space. In the end, it maintained its own look while staying in line with the California headquarters.”

Take the tour to see how a few personal touches and revamped common areas transformed the way we work—they even enhanced creativity, productivity, and morale.

The original office had multiple unused spaces—which were at the core of the design strategy for the space. “The whole goal was to make the cookie-cutter office space feel more residential,” Gotfredson told us. “We did this by bringing in a lot of upholstered pieces in really pretty velvets, light leathers, artwork and accents you would typically see in a home.” Previously unused spaces were turned into informal meeting grounds, lunch rooms, and even a versatile photo studio.

“Before we came in, there was nowhere comfortable to congregate, have a quick meeting, or entertain clients, so I wanted to incorporate as much lounge seating as possible,” said the designer. “I have a feeling the back studio will have a lot of lives. The whole point was to create a space that could be easily moved around, rearranged, and styled in different ways.”

While the space was mostly underused before the redesign, it quickly became the preferred space for our editors to take calls, have a wine-and-cheese happy hour, or wind down between meetings. “You could pick up on the slight lavender in the rug, the green on the Bertoia chairs, or the black in the marble coffee table when they bring in different art and accessories. It’s also just a very conversational area that’s perfect for meetings or little wine after work.”

The goal for the entire office was to give it a more welcoming feel while still representing the identity of the CMG brands. “The lobby is a very serene area, and I love that the mirror reflects the west-facing windows with great views and light so nicely,” said Gotfredson. “It detracts from any cubicle-ness, which was the main idea. I grew up with an open-door policy in a family that loved to entertain and host parties, so I always try to capture a generally relaxed vibe that never feels too decorated. I think rooms should always evolve, and if I can help create a space to build upon for someone, then I’m happy!”

For the designer, creating a sense of space, even in a corporate environment, was at the core of CMG’s New York office needs. By adding upholstered pieces and a mix of modern and vintage, she was able to create a versatile, welcoming space with the limited color palette we wanted to infuse in the area: a combination of black and white mixed with subtle blush and beige tones. “It’s really about staying ahead of the trends of trusting what your gut reaction to a piece is,” she told us. “Once a certain style or movement floats back into fashion, it’s time to move on since you’re almost certainly not going to find a killer deal on it anymore. But if you just source what you love, your space will always feel fresh and timeless.”

The pièce de résistance of the entire space is without a doubt the reception and lobby. “It sets the tone for the office, every piece in there is incredible, and it’s a small space that packs a punch,” Gotfredson told us. “In my mind, the reception desk takes the cake for coolest desk of all time. It does feel like an executive desk, but with really great proportions and materials.”

The previous desk was bulky, built-in, and uninspiring, but the designer had a vision to completely transform the space. Pulling inspiration from the Los Angeles offices, she was able to re-create the same identity while giving the space a true Manhattan edge. “The large black-and-white artwork that was sourced from CMG was the inspiration behind the whole room. The black carpet was honestly scary to me at first, but I started thinking of it more like a painted black floor and choosing pieces that would pop against it—rather than pretend like it wasn’t there.”

Walking into the CMG offices today feels exactly as it should: striking, ahead of the curve, and—most importantly—welcoming. People congregate in the lobby on the oversize tan leather sofa, the reception is aglow from the soft accent lighting, and the expansive views of the Manhattan skyline are reflected in strategically positioned mirrors.

Next up: Step inside our striking MyDomaine office in Los Angeles. 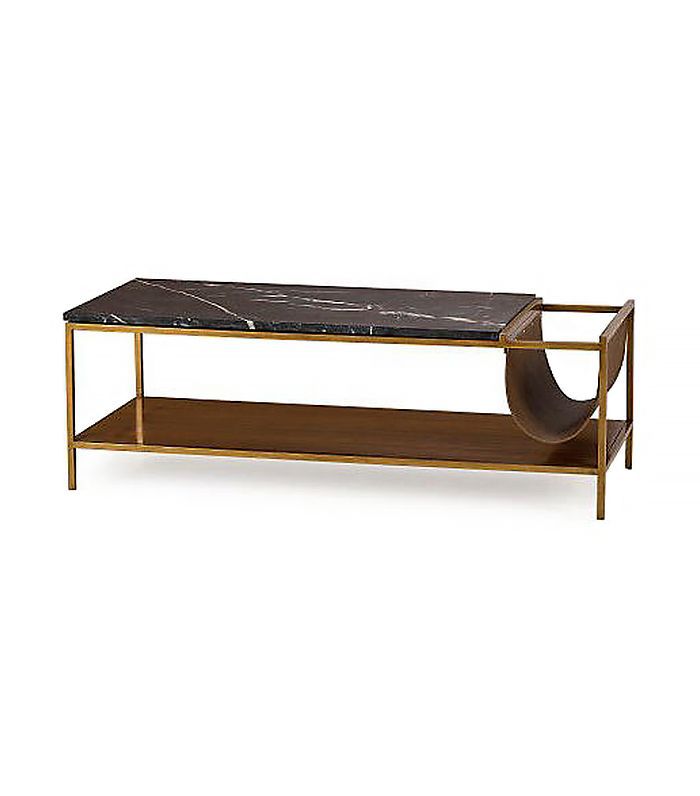