How to Grow Orchid Plants

Few flowering houseplants are as beautiful as orchids—and few have as much of a reputation for being difficult to grow. However, many common varieties are relatively simple to maintain. Even beginning home gardeners can make them bloom and thrive. Note that orchids are very slow-growing.

There are thousands of orchid species and hybrids, but two genera are the most popular: phalaenopsis hybrids (also known as moth orchids, which have wide leaves at the bottom and long stems topped by pink, white, yellow, or purple blooms) and dendrobium hybrids (also called cane orchids, which bear several flowers along leafy, upright canes). They're both so gorgeous that, if you can't decide which feels more like you, just get both. You really can't go wrong.

Plan to water your orchid once a week, checking the soil frequently until you have a good idea of your orchid’s water needs. Allow the soil to somewhat dry out between waterings.

Orchids that are grown indoors benefit from additional humidity. The best way to give them this is to put a humidifying tray underneath. Cover the bottom of a shallow tray with a layer of small pebbles, and then add water to just below the tops of the pebbles. Place the plant on top, making sure that the bottom of the pot isn’t touching the surface of the water. The water will slowly evaporate, adding moisture to the air around your plant.

Fertilize your orchids once a week using a balanced houseplant fertilizer diluted to quarter-strength. When your orchid has flowered and the blooms then fall, this is normal—don't think you've mistreated the plant or that it's dead or dying. It will take time to bloom again. Some people choose to place orchids out of sight on a patio or deck when not in bloom. You can also attach the orchid plant to a fence or tree, and it will bloom again when ready.

In fact, orchids have an extraordinarily long life span—up to 100 years or more—sometimes outliving their owners. Orchid enthusiasts have been known to leave their prized orchids to others in their wills.

Most orchids are epiphytes, meaning that, in the wild, they grow on the woody surfaces of other plants. Like air plants, bromeliads, ferns, and other epiphytes, orchids absorb nutrients and moisture from the air through their roots. That said, they are not parasites.

Use a growing medium specially formulated for orchids instead of regular potting soil, which can kill your plant. Orchid mixes are very well-draining, and typically include chunky ingredients like tree bark or lava rocks to create the air pockets the roots need to thrive.

Use a clear plastic pot to monitor both the soil moisture and root growth of your orchid plant.

Orchids grow best with bright, indirect light, so try placing your plant near a south-facing or east-facing window. Dark green leaves are a sign that you should move the plant closer to the window, while medium green leaves indicate adequate light.

Phalaenopsis orchids prefer warmer temperatures, but others can withstand temperatures down to 50 degrees or 60 degrees. Overall, though, orchids don't do well at temperatures above 90 degrees and don't like cold drafts or blasts of heat. As for watering needs, if you notice roots looking dark and mushy, you are overwatering, whereas dry, thin, or yellowing leaves indicates underwatering.

As mentioned, there are many types of orchids. In fact, orchids are one of the largest of all plant families. Here are a few of our favorite varieties that make for great houseplants.

Phalaenopsis orchids are ideal for new plant parents because they don't require too much attention. They bloom into colorful flowers on and off throughout the year. The flowers of the Brassavola orchid are usually white and sometimes a minty green. Their most distinguishing feature is that they're quite fragrant flowers. Cattleya orchids have been bred and rebred so many times that there are countless different varieties of them. You've probably seen cattleya orchids on corsages because they're so beautiful, with their freckles and streaks.

How to Propagate Your Orchid Plant

The simplest way to propagate dendrobium orchids is to divide a mature plant into two smaller plants. Dendrobium orchids with at least four healthy canes can be divided. Phalaenopsis orchids cannot be divided. They must be propagated by removing keiki, baby plants that can appear on a flower spike.

How to Propagate Dendrobium Orchids

Step 1: Remove your orchid from its pot. Use your hands to gently loosen the roots and remove the growing medium.

Step 2: Using sterilized garden shears, make a clean cut through the center of the rhizome. You will have to cut through some roots as well, but try to keep them intact as much as you can. Cut off any dead or dangling roots.

Step 3: Place one division in a new pot. Choose a pot with about an inch of space around the root ball so that the roots have somewhere to grow into.

Step 4: Fill the space around the root ball with fresh orchid bark or growing medium, pressing it down firmly with your hands. The spot where the root and stem meet should be covered by half an inch. Pack the medium tightly enough around the roots so that picking up the plant by its leaves also lifts the root ball and container. Repeat with the other division.

Step 5: Place divisions in a warm place with bright, indirect light. Water one week after dividing, and then care for them as usual.

How to Propagate Phalaenopsis Orchids

Look for keikis to grow from nodes on the flower stem of your Phalaenopsis orchid. They will be small plants with their own roots and leaves. Dendrobium orchids may also grow keikis along or at the top of the cane, which can be removed and replanted using this method.

Step 1: Allow the keiki on the mother plant to grow leaves and roots a few inches long.

Step 2: Using sterilized shears, cut the stem or cane a couple of inches above and below the spot where the keiki is growing. Apply a fungicide, such as cinnamon, to the cut areas to prevent diseases from growing.

Step 3: Plant the keiki in a small pot using sphagnum moss, first putting some moss in the container and then wrapping moss around the keiki's roots.

Step 4: Keep the keiki in a spot with less light than you usually would for orchids, gradually moving it closer to a source of bright, indirect light. Once you see new growth, you can begin to fertilize and care for it as usual, eventually repotting with regular orchid mix. New orchid plants should begin to flower in two years or so with proper care.

As mentioned, orchids (including habenarias, pecteiluls radiata, subrosa, and aurata) are known for being high maintenance and can be a little tricky to care for, needing just the right amount of water, light, and humidity. The good news is that they are pretty good at communicating what they do and don't like.

Drooping, wrinkly leaves is a sign that your plant is receiving too much or too little water—you'll need to inspect the roots to find out which. Brown, mushy roots (a.k.a. root rot) mean you've been overwatering, while gray, shriveled roots indicate underwatering. Either way, you'll want to remove all dead or soft roots and repot.

To encourage new root growth, don't water your orchid for several days, but do increase the humidity levels around the plant. Resume normal watering after about 10 days.

If your orchid's foliage is changing color, this usually indicates an issue with lighting conditions. Dark leaf spots typically mean your orchid wants more light, while yellowing leaves mean it's actually receiving too much light.

Bud blast is the common term for when your orchid buds are turning yellow and shriveling before they ever even bloom. This one's harder to diagnose, as it can be caused by many environmental issues. Most commonly, your plant isn't getting enough light or enough humidity. However, this could be caused by over or underwatering, too.

Another problem you may run into is pests—specifically spider mites and mealybugs, which are attracted to the blooms. Like overwatering, pests are easy to overcome. All you need is an insecticide that clears away any infestations.

How to Debug Plants Before Bringing Them Indoors for Winter

Potting and Repotting Your Orchid Plant

There are a couple of telltale signs when it's time to repot your orchid. First, if the roots are very tightly tangled (not loosely tangled, though, as this is normal) and popping out of the pot, it's definitely time to repot. Second, if your potting media has begun to break down from medium-sized chunks into smaller pieces and maybe even begins to emit an odor, this is another sign.

While you probably won't need to repot your orchid every year, you'll want to at least replace the soil every spring to provide your plant with the nutrients and air circulation it needs.

Plan to repot your plant at least every three years or so, transferring it to a container one size larger. You may want to use an orchid pot to allow the roots to get more air, which has holes, slits, or other openings in the sides to allow better airflow to the plant’s roots. 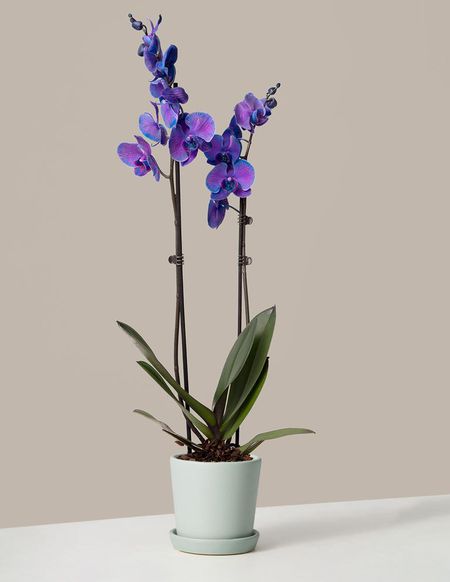 How to Get Orchids to Bloom

So, you've managed to keep your orchid plant alive and it seems happy, but now how do you get it to bloom (or rebloom)? After all, you probably didn't adopt it to stare at its leaves, beautiful as they are.

Assuming you're providing proper care, the biggest requirement for your plant to produce flowers is plenty of bright, indirect light, but never direct sunlight. If this isn't something you have ample amounts of in your home, you may need to invest in a grow light with a timer to simulate the sun's natural cycle.

Orchids also like to experience a temperature difference from day to night. If possible, drop the temperature around your plant by about 10 degrees at night to trigger blooming. If you're still not having luck getting your orchid to produce flowers, you may need to provide a nutrient boost with an orchid-appropriate fertilizer.

Are orchid plants easy to care for?

The most common types of orchids—phalaenopsis and dendrobium—are fairly easy to care for if you're patient and consistent. We'd recommend beginners start with one orchid plant and try to keep it happy for a while before investing in more or graduating to a pickier variety.

How often do orchids bloom?

Depending on the variety, most orchids will bloom at least once a year. Though, if your plant is really happy, it may bloom two or even three times a year. With the right care, these blooms can last anywhere from six to ten weeks.

How long can orchid plants live?

As always, this will depend on your exact conditions, but orchids are generally a long-lasting species. While experienced gardeners find their plants can thrive for 15 to 20 years, some orchids have been known to live for 100-plus years.

14 Colorful Indoor Houseplants That Will Brighten Up Your Home