When It Comes to Parenting, Paris and New York Could Not Be More Different

From their iconic fashion sense to their inimitable décor style (and delicious cuisine), the French are admired the world over. So how did they grow up to be so impossibly chic? Turns out, they were raised that way. Intrigued? Thankfully, best friends Florence Mars (U.S. president of high-end French children's fashion line Bonpoint) and Pauline Lévêque (a journalist turned illustrator) joined forces to highlight the many differences between New York and French parenting styles in their illustrated book, Say Bonjour to the Lady: Parenting From Paris to New York.

In this playful and hilarious tongue-in-cheek guide, Mars (who stands by her traditional French upbringing) outlines how a French child would behave in various situations from dinner to play dates while Lévêque offers the New York version. While French children are well-behaved and stylish, American children are self-confident and creative. The end result is a comedic and satirical look at the extreme parenting approaches of both while celebrating their differences.

Despite the contrast in upbringing, Mars and Lévêque agree that the secret to raising the next generation is in the combination of both styles. Ahead, we asked the friends to share a few of the key differences between Paris and New York parenting, from dress sense to table manners and everything in between.

MYDOMAINE: What prompted you both to write this book?

FLORENCE MARS: Pauline and I met ages ago in Paris. We were both working in the TV business. We lost touch for a while and then met by complete chance on the sidewalk in the West Village one month after I moved to the city. Since we moved to the U.S. seven years ago, I kept a journal of all the things that surprised me, I really have been observing the locals with great attention.

Arriving in New York, it came as a complete shock how different Parisians and New Yorkers really are. As a mother of three and as the boss of Bonpoint in the U.S., I have had a lot to observe around parenting issues, and I thought it would be interesting to do a book about all those little differences. It was very natural to ask Pauline to join the fun, as she is not only a very good friend and a mother but also a very talented illustrator.

MD: When it comes to parenting, what are Parisians and New Yorkers doing differently?

FM: The French way is all about respecting rules, tons of rules, doing things very much comme il faut (the way it should be). And the American way is definitely about making sure your kids are comfortable, something that we really do not care so much about in Paris! The French children are very chic but American more at ease. Our kids will be able to behave very well in a restaurant at age 6, but yours will be able to give a speech in public at this age.

MD: While the book highlights the differences it's also very tongue-in-cheek. What do you hope people take away from reading this book?

PAULINE LÉVÊQUE: We hope to make people smile. And not only French parents! Education is such a big deal here in America; it is borderline hysterical. French mothers are way too strict, and Americans probably too cool. The truth is probably somewhere in the middle.

MD: What are the differences in eating habits between Parisian and New York children?

FM: Concerning food, there are many rules in France and pretty much none in America. For instance zero snacking between breakfast and lunch in Paris, no juices with the meal (except maybe for your child's birthday!), no pizza or potato chips after school, and above all, we all have to sit together for dinner starting at age 3 average. In NYC, my American friends provide a snack open bar pretty much 24-7 and juice boxes any time of the day.

MD: What are the differences in discipline for Parisian and New York children?

FM: Kids in France are supposed to be extremely respectful to adults. Very polite. They should never ask for something without a s'il vous plait (if you please), and merci is probably the most important word in their vocabulary. In New York, parents want their kids to be at ease and call the adult by their name; it is all about making the child feel comfortable. In Paris, we want our kids to be well behaved (especially at the table, because as you probably know, French people do not joke around food), so we teach them, pretty much since day one, to be quiet during the meal, to sit still, and to not interrupt the adults.

MD: How would you describe the upbringing of a French child? An American child?

MD: What does a Parisian child eat for breakfast (on average)?

FM: Sorry to disappoint, but pretty much the same as an American kid! A bowl of cereal with milk or tartines with jam? But on the weekends, it is croissants and pain au chocolat. We don't do eggs and bacon in the morning; we keep it very simple.

"It is very important to us to have well-dressed children, and most of my French friends would rather die than let their children go out in sweatpants if they don't have P.E."

MD: Parisians are very stylish people. How does this filter down to their children?

FM: We educate the children to the French aesthetic at a very young age. Kids do not choose their outfits until a little later in life (in New York, my friends negotiate with their 3-year-old girls which is incredible to me), and if they do attempt to wear striped leggings with a flowery dress and sneakers, it will simply be out of the question.

It is very important to us to have well-dressed children, and most of my French friends would rather die than let their children go out in sweatpants if they don't have P.E.!

When the kids, especially girls, are a bit older, the mothers will teach the basics: no miniskirt with heels, no white socks in black leather shoes, no Crocs whatever the occasion is.

MD: What are the main differences in how Parisian and American children are taught to greet others?

FM: I think there is an international agreement here: Children need to say hello and look people in the eyes.

In Paris, we ask kids to say "Bonjour, madame" or "Bonjour, monsieur" when they reach 4 or 5 years old. It shows respect to adults and puts a little distance between the kids and them. Here it seems that pretty much any greetings goes: Hey, hi, yo…

Also, we ask the kids to do la bise on both cheeks to adults in the family and friends circle—not to strangers though—at a very young age. But we almost never hug.

"The French way is all about respecting rules, tons of rules, doing things very much comme il faut (the way it should be). And the American way is definitely about making sure your kids are comfortable; something that we really do not care so much about in Paris!"

MD: How do children's table manners differ between Parisian and New York?

FM: Table manners are pretty intense in Paris. Dinner is a big deal. It is every night around the table. We cook. Nobody is fooling around. We share food and conversation. All the rules for la table are no jokes in our house. Chew with your mouth closed, do not speak while your mouth is full, sit straight, and no elbows on the table. Both hands on the table is perfect and the feet on the ground. And never, ever put your shoes on the chair.

MD: What are the main differences in schooling between Paris and New York?

PL: In New York, education is supposed to make the child feel very confident, so everything they do is acknowledge with a huge amount of enthusiasm. It is basically the exact opposite in Paris, where teachers are almost never satisfied or at least will never show it. You need to do better pretty much all the time. Even if you are a very good student, you can improve and aim for excellence.

MD: What are some of the things Parisian moms do differently with their newborns compared to New York? Why?

FM: Breastfeeding is an option, not a big deal at all. It is up to the mother, and I don't think people will judge you if you decide to not try it. If you choose to breastfeed, you can do it without hiding the baby and boob under a big scarf. It is considered very cute to see a bit of flesh.

We also let the baby cry before running to their bed. And at three months, they are expected to be sleeping at night.

If you want to read more, then shop the gorgeous illustrated book below: 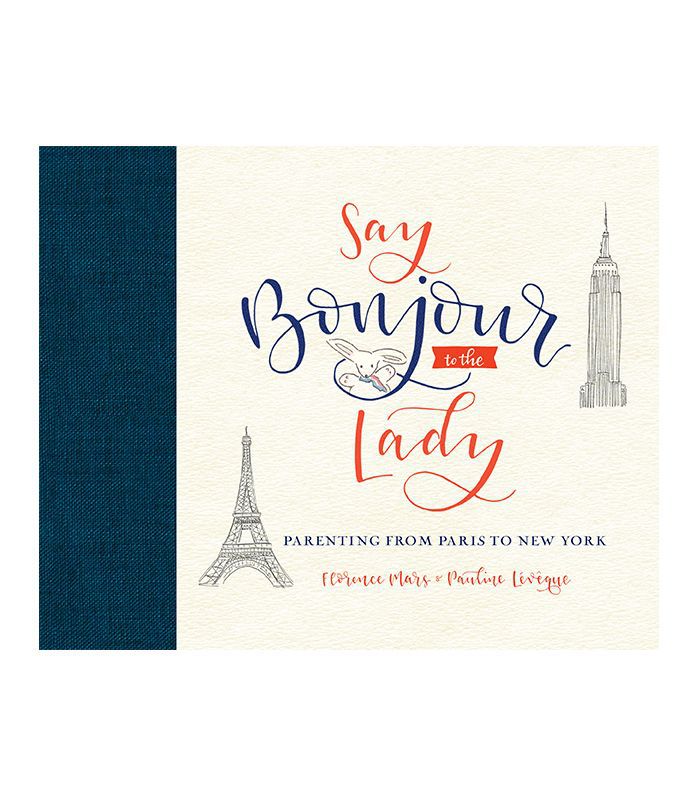 What differences have you noticed in parenting styles outside of the U.S.?