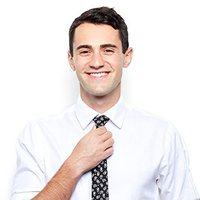 Peter Dolkas
Peter Dolkas is an interior designer and stylist. He was the Market Editor at MyDomaine from 2013 to 2014. He currently resides in New York, where he's a designer and project manager at multi-disciplinary design firm Billy Cotton.
MyDomaine's Editorial Guidelines

Throw pillows are pretty much like potato chips: We betcha can't have just one. They're nest-feathering personified—and they can make or break any space.

Besides being versatile (and beautiful), throw pillows should, above all, be constructed with the highest quality fabrics and inserts to ensure they look fresh through the years—and remain comfortable enough for a spontaneous catnap. Interior designers certainly recognize this; textiles classes are part of the core curriculum of any design school. And if a magazine-worthy room is what you're after, luxury throw pillows will help get you there.

It's high time you stop rifling through those tired cushions at the big-box stores and start shopping where the pros do; many trade-only companies now offer unadulterated access to their fabrics, so anyone can buy. Here are 15 of the best places to buy throw pillows online, from the vendors interior designers return to time and again.

Known best for his dazzling array of block-printed fabrics and textiles from India, the well-traveled, Pratt Institute-educated John Robshaw began selling his block prints in 2002, out of a tiny Manhattan studio. His aha moment came when he realized clients were often more interested in the interesting bolts of fabric he had lying around. Today, Robshaw's robust business has blossomed into vintage offerings, upholstered furniture, rugs, and sleepwear, and he currently releases 50 to 70 new prints every season.

His prints are painterly interpretations of traditional block-printing techniques developed in far-flung countries like India, Java, Thailand, and the Philippines, and Robshaw has gone beyond his signature prints to offer throw pillows that run the gamut from densely woven to hand-painted and embroidered.

Ever been discouraged when you find out that pillow in your favorite design mag is offered only to the trade? Arianna Belle's your answer. What was once a design blog authored by Arianna Vargas morphed into an online pillow shop in late 2011. Each of Belle's luxury throw pillows is made-to-order in Vargas' LA studio by a small team of seamstresses who hand-cut and sew every last detail.

Most of the pillows in its regular collection can be produced in any standard size and shape—from lumbar to euro square—and the company will even send digital mockups for preapproval.

If prints aren't your thing, Belle also has an impressive selection of solid velvet fabrics in nearly every color one could imagine.

With a work resume steeped in fashion design, Alexandra D. Foster switched gears to offer a line of luxury cushions in 2013. If you've always been a sucker for Italian craftsmanship, then you're in luck. Each of Foster's silk accent pillows (both fronts and backs) are printed and hand-sewn in a prestigious silk mill in northern Italy’s Lake Como region.

Braided trim, too, is handmade by passementerie artisans in Bologna. We covet Foster's worldly motifs and bold color combos.

LA-based interior designer Amber Lewis started out by blogging about the journey of owning her first home. After that, the design opportunities just kept coming—and she parlayed her love of found and vintage items into an online store, Shoppe Amber Interiors, offering pieces akin to her signature easy-breezy "California Eclectic" aesthetic. Her linen throw pillows are mostly neutral (with texture, of course), and they're exactly what you'd expect: at once, sophisticated and relaxed.

Square Feathers certainly had humble beginnings: Rob McIntyre bootstrapped his handmade pillow business in 2008, sewing his throw pillows out of his garage in Austin, Texas and then selling them out of the trunk of his car. Today, McIntyre's pillow business, still headquartered in Austin, has expanded to offer furniture, artwork, and home decor—and he still designs every last made-to-order piece.

All throw pillows are hand-cut and sewn on-site and include 95/5 (meaning 95% and 5% feather/down inserts). The company's Briar collection of leather pillows are, undoubtedly, the next must-have home accessory.

Sisters Tania Armstrong and Tamara Kleidermacher founded Chloe & Olive (named for their two dogs) back in late 2010. Sick of seeing all the lackluster yet ultra-expensive throw pillows offered by department stores, they put up their first capsule collection of dual-sided pillow covers on Etsy.

Since then, they've expanded their business to offer many more of their signature hand-cut and -sewn covers (in different but complementary designer fabrics) as well as an impressive array of inserts available in virtually any standard size, in several combinations of down/feather fills.

Everybody's favorite Swedish fast-fashion retailer came out with an uber-affordable home collection in 2010. Mostly, H&M Home offers covers sans inserts, so you can feel good about stuffing them with high-quality fillers. Their fun, on-trend offerings are perfect in a pinch—or for those with uber-tight home decor budgets.

Careful though: As soon as you see something you like, buy it. H&M moves its home goods almost as fast as it moved its 2018 Moschino collab.

Maven Collection was launched in 2013 and borne of founder Laura Hebden's entrepreneurial spirit, extensive world travels, and socially conscious philosophy. Her ethically-sourced handmade offerings like rugs, baskets, tabletop items, and blankets hail from countries such as Peru, Morocco, and Zimbabwe (among others), where age-old artisanal traditions are kept well alive. And the company's one-of-a-kind throw pillows (with down inserts) are no exception; of particular note is its decent array of Moroccan Sabra agave-silk pillows.

In late-2008, Central Saint Martins grad Shanan Campanaro launched the textile design firm, Eskayel, inspired by her love of travel and the natural world. Each of the company's watery, kaleidoscopic prints is first painted by Campanaro herself (based on photos taken while traveling), and then digitally printed onto denim, cotton, and linen fabrics used to make the company's wildly popular throw pillows.

Everything Eskayel produces (including its rugs, wallpaper, furniture, and accessories) is made to order, eschewing a sizeable carbon footprint that further bolsters the company's dedication to eco-friendliness; its fabrics are organic and printed with water-based inks that produce no runoff.

Janet Kain For The Home

Janet Kain's self-described "Urban Coastal" aesthetic is anything but neutral or bland. In fact, she has bucked such concepts since starting her eponymous brand in 2008, with co-founder Sarin Bachmann. Every pillow is hand-sewn and stuffed—with the same fabric on the back and front—and filled with 90/10 feathers and down.

Most accent pillows are sold in 22, 23 and 24-inch squares (save for a long lumbar pillow here and there) and feature bold, whimsical fabrics represented by Quadrille (including China Seas, Alan Campbell, and Suncloth)—brands the average Joe wouldn't normally have access to.

Since its inception in 2009, co-founders Alison Pincus and Susan Feldman may no longer be at the helm, but they sure helped catapult the New York City-based One Kings Lane into a home furnishings juggernaut. While it isn't a huge department store, per se, it does employ a huge team of buyers (like Bloomie's) traveling the globe—and all of the important flea markets—in search of one-of-a-kind vintage items, pre-loved heirlooms, upholstered furniture, and original artwork.

Perhaps unsurprisingly, its decorative pillow offerings are well-stocked; they also run the gamut insofar as pricetags. Online, search by color, price, designer, size, and condition (new or vintage) to drill down its nice selection.

We see you rolling your eyes. This iconic Italian fashion label is already synonymous with style, edge, and sophistication. So why not embrace Gucci's home decor offerings, too? In 2017, under the trained eye of its creative director, Alessandro Michele, the brand launched Gucci Décor, a line of throw pillows, trays, tables, chairs, kitchen canisters, and other non-sequitur-style things that utilized prints, patterns, and graphics seen in its previously released fashion collections.

And yes, it's still as molto-costoso (aka super-expensive) to Guccify your pad as it is your body. But Gucci's tasseled velvet-and-moiré cushions are everything—and we can't fathom them ever going out of style.

In 2010 Willia Skye Home was launched via Etsy. The Costa Mesa, California-based company, owned by Kristie Thinnes, mainly sells customizable throw pillow covers in standard sizes (with backs identical to the fronts) in high-end designer fabrics such as Schumacher.

And if the company doesn't carry exactly what you want online—whether you're after braided cording, tassels, or another size—just ping them; they'll gladly accommodate you. Although the brand doesn't stock pillow inserts, it does offer a few handy pointers on proper sizing—and will also help you with sourcing. We particularly love the brand's Colorblock and Glisten velvet options.

PillowFever is the Etsy-based business of Kseniya Allen, from Beach Haven, New Jersey. She began selling her decorative pillows back in 2014 and since then, her prices have remained accessible—and her high-end fabric choices superb.

From Scalamandré to Thibaut, fringe to tassels, and chinoiserie to ombré, each handmade fabric pillow can be purchased with or without an insert and can even be constructed with piping, at your request. PillowFever is perhaps, the luxury throw pillow world's best-kept secret.

Christina Bryant is a gal with a taste for all things global. In 2012 she founded the modern bohemian-leaning St. Frank (named for St. Francis of Assisi, who dedicated his life to helping the poor) with the intention of bringing expertly crafted, ethically sourced, and authentic products with backstories—all representative of her millennial values—to the masses.

Just as St. Frank's global luxury offerings are produced by expert craftspeople practicing for generations, so too, is its selection of one-of-a-kind throw pillows. Counting us among them. the brand's fans also include Nate Berkus (and Oprah, natch).

Co-founded by DwellStudio founder (and Wayfair's former chief creative officer), Christiane Lemieux, The Inside produces affordable, quality pieces by offering a direct conduit between designer and consumer; the company holds no inventory and everything is made from scratch, on-demand.

With more than 100 exciting designer fabrics in glorious patterns (think: Scalamandré's Zebra and Clare V's Blue Lotus) to sink your teeth into—and with a proprietary selection you won't see elsewhere—The Inside's throw pillows always look fresh and modern. They come in three sizes (lumbar, and 16-inch and 20-inch squares) for indoor as well as outdoor applications.