Learn How to Grow a Sesame Plant—and Yes, You Can Eat the Seeds 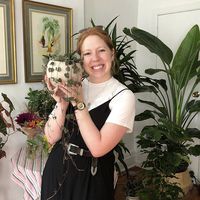 Katherine (Katie) Pittman is a décor and plant expert for MyDomaine. She has over five years experience working in the lifestyle, fashion, and beauty space. Previously, she was the executive assistant to the editor-in-chief of O, The Oprah Magazine. Her work appears in Byrdie, O, The Oprah Magazine, OprahMag.com, and other publications.

Chances are, you've eaten the seeds from a sesame plant—but you may have never seen the actual plant itself. We use the seeds to make things like tahini and everything bagel seasoning (come on, we all love it), but how does it actually grow?

Sesame plants produce tiny seed pods, where hundreds of seeds hide inside. It's one of the oldest cultivated crops known to man and is considered an oilseed crop due to its high oil content.

The plant is native to Africa and India, where the hot and dry conditions are ideal for growing. Because of the conditions the plant needs to thrive, it can be difficult to grow at home, but we're here to help. Read on to learn everything you need to know about growing your very own sesame plant.

While the sesame plant can grow in rather poor conditions, that doesn't mean they will produce many seeds when they're lacking the right light, water, and soil. To ensure you get the most out of your sesame plant, try to mimic the conditions it would have in its native habitat.

Because the plant is native to India and Africa, it likes a lot of sun. Place it somewhere where it will get plenty of direct light and heat, as it doesn't do well in colder temperatures. If you keep your plant outside in the summer, be sure to bring it in during colder weather.

Soil is also part of making sure your plant thrives. Be sure to have a mix that drains well, and add some sand to your mix if you have to. A sesame plant won't tolerate sitting in wet soil for long, and you're more likely to see the plant die if it does.

But, on the bright side, if you only have a potting mix from your local hardware store, sesame plants don't need a ton of water. Always water a little less than you think you need to to avoid root rot and drowning the plant. On that note, this plant doesn't really love humidity either, so it's great for hot, sunny places.

We can't say it enough: Sesame plants love hot, dry climates, so it's best to try and create that as best as you can. Place your plant somewhere where it will get a ton of light and warmth, like a south-facing window, and don't overwater it. Loamy, sandy soil is best, but it'll survive in potting soil or a similar medium.

If you're growing a sesame plant from seed, it's best to keep it indoors for a few weeks before moving it outside. It'll need a little extra TLC when it's first growing and establishing its root system. While the seed is germinating, it also needs a more water than an established plant, so mist the soil regularly until you feel the plant is strong enough.

The ideal temperature for a sesame plant is between 68 and 75 degrees, similar to what it is inside most houses. If you're lucky enough to have that kind of weather year-round outdoors, the sesame plant would be a perfect addition to your garden!

How to Propagate Your Sesame Plant

Sesame plants grow from seed, so you're really only "propagating" them by growing more plants from the seeds you harvest from a mother plant. Don't plant seeds deep into your soil, or else they won't be able to grow.

When a sesame seed is planted, it takes around four to six weeks to germinate, during which you can keep the soil pretty moist. Afterward, when the plant is more mature, it will tolerate drier soil. Be sure to keep your plant indoors until the frost season is well past, though, as this plant is not one for being out in the cold.

Once you have your own mature plant, you can harvest the seed pods, let them dry, and remove the seeds from the pod.

While the sesame plant is pretty resilient, it does fall victim to a few things. First, root rot. You want to make sure your plant is never, ever sitting in water, or else it won't make it long. Using a well-draining soil and putting it in a porous pot (like terracotta) will allow the soil to dry out more easily.

Sesame plants are also prone to bacterial leaf spot, which will leave black edges on the leaves of the plant. Because this is a bacteria, it's hard to prevent, but thankfully, sesame plants are so hardy that they often bounce back or don't get leaf spot if not kept near other plants that may have it.

Until your sesame plant has a well-established root system, it's best to keep it in a smaller pot. If you're growing multiple plants, you could even plant seeds in an old egg carton or small nursery pot. Once the plant grows larger, you can move it to a pot no more than two inches larger in diameter than the current pot it's in, as a larger pot could shock the plant.