Things to Do in Bali: Where to Eat, Sleep, and Watch Sunsets

written by
Sharon Yi
Sharon Yi is a beauty and wellness editor with almost a decade of experience, who has written for Total Beauty, Refinery29, Byrdie, and Condé Nast.
MyDomaine's Editorial Guidelines
Sharon Yi

If you’ve heard anyone describe their trip to Bali, the word that consistently tops their reviews above “amazing,” “awesome,” and “beautiful” (though it is all those things) is “magical.” In the wake of Eat, Pray, Love, this small Indonesian island has become a destination for those in search of untarnished views of rice paddies, spiritual healing, beachside luxuries, and Brooklyn-approved eateries at a fraction of the cost.

But for those of us who live in the western hemisphere, or to put it more pointedly, the eastern coast of the western hemisphere, Bali is one of those destinations that seems a tad out of reach. Like when you hear of travels to Bora Bora, Australia, or South Africa. Sure, I’d like to see the kangaroos as much as the next person, but is it really worth the 21-hour flight that leaves you feeling jet-lagged for a week? As it turns out, it is. Here’s why.

Let’s start with the luxuries. On vacation, you want to treat yourself, but it’s not so fun once you get the bill. In Bali, though, the luxuries are overflowing at a fraction of their cost in the States. If there’s one resort that tops the list for opulence at every turn, it’s The Mulia, Mulia Resort & Villas.

In Bali, you get Gucci at a Zara price. In numbers: You can stay in your own private villa, replete with a medium-size pool, a deck, an outdoor rain shower, and a personal butler for $650 USD a night. Accommodations like this in the States would easily run up to $2000.

And even if you were to pay more for the same accommodations in the States, the type of service and sweet attention to detail would still be unparalleled. Every interaction is personal and cheerful; seeing how tourism has overtaken agriculture as the single largest industry in Bali, hospitality isn’t taken lightly here.

Where once the land was covered in rice paddies, farmland has given way to five-star resorts, fine dining that can rival any Michelin-starred spot, and cool boho boutiques run by Aussie expats. A whole Western society has sprung up in the middle of Ubud, Canggu, and Seminyak. After a week of exploring the southern island, seeing the juxtaposition of a Hindu temple sharing a wall with a four-star resort, or a rice paddy appearing between upscale cafés, I started to understand why the land was regularly described as magical.

It’s rare to experience such rapid commercialization without losing the cultural heritage of the indigenous people, yet in Bali, due to being deeply and homogeneously Hindu (second only to India), the daily offerings at business entrances, gigantic handmade coconut leaf decorations dotting the streets for the Galungan festival, and umbrellas propped to give stone gods some relief from the sun are all active reminders of a Balinese culture still alive and well.

As a frequent flyer and a penny-pincher, I’ve only been lucky enough to fly first class twice in my life (and one of them was a free upgrade), so hear me out when I say this: Spend your money on the flight. Upon landing in Bali, your expenses will be nominal. That’s why, for the seasoned traveler who understands that the journey is just as much a factor to your vacation as the destination (and for anybody above the age of 29 with bad knees), I’d recommend the upgrade. I loved my flight with Cathay Pacific—even its premium economy seats, with an extendable footrest and gratis Cup of Noodles, went a long way during the 15-hour flight. 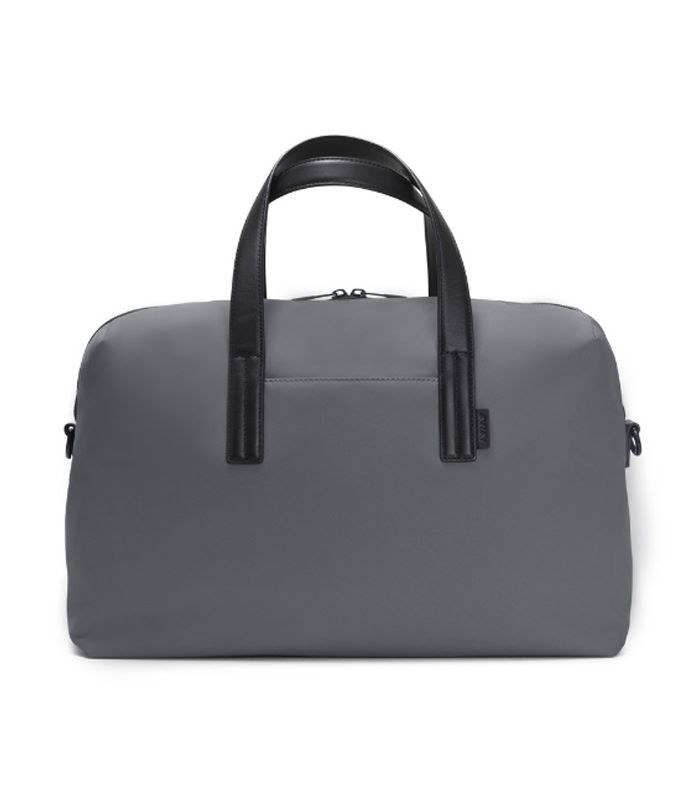 Away The Everywhere Bag $195
Shop

If you’re not staying at a resort or a hotel that has complimentary taxi services, do yourself a favor and book a daily driver for your stay who will usher you in an air-conditioned car and help plan your itinerary. A driver for a 10-hour day will cost you approximately $50—the price of a 30-minute cab ride from JFK to Manhattan. We used a company called Bali Made Tour and had the same driver every day, which my introverted husband and I particularly appreciated.

Another popular tourist and expat mode of transportation is to rent a moped or motorbike; they’re ubiquitous and incredibly cheap (think $3 to $6 USD a day). But keep in mind that in Bali, there are minimal traffic signals and nonverbal speed etiquette, and they drive on the left side of the road. The traffic in tourist areas like Ubud can rival Manhattan’s but with way more motorbikes.

So unless you’re hunkering down in one location for a while and using your motorbike to scoot a few blocks to the beach and back, I wouldn’t recommend it. Traffic accidents are the single largest cause of death in Indonesia, with three fatal accidents every day—often involving inexperienced tourist bikers. Make with that what you will, but don’t say I didn’t warn you.

Folk Pool and Garden: Now this is a vacation. Think a Vegas day club but built for 40 people with chic boho-inspired poolside tents your inner child dreamed about. With its swim-up bar and a delicious sprawling menu, spending a whole day at this calm pool club is worth the time.

Luwak Coffee Plantation: There are multiple coffee plantations that you can visit, but all of them should end with an expansive complimentary tasting of their teas and coffees. The Luwak coffee is the one to beat though. Made from the digested coffee beans of the luwak’s (the Asian palm civet) intestines, this “poop coffee” is aptly named and pungently strong. Buy a bag for the coffee aficionados who would be ever grateful.

The Nasi Goreng, a chicken-fried rice topped with a fried egg that you can then happily mix with sambal matah—the island’s premier salsa (so good).

All the fruit. Due to the volcanic ash in the soil, the tropical fruits are second to none and comparable to Hawaii. Get a plate of guava with lime squeezed on top.

Iced ginger tea. The best after a $30 one-hour massage.

Bintang Radler. Bintang beer is the local Indonesian beer, akin to a pale lager, and its Radler flavors in lemon and orange are perfectly refreshing.

Skip cocktails. The Balinese don’t have a drinking culture thanks to their religious lifestyle and a heavy government tax on alcohol. Therefore, the drinks are priced comparable to those in New York without the equivalent pour. That said, there isn’t a need to get bent when you’re in a place like this.

Bali is a home décor enthusiast’s dream. Every restaurant is chicly decorated in trendy wicker and rattan chandeliers that IKEA would steal in a heartbeat. The towns of Seminyak and Canggu are dotted with décor boutiques run by rising Aussie designers. I once yelled for our driver to please stop so that I could run back a block to a décor store that was just too pretty to pass by. (It was called Natural if anyone is interested!) Suffice to say: Bring an empty suitcase.

And there’s something for the fashion fiends too: Cult Gaia’s iconic bamboo ark bags are everywhere for a few U.S. dollars (in a range of shapes and colors), while the Instagram-friendly circular raffia crossbody bag that regularly goes for $50 to $100 can be haggled down to $10 in the open-air markets.

The Ubud Traditional Art Market is the largest one, overflowing with tourist tchotchkes. Outside of scoring some fantastic rattan tote bags and black wicker placemats, I’d spend most of your time outside of the open-air market in the brick-and-mortar stores or searching for the artisan boutiques that can be found in the hip winding alleyways of Ubud. I bought three rattan bags within 10 minutes of entering one such store and a handsome carry-on-size duffel in handmade leather for approximately $100 (easily would run for $500+ in the States) in another.

For these nondescript boutiques, start your afternoon of shopping at the hip vegetarian restaurant Kismet and then work your way down.

WHAT YOU CAN'T MISS

Tegalalang Bali: You’ve seen these iconic rice terraces in pictures—gigantic ledges of rice paddies rising from a valley, where tourist-serving cafés and marts have been carved into one side like the Balinese Cinque Terre, and palm trees grow on the other. There are the usual tourist trappings with raised nests and slingshot-esque swings made for Instagram that admittedly I could not resist.

Tirta Empul Temple: Even if you don’t believe in the healing powers of the bubbling springs whose source, locals say, is unknown, it’s still a stunning sight to behold. The temple itself is gorgeous with its gilded peaks backdropped by an unbridled lush forest, and a koi pond worth a look.

Monkey Forest: Swing by the Monkey Forest afterward for an afternoon spent with monkeys on the loose. Walking into this beautifully designed stone playground, you quickly come to understand that you’re on their turf now. If a monkey wants something, don’t fight it, give in. They’re not averse to grabbing and pulling your hair, opening your backpacks, or stealing sunglasses for ransom. Keep your belongings in the car, tread carefully, and do not look directly into their eyes—a mistake I made regrettably.

Other notable scenes if you have the time: Garuda Wisnu Kencana Cultural Park, Campuhan Hill, and Sekumpul Waterfall

WHERE TO WATCH SUNSET

Pura Luhur Tanah Lot Temple: The grounds surrounding this temple built on a gigantic rock are underwater during high tide, creating a uniquely beautiful offshore scene, with the waves crashing against the ancient shrine’s peaks outlined by a piercing violet sky. Just look at the picture below if you think I’m exaggerating. Find a spot at one of the many cafés overlooking the water, order a Bintang Radler, and watch the kaleidoscopic heavens.

Uluwatu Temple: Arrive an hour or so before sunset to enjoy the views from this temple on a cliff before settling in for a traditional Kecak dance performance. Eighty shirtless men chanting in unison for two hours makes for a unique scene, but no one will judge you if you don’t make it to the end. This temple is also run by monkeys, so keep your sunglasses and babies close.

The Lawn: A hipster enclave in Canguu, this cool surfer’s hang is a boho queen’s haven. Think tasseled cream umbrellas with rattan cushions; woven mats covering a great lawn; and an infinity pool crashing into the beach ahead of you, giving you front-row seats to the greatest creamsicle sunset you have ever seen.

A portion of the flight and hotel was paid for by The Mulia, Mulia Resort & Villas. All opinions are the editor’s own.