The Real Girl's Guide to Tidying Up, Sort Of

We have committed (and recommitted) to KonMari’ing our home on many occasions. There were countless hours spent fantasizing the kind of minimal haven it will be once we’re done. Imagined images of a bed with nothing stored underneath and a closet that’s not bursting at the seams danced through our heads. But, here’s the truth. We haven’t gotten around to it… yet.

First things first, we love Marie Kondo just as much as the next person. Her books, "Spark Joy" and "The Life-Changing Magic of Tidying Up" are illustrated bibles for the type A personality—veritable godsends that promise to banish clutter from our lives forever. However, sadly, the book has just been sitting on our shelf—menacing us with a looming to-do list that looks too scary to tackle.

Author Jennifer McCartney identified with our procrastination-pain and recently came out with a book of her own. "The Joy of Leaving Your Sh*t All Over the Place" hit shelves in 2016 as a polite, hilarious rebuttal that extolled the art of being a slob. While we were tempted to cross over to McCartney’s dark side (we do already believe that messy people are smarter, after all), we decided that there had to be a middle ground. So, for all of you who are caught between a neat freak lifestyle and a sloppy situation, we dreamed up the perfect happy medium.

Raise your hand if you’ve ever felt guilty about not living up to Martha Stewart’s impossible organizational standards. We know we have. While we try to stay tidy most of the time, all it takes is a few busy days, and we come back to a home that looks like it was heavily burglarized. “Commit yourself to tidy up” is Marie Kondo’s first commandment. “Once you have made up your mind, all you need to do is apply the right method,” she says.

Jennifer McCartney, on the other hand, is of the school of thought that “normal people have enough to feel guilty about over the course of a day (climate change, not caring about climate change, leaving our cats behind while we’re at work)”—and clutter should not be one of them. Instead, she suggests to “reset your life by vowing never to tidy.”

The middle ground: Late-night panic attacks about our junk drawers should not prevent us from a peaceful sleep. But we don’t want to become the subject of a Hoarders episode. Accept that you’re human, and be realistic about how much time you have to devote to tidying up each week (or each month—no judgment). Once you get on a realistic schedule, stick to it.

“Imagine your ideal lifestyle,” says Kondo. “If you like drawing, sketch out what it looks like. If you prefer to write, describe it in a notebook.” Ours starts by not living in a studio apartment where even an innocent pair of socks is clutter that could quickly escalate into a full-blown mountain of mayhem.

Instead, McCartney suggests you stop playing the clutter blame game. “Throwing out all of your belongings isn’t a viable way to properly be alive,” she says. And she has a point. Should we throw out all our suitcases and vow never to travel just because we have no space for them? Is it reasonable to quit golfing/skiing/cycling if we can’t fit our sports equipment in our home? Probably not.

The middle ground: You know you have a bunch of junk that isn’t necessary to your survival—or things that you keep “just in case.” So while you may not want to get rid of your tennis rackets just yet or you don’t quite feel like calling your cousin next time you need a screwdriver, some things just don’t serve a purpose. Surely there is a blender in the cupboards that’s never been used or a collection of Christmas cards that could be donated or thrown out. If it feels like a mistake purchase or accumulating junk, it probably is.

“Finish discarding first,” says Kondo. “One characteristic of people who never seem to finish tidying up is that they attempt to store everything without getting rid of anything.” The goal instead is to consider storage solutions to be temporary while discarding, without worrying about where things will go. This makes perfect sense.

“Leave your sh*t all over the house,” says McCartney. “Even if you got rid of 90% of your belongings, your house isn’t going to be ‘clean’ or tidy.” This is true as well—if you’re a slob at heart, getting rid of your stuff will not make your space any tidier.

The middle ground: Follow Kondo’s advice and start discarding the unnecessary (this really can’t hurt), but also take simple steps to lead a tidier life every day. Simple steps like immediately rehanging items you just wore or cleaning as you cook will make your life more organized and streamlined without having to donate your entire life’s worth of accumulated stuff.

Kondo suggests tidying up by category, not by location. The latter approach doesn’t work, “because people think they have tidied up when, in fact, they have only shuffled their things around from one location to another or scattered items in the same category around the house, making it impossible to get an accurate grasp of the volume of things they actually own.”

Conversely, McCartney says, “If you’re not messy in every area of your life, you’re missing an opportunity to be lazier.” She has a point. After a long day of work, we’d much rather binge on Netflix and eat Seamless sushi than start organizing our kitchenware. After all, at least one study says it’s counterproductive to work more than 55 hours per week—and that includes chores!﻿﻿

The middle ground: Call a friend, set the mood—a bottle of wine, your favorite sushi, a great playlist—and make decluttering a fun activity as opposed to a boring chore. Picture Carrie Bradshaw when she threw her “keep, toss, or donate” party.

Kondo suggests that there is a correct order to decluttering: clothes, books, papers, komono (which represents miscellaneous items), and sentimental items at the end. Komono is an umbrella for anything from stationery supplies and medicine to recreational items, electronics, bedding, and valuables. Sounds like Kondo got lazy herself with that category…

Instead, McCartney suggests “leaving some sh*t outside and in cyberspace” because there is not enough time in a day (or a year) to spend waking hours decluttering. “HGTV recommends scheduling an hour of your week to declutter your closet,” she says. “I love you, five-hour HGTV marathons, but don’t tell me what to do.”

The middle ground: Read through steps one through four and remember you have a life outside decluttering and that it’s worth living. If Kondo’s method sounds overwhelming, that’s probably because it is. Read her book, take her tips, but go at your own pace and make it fun by throwing KonMari parties. If you still have friends attending your dinners once you’re done, kudos to you.

“Ask yourself if it sparks joy” is probably Kondo’s most well-known tagline. It’s something that you should ask yourself with every single item in your house. “When deciding, it’s important to touch it, and by that, I mean holding it firmly in both hands as if communicating with it,” she says. “Pay close attention to how your body responds when you do this.” Okay.

Instead, McCartney says “cherish your stuff, but do not hoard.” This seems more achievable. “Do you have time to empty your purse every day, fold it, place it on a shelf, and thank it for its service?” We don’t.

The middle ground: You might feel sad to get rid of your first S.O.’s ratty T-shirt—it’s normal—but no one else will. Keep in mind that just like breakups, sadness is only temporary, and it’s better to rip off the Band-Aid sooner than later. After all, “out of sight, out of mind” isn’t a popular motto for nothing. Keep that in mind while going through your souvenirs.

Who do you side with when decluttering is concerned? Are you more of a KonMari adept or a glorified slob? 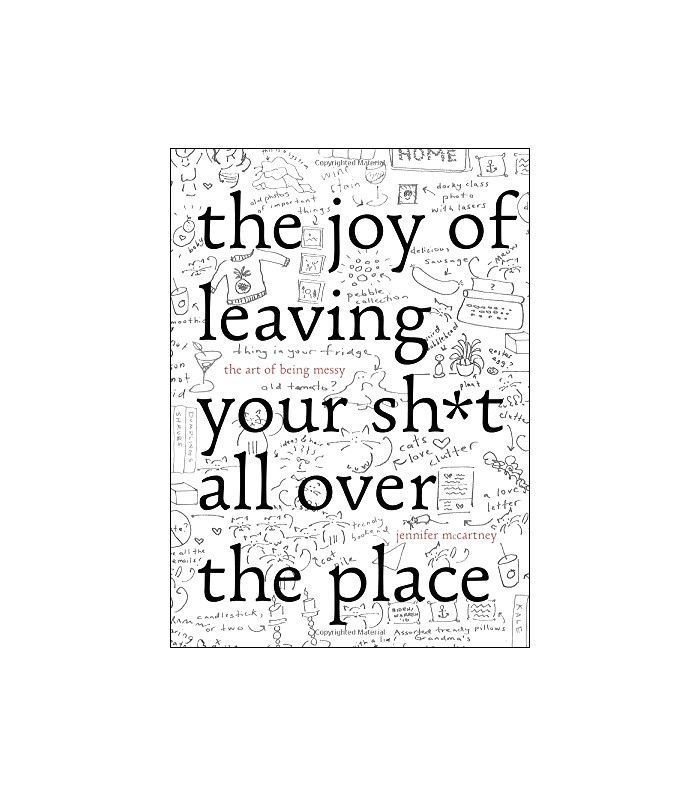 Countryman Press The Joy of Leaving Your Sh*t All Over the Place by Jennifer McCartney $11
Shop
10 Incredible Closet Makeovers to Copy in Your Home
Article Sources
MyDomaine uses only high-quality, trusted sources, including peer-reviewed studies, to support the facts within our articles. Read our editorial guidelines to learn more about how we keep our content accurate, reliable and trustworthy.