The Duality of Interior Design TikTok: Accessibility and Consumption 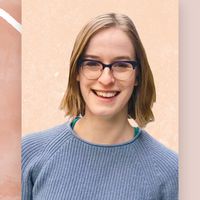 Emma Glubiak
Emma is the Senior Social Media Editor for MyDomaine and The Spruce. Prior to joining Dotdash, she was the Social Media Manager at Apartment Therapy and has written for PureWow, Spoon University, The Kitchn, and PUNCH.
MyDomaine's Editorial Guidelines

You don’t have to be famous to go viral on TikTok. Unlike other social media platforms, where your following is everything, TikTok’s format means that someone with just one hundred followers can post a video that gets one million views. You scroll through your “For You Page” (FYP) and you'll find it not only occupied by celebrities or verified brands, but largely filled with content created by regular people from their regular looking homes. This creates a magic little corner of the internet in which a home chef has the same odds of going viral as a famous TV cooking personality. There are few spaces in which this is more relevant than in the world of interior design.

TikTok has made interior design more accessible and diverse than ever before. Creators without design degrees or celebrity clientele are gaining traction by giving easy to follow tips and thoughts on design trends that feel accessible to the masses. Having a “well-designed” home is suddenly framed as attainable. But at the same time, this cycle of constant virality on TikTok is causing trends to come and go at a pace we have never seen before, which has caused a massive contradiction. There is wide accessibility of information, but in order to keep up with trends you’d need to be consuming at a rate that is anything but accessible.

Interior design has never been inclusive. Hiring an interior designer is expensive and largely unattainable for the average person decorating a home. Typical rates for a designer start at around $150-300 per hour, which for someone making federal minimum wage in the US would amount to at least half of their weekly pre-tax income for just one hour of design work. This means that those who traditionally had “well-designed” homes were those who could afford to.

Beyond prohibitive costs, there's also the fact that BIPOC designers are not often given the same opportunities as their white counterparts in the design world. Those who historically found success in the industry were an incredibly homogenous group. “I’m not sure it has been an issue of white gatekeepers,” explained Amylynn Schwartzbard, one of the founders of the Kaleidoscope Project, an organization whose goal is uplifting BIPOC interior designers. “It has been more of the lack of exposure that our creative and diverse BIPOC designers were not getting. And our white designers were not extending their hand to pull them in. That is changing.”

Social media has made it so that you can get interior design advice without having to pay for it, and designers can gain exposure without a professional PR team. According to Schwartzbard, social media has been a driving force in exposing BIPOC designers to bigger audiences.

Interior design on social media isn’t new. Pinterest is ten years old and is rife with interior design ideas, advice, and inspiration. But Pinterest is about the content, not the personality behind the content. It is essentially a search engine, which means your content does well if it surfaces in other people’s searches. The user doesn’t care about who you are, they care about whether or not your advice on how to hang a gallery wall is useful to them. Instagram, which also launched about a decade ago, is more personal. You follow people who interest you and it is their content that you engage with in your feed. Instagram is entirely based on personality, your following is everything. Celebrities who are famous outside of their social media presences, like Cristiano Ronaldo and Ariana Grande, dominate in terms of followers.

TikTok is the opposite. It is neither a search engine nor a traditional social media feed. Your main feed is not made up of people you follow or are “friends” with. Instead, you're greeted with content that the algorithm decides to feed you. Charli D’Amelio, the most-followed person on TikTok, is not a celebrity in the traditional sense, but a person who became famous because of TikTok.

Because of this, TikTok has a unique way of exposing people to things they didn’t even know they wanted. “There are so many great DIYs and ideas out there that no one even knew to look for before—but with TikTok, it is presented to you via the For You Page instead of having to go searching for it,” Chelsea Scott of @interiordesigndropout explained. True to her handle, she started her college education as an interior design major, but switched to visual merchandising before going on to get an MBA. Interior design was just something she was interested in on the side for a long time. Like many people, her love of home décor was reignited in 2020, so she started posting about her DIY projects and her following took off from there. Her followers love how doable her projects are.

Cindi Yang has a similar story. She started posting on social media about three years ago when she bought her home and the response was hugely positive. She is not a professional designer, she simply started posting DIY tricks and design tips before more and more people started to turn to her for help. “[TikTok] spreads the notion that a lot can be done on a budget,” she said. Yang and Scott are two examples of “non-professional” figures in design who have made a space for themselves sharing simple tips and advice.

I personally learned the power of making interior design content feel easy and accessible while running the TikTok for MyDomaine’s sister-site, The Spruce. Our first video that really resonated with viewers was about the 60-30-10 rule, a design rule that helps balance color in a space.

“Finally something I understand with décor,” was the top comment on the video. Which goes to show that before having an easily quantifiable piece of bite-sized advice, many viewers felt overwhelmed by design. Since then, whenever we post an easy to understand design “rule” on The Spruce, the response is positive. People like having simple, quick guidelines to make their space feel right. TikTok is inherently an ideal fit for that kind of content.

Another benefit in terms of access is that TikTok is teaching consumers how to describe their style. “Access to these trends and aesthetics means more interior designer verbiage is entering our vernacular,” Cassandra Gagnon, a Lifestyle and Interiors Analyst at WGSN, a trend forecasting company, explained. Suddenly, people are able to understand how to explain and describe their likes and dislikes in actual interior design terms. The hashtag “mid-century modern” has over 100 million views. “Art deco style,” has 50 million. Newcomers to design are able to hone in on these accurate descriptors of style unlike ever before.

However, the kinds of videos that naturally do well on TikTok have also caused an acceleration of the interior trend cycle. One TikTok user, Sophie Graf of @designwithsophie, made a video explaining the negative impact that this culture of quantifying what is “in” or “out” has caused. She compared the resulting trend cycle in home décor to fast fashion, stating, “when we create a culture of telling people what’s trendy or what’s not trendy… we’re encouraging a culture where people are constantly re-doing their homes.”

Graf started her TikTok in March 2021 and she immediately noticed that many videos in the interior design space were placing “worth-based” value on certain trends or even specific items in the home. This essentially causes the viewer to feel ashamed if they are not on trend in their home and the result is one of two things: they either purchase something that will help them feel on trend, which is not sustainable, or they have to live with that shame because they aren’t able to afford whatever the trend is. Both results perpetuate these dangerous cycles.

This isn’t just speculation. According to WGSN, there is evidence of an increased demand for actual purchases for the home from TikTok. “The amount of content users are able to consume in a short bit of time means more opportunity for interacting with trending products, aesthetics, and item types,” Gangon explained. The short form nature of TikTok means you might see hundreds of products in just an hour of scrolling, and your likelihood of buying is therefore much higher than on other platforms.

The solution, Graf said, is to soften the language of these videos. The goal should be for viewers to learn what their own likes and dislikes are so that they can curate a home that isn’t so of the moment. Finding a personal style should be the endgame for this content. Both Gangon and Graf pointed to thrifting as a possible antidote to fast furniture.

Another solution is to purchase new furniture, with the intention to keep it for a long time. “I don’t think it is wrong to buy new either,” Graf said, “as long as you are buying with the intention of this being a longstanding piece in your home.” In order to purchase something long standing, you need to be acutely aware of your personal style.

One easy way to help define your style? Scroll through your FYP for a few hours and see what speaks to you. And therein lies the precarious value of interior design TikTok.