Months Later, My Favorite Towels are Just as Fluffy as the Day I Got Them

There’s nothing like going to a hotel or spa, drawing a warm bath and then wrapping yourself up in a luxurious, fluffy towel. Wouldn’t it be nice to do that at home? After all, a fluffy towel should be a daily indulgence and not just an occasional treat.

But, getting towels to keep their fluff can feel like a lost cause. Sure, you can use fabric softener, but if you’re sensitive to chemicals like I am, it’s a hard no. Luckily, I’ve found a way to win the towel game.

Enter Weezie, a startup that recently celebrated its first year in business. Weezie towels truly keep their fluff. I’m not just saying this. I’ve been drying off with my set since the spring and they’ve stayed perfectly fluffy ever since.

The Great Search For Fluff

The brand was founded by Liz Eichholz and Lindsey Johnson, friends who understood that the struggle to find the perfect towel was real. After trying tons of towels, they came up dry and asked themselves why nothing was up to fluff.

They ended up spending over a year traveling all around the world to textile conventions, until they came up with the Holy Grail. Made in a family-owned factory in Portugal using 100% organic long staple cotton, Weezie towels are OEKO-TEX certified. This certification is very important because it means they haven’t been treated with harmful chemicals.

Look for towels and other textiles with OEKO-TEX certification, which means they are free from harmful chemicals and synthetics, and safe for human use.

If you’ve ever wondered why your towels feel so soft and fluffy in the store and never stay that way, it’s because they’re chemically treated. Weezie towels stay soft because of the weave of the cotton, which traps air into every single fiber, creating a cloud-like pocket.

“Our mills use a patented Japanese spinning technology that infuses air into every single fiber. Air pockets are created in the yarn to allow for maximum absorbency, but also maximum fluffiness. The best part? Every time you wash the towel, the air pockets expand, making them fluffier and fluffier with each wash,” says Johnson.

Another great thing about these towels is that they have a hidden loop in the edging, so they actually dry when you hang them. After all, nothing feels less fresh than trying to dry off with a damp towel. 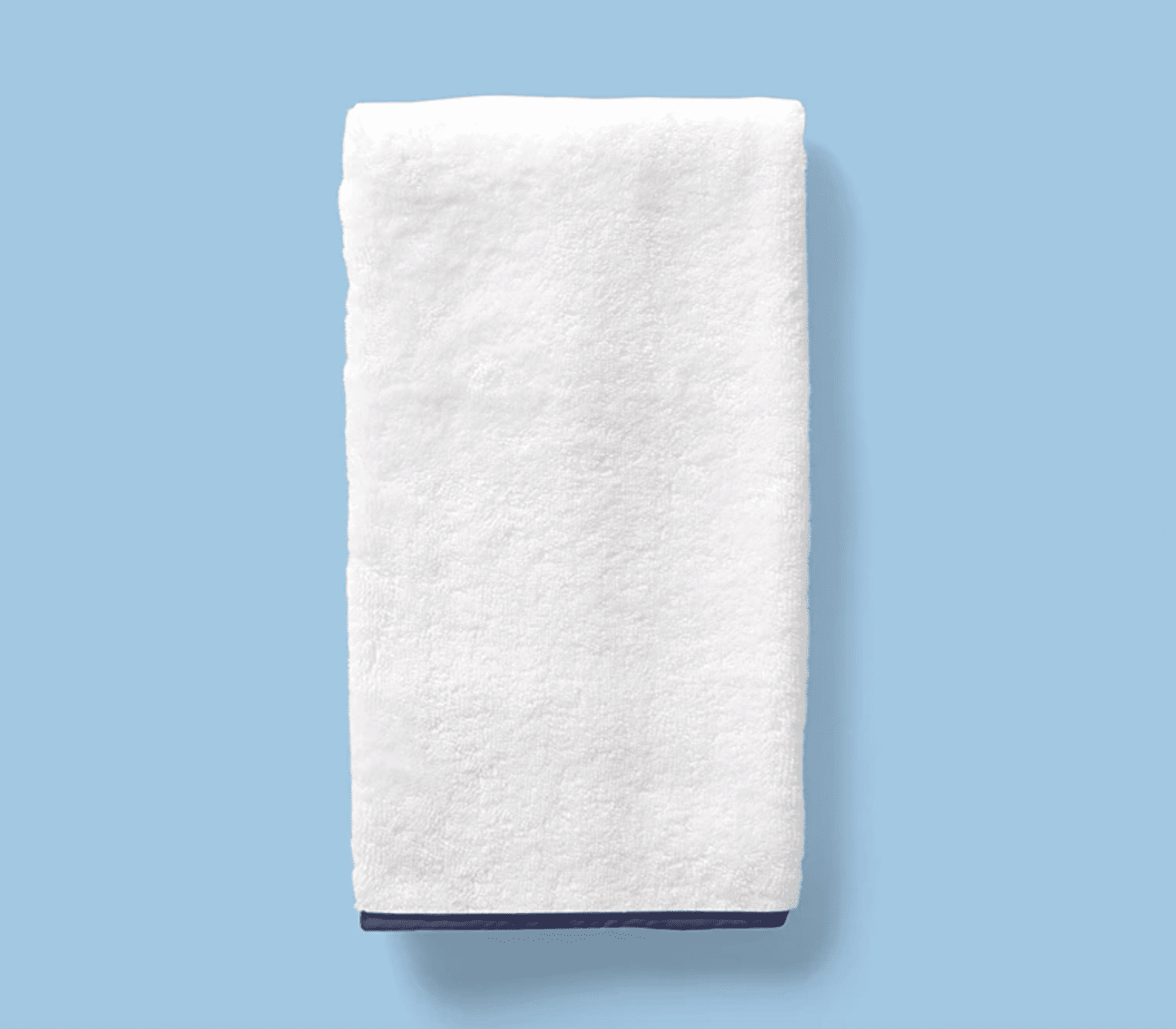 While any premium towel can be monogrammed, Weezie has upped the game. There are nine different thread color options for the brand’s signature piped edge: white, black, pink, navy, tangerine, light blue, gray, sand, or green.

In September, Weezie launched a stitched edge option, which has a cool, boho look to it. There are five thread choices for this style including bright pink, light blue, bright blue, grey and black. 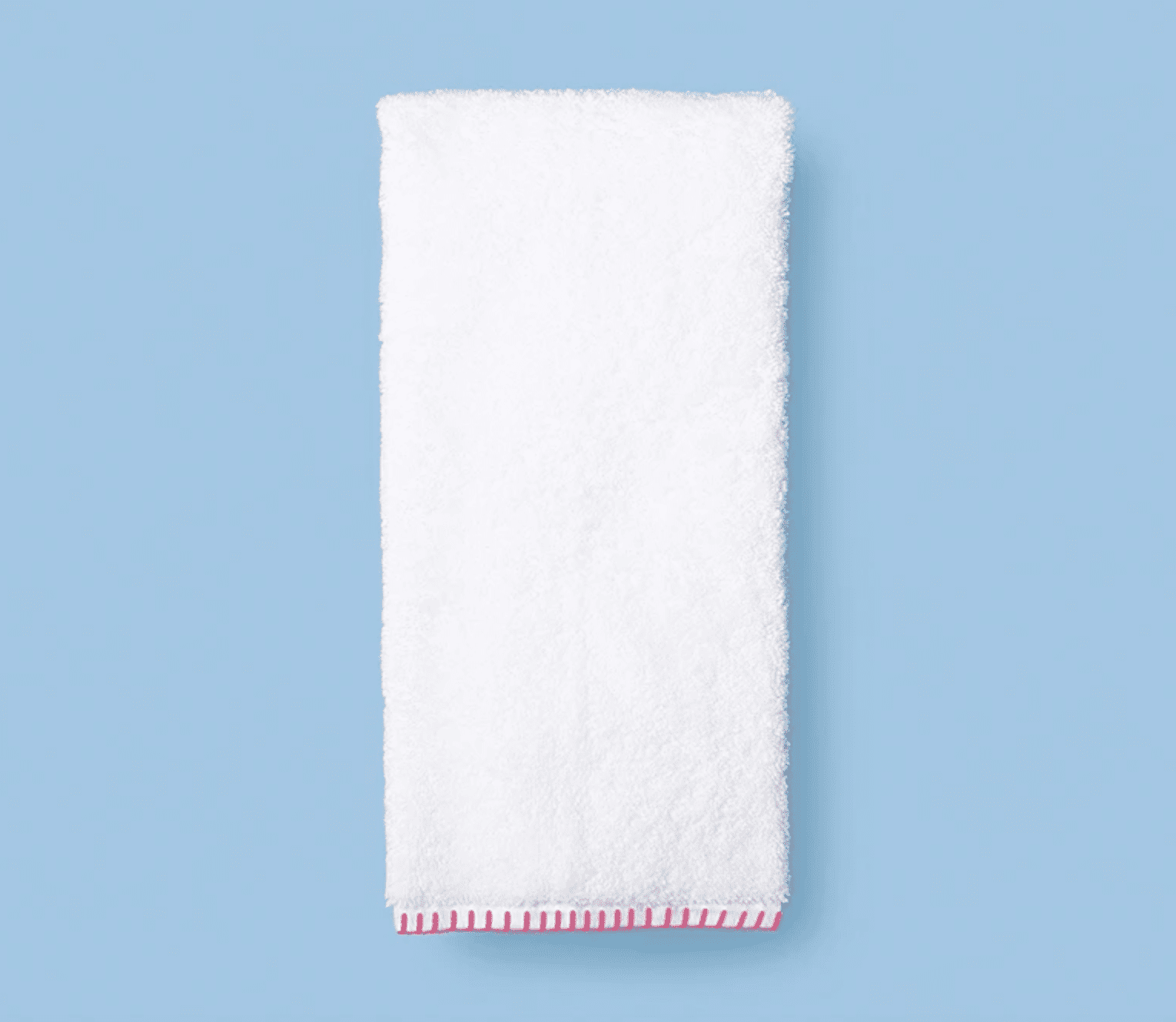 Weezie also offers seven different personalization styles. There are four monograms, a single block letter (if a whole monogram isn’t your thing) and two different fonts, should you want to embroider your whole name. Or consider getting fancy and spell out the name of your house, pet, nickname, etc.

While you can use the same edge and embroidery thread colors, I think choosing different ones gives your towel a truly unique look. I have a single block letter in tangerine with navy piping. While I initially felt this was a design risk, I’m more than happy with the results. 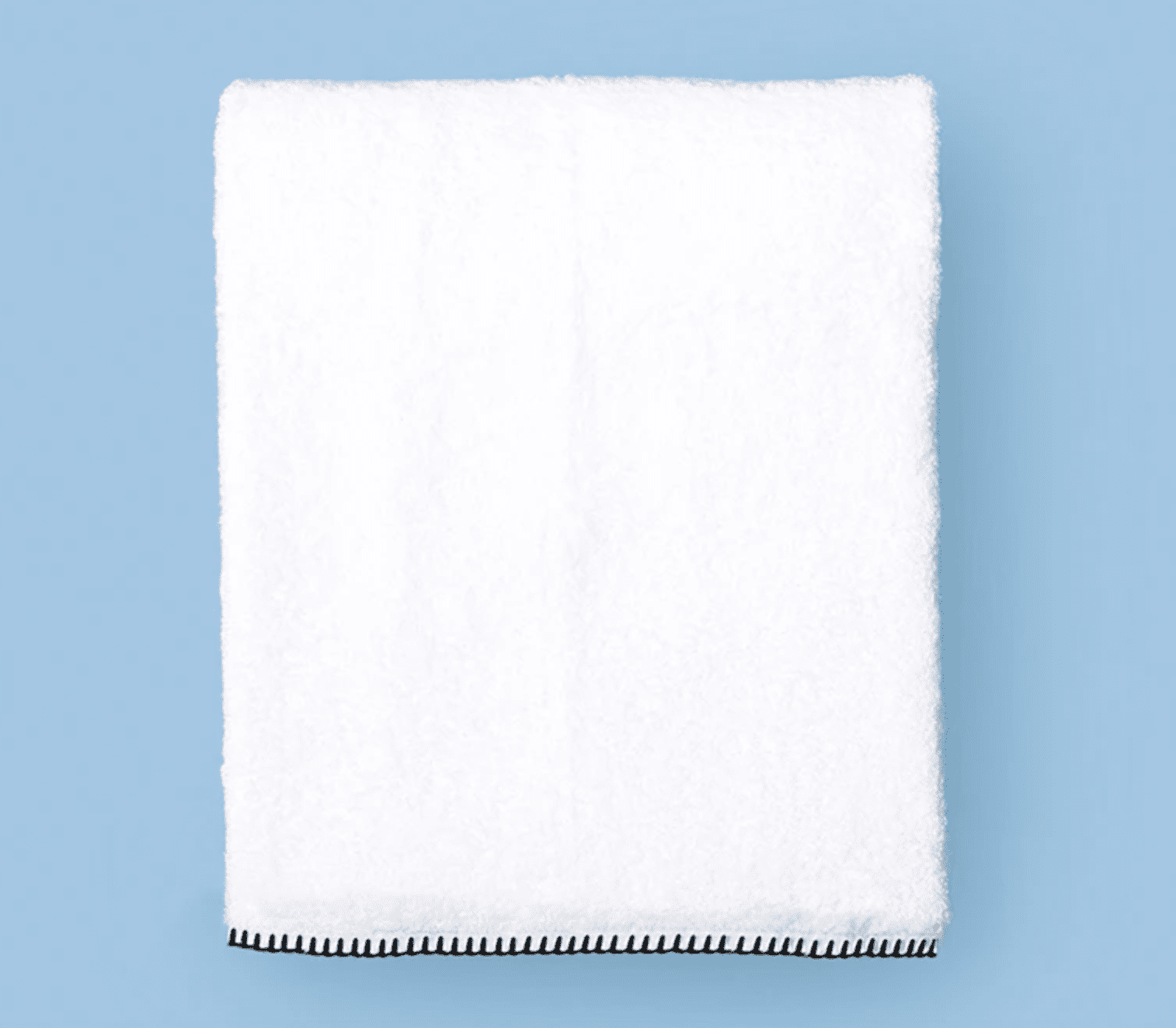 Weezie has both bath towels and bath sheets. Bath sheets are a nice way of saying, the biggest towels ever! At a whopping 40 x 70 inches, it’s easy to wrap yourself dry. However, the regular towels are generously sized at 30 X 58 inches.

They also have hand towels and washcloths. And if you don’t want to ruin the washcloths when you take off your makeup, there are navy makeup remover towels with a choice of eyelid, heart or Stain Me designs. You really can’t go wrong. 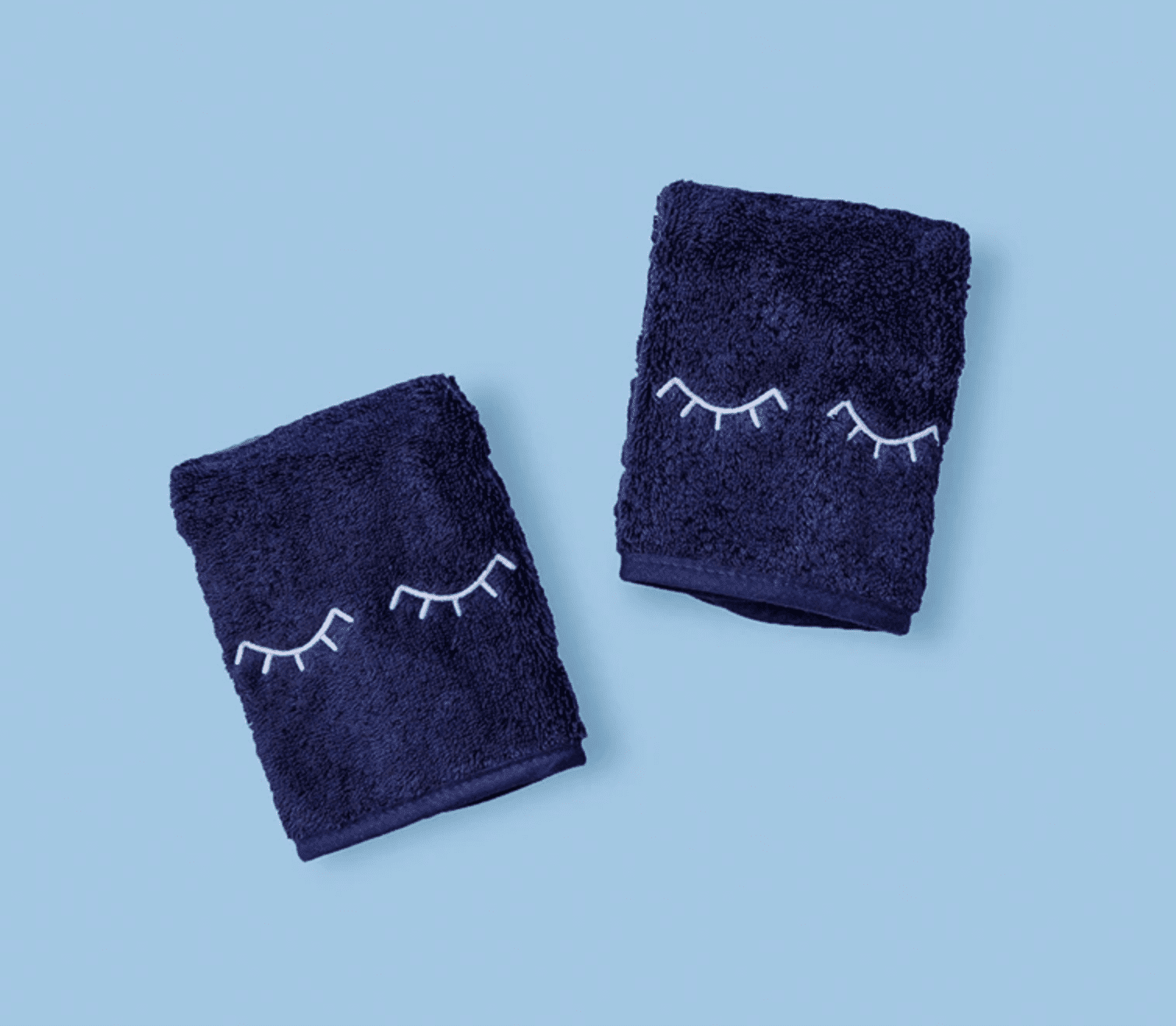 And while it’s not exactly that time of year, Weezie also has four different patterned beach towels to choose from. 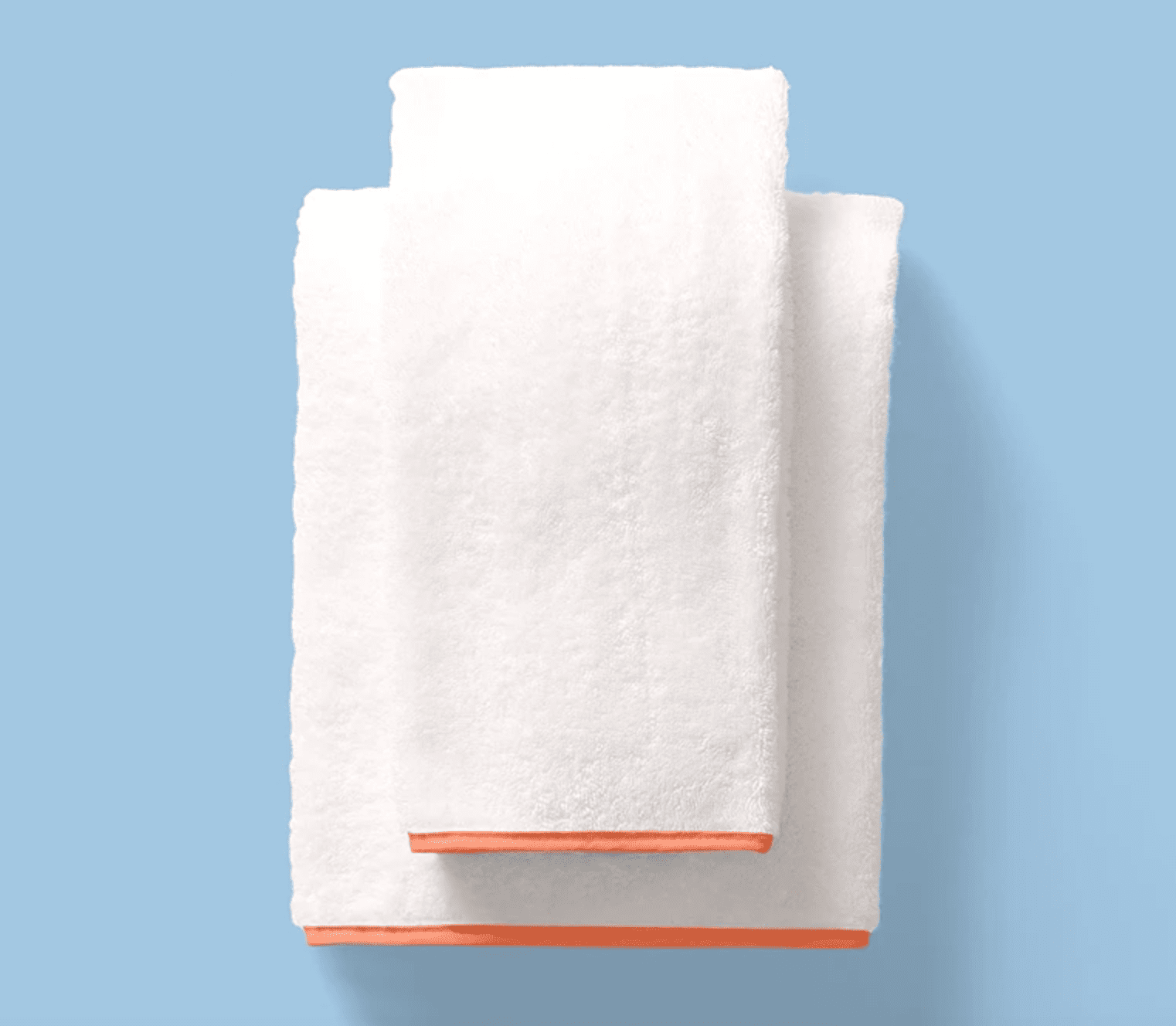 Weezie Starter Packs come with four bath towels and two hand towels because what good is just one towel? This is an ideal housewarming gift because everyone needs more towels. Unlike a special occasion serving platter or flowers that die, towels are used every day. 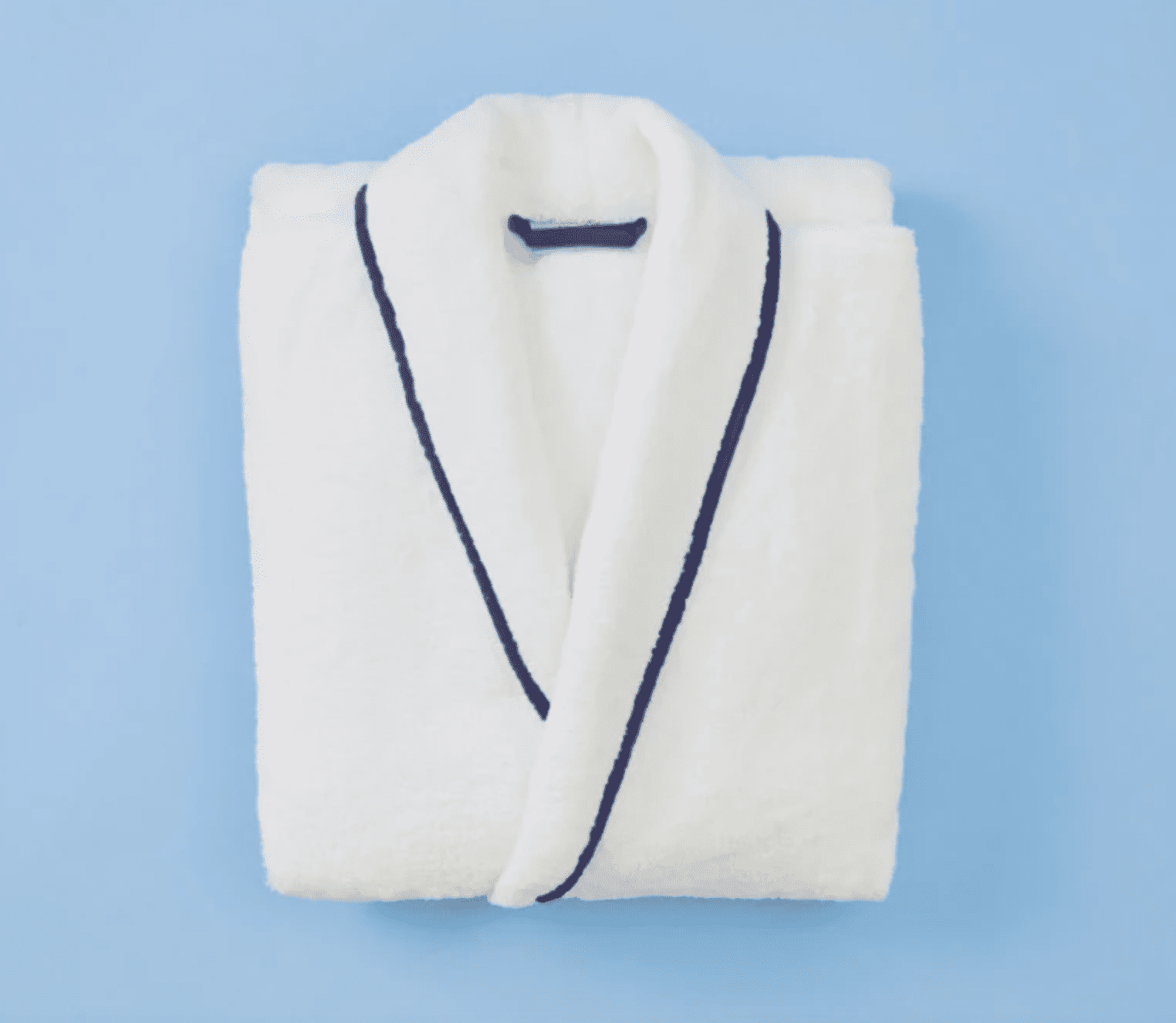 Weezie’s robes also make great gifts (there’s nothing wrong with gifting yourself either). Long and short options are available with white, navy or light blue piping. Printed robes are set to launch in 2020.

Up next: An Expert Shares the One Thing Every White Bathroom Needs