What's A Duvet Cover? All you Need to Know & The Best Ones To Buy Now

Does the phrase, "duvet cover" mean anything to you? If not, you're in the same boat as the roughly 33,000 other folks who Google what it is, along with its purpose, every month. So let's break it down, shall we?

The word “duvet” comes from the French phrase plumes en duvet, or down feathers, and its origin can be traced back to the 15th-century feather bed, which was composed of a closely-woven cotton ticking-fabric shell that trapped duck- and goose-feather fill inside. At that time, only the rich could afford one, but by the 19th century, anyone with a few geese or ducks could enjoy it just the same. By the late 20th century, the newly-minted duvet (basically just another feather bed on top of you) took foothold throughout Europe.

The duvet finally rose to bedding-staple status in 1970s England, when the British furniture designer, Sir Terence Conran, began schilling them from his iconic Habitat lifestyle shop (still in existence today) in London. Advertised as “the 10-second bed”—since you needn't use a top sheet with it—the duvet promised all-night warmth and lightning-fast bed making. Nowadays, a duvet—not to be confused with the less warm (typically quilted) comforter—is a soft down, feather, or synthetic fiber-filled bed topper that's warm enough for unadulterated use, unburdened by layers of top sheets, blankets, coverlets, and all the rest.

A duvet cover does for the duvet what a pillowcase does for a pillow: It protects a duvet from dust, dirt, and sweat. Today, duvets are considered mere inserts, meant to be sheathed by a zippered, tied, snap, or button-close duvet cover that can be switched out and laundered with relative ease (rather than having to schlep to the dry-cleaner every two weeks). But, the duvet cover serves a purely decorative purpose, too: Swapping one for another is a simple, quick, and affordable way to completely redecorate a bedroom. Plus, You’ll only need to wash a duvet cover about once per month, advises Boll & Branch, a popular luxury bedding company. Look for a cover that allows the duvet insert to lay flat and fit snugly inside; covers with interior corner ties, rubber buttons, and internal snaps help, too.

Yes, you absolutely can use a duvet cover on its own, but it's best to do so in summer months as a cover itself is thin, and doesn't provide much warmth. Think of the duvet cover as a bedspread, and feel free to layer it over additional sheets and/or blankets and launder as normal.

How To Put One On

At one time or another, we've all wrestled with our duvets—keeping one from bunching up inside its cover is a common annoyance. The following step-by-step directions will ensure yours stays in place. (More of a visual learner? No worries: Luxury bedding purveyor Crane & Canopy produced this helpful instructional video.)

The utility—and versatility—of the duvet cover cannot be understated. We've rounded up 10 lovely covers that run the gamut in style, fabric, and cost. Prices reflect full/queen sizes, unless otherwise noted. 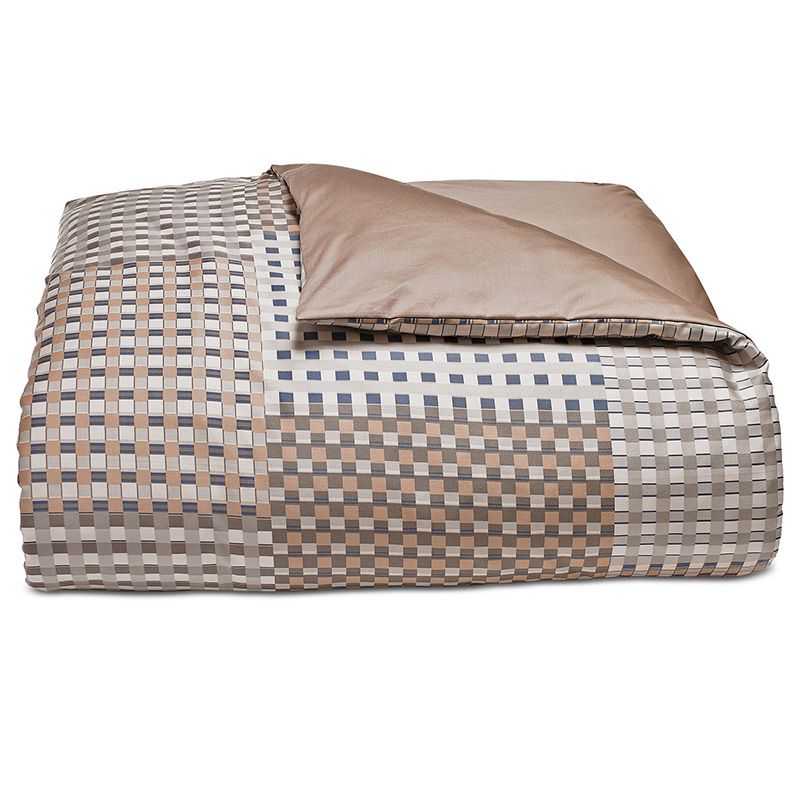 Macy's Hotel bedding is widely appreciated by interior designers who choose the brand for its top quality, high-end look (and feel), and relative affordability. This luxurious, cotton duvet cover's patchwork design is super-soft with a slight sheen. It's modern and isn't overly feminine, either—a boon if you're currently cohabitating. 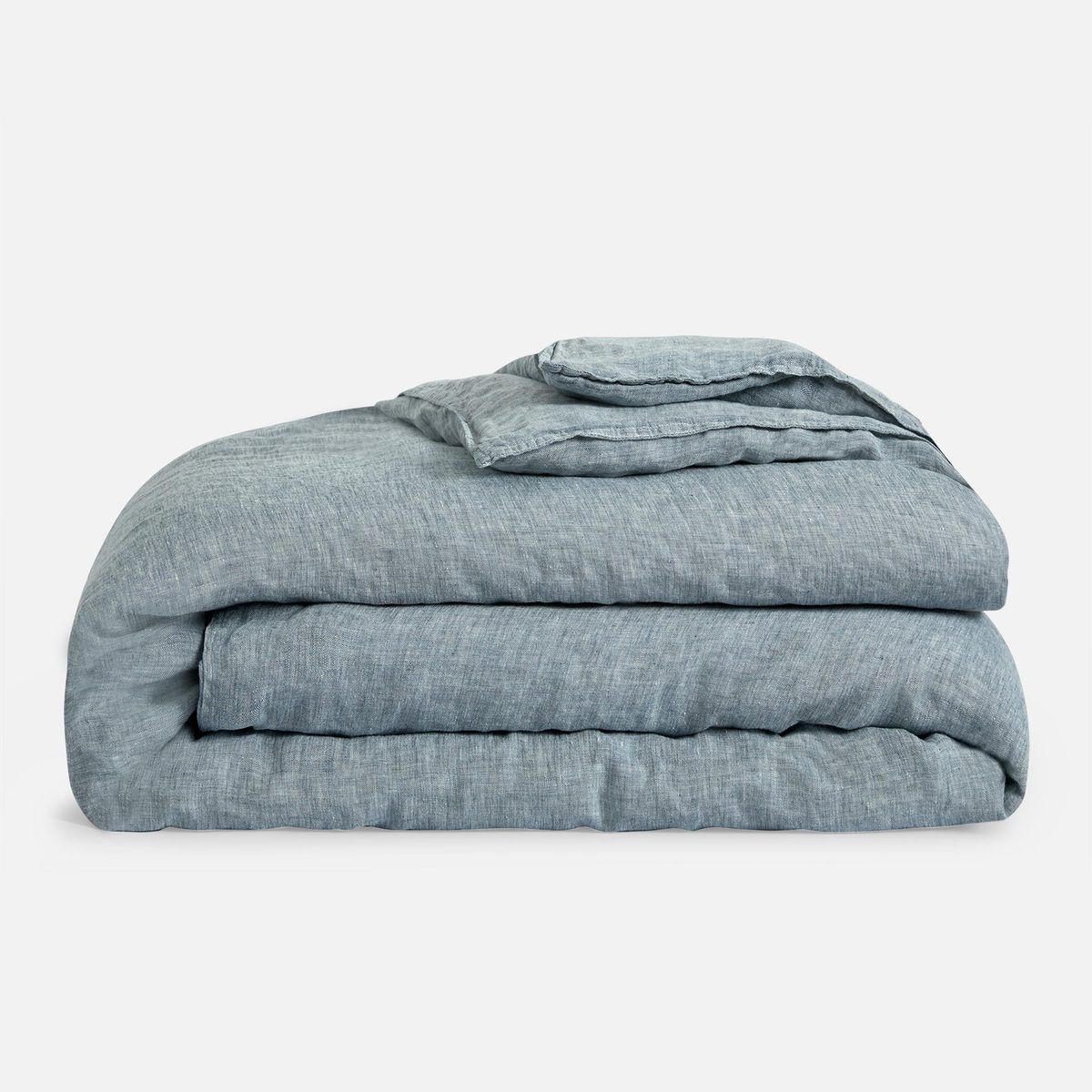 Linen bedding is sublimely breathable and is actually twice as durable as cotton. And if your goal is to create an effortless messy-bed look, linen is the way to go. Contrary to popular belief, linen bedding is also easy to care for, too. This 100% linen cover features long, strong corner ties and large buttons designed to keep a duvet from moving around inside it. 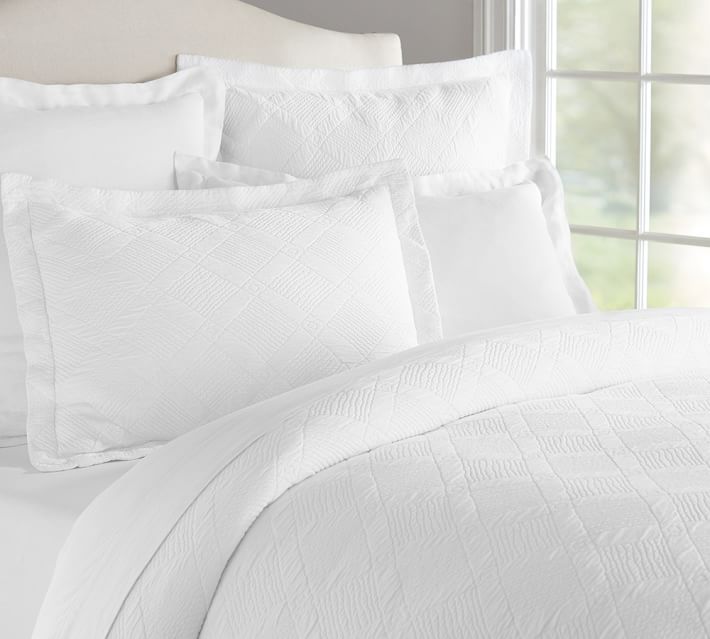 The term matelassé (pronounced mat-le-say) indicates a textured or lined, cotton-weave fabric that often resembles a hand-stitched quilt. This 100% cotton cover, while thicker than a standard cotton one, is still super-soft and breathable and features a button closure. 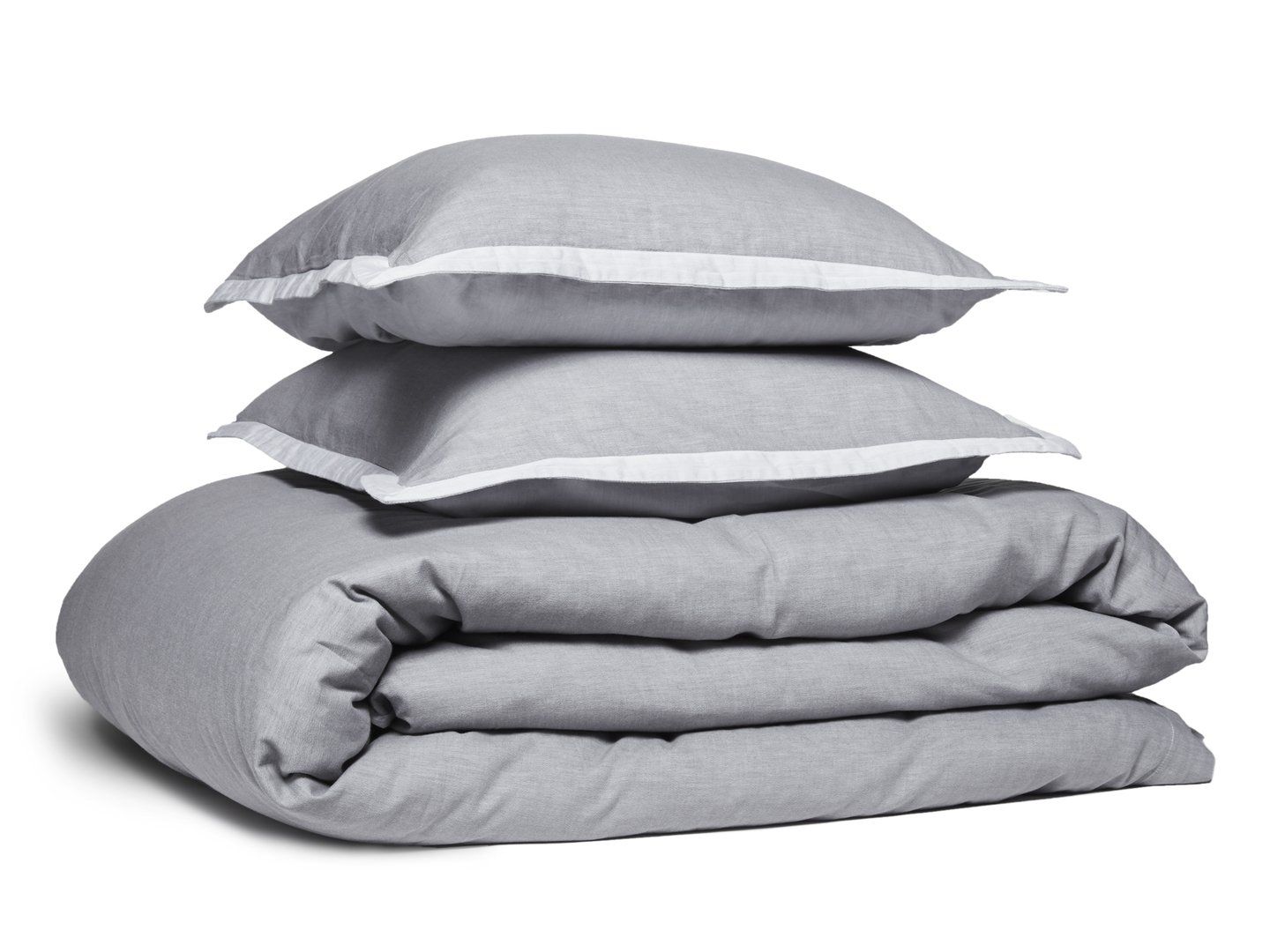 Think of sateen as a thicker, higher-end cotton weave that's silkier and softer than a plain or standard weave option, with a nice sheen to boot. And when it comes to cotton, length equals strength: This washed-sateen cover is composed of long-staple cotton, which frays, wrinkles, and fades less than short-staple versions. This cover is completely reversible and has twill ties that easily attach to duvet inserts, especially those with corner loops. Two matching standard shams with light-gray contrasting hems complete the look. 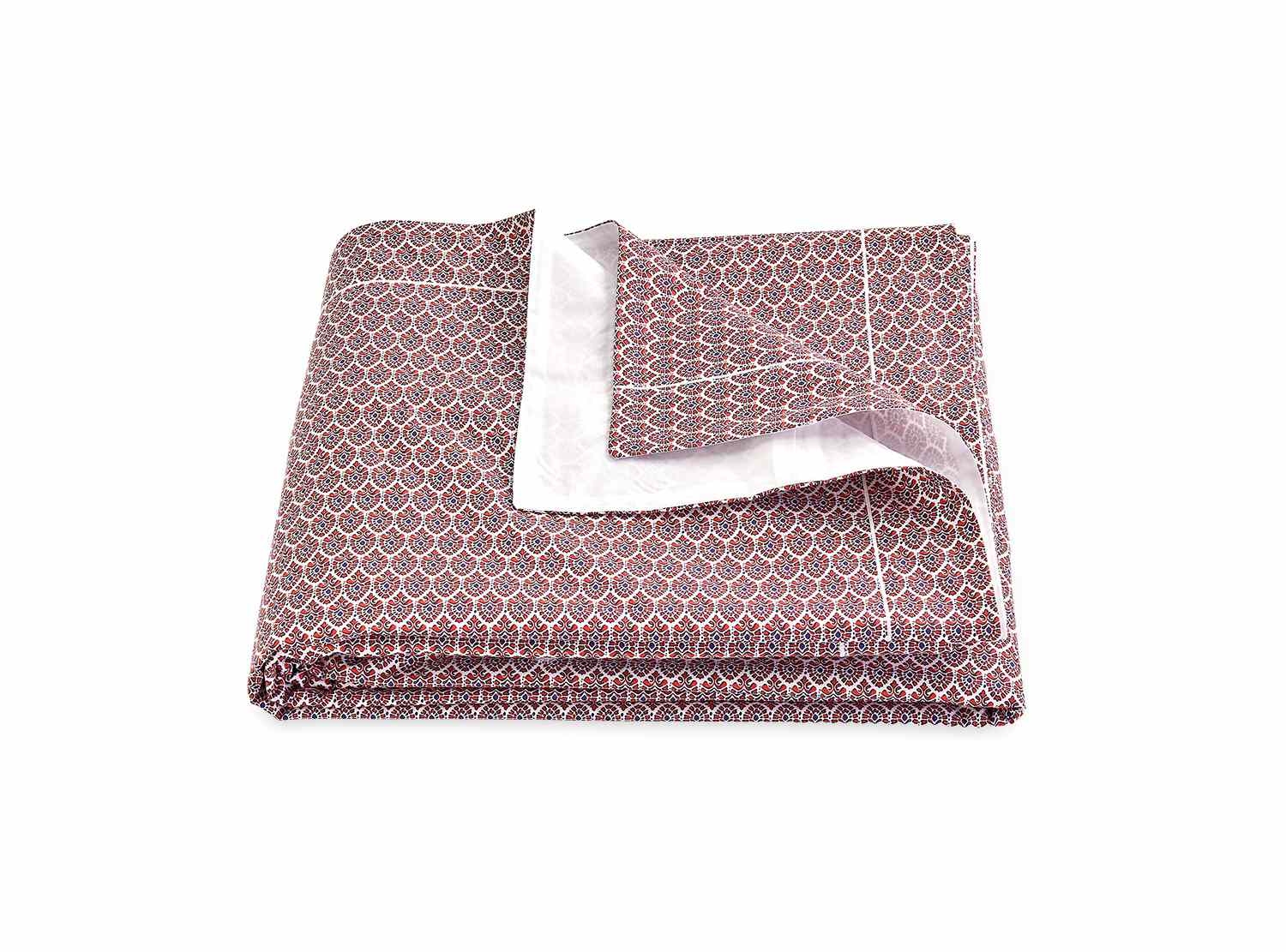 Unlike sateen, cotton percale is a slightly looser weave that produces a matte finish. While it's still very soft, percale bedding is light, smooth, and crisp (like shirting) and people, especially those who run hot even during winter months, love percale for its ability to stay cool. This percale duvet cover features a repeated, hand-drawn medallion print that resembles a regal coat of arms. 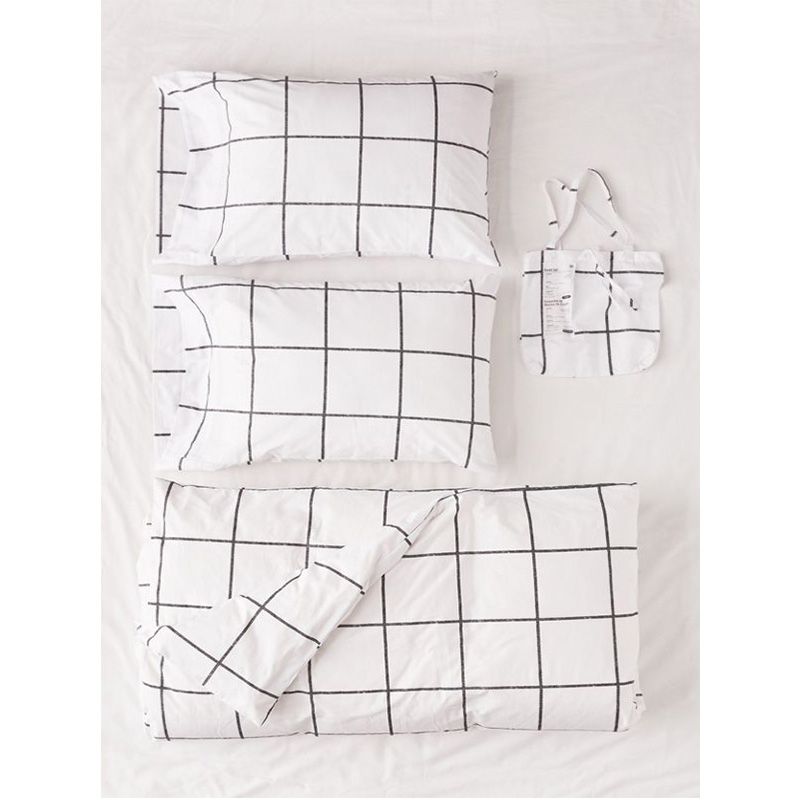 An ultra-affordable option that's perfect for a neutral bedroom, this soft cotton duvet cover is decorated with a unisex, faded-grid pattern throughout. Two matching pillowcases and a reusable tote further make this one a no-brainer. 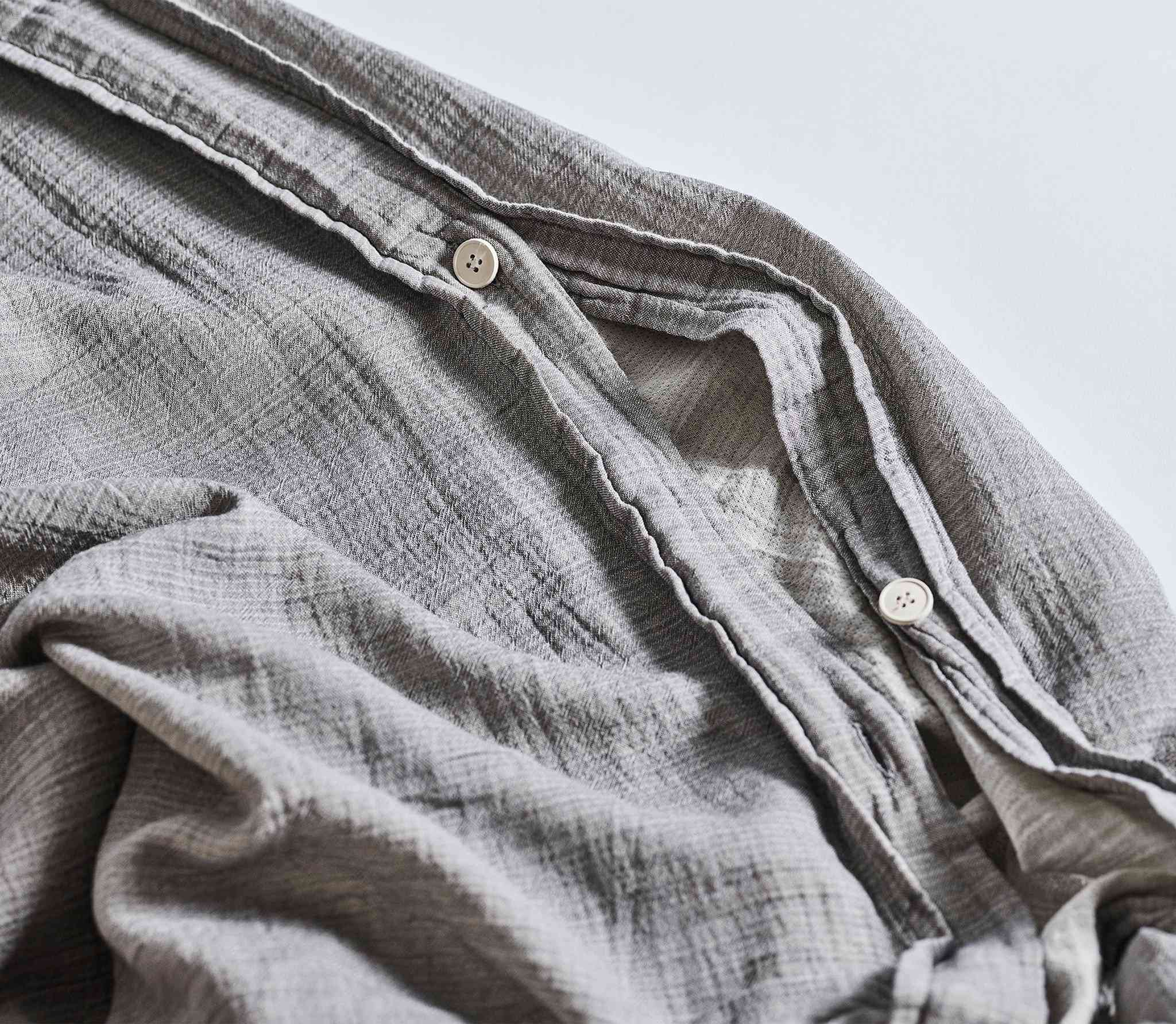 Snowe isn't an interior-design fave for no reason: The "elevated basics," Millennial-founded company has created a unique wash that transforms 100% long-staple cotton into a gorgeously textured, wrinkly fabric that's as soft as...well, you get it. Internal ties and rubber buttons will help keep that duvet in place. 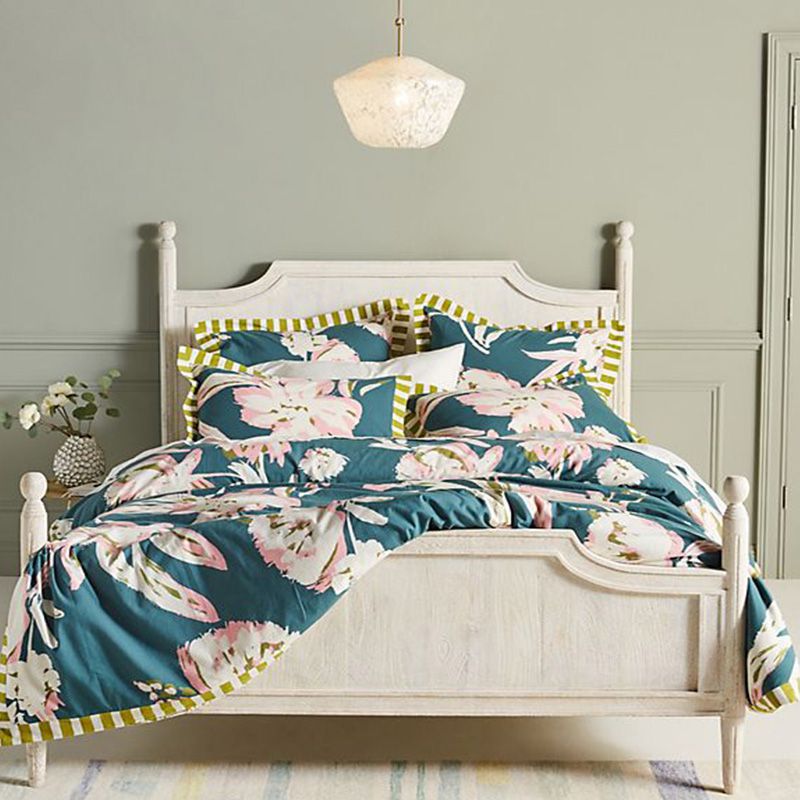 A taste of the tropics: This botanical-printed duvet cover is composed of slub cotton, which results in a slightly lumpy texture because it has been irregularly twisted before it is woven. It also has a button closure and comes with two standard shams with cute green tonal stripes. 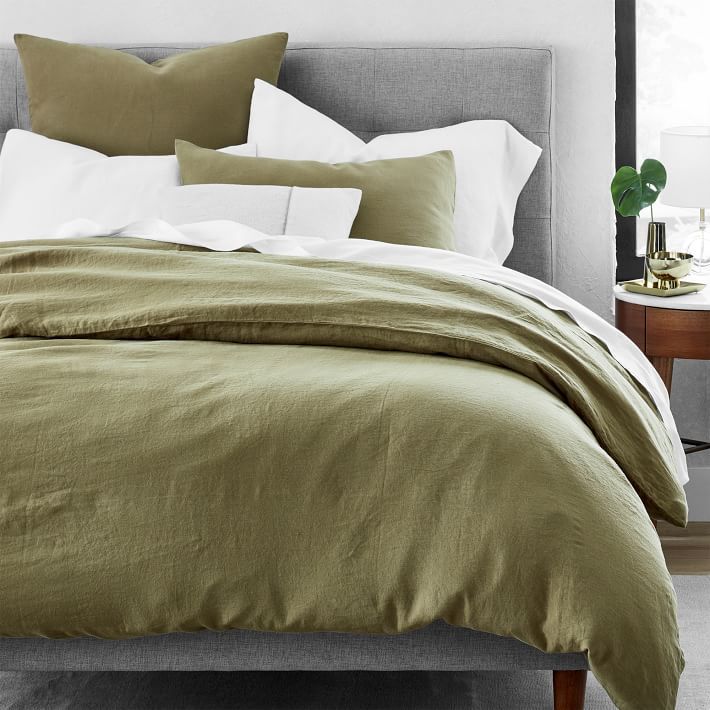 The climate and soil conditions in Europe make certain regions, specifically the areas between Cannes, France and Amsterdam, Netherlands (known as the "flax belt"), ripe for flax production. This Belgian flax duvet cover will only get softer with every wash. 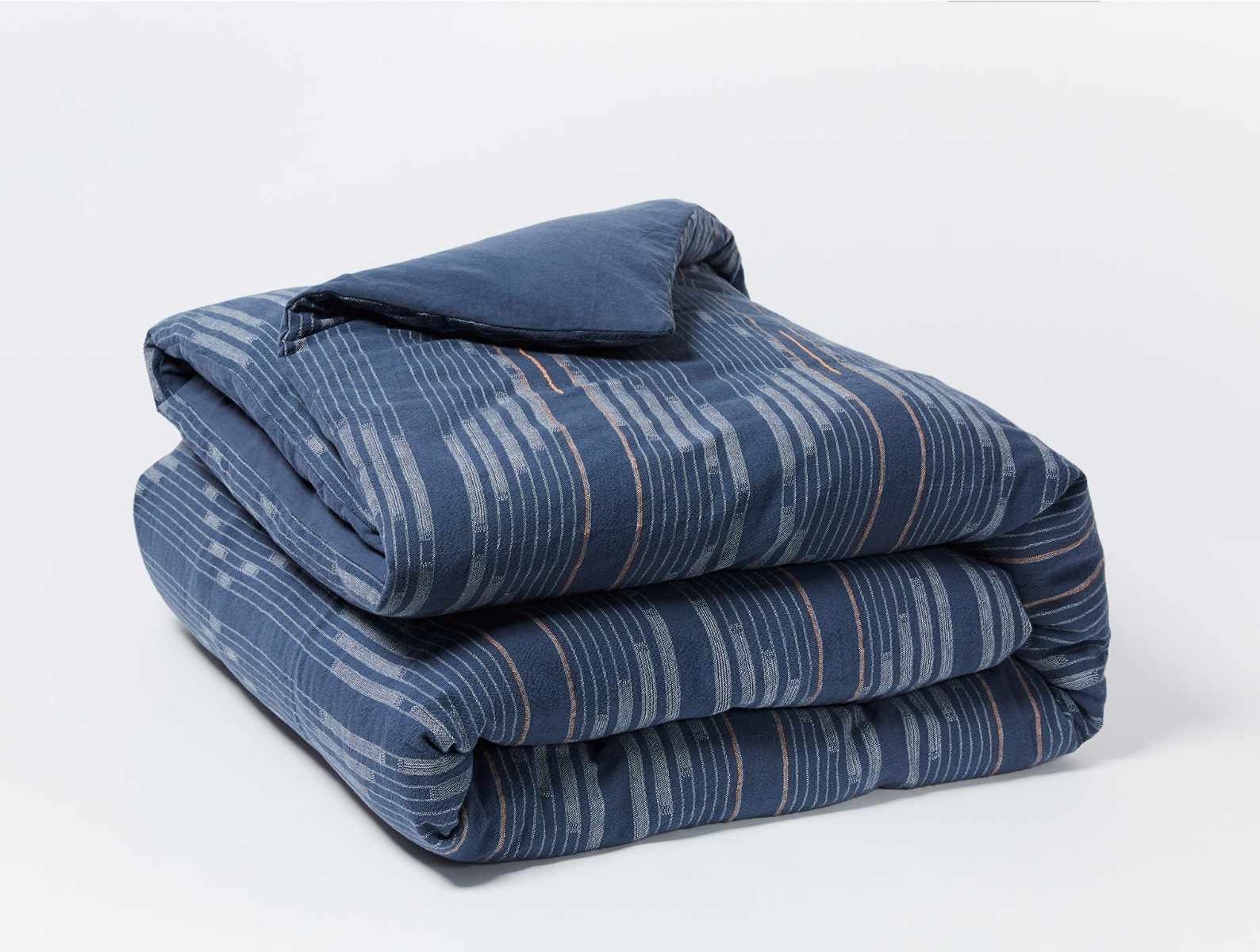 Inspired by an African ikat textile and composed of yarn-dyed (meaning: its fibers were dyed before being woven and look the same on the back and front of the fabric) organic cotton, this duvet cover gets its softness from being prewashed, and its texture from thicker pink-orange yarns woven into its vertical design. Coconut-shell buttons trap in duvets—and its handy tote bag can accompany you on trips to the farmer's market.